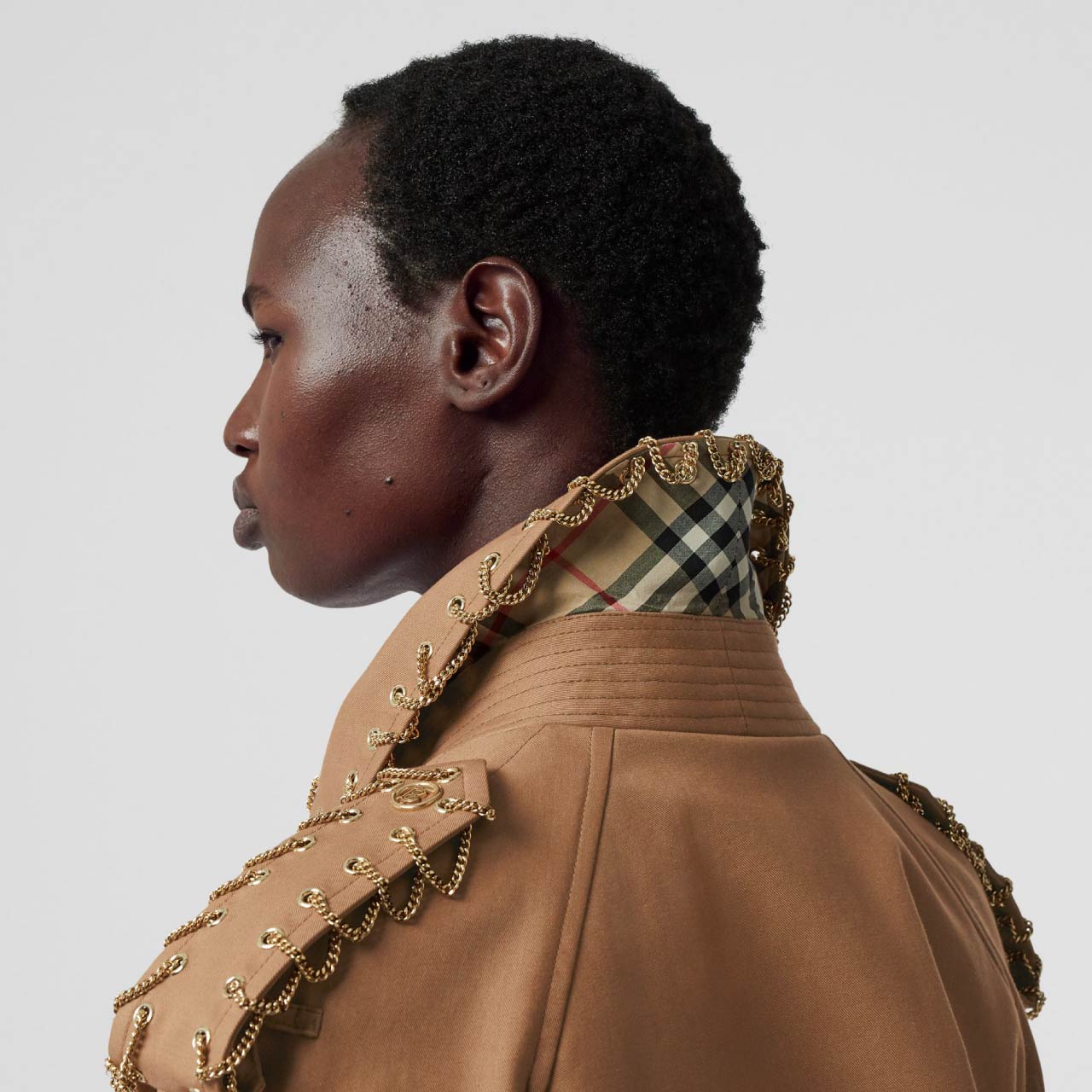 When designers take over a role as creative director of an established fashion house they are often faced with the decision of how much of the archive to take on board, and when to make a clean start on their own. For some designers though, the house is all about the archetype of a particular garment which is a bread and butter part of the fashion label’s income. Such is the case when you consider the position of someone like Riccardo Tisci going into Burberry, a brand synonymous with trench coats.

This puts the designer in a position where they need to develop a product category out along different tangents, potentially to appeal to different customers, markets and price points. While there is a core customer who wants classic trench details, there are other customers who want a trench design that is subverted or updated in some way.

In this article, there are some examples from Burberry of trench coats, that have retained some of the classic trench tropes as well as some new details that have been added in. Many of the designs are presented in both trench coat and car coat variations, so you will also see some car coat styles below. 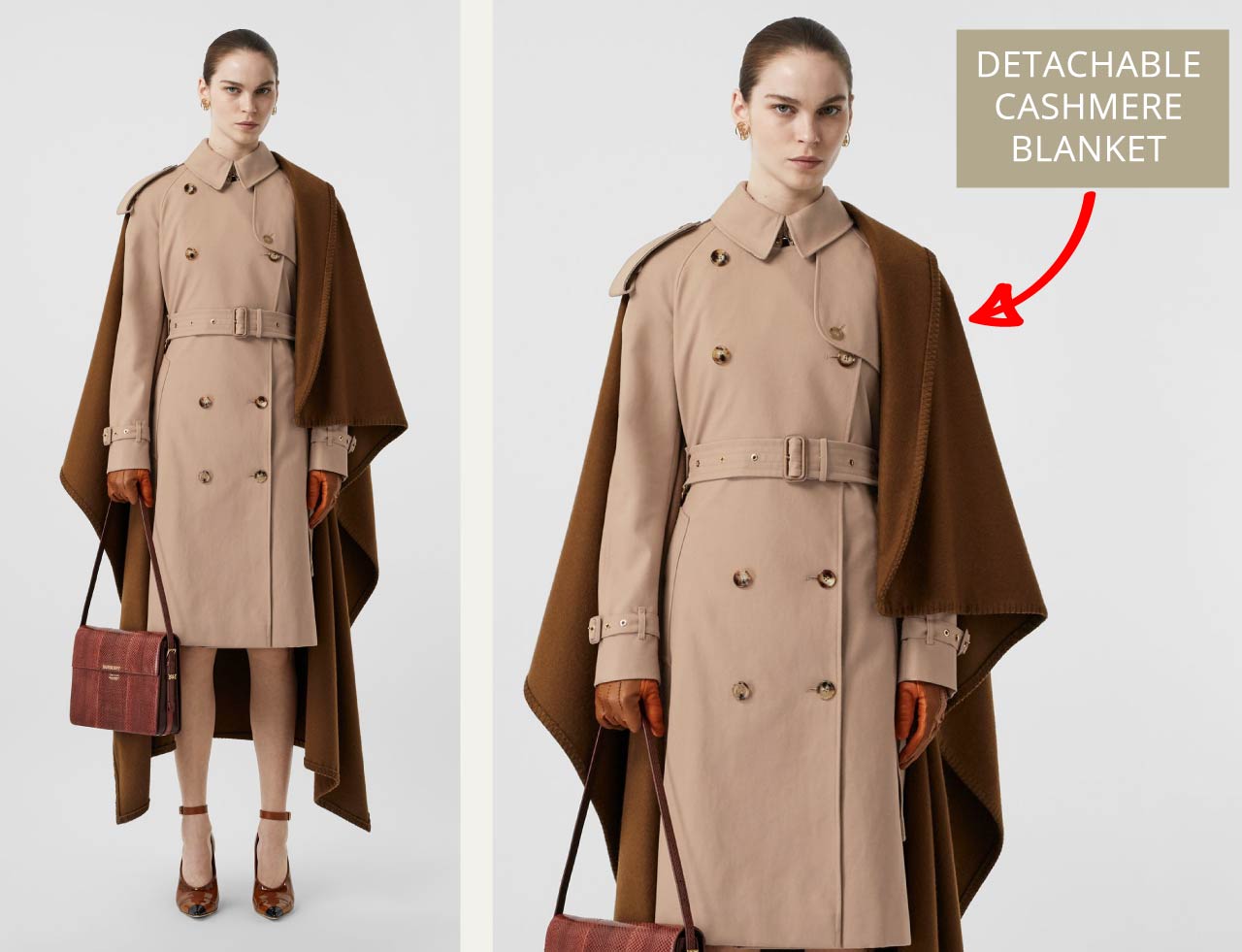 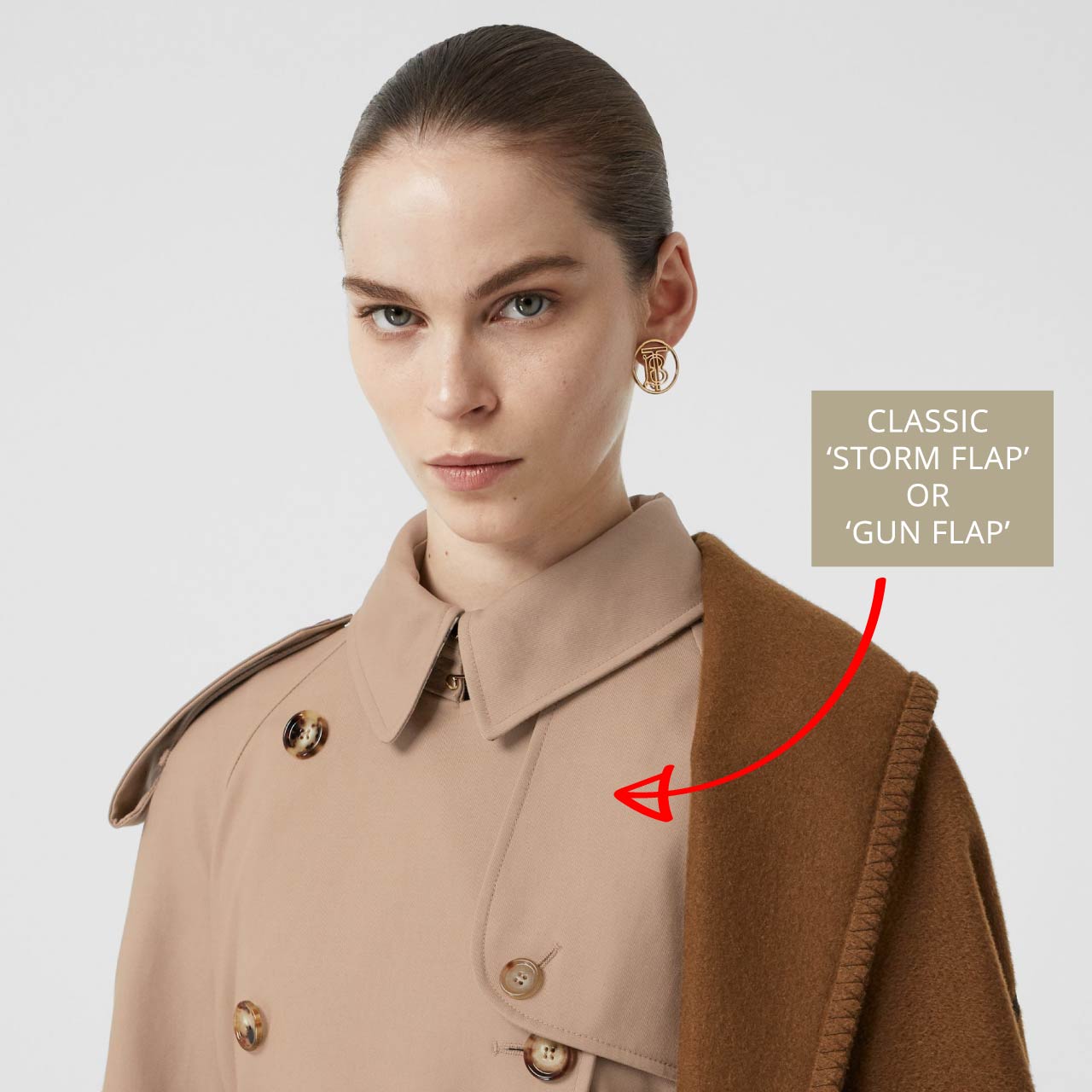 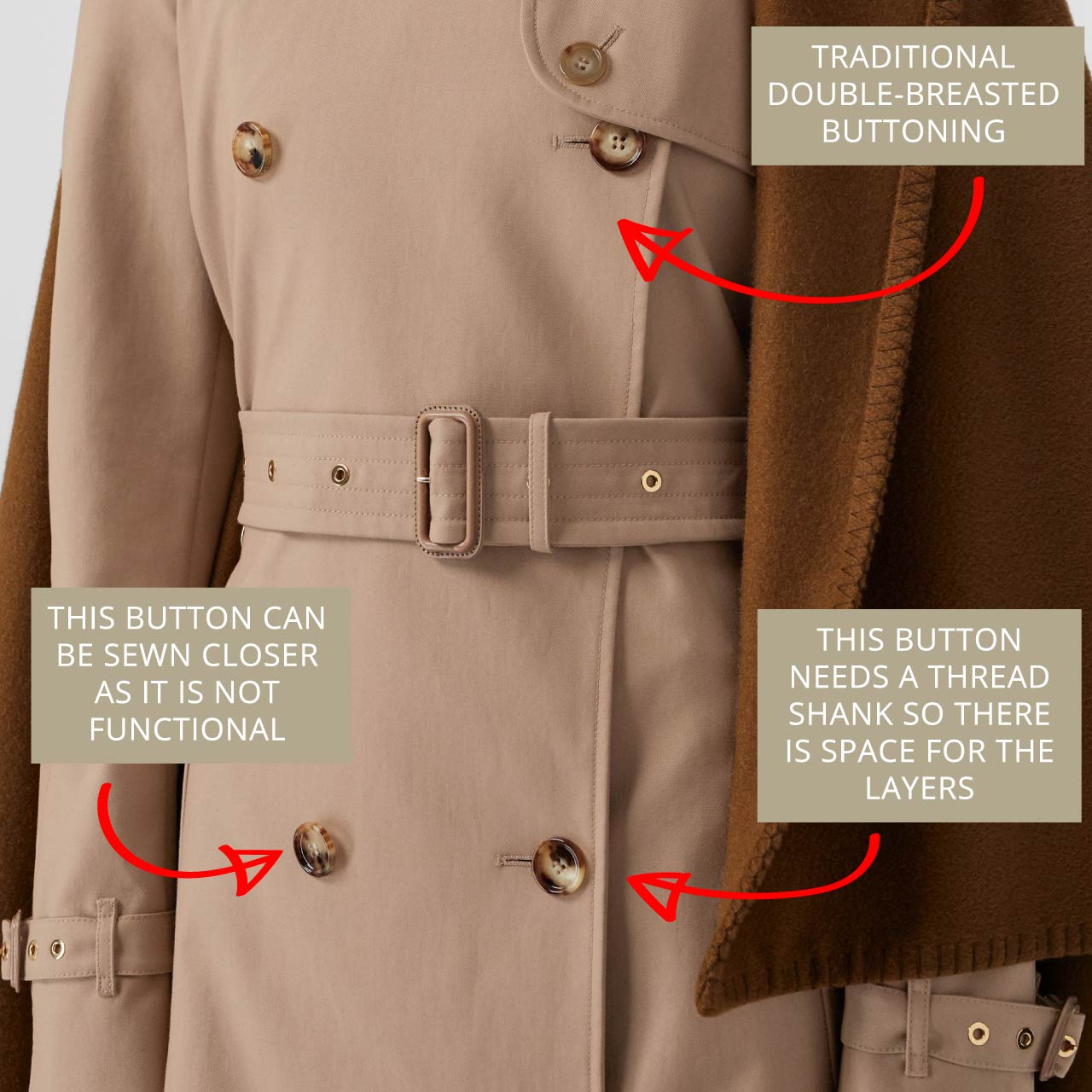 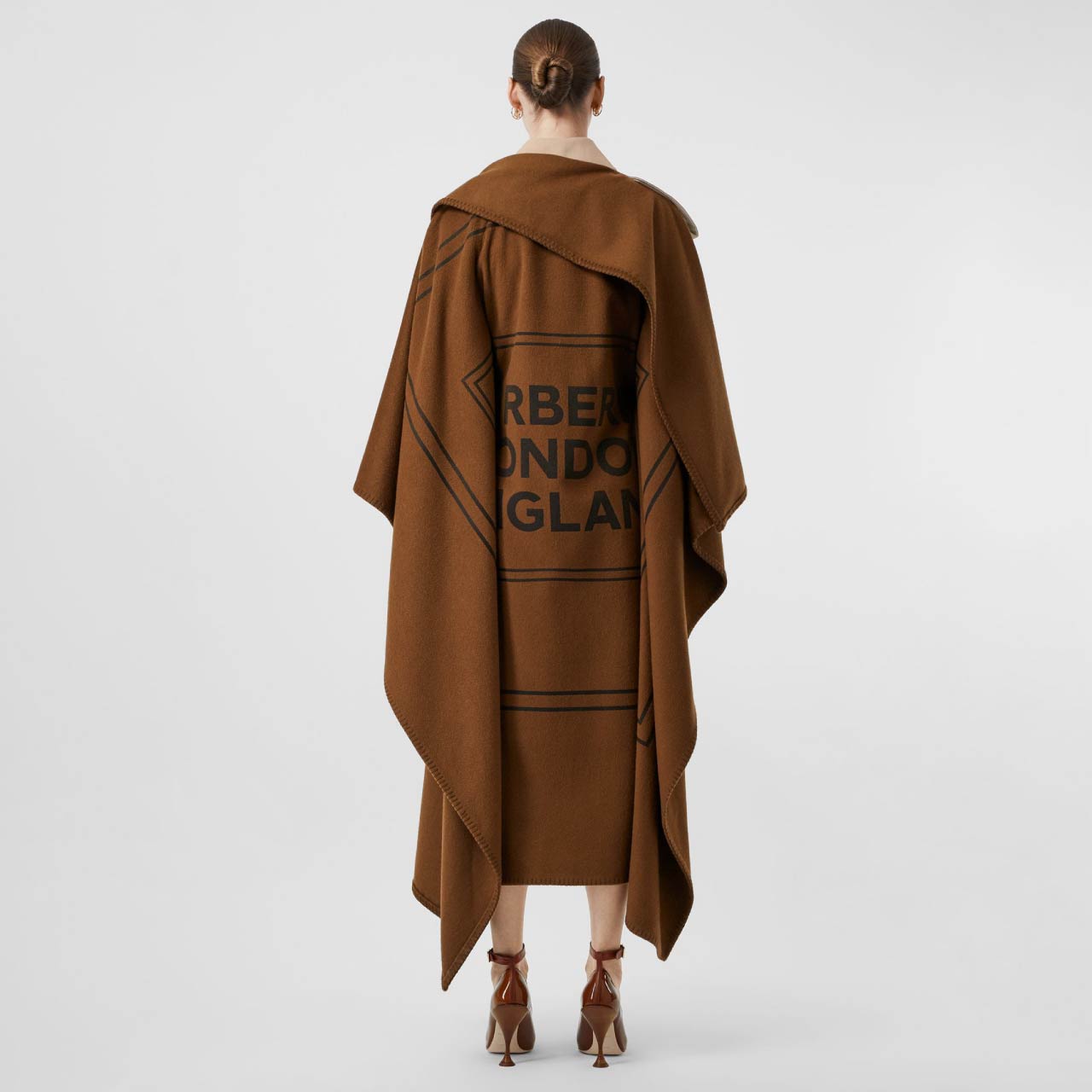 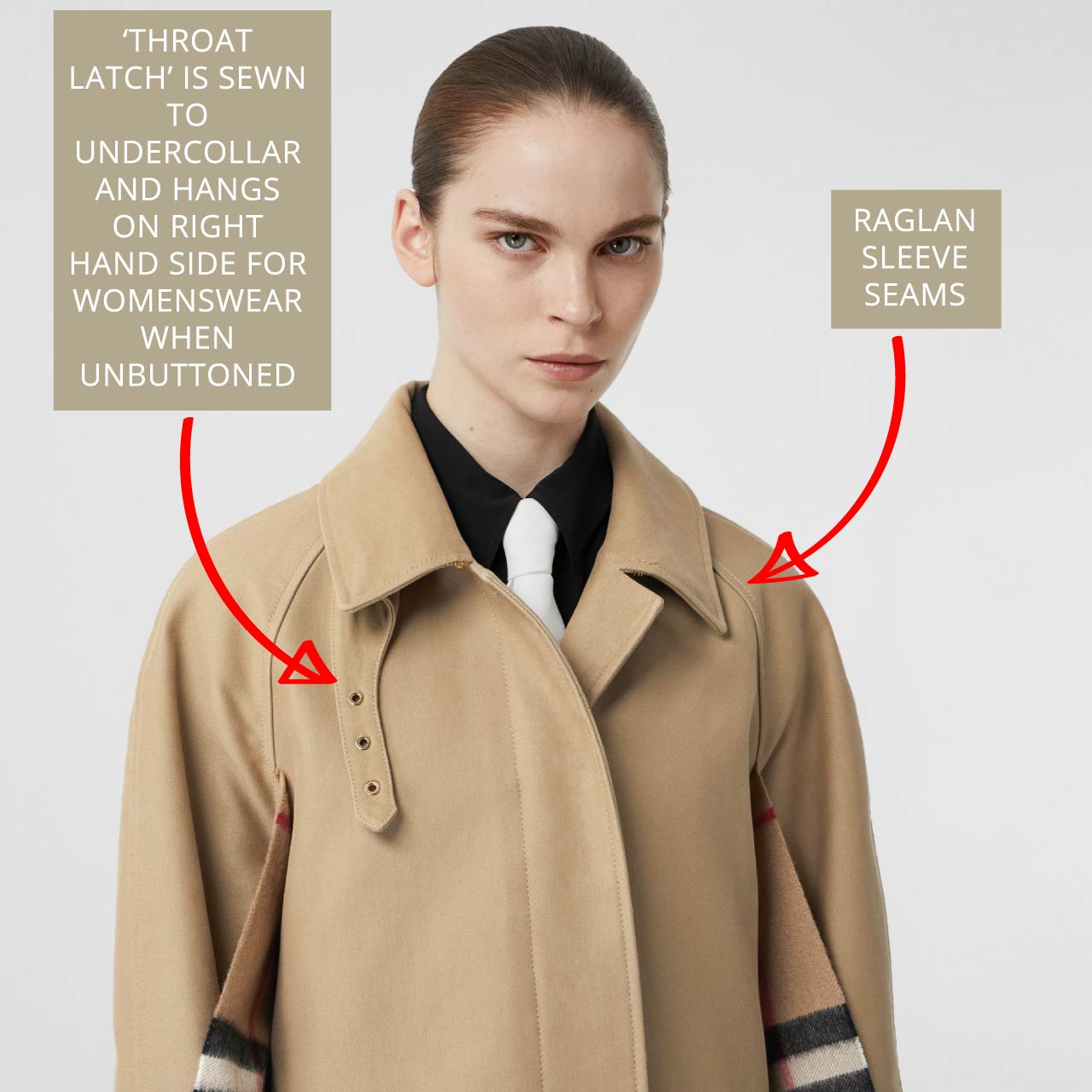 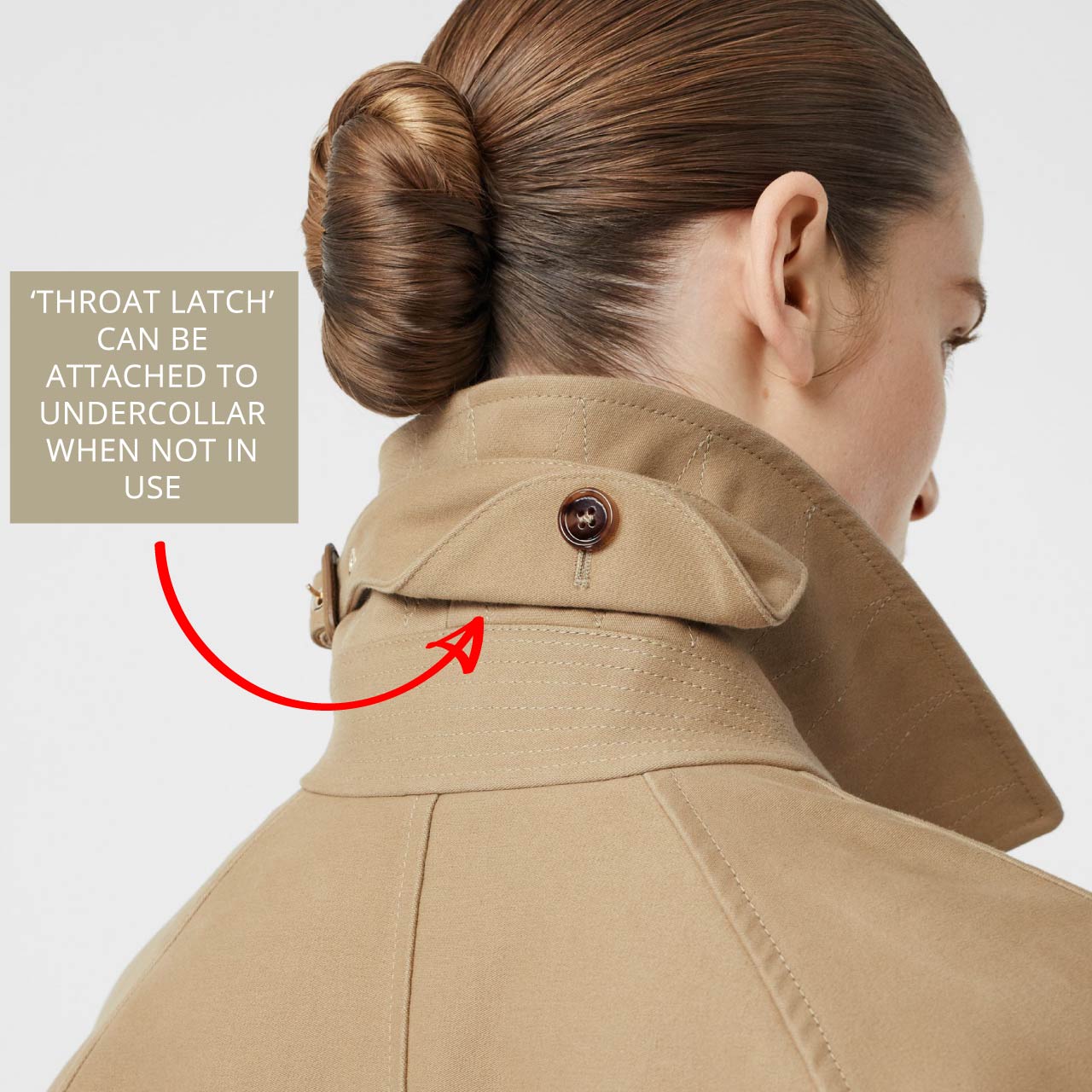 For a heritage brand, the background behind particular garments also becomes an important point to recognise, even if the final contemporary versions are quite a departure from the original function of the garment. Trench coats have a strong military base, which informs many of the functional details. Epaulettes» would typically have held insignia, and the asymmetrical shoulder flap at the front of the garment is often referred to as a ‘gun flap’ or ‘storm flap’. Some sources» suggest that in the act of raising an arm to fire a rifle, water would seep under the opening, so the flap is designed to button over the double-breasted closure as a water shield.

The idea of protecting against the elements informs many of the details on trench coats and car coats. For example, there is often a heavy-duty hook and bar closure at the front collar stand to keep the collar tightly closed. Over the top of this can be attached the ‘throat latch’. The ‘throat latch’ is often loose or sewn to the undercollar so that it hinges around. When in protective mode, it can be buttoned across the front of the collar and collar stand as extra protection from the weather. There are often buttons or buckles on the underside of the collar for this reason. When not in use the throat latch is often hidden under the collar by buttons and buckles on the undercollar. In this article, you can see a couple of examples of how the throat latch looks when positioned in this way. Pockets are also usually specially buttoned to help hold them closed from the weather, and buckles on the waist belt and sleeve straps allow the wearer to tighten the coat as needed for warmth and to cut out the wind.

It feels important that if you are reinterpreting a garment that in the past has had very specific functional details, that you consider how real or fake your own iterations are. For example, if you put on a section that looks like a functioning throat latch, then you’d better check that it works properly as a throat latch. There is a school of thought in design where a detail that is added should have a functional purpose, if it looks like a functional detail. On the flip side, if your collection is specifically about artifice, then that would have a different impact on how you do the details, whether you leave them off, make them a clever illusion of a real detail or make them look like an obvious fake. 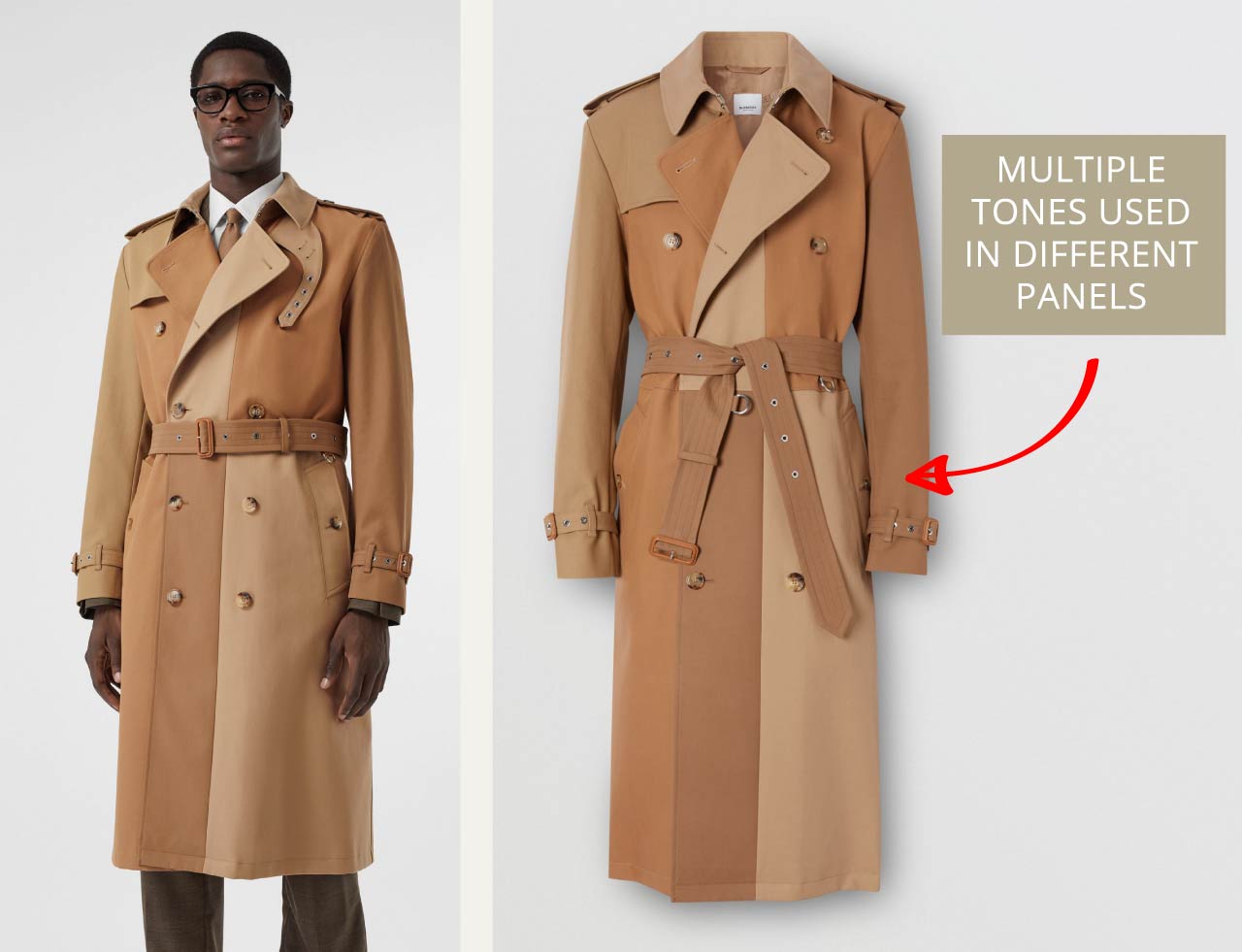 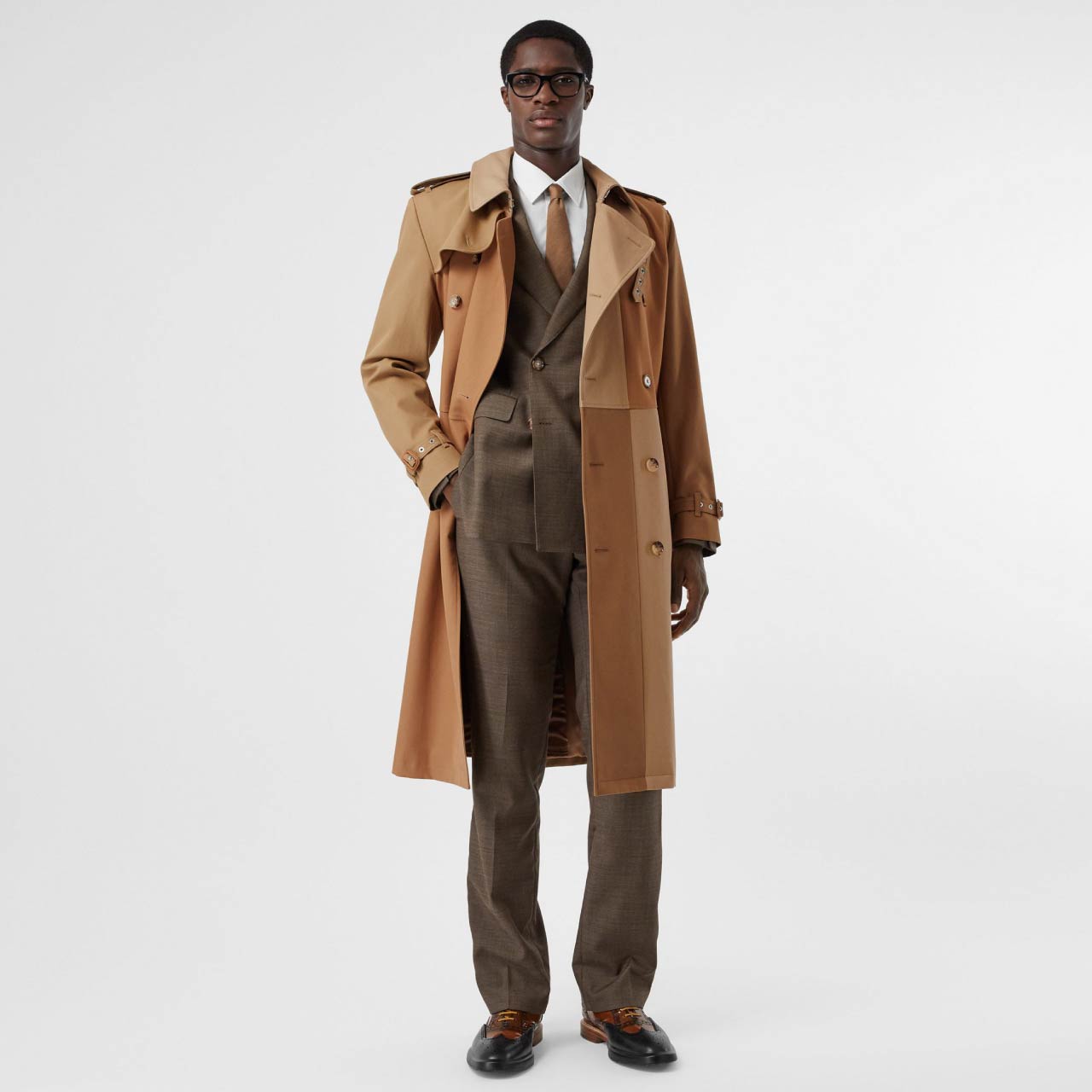 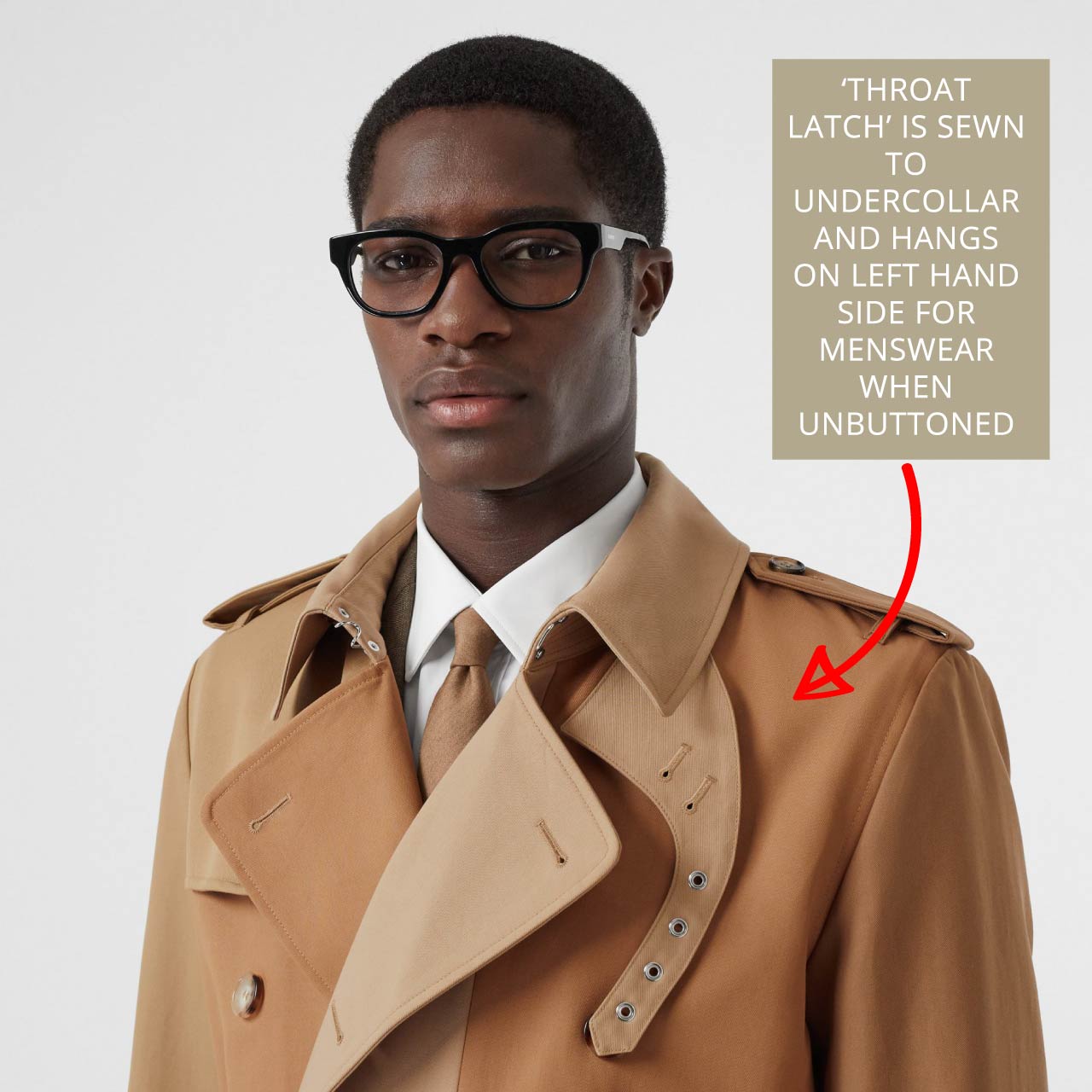 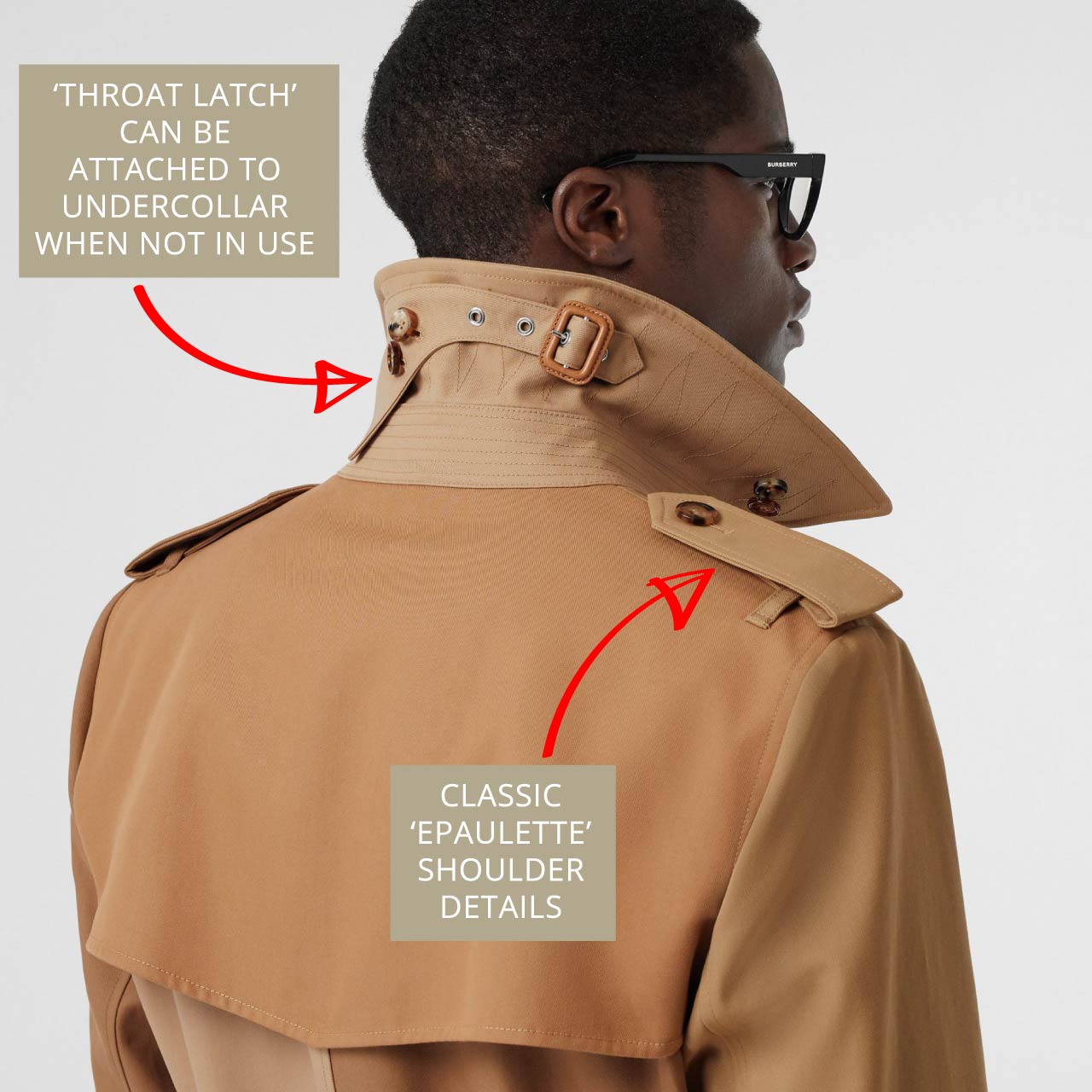 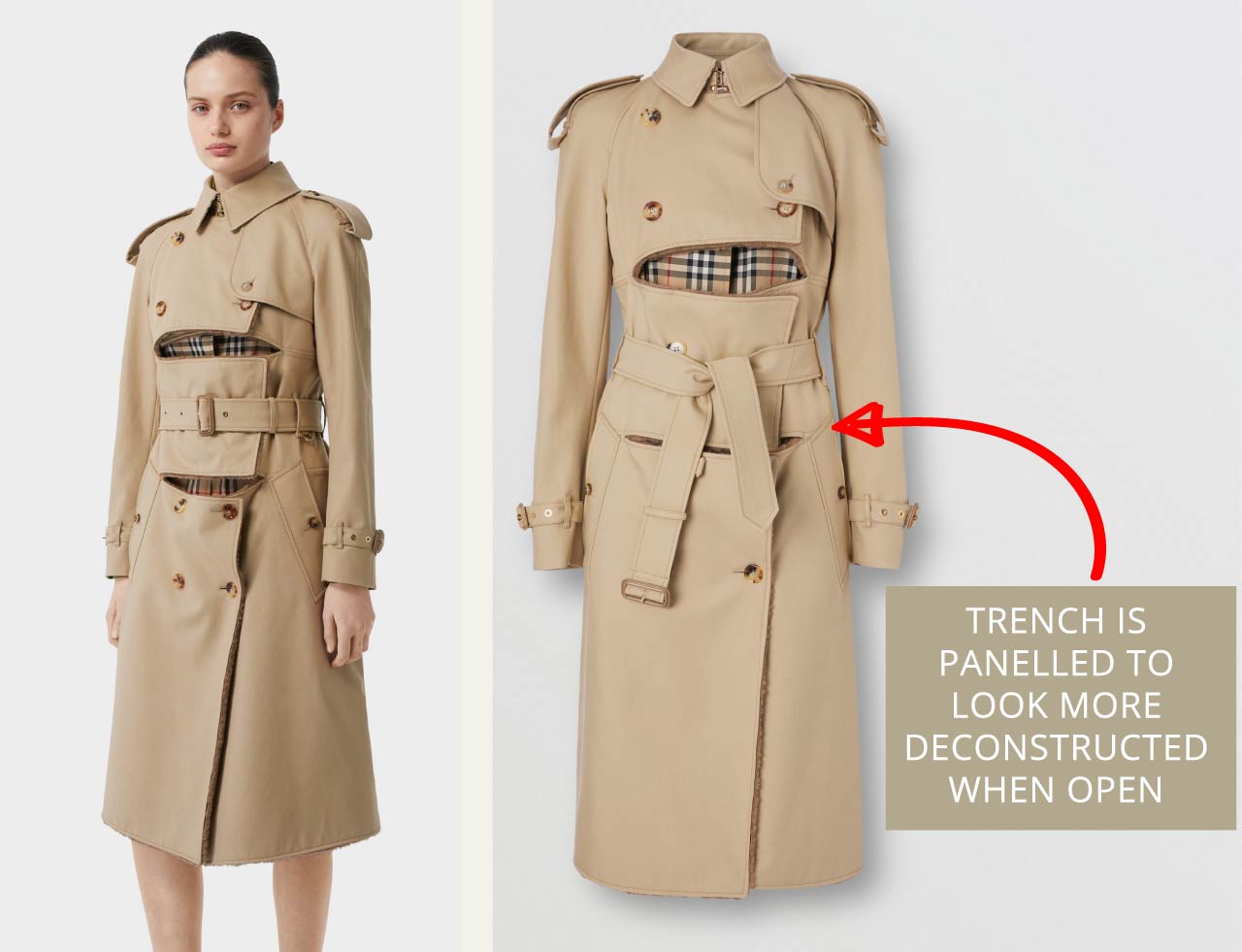 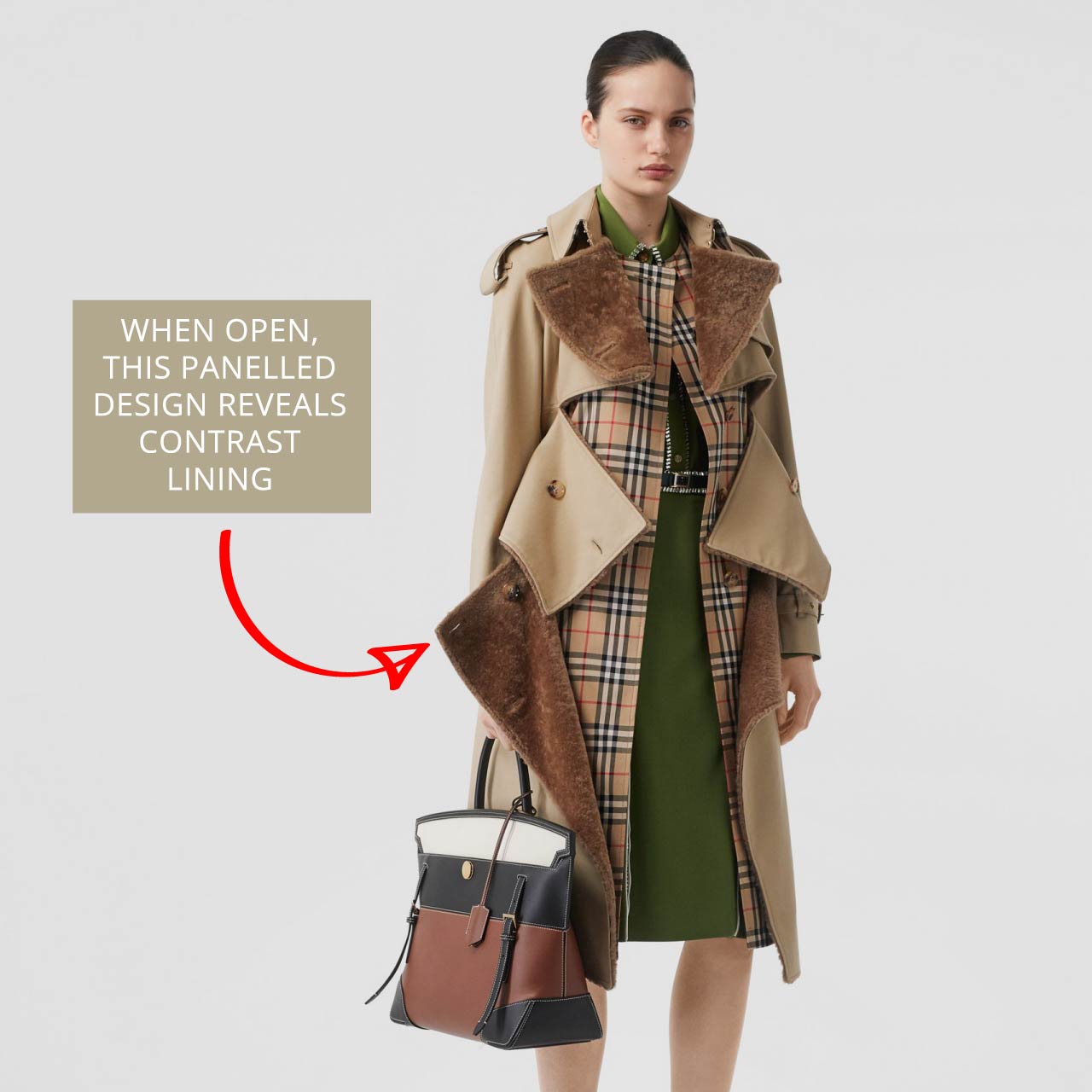 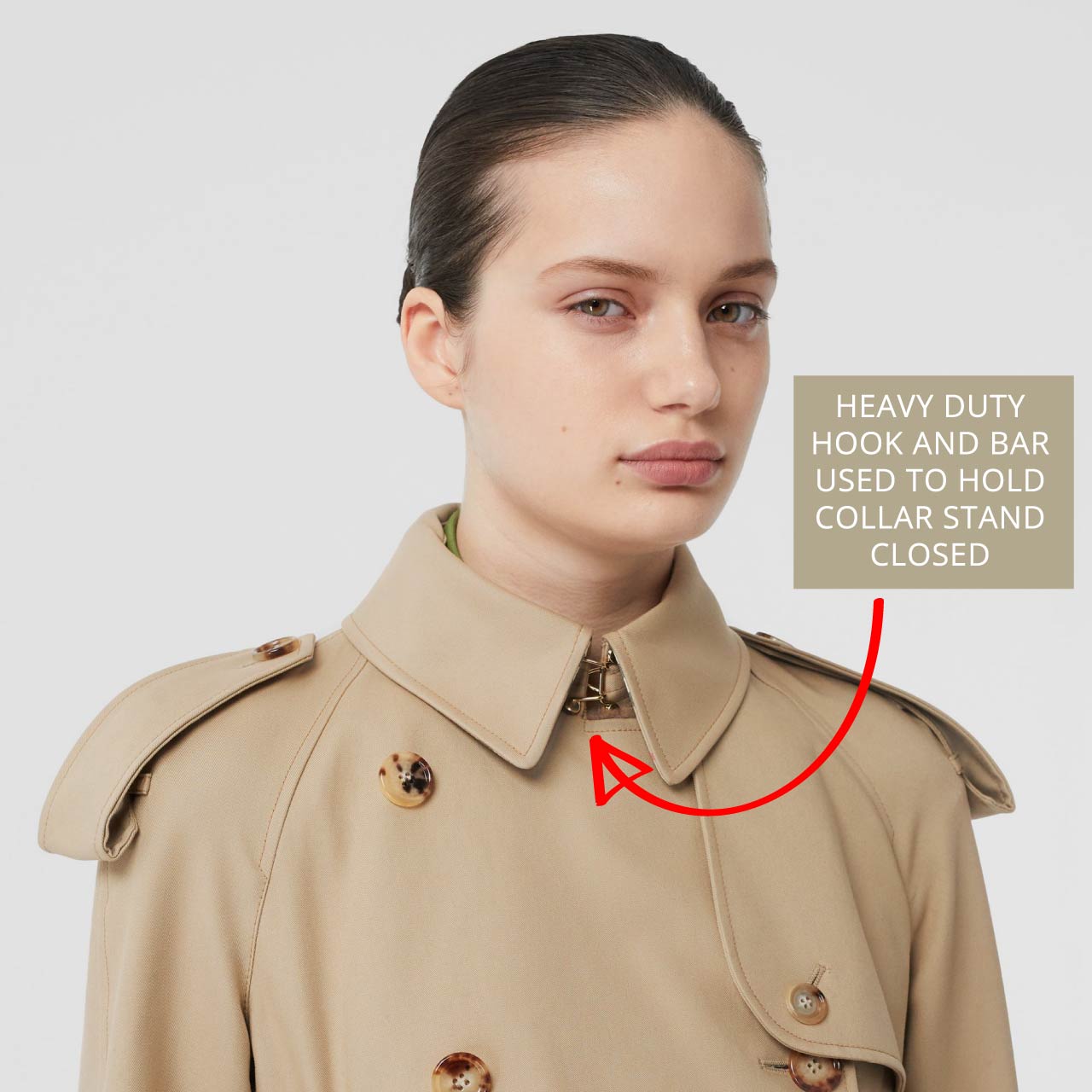 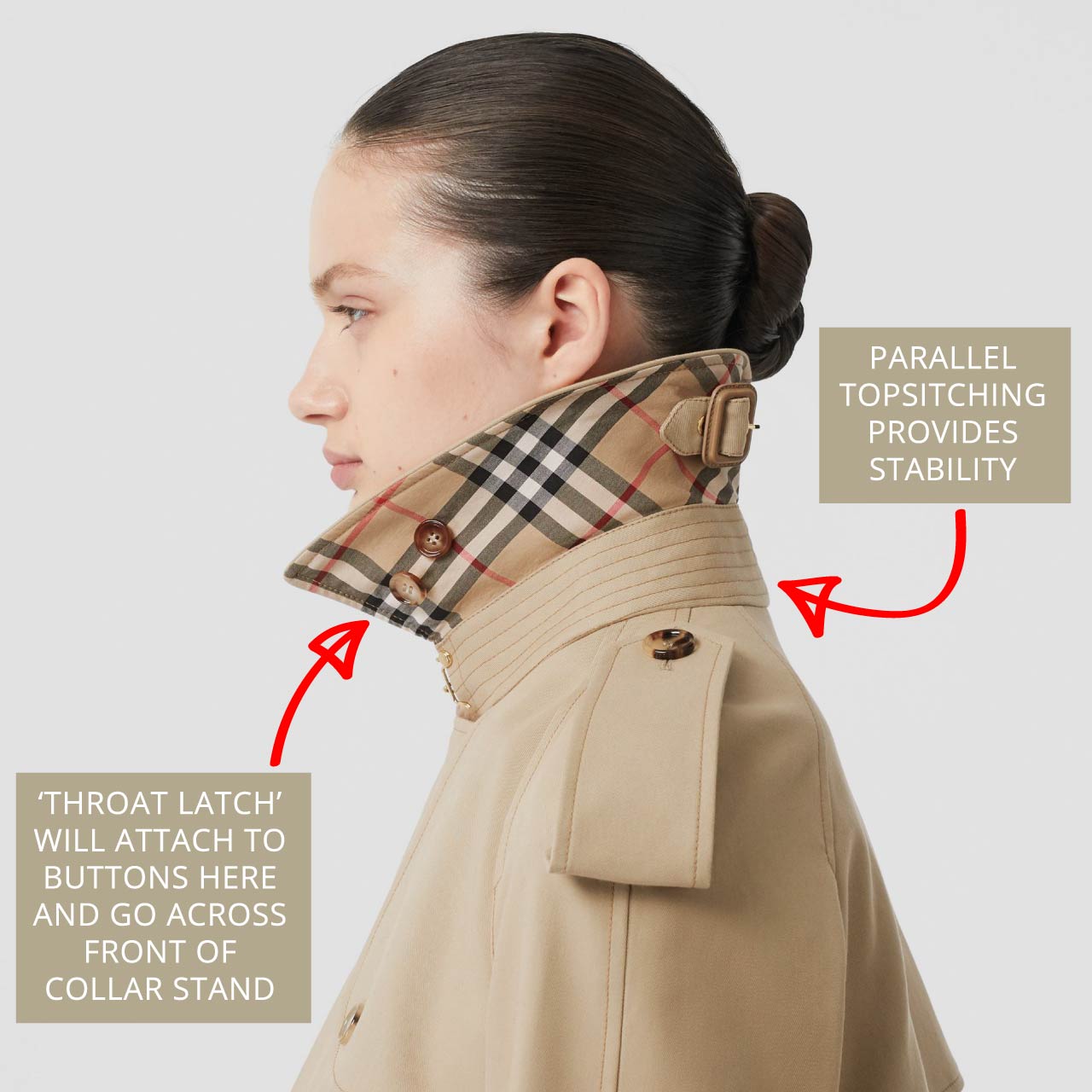 Of course, trench coats have come a long way from simply being practical military wear, and in the context of a luxury label such as Burberry, there is scope to play with more unusual details and embellishments. On the 2019 versions of the trench coats and car coats available at Burberry, you will find chain trim detail lacing through eyelets along the outline of trench coats. Or trenches sewn in a patchwork of tonal caramels. Or the typical buttons of the double-breasted design switched for press studs. In the case of some of the garments, the press studs are large, shiny and flat with a ring-shaped backing that shows on the outside of the garment. On other garments, the press studs have been made more detailed with ‘TB’ initials for Thomas Burberry showing on the outside of the trench.

In terms of pattern cutting, one trench coat is panelled horizontally so that when left open the layers appear more deconstructed and open to reveal a contrast shearling lining. On another coat, there is an interesting double-layered sleeve with an oversized cuff. Note that the cuff is controlled here because it is cut as a separate piece and seamed on – this gives you much more control and a greater sense of structure than simply making the sleeve longer and turning up the hem.

Layering effects are also seen in the trench that features a detachable cashmere blanket, and the car coat with classic Burberry scarf details seamed into the armholes and at the hem. In a way, this seems like a natural extension of the idea of being protected and rugged up in your trench – just in a very specifically luxury way.

A more graphic approach to trench coats and car coats is also seen in the use of typography splashed in bold red or crisp black across the garments. Note that the order of embellishment and construction becomes important in this case. On one trench it looks as though the garment was sewn first, with the typography applied on top of the fabric so that it wraps around the body and straddles seams. On other garments, it looks as though the type has been applied first to cut pieces of fabric, and then the garment is carefully sewn together so that the letters appear seamless. Of course, if you are sampling a collection and haven’t worked out the placement yet, it may be easier to place the type on a finished garment, and then finetune the order of construction for production. 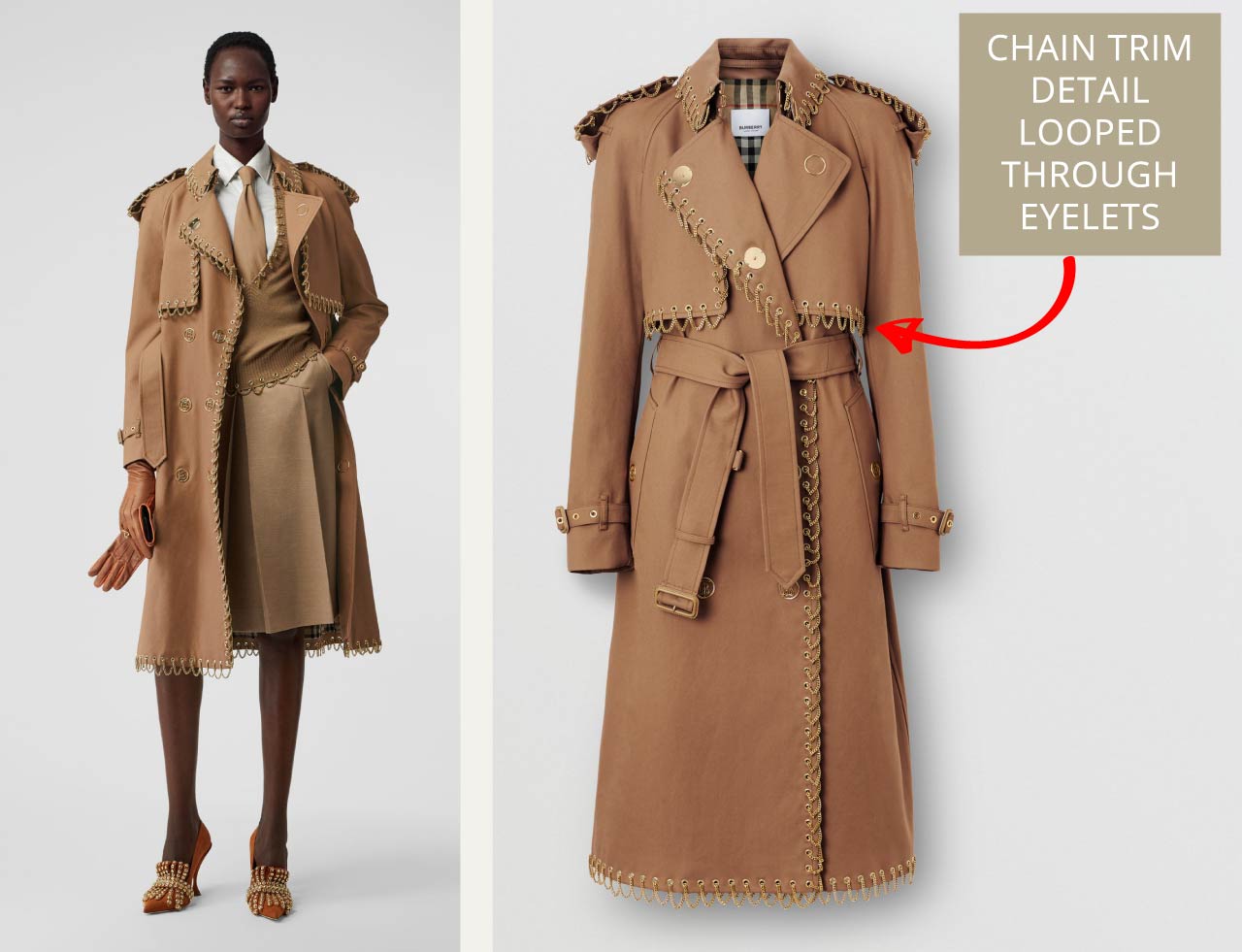 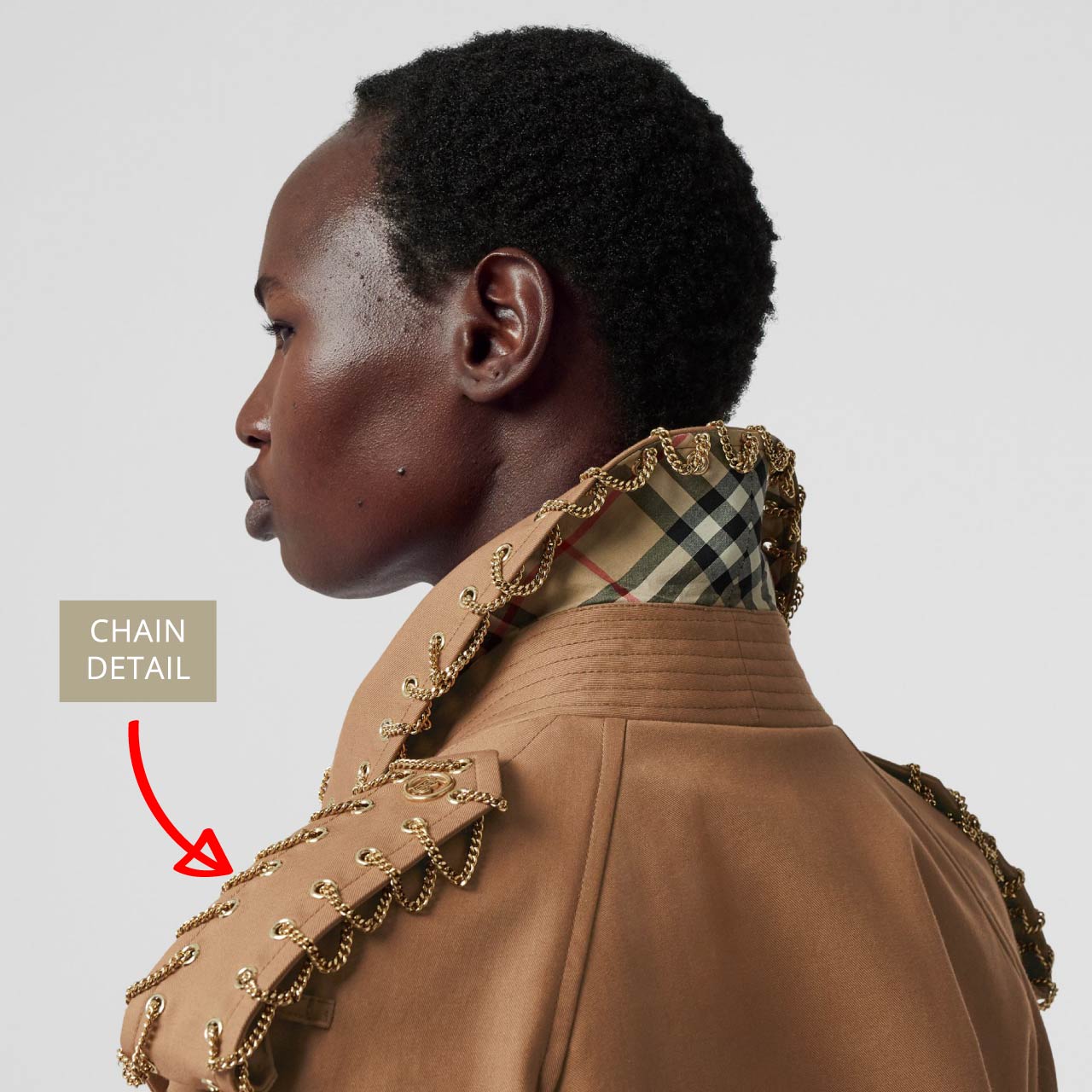 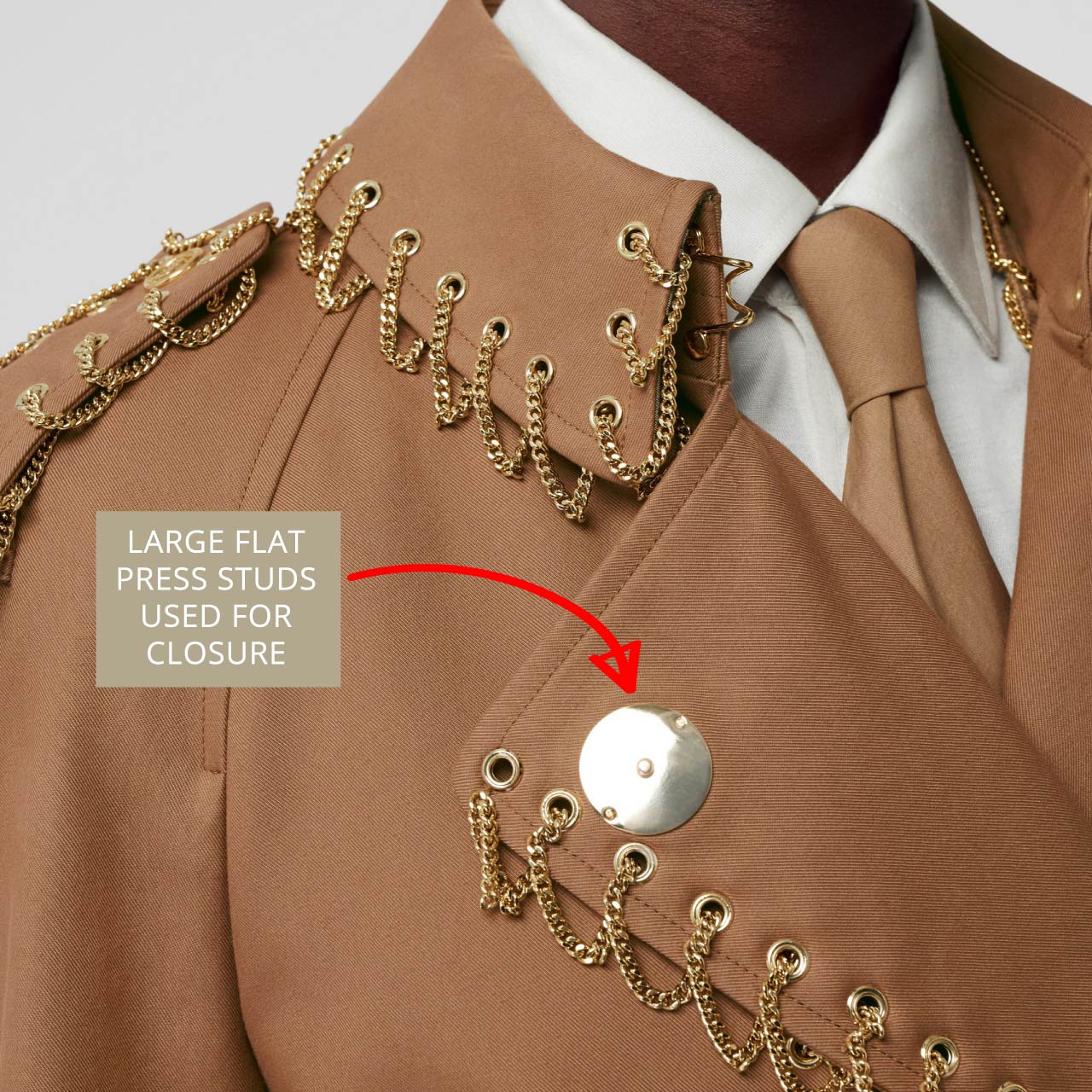 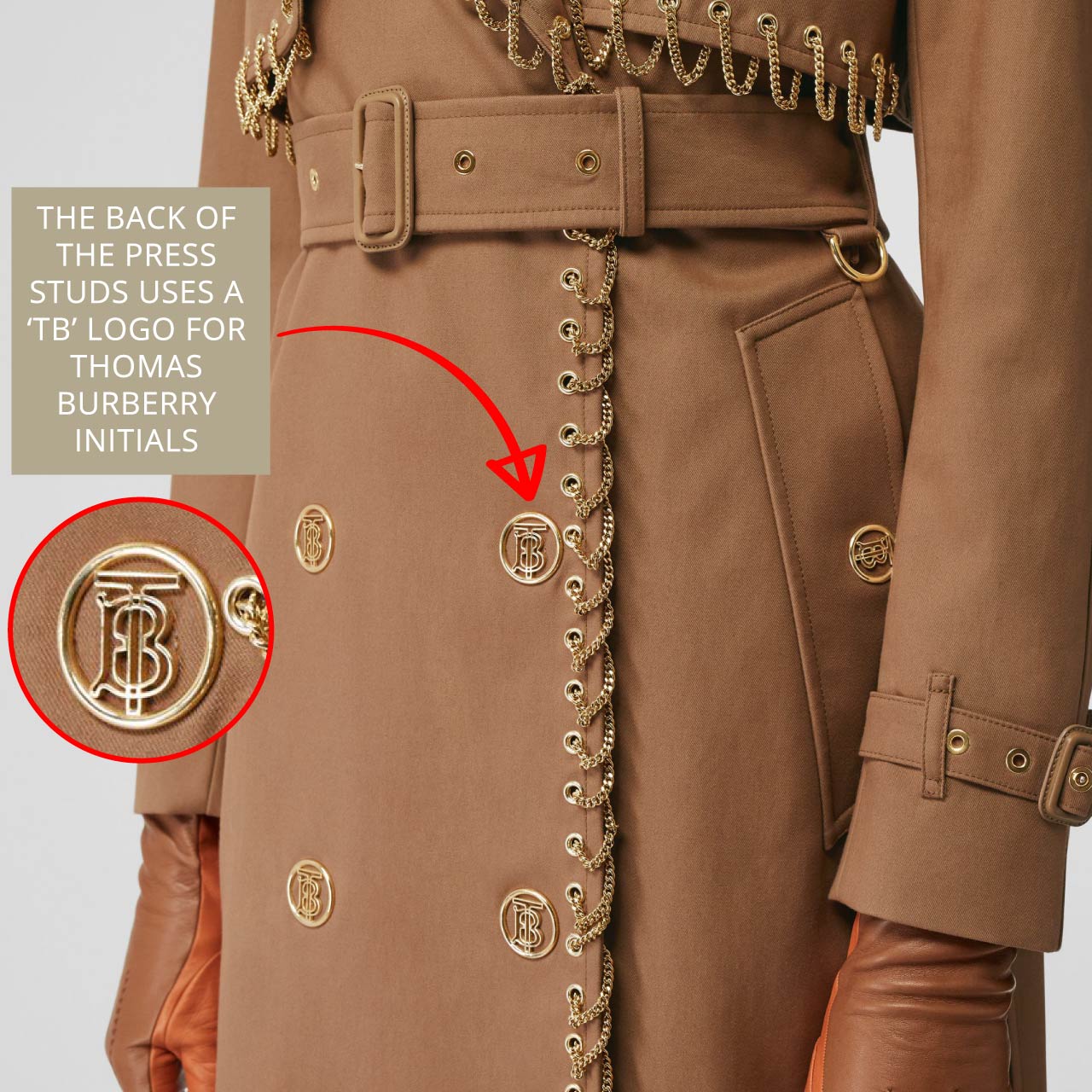 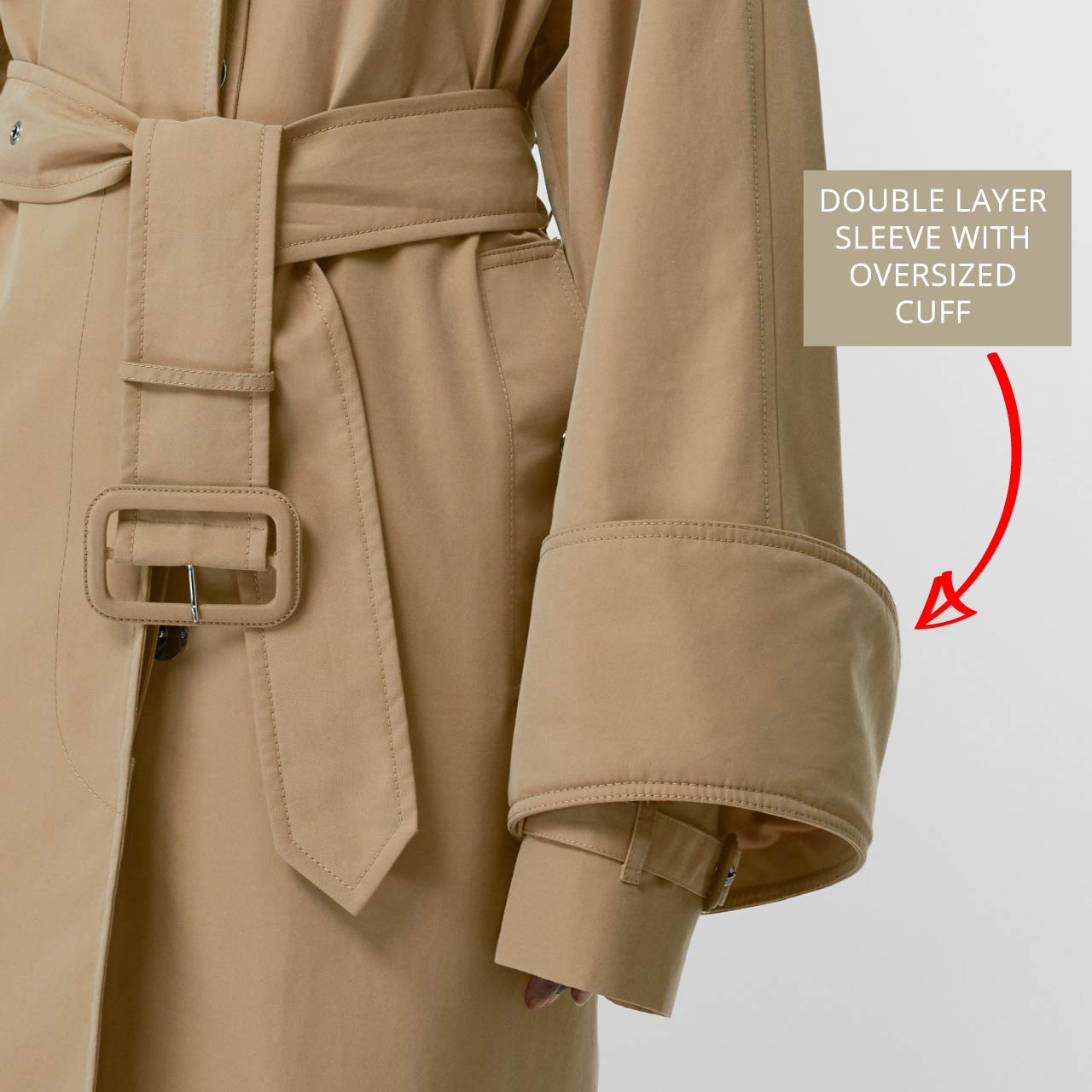 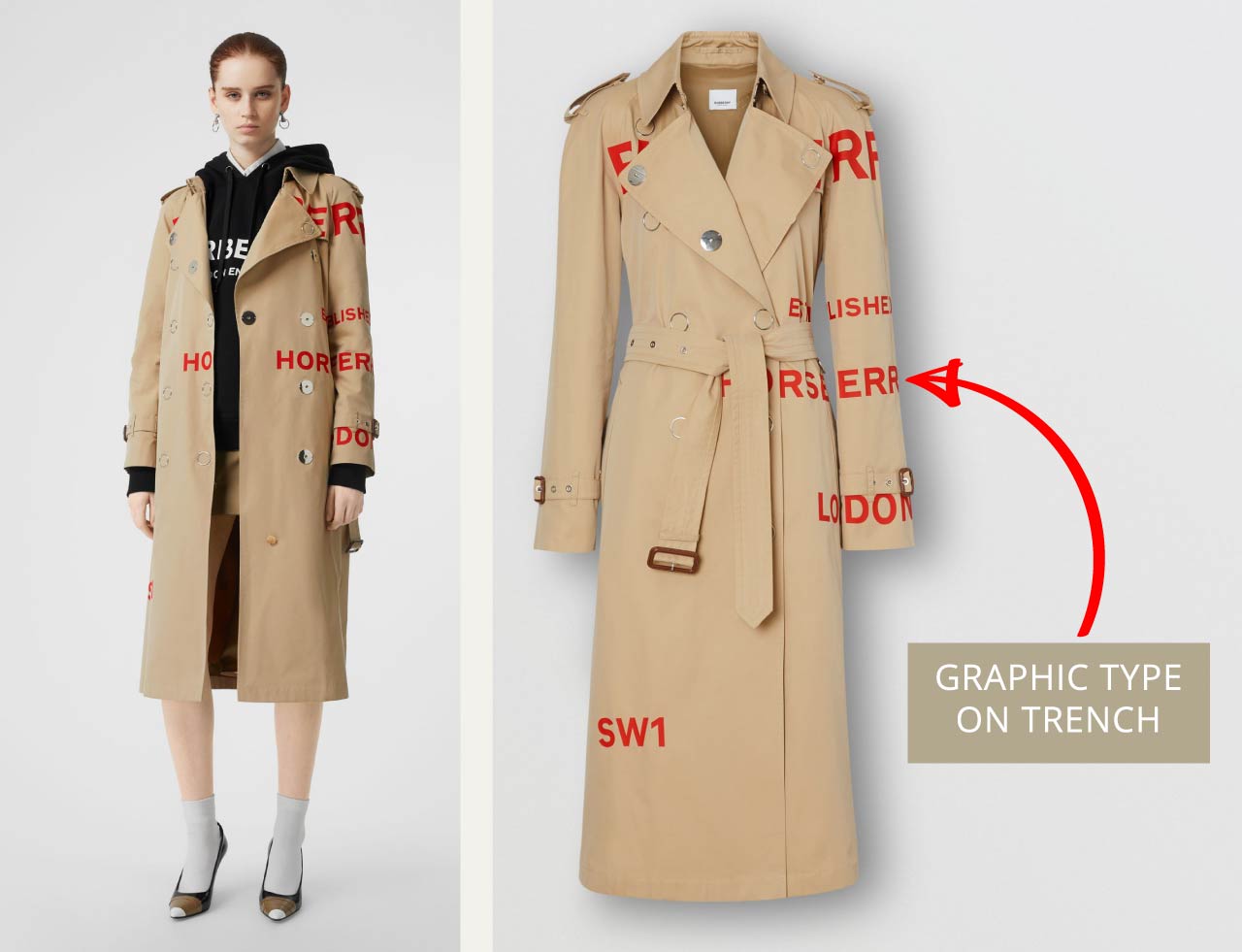 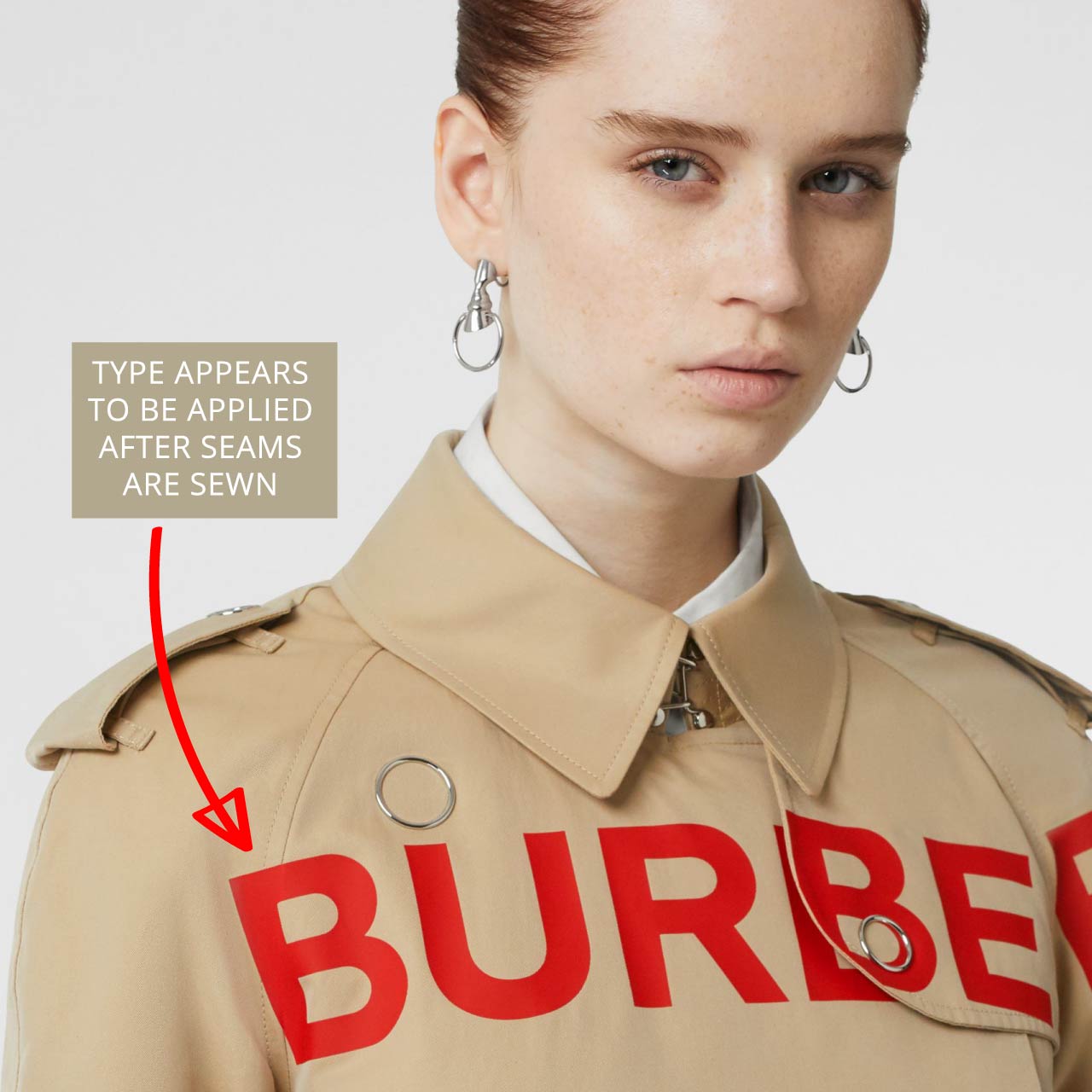 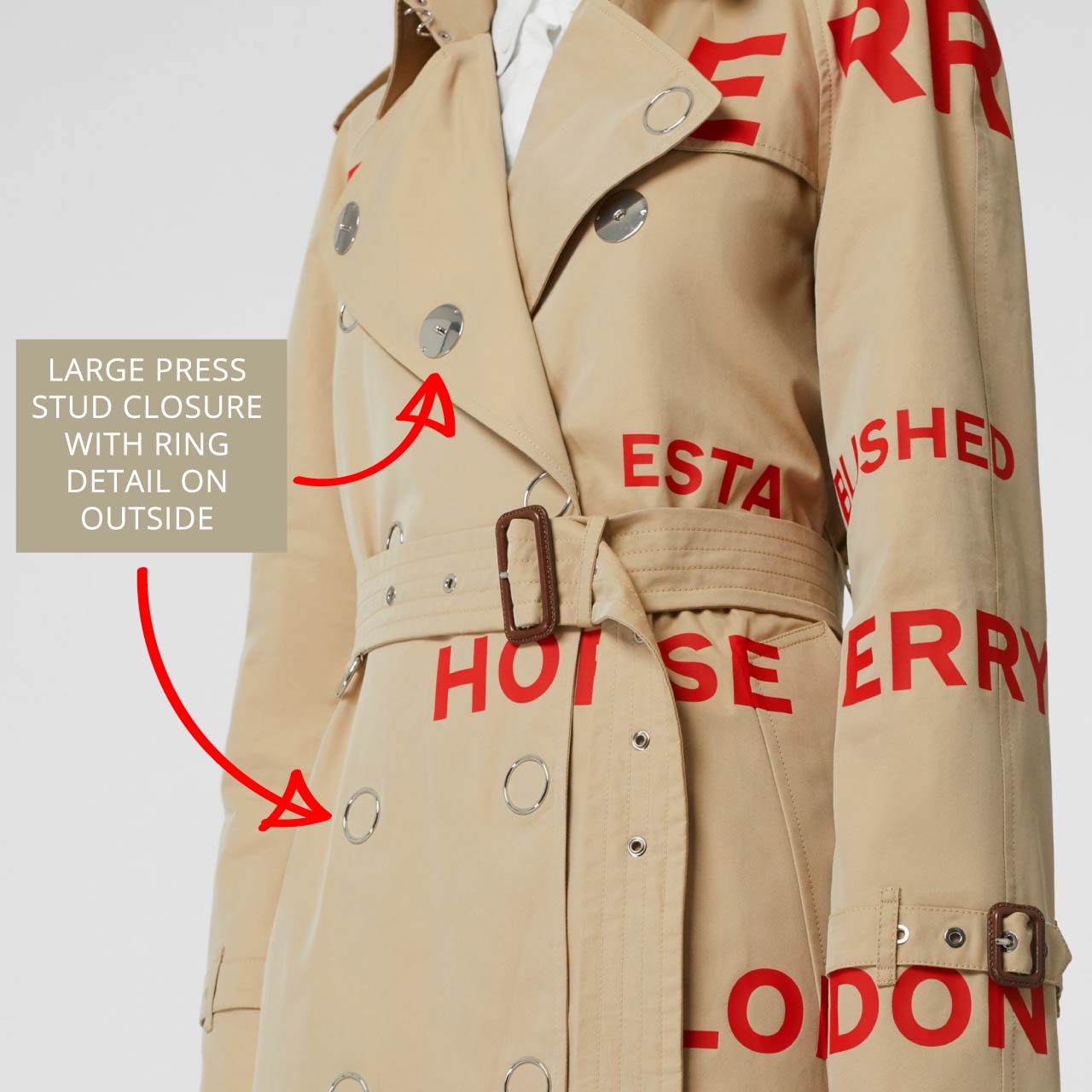 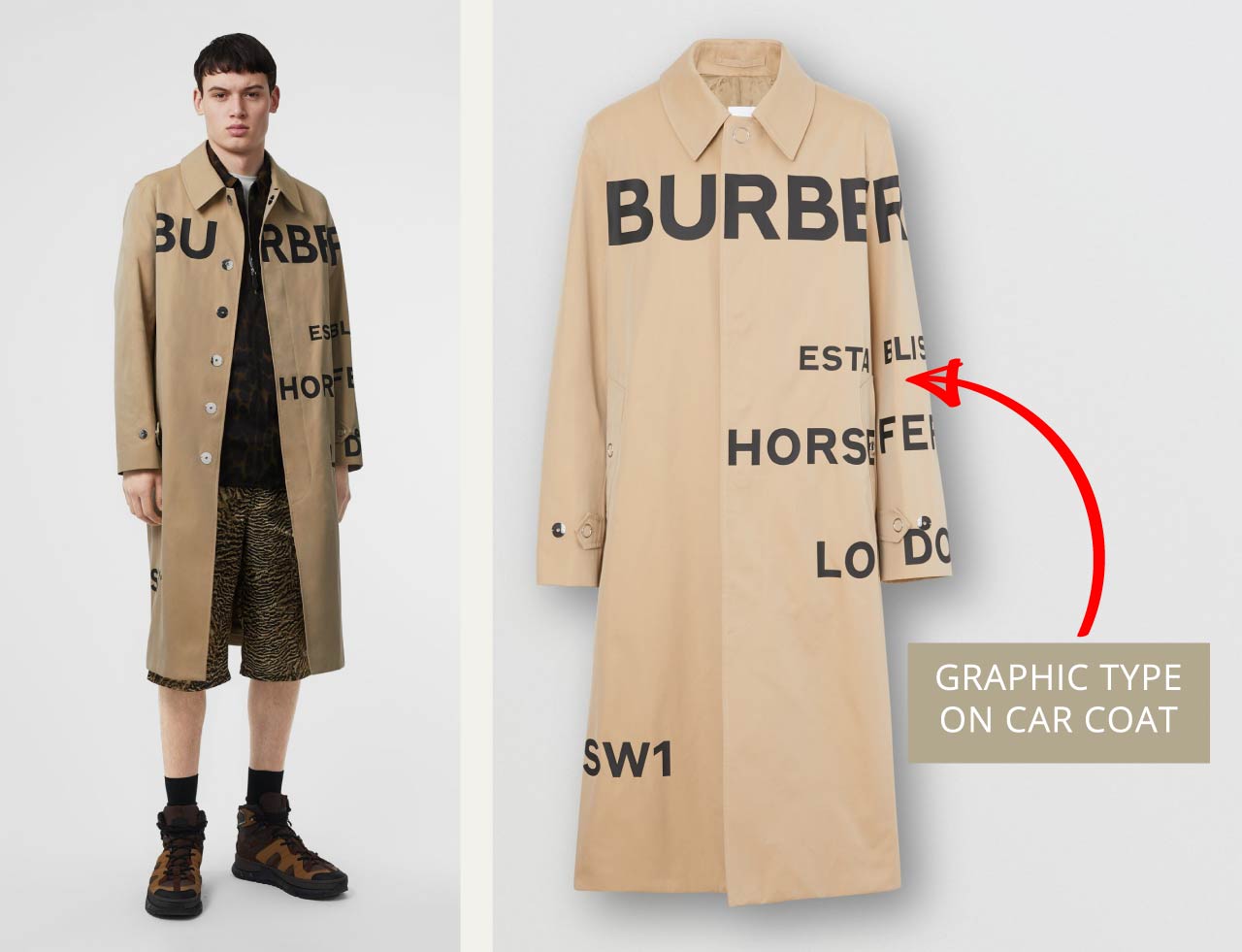 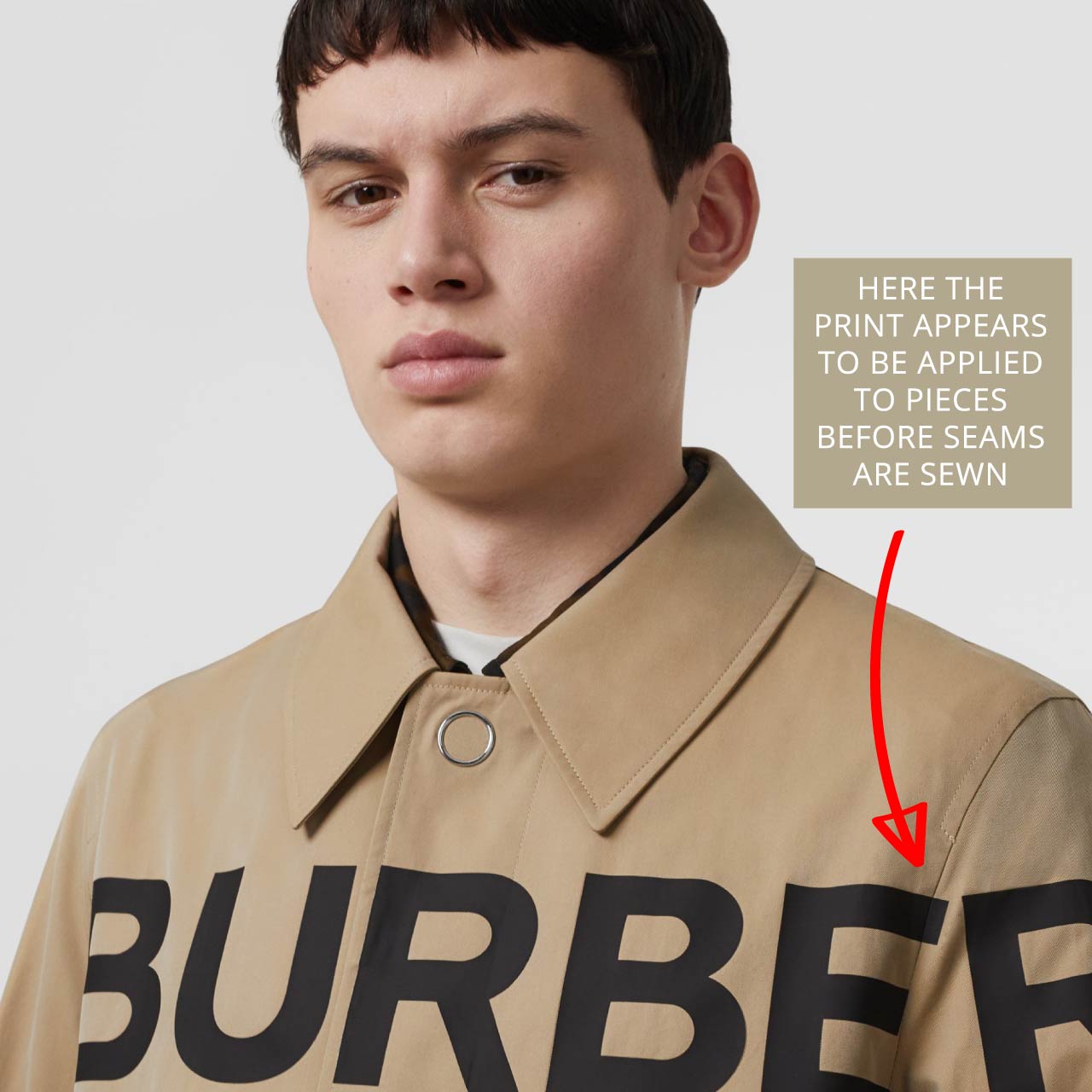 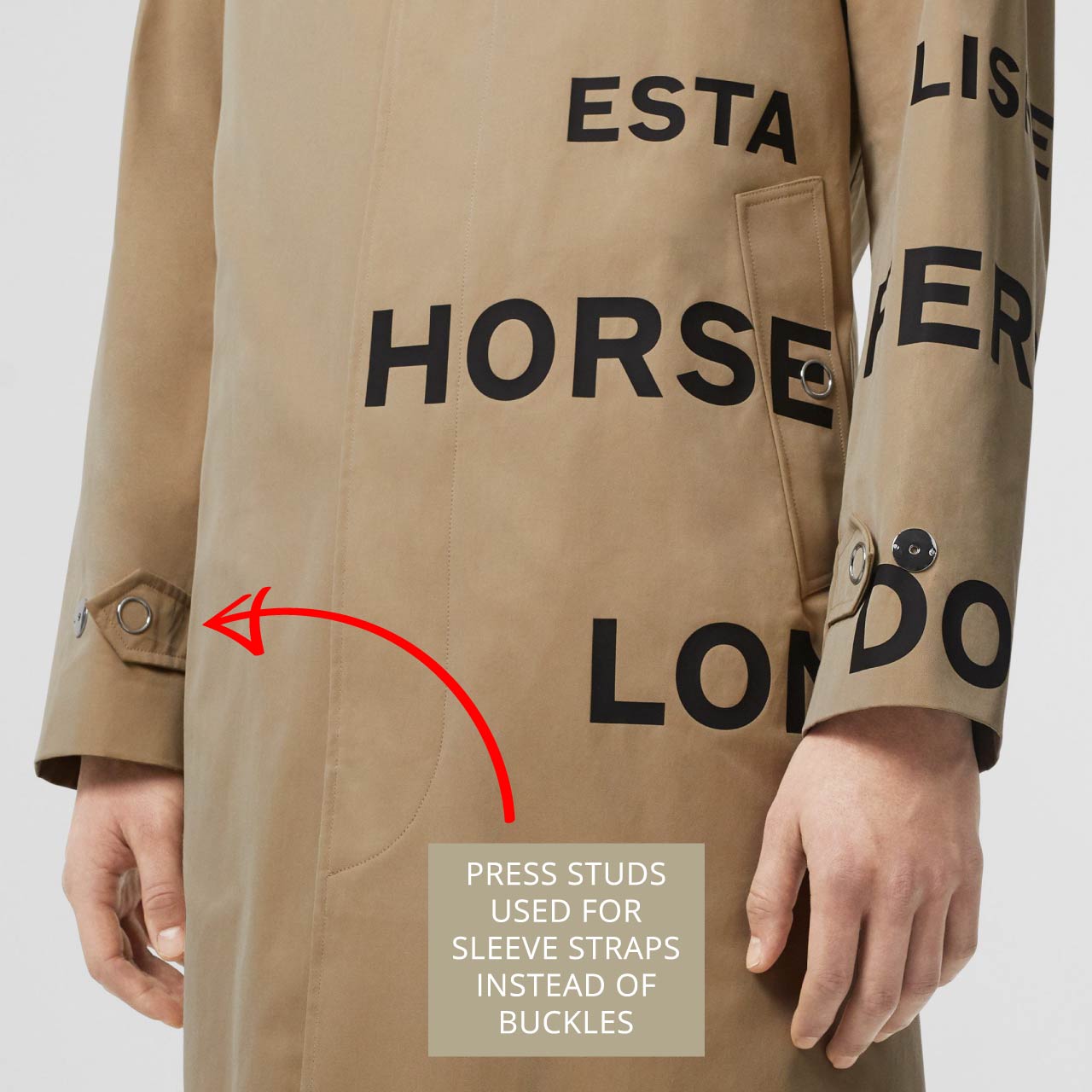