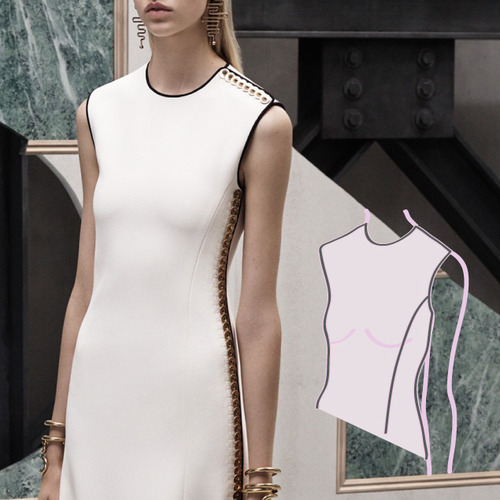 Sometimes a design that is very simple on paper can throw some surprisingly tricky pattern considerations at you. There was one particularly simple dress from the Balenciaga pre-collection that illustrates a possible solution to an important question: When you move a seam line away from an apex of the body, what are your pattern options to keep the same fit value?

In this case, since we’re using the Balenciaga dress as our example, we’re concentrating on the bust shaping so the “apex” we’re talking about is the “bust point”. You can imagine that this pattern could have been very simple if the bust shaping had been created with a fairly standard “Princess Line”, so that the panel ran from the armhole, over the bust point and down through the waist. However, the seam line actually runs off to the side of the bust, which means that some of the fit value may have been absorbed somewhere else. 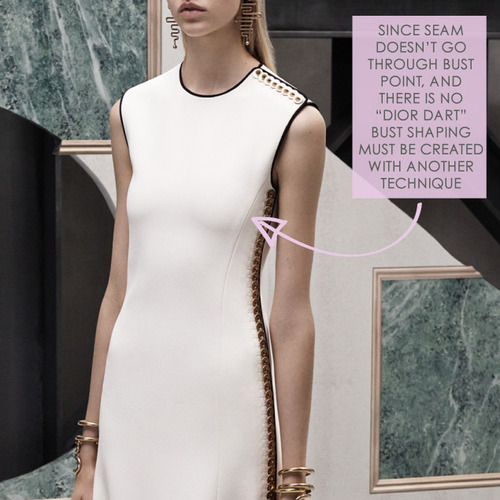 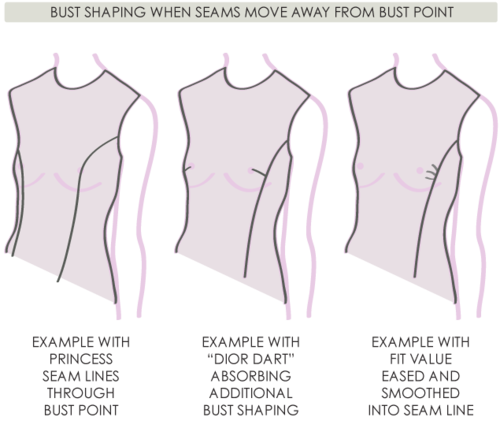 Sometimes you will see a style line moved to the side of the bust like this, but there will still be a small dart, sometimes referred to as a “Dior Dart” which is used to absorb that small bit of extra shaping that is still needed to smooth the fabric towards the bust point. This fit value could also be displayed in some other sort of visible detail, such as a few small tucks, or a small amount of gathering.

With a dress this simple, the dart, gather and tuck options would be quite distracting, so another solution could have been that the excess fabric in the centre panel could be carefully shrunk and eased smoothly into the side panels. This would be a difficult feat and you’d have to have particularly forgiving fabric…

The other option is to reconsider one of the structural elements at the heart of the pattern: the grain line. Given how smoothly the dress hangs to the curves of the model it appears that the dress may have been cut entirely on the bias grain. This appears to be confirmed in the review on Style.com» where this dress is described by Nicole Phelps as one of “a pair of sleeveless bias-cut dresses”.

If you’re struggling with some small pattern detail like this, then sometimes it’s not about trying to rework an existing pattern, but to think more about what you need from the fabric. In this situation, creating the whole dress on a bias grain may have given the designer just enough extra fluidity in the fabric to flow easily over the curves of the body. This was probably not as simple as just redrawing the grain line on the pattern, and may have required the pattern to be re-draped from scratch.

Many typical pattern blocks are designed so that darts and seam lines are created specifically to trace over the “hills” and “valleys” of the body. In this way basic pattern blocks, and the patterns of many tight fitting garments, are designed to cling to the widest and narrowest parts of the body. Many garments are created by simply sticking to the traditional seam positions or by shifting the fit value around in fairly simple ways, such as swinging dart value into a new position around the same apex of the body.

But you don’t have to only trace over the curves of the body in this way, and sometimes by shifting the position of seam lines, and forcing yourself to deal with the fit issues this may cause, you will be forced to consider more interesting solutions.

More details from this collection:
Fastening Details at Balenciaga»