In discussing some of the details from the Balenciaga Pre-Fall 2015 collection», we began to discuss how moving the positions of panel lines can affect your ability as a pattern maker to fit the fabric to the body. As it happens the Christian Dior Haute Couture collection for Spring-Summer 2015 included garments that pushed panel lines away from the bust point apex to achieve slightly different fit variations on one basic sleeveless silhouette.

If you are familiar with pattern making, then you will know that there are certain guideline measurements that help you to work out how far away from the bust point you can set dart points to achieve a good first fit. For example, depending on the size of the bust, you will normally set your basic pattern dart point at least 1.5cm, and up to 5cm, away from the bust point (BP). This seems like a wide margin of difference and it would be nice to think there was just one measurement that was guaranteed to work for every pattern, however if you think about the variety of body sizes in the world it makes sense that this measurement needs to be considered in proportion to the overall size of the pattern. The bust of a teen and the bust of a 60-something-year-old lady are probably going to require different types of bust shaping, and the distance of the dart point from the bust point will help to control this shaping.

These “guide measurements” aside, if the dart point placement is instrumental in creating a specific design effect then there are no limits – if you want to create a cone-shaped bust effect then by all means put the dart point directly on the bust point. If you wanted a looser, less fitted effect, then the dart points could be moved back to make the darts shorter or turn the darts into smaller tucks instead.

Basically, the further you move a dart or panel line away from the bust point, the less control you will have in fitting the curve right on top of the bust. In the example images from the Dior collection you can see that the busts of the models aren’t very pronounced, which gives the pattern maker more scope to shift panel lines around with less drastic consequences for the fit of the garment. However, you can still see that some panel line configurations keep the curve of the bust more easily, while other panel/dart/yoke combinations create different shapes or more flattened effects.

To give you a sense of this idea of panel lines passing within range of the bust point, bust point dots and circles have been added to the following images. You can then follow the lines of these panel lines as they pass through the rough circle that radiates out from the bust point. 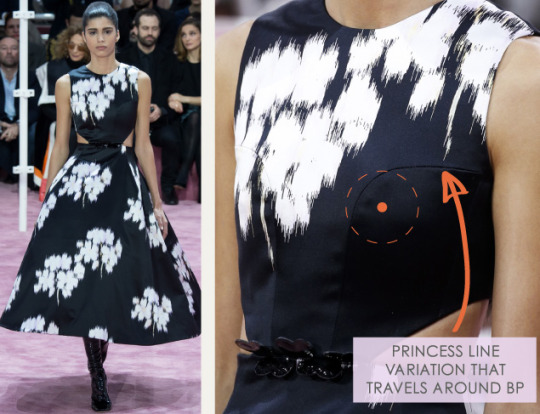 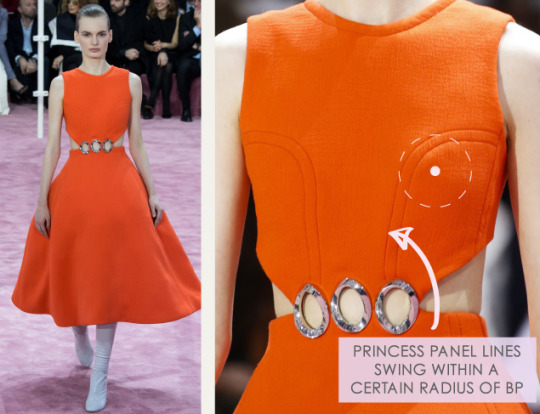 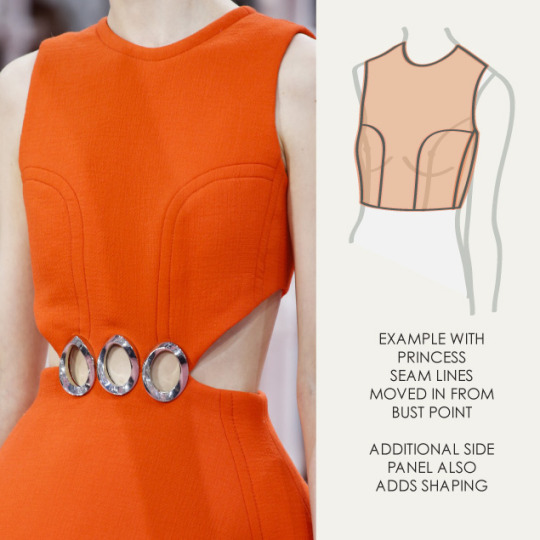 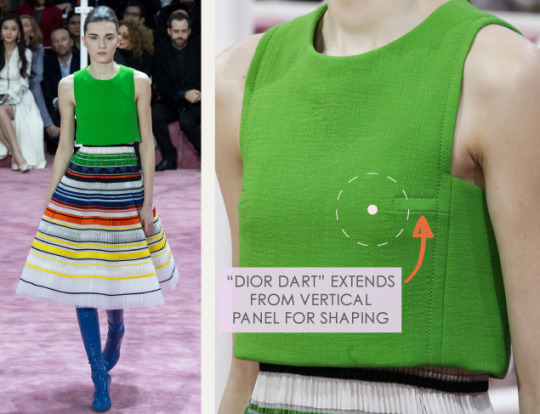 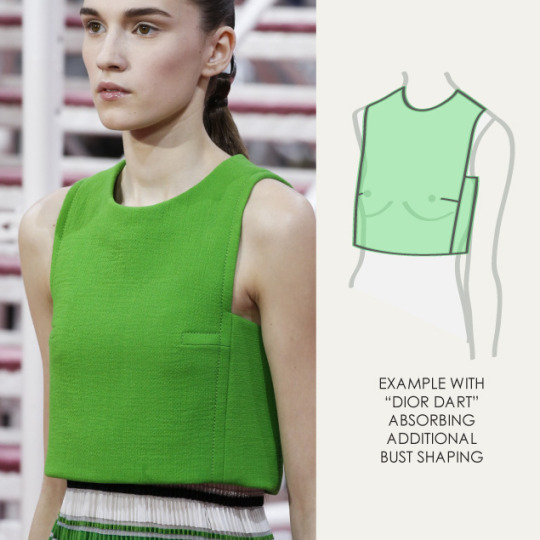 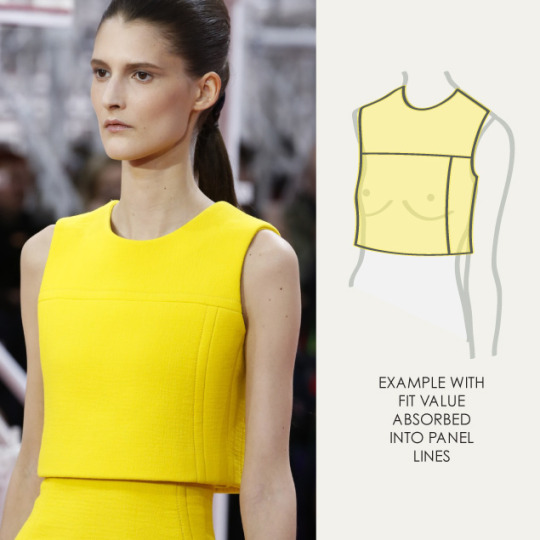 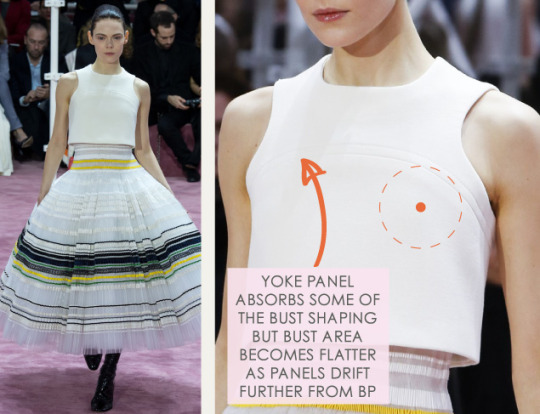 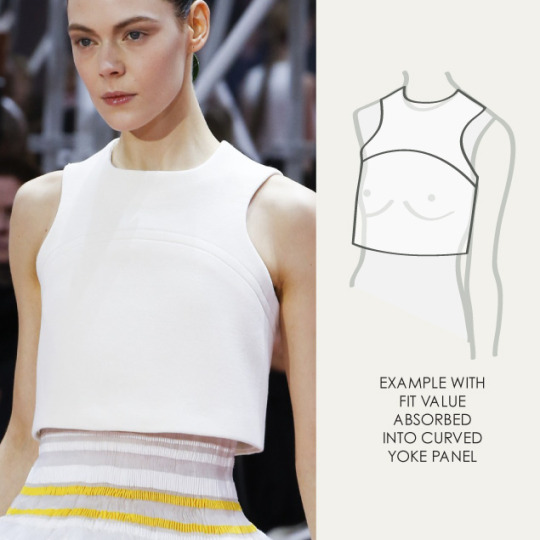 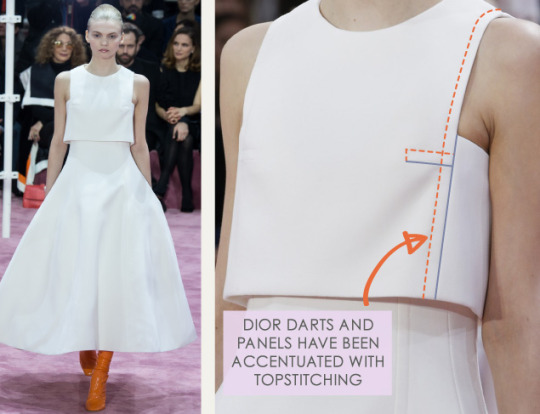 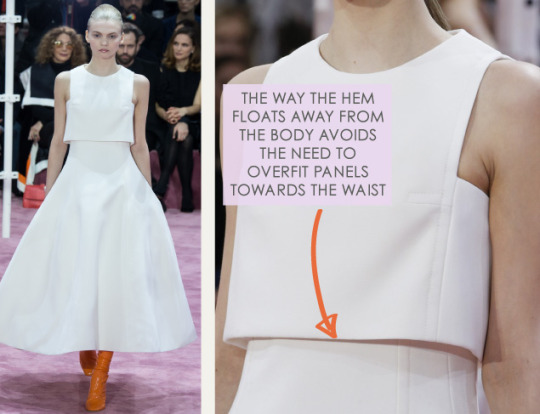 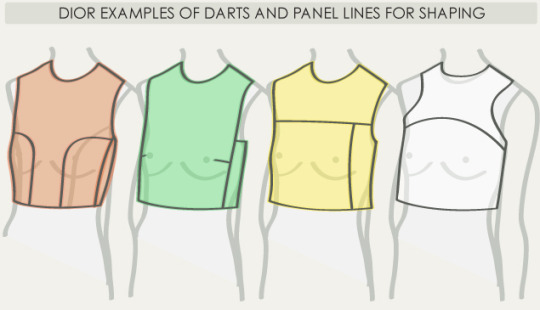 Images from Vogue.co.uk» Diagrams by The Cutting Class»