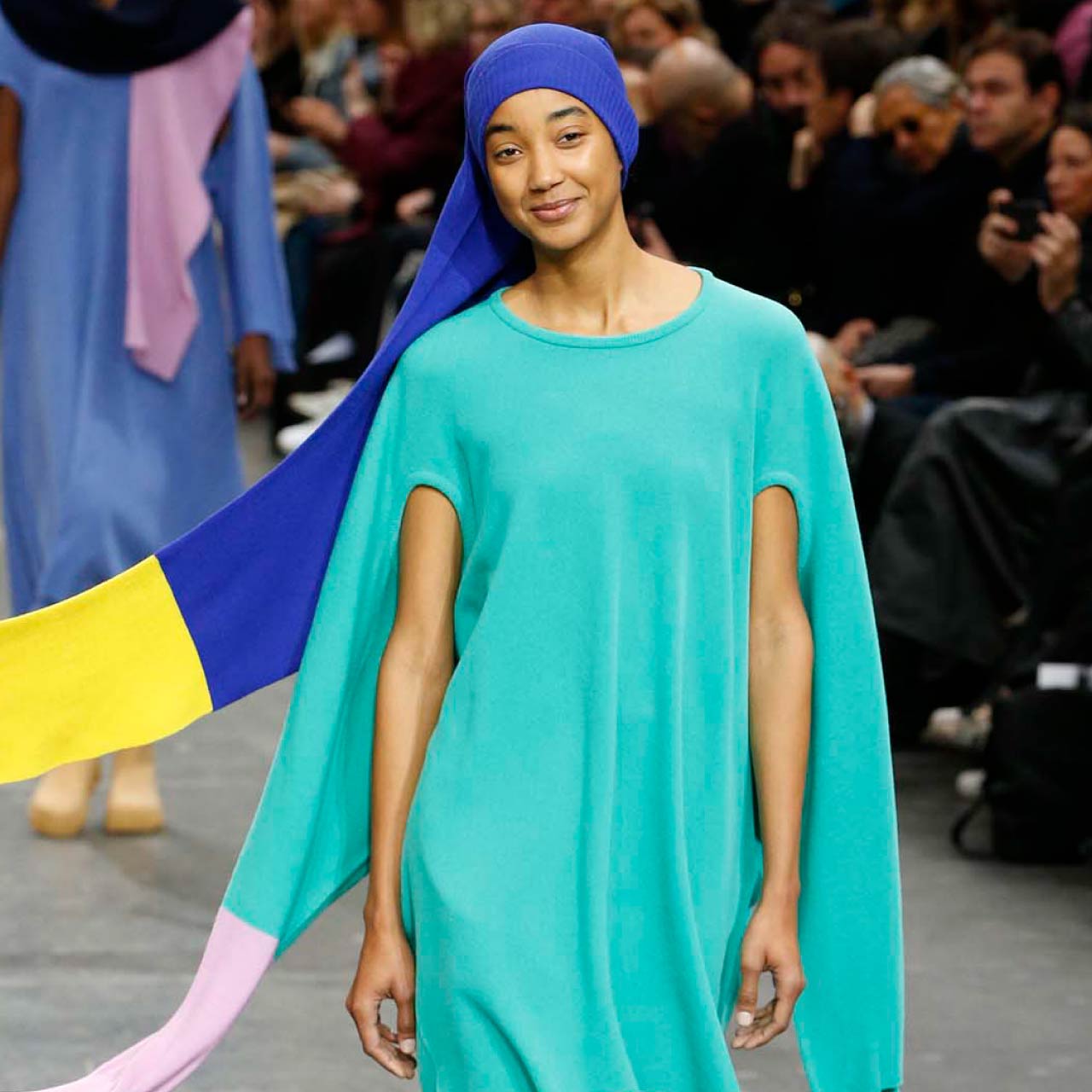 The Issey Miyake Autumn-Winter 2020 collection led by designer Satoshi Kondo, was made up of a series of smaller stories. These stories explored the “words and feelings derived naturally from the process of making things by hand” as a series of mini-collections with interconnected details.

Overall, this resulted in a collection of quite disparate elements and on the surface, you can’t quite picture how some of the looks will live comfortably on a rack side-by-side with each other. However, you can imagine how these different stories of clothes are used by brands as drops of clothes over the course of a season, carefully merchandised to overlap and complement each other in stores. And in a construction sense, you can see how elements echo across the collection and build on the central theme, in this case, the idea of making by hand.

A selection of the different stories have been shown here to give you a sense of the variety of ideas, and the way the construction elements cross-pollinate between garments, and indeed build on previous collections and the A-POC ethos (A Piece of Cloth). 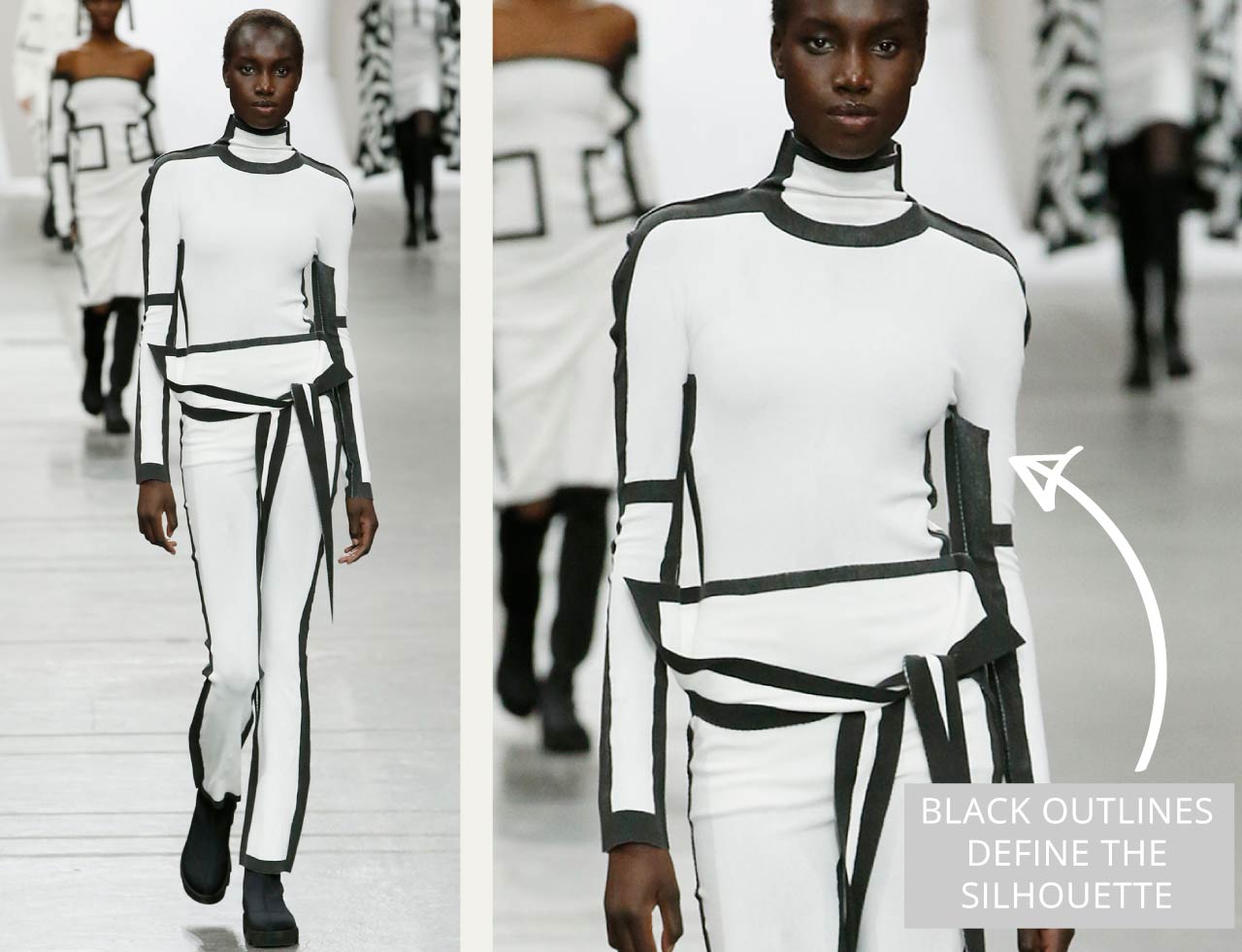 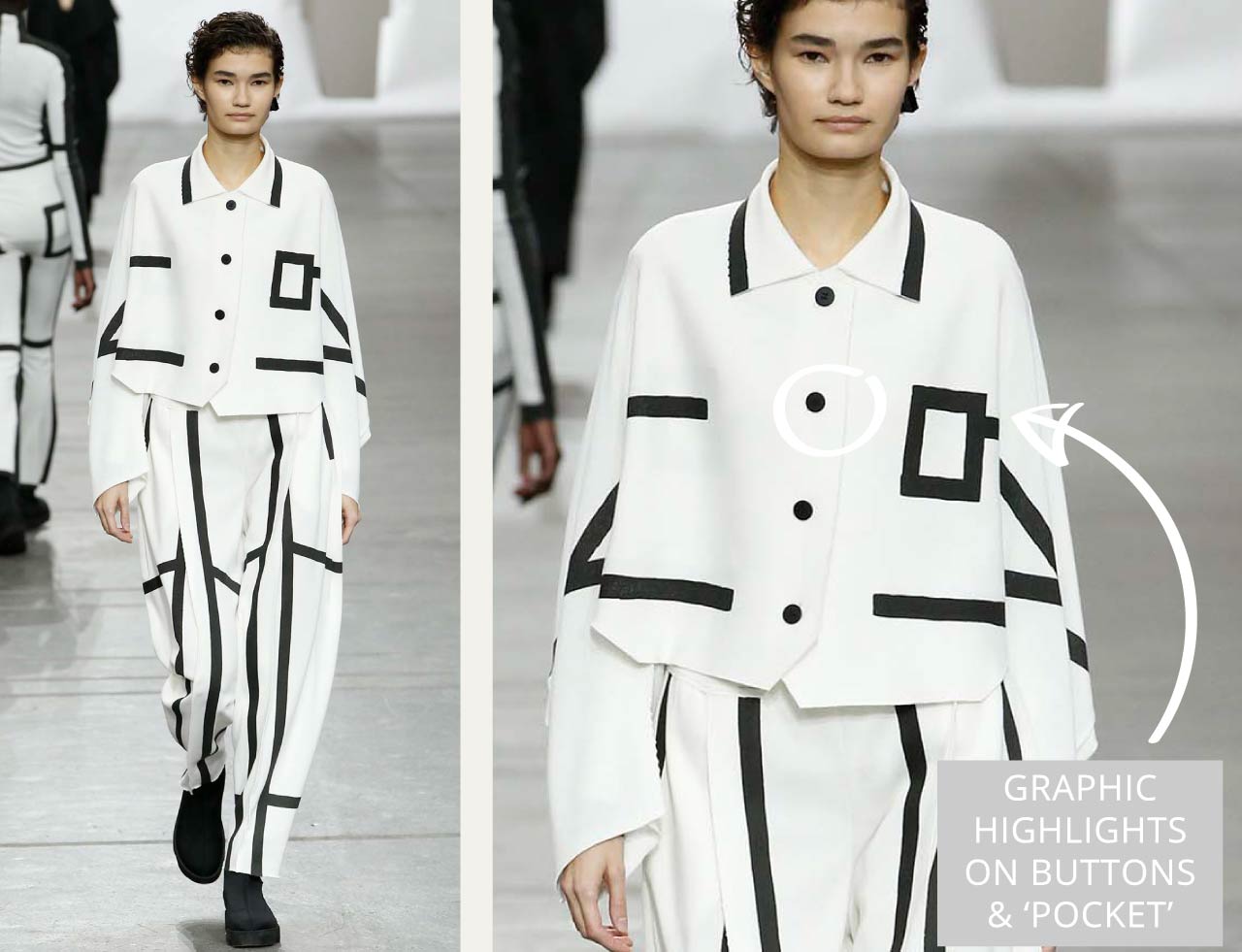 A series of graphic looks utilised the A-POC system so that when flat they are playfully outlined and delineated by wide black stripes. When on the body, these stripes outline the shape of the body or highlight garment details such as pockets and collars. The use of black buttons also adds a nice graphic touch, where the geometry of the circles complements the stripes. 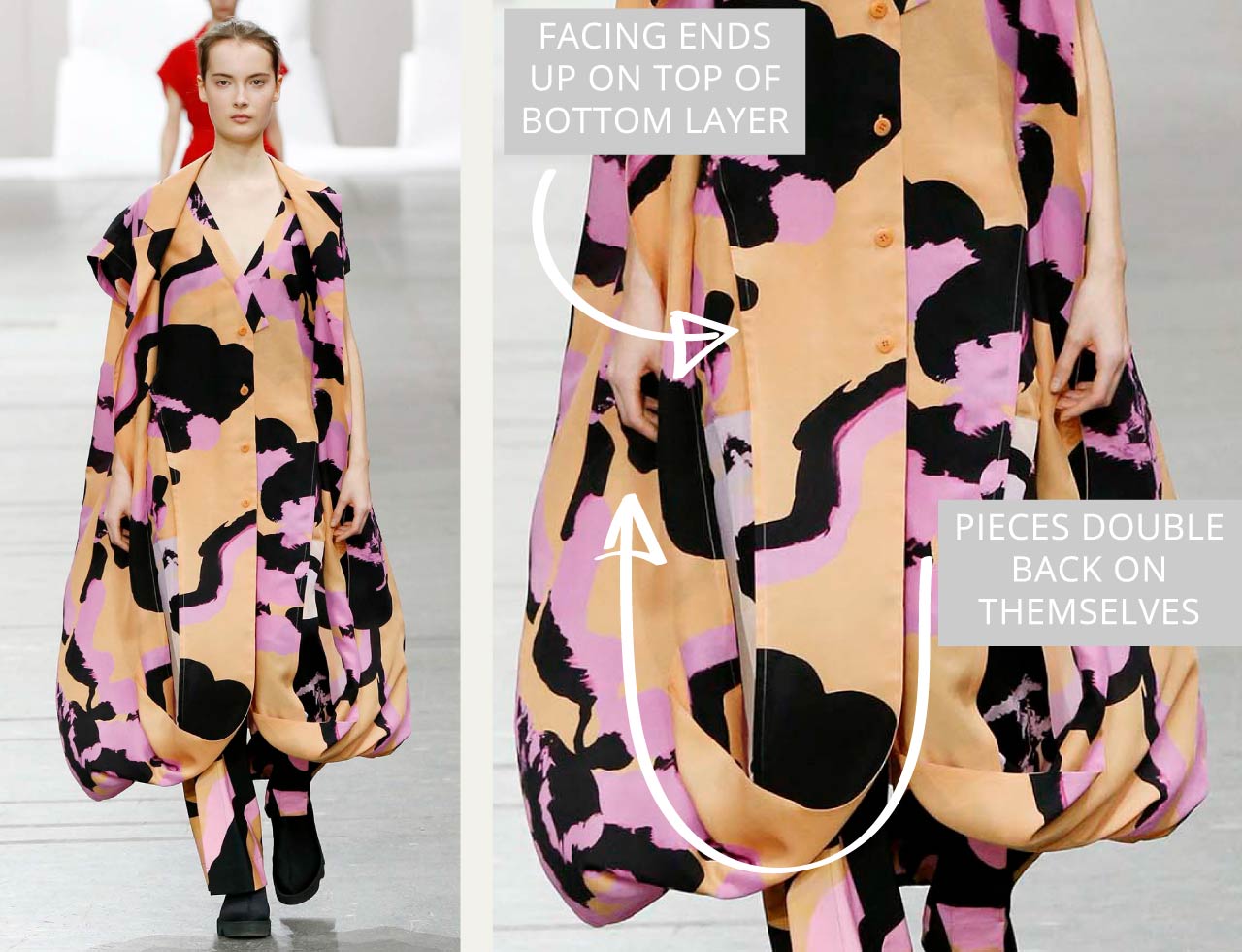 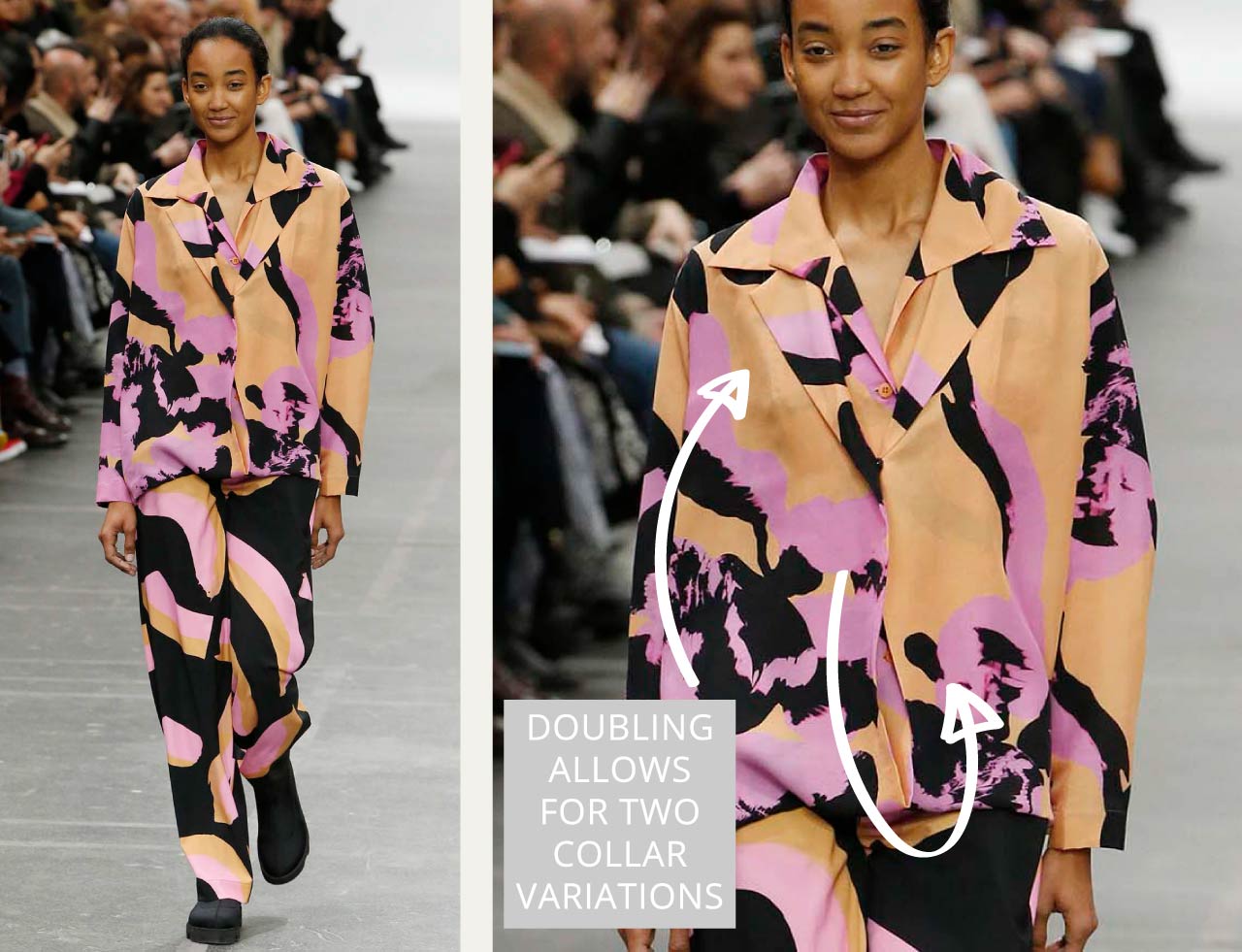 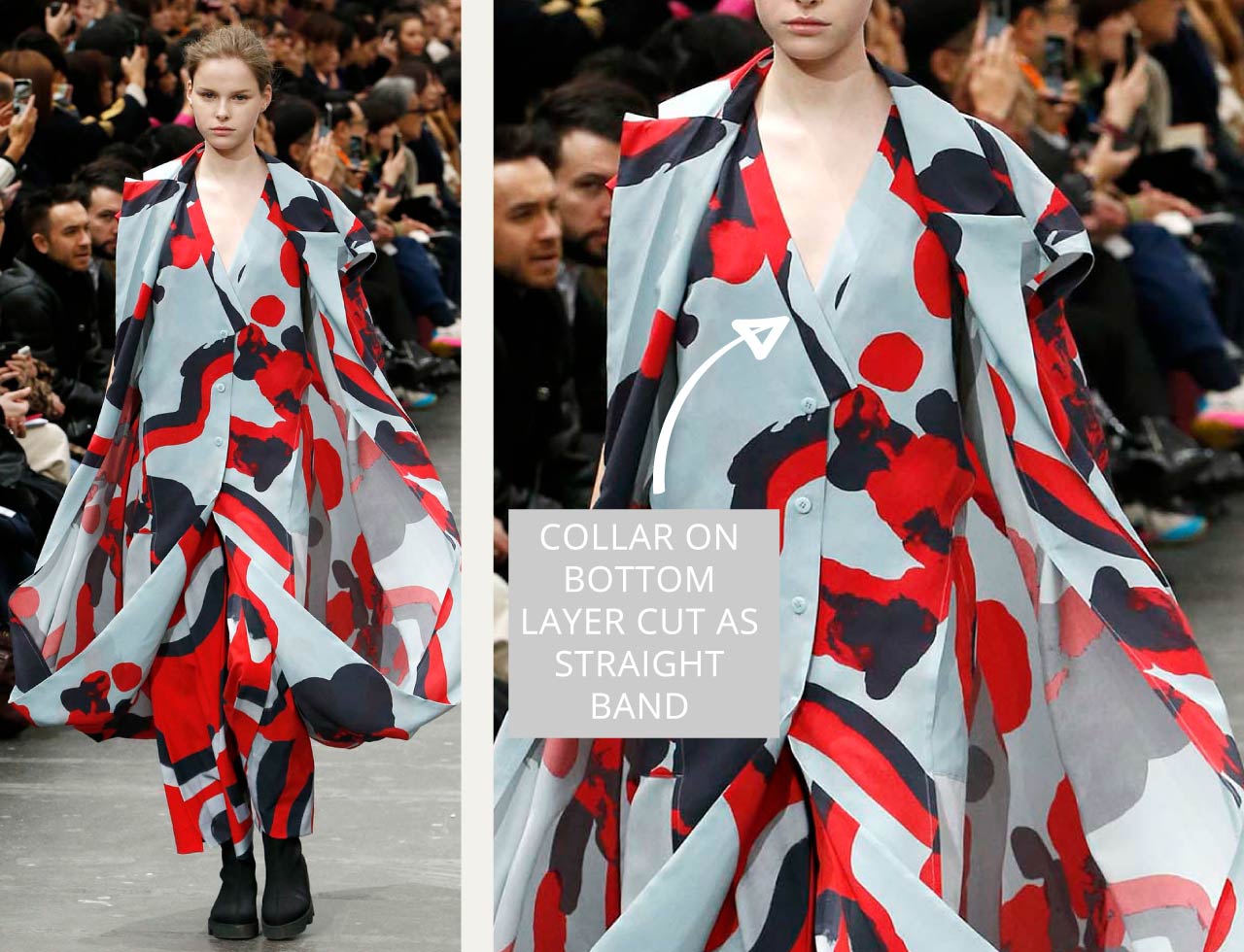 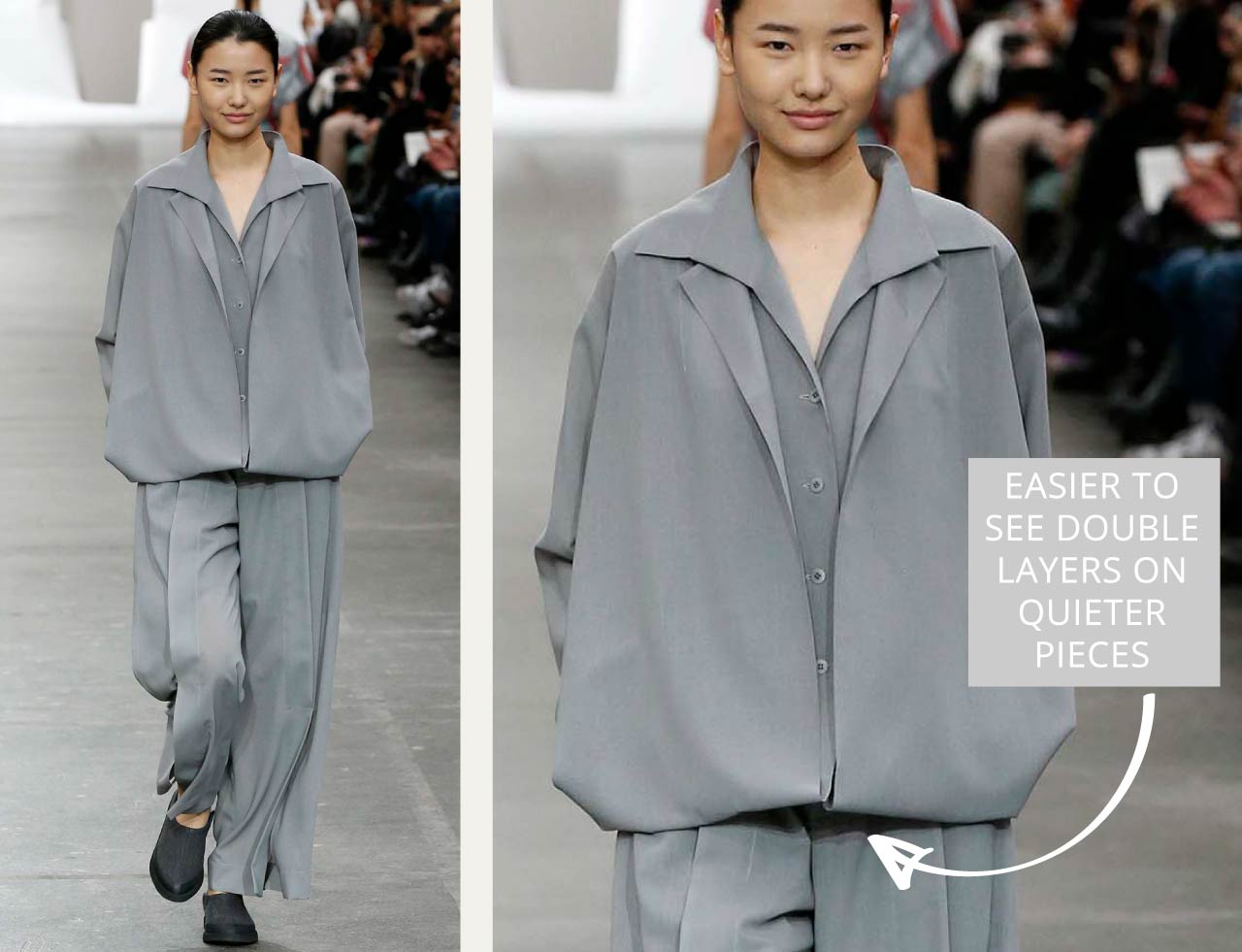 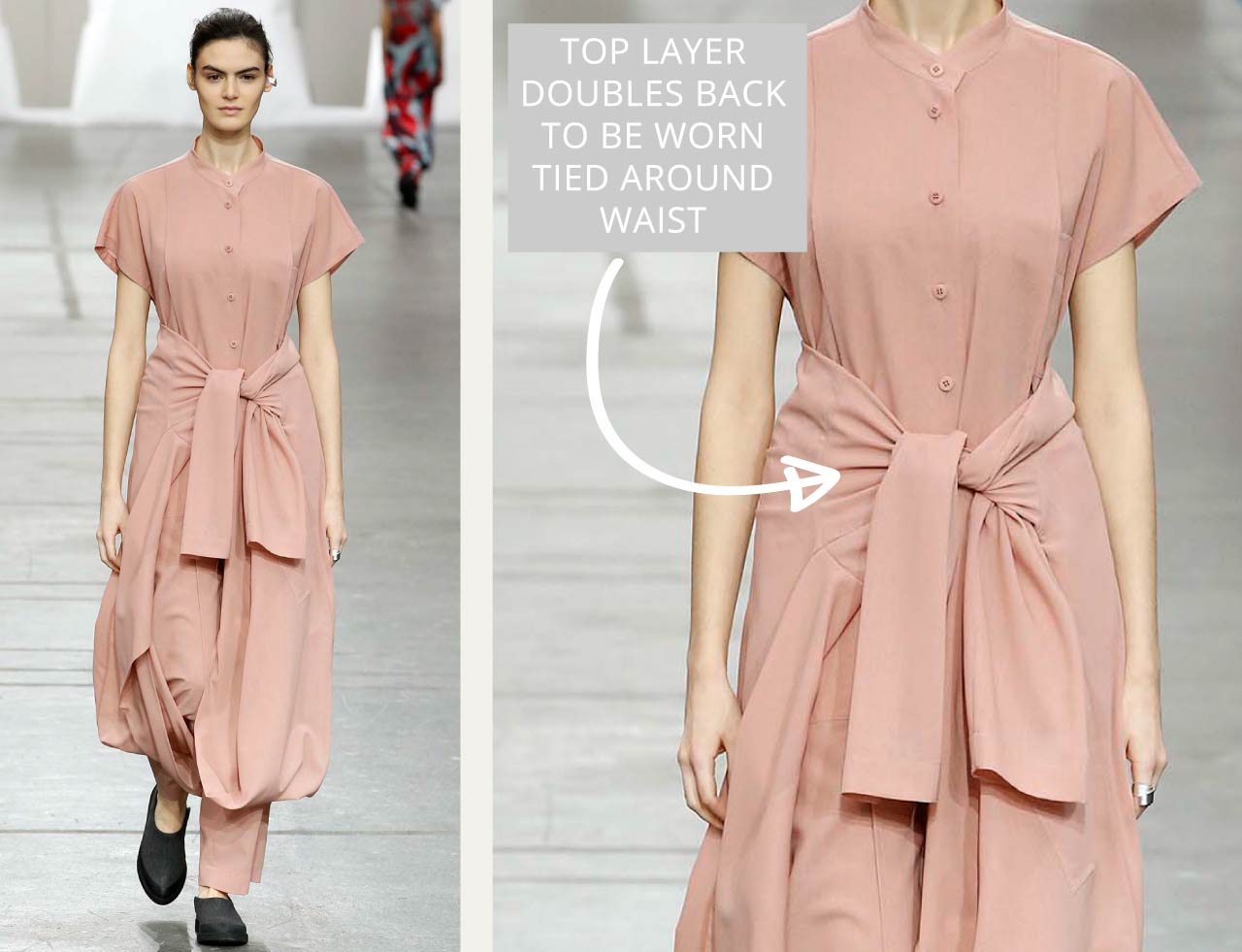 Another series of pieces centres on the concept of garments that are comprised of double layers that loop back on themselves. The bottom and top layers often feature separate collar and neckline styles to give the appearance of multiple layers of garments worn together in the same fabrication.

Note that in some cases, the bottom garment layer is finished with a centre front facing, so the facing finishes the front edge and is visible on the garment, rather than being hidden on the inside of the garment out of view. As the bottom layer doubles back on itself, this facing is then also doubled back on itself to be hidden from view on the top/outer layer of the garment. 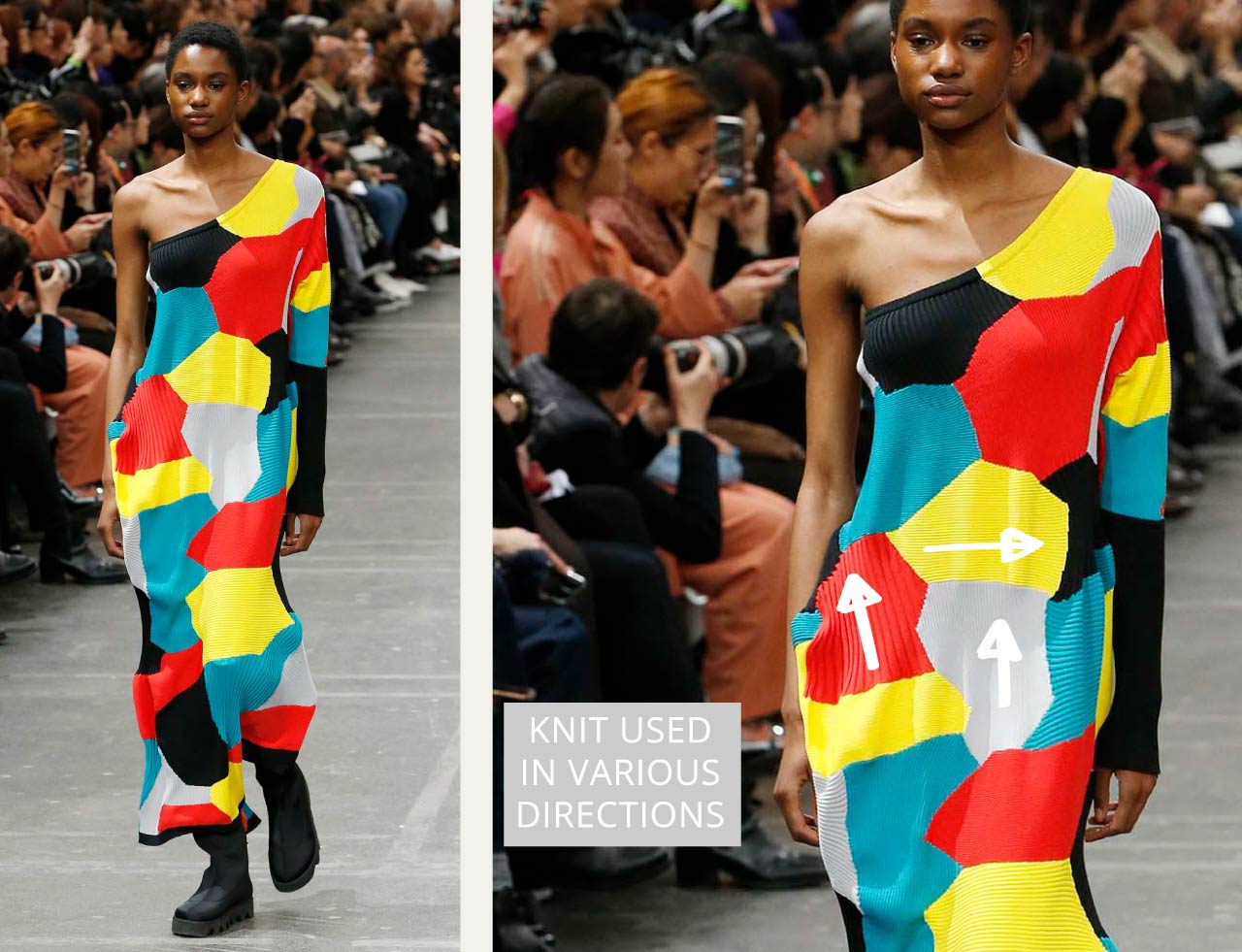 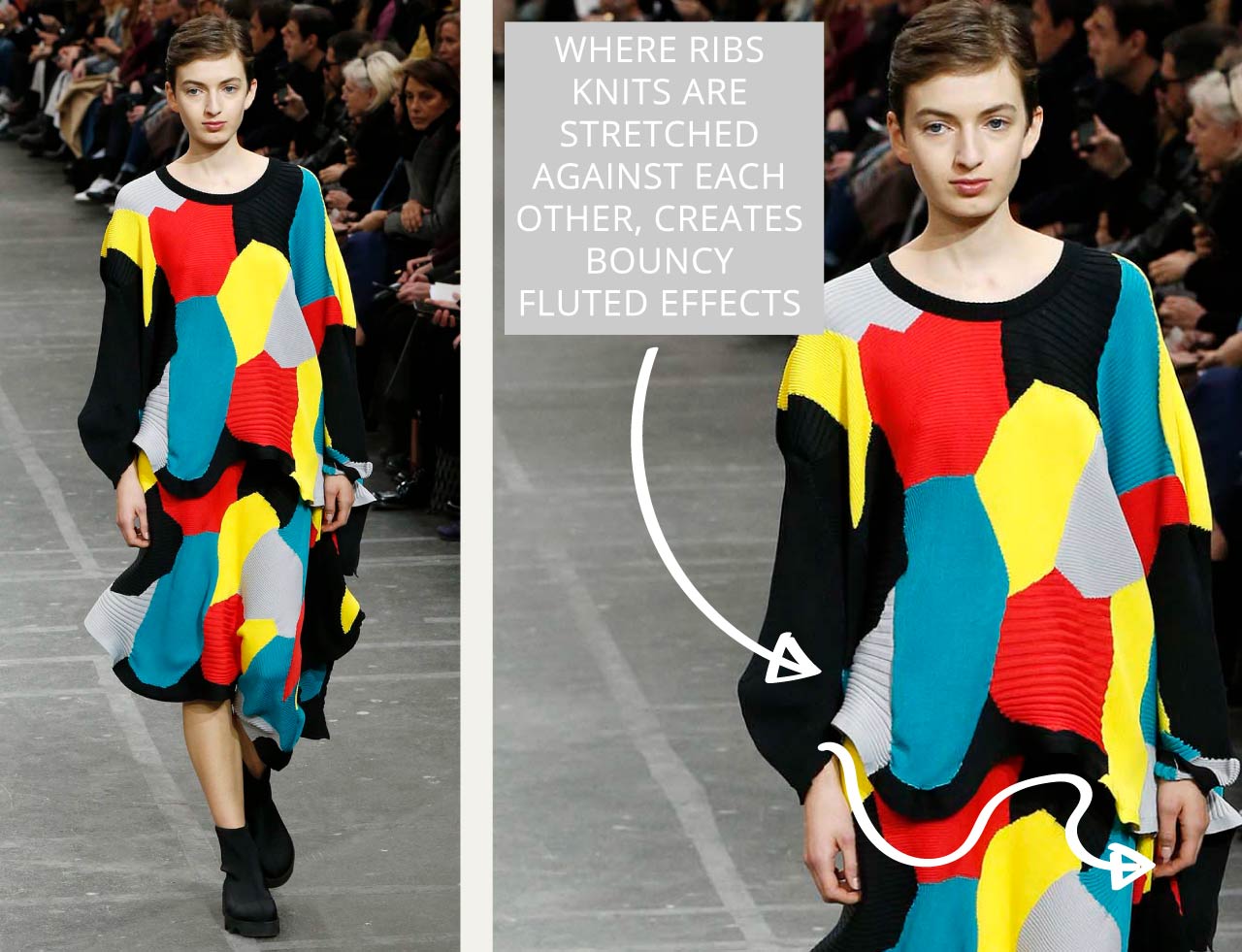 Another series was inspired by the idea of multiple blocks of clay smushed together, resulting in a variety of knits arranged in different directions but that were knit in a single run. This creates tension between the different pieces as the ribs of the knit areas stretch and compress against each other, sometimes resulting in bouncy 3D forms and wavy hems. 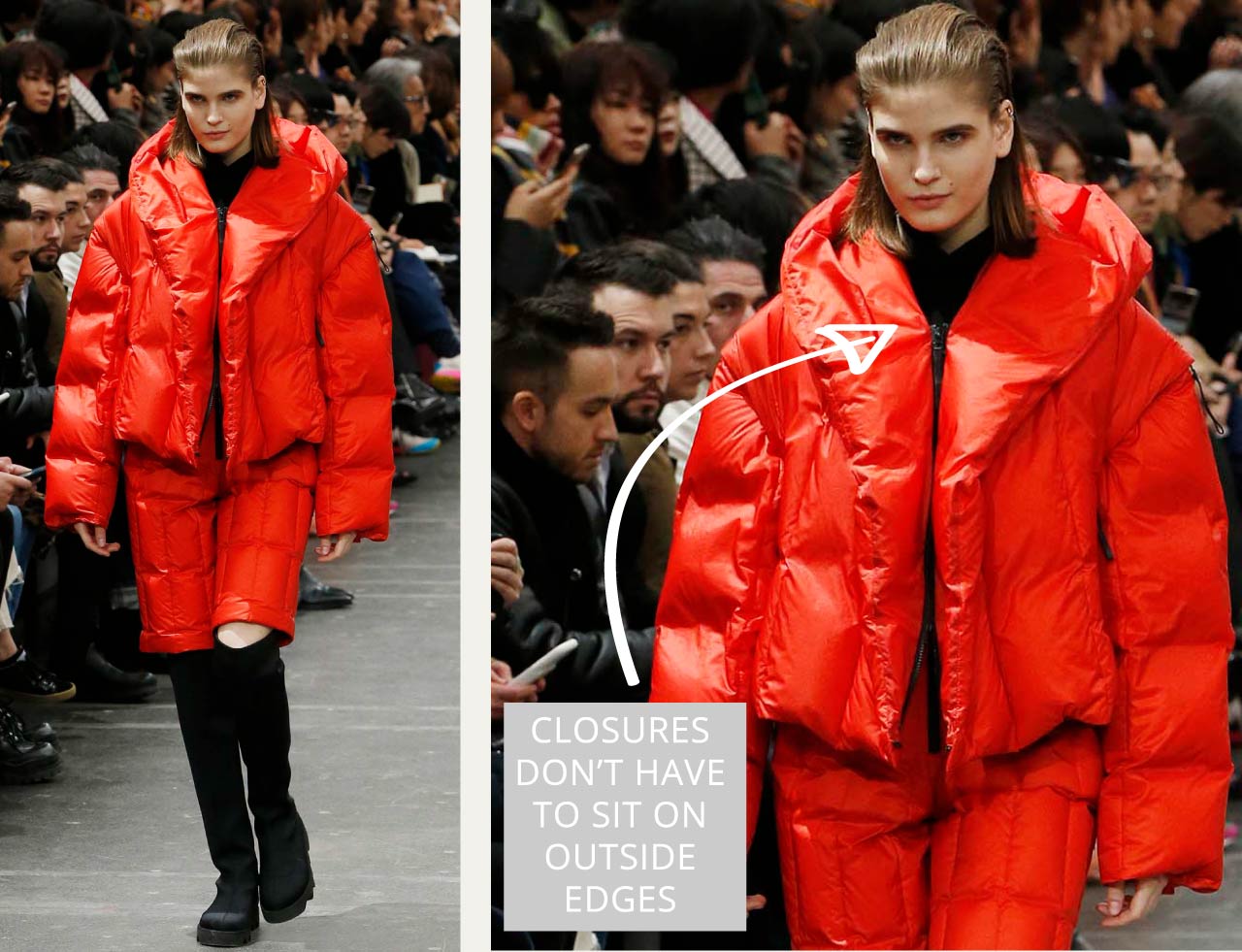 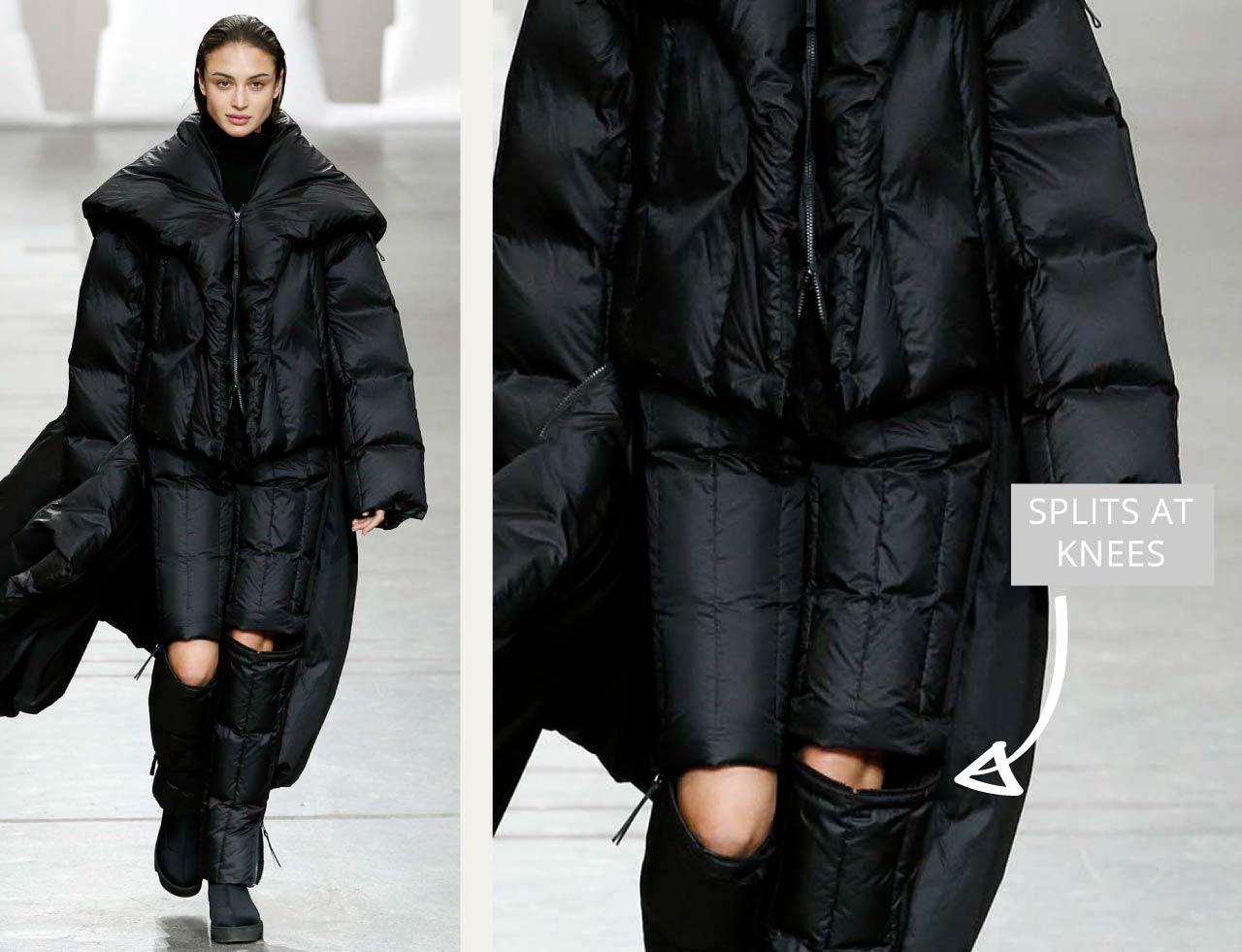 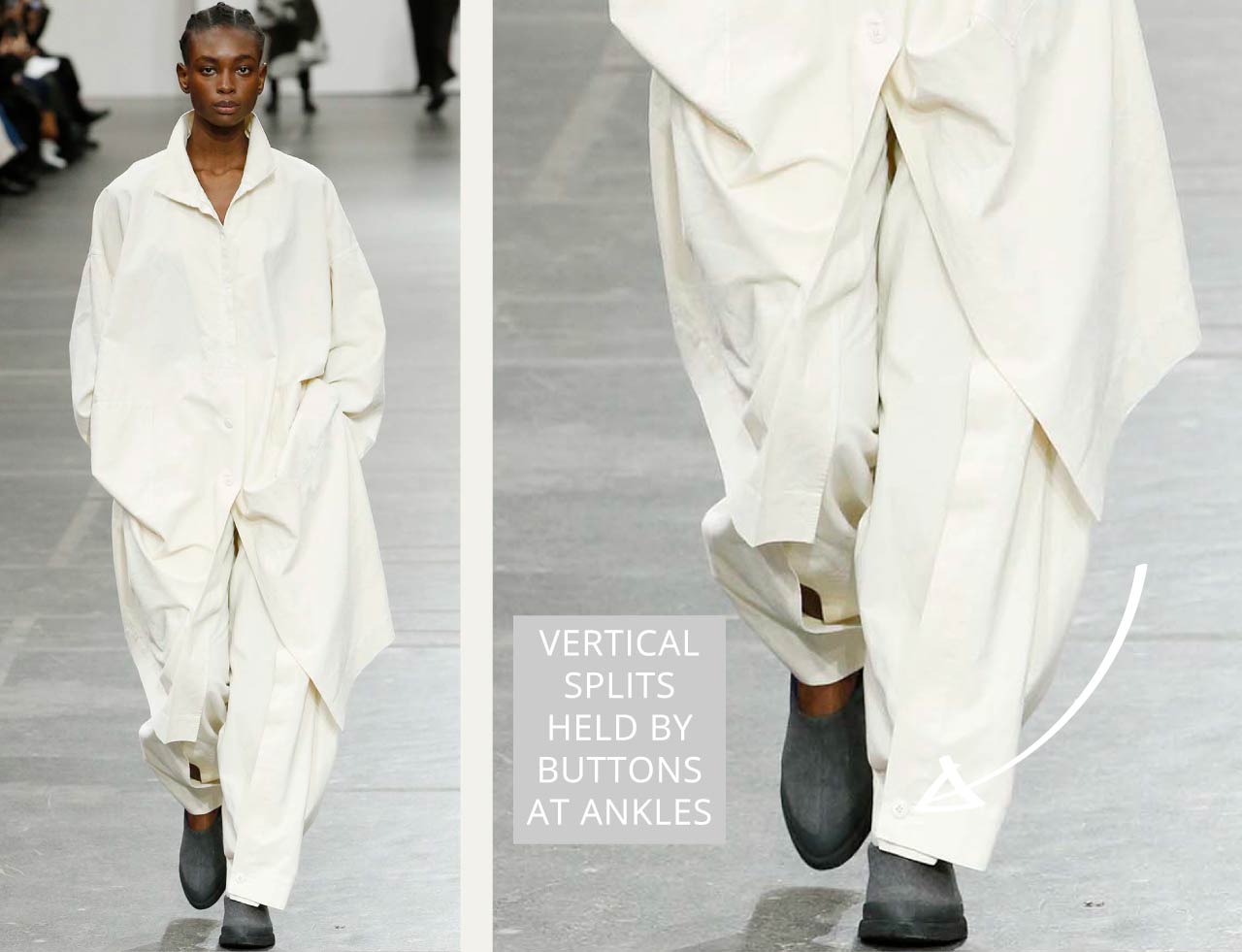 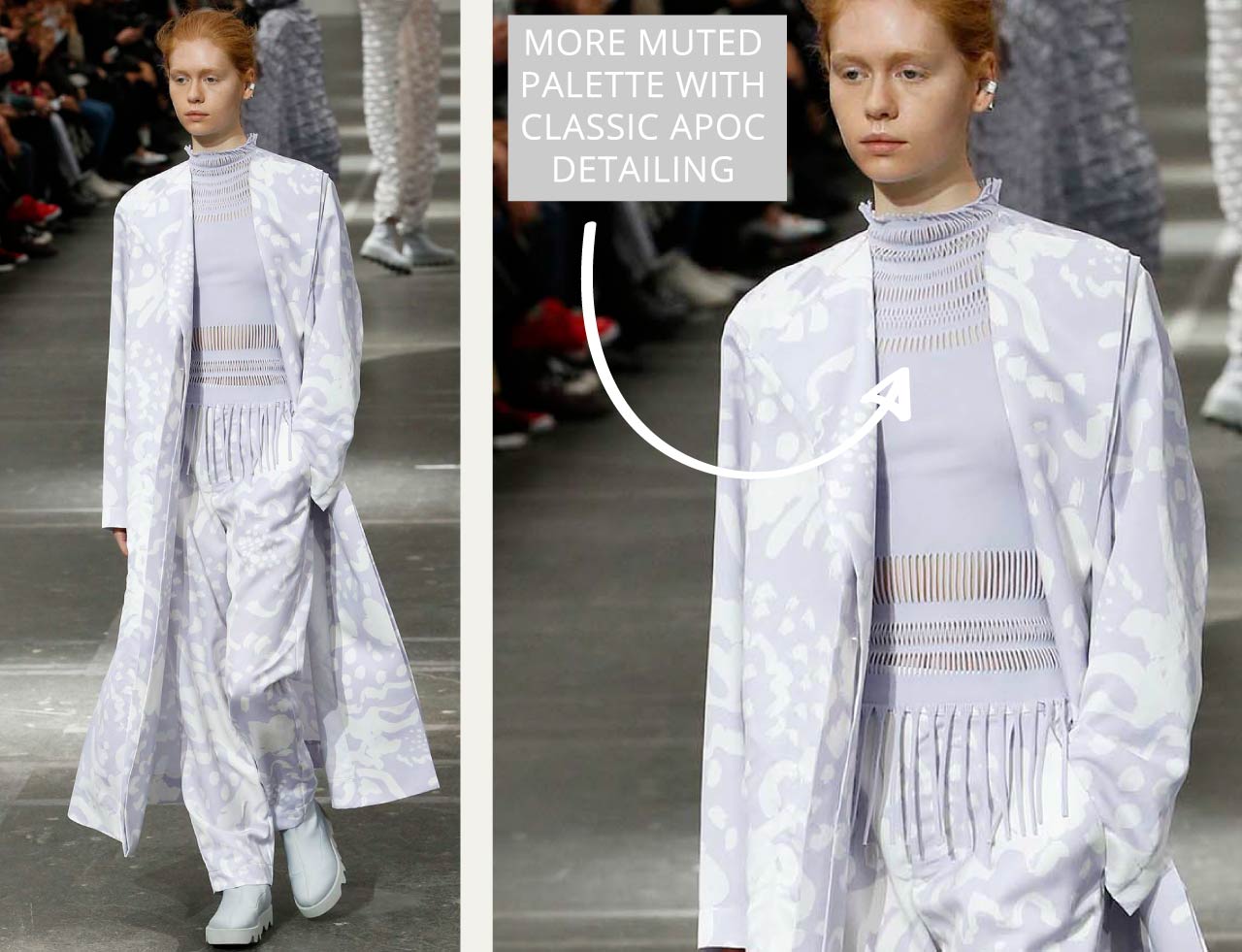 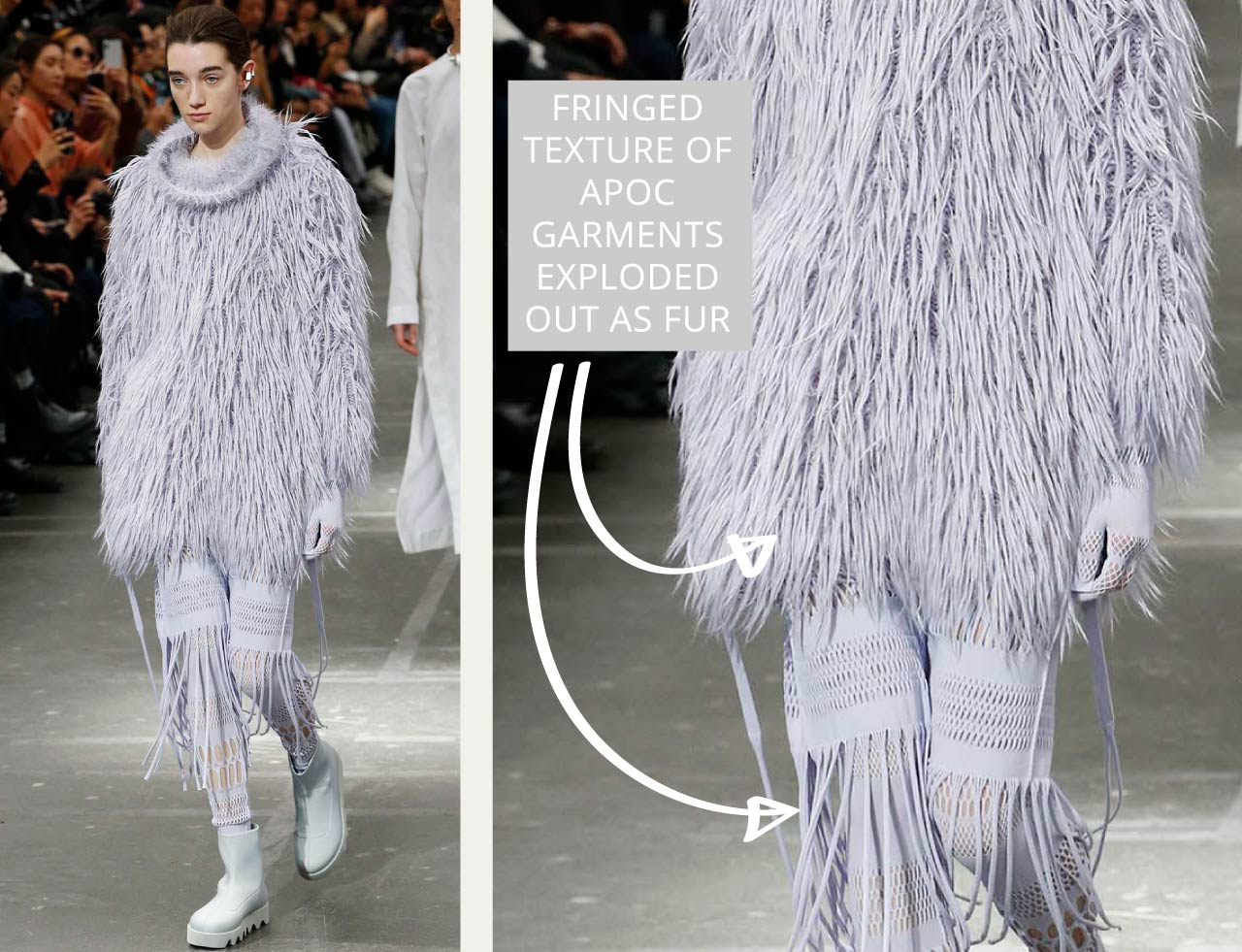 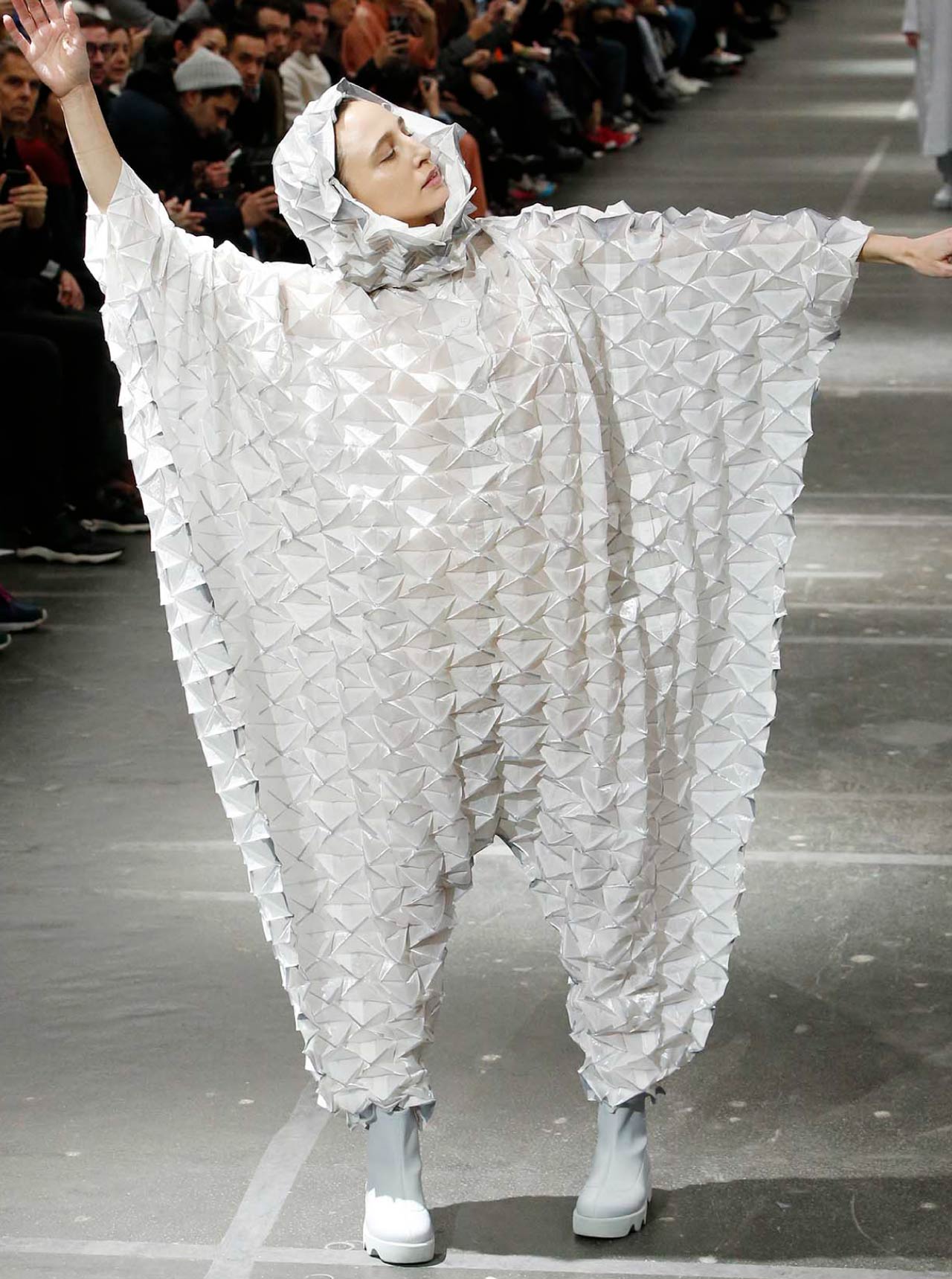 A variety of other ideas and pieces were also interspersed through the collection, often building on existing Issey Miyake brand tropes of cut-outs, pleating, A-POC detailing and unusual pattern cutting.

The culmination of the collection was in a series of interconnected knits that were knit as a single continuous run and could be worn by multiple people at the same time. These varied from soft, tonal pieces in neutral colours, to vibrant colour blocking. 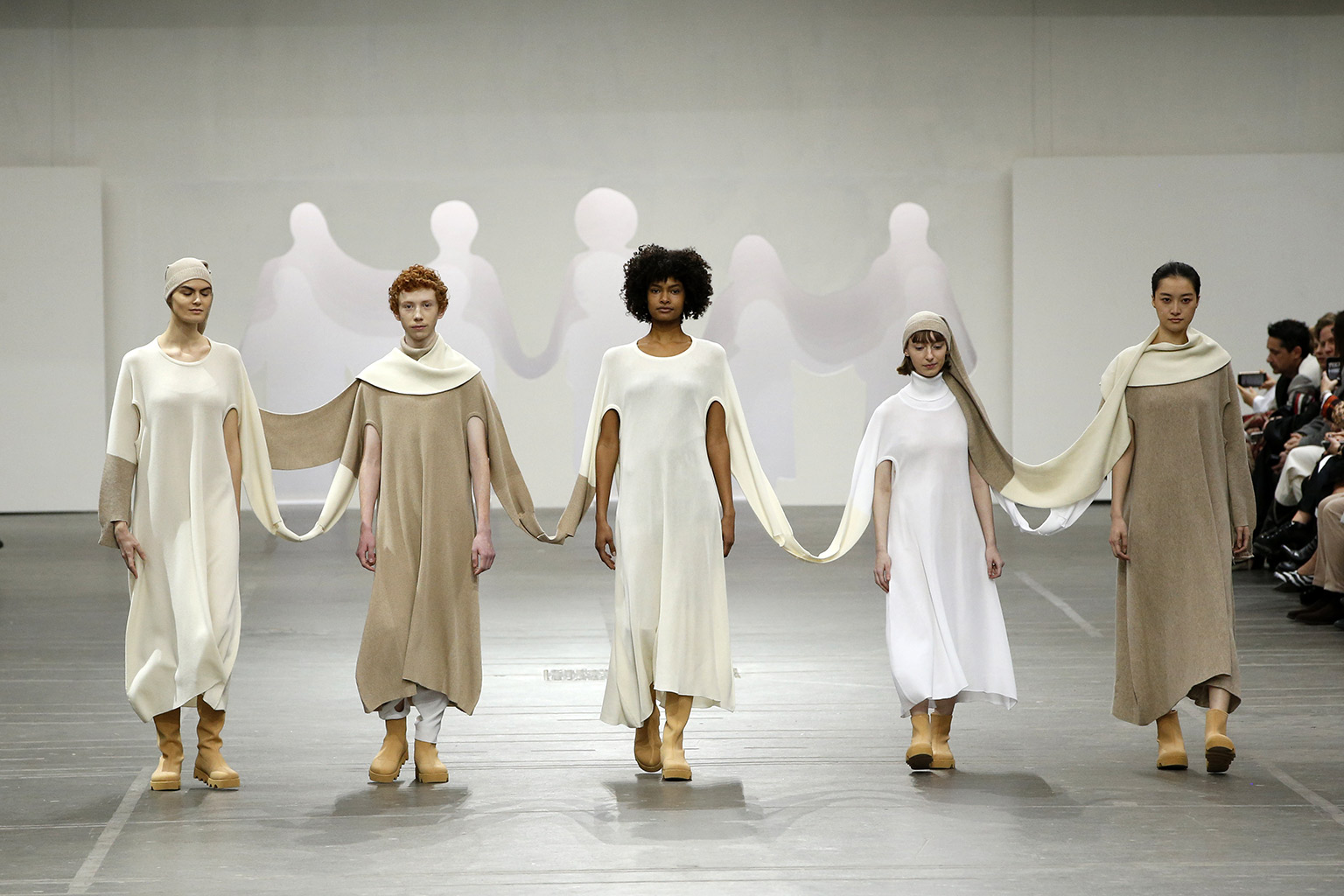 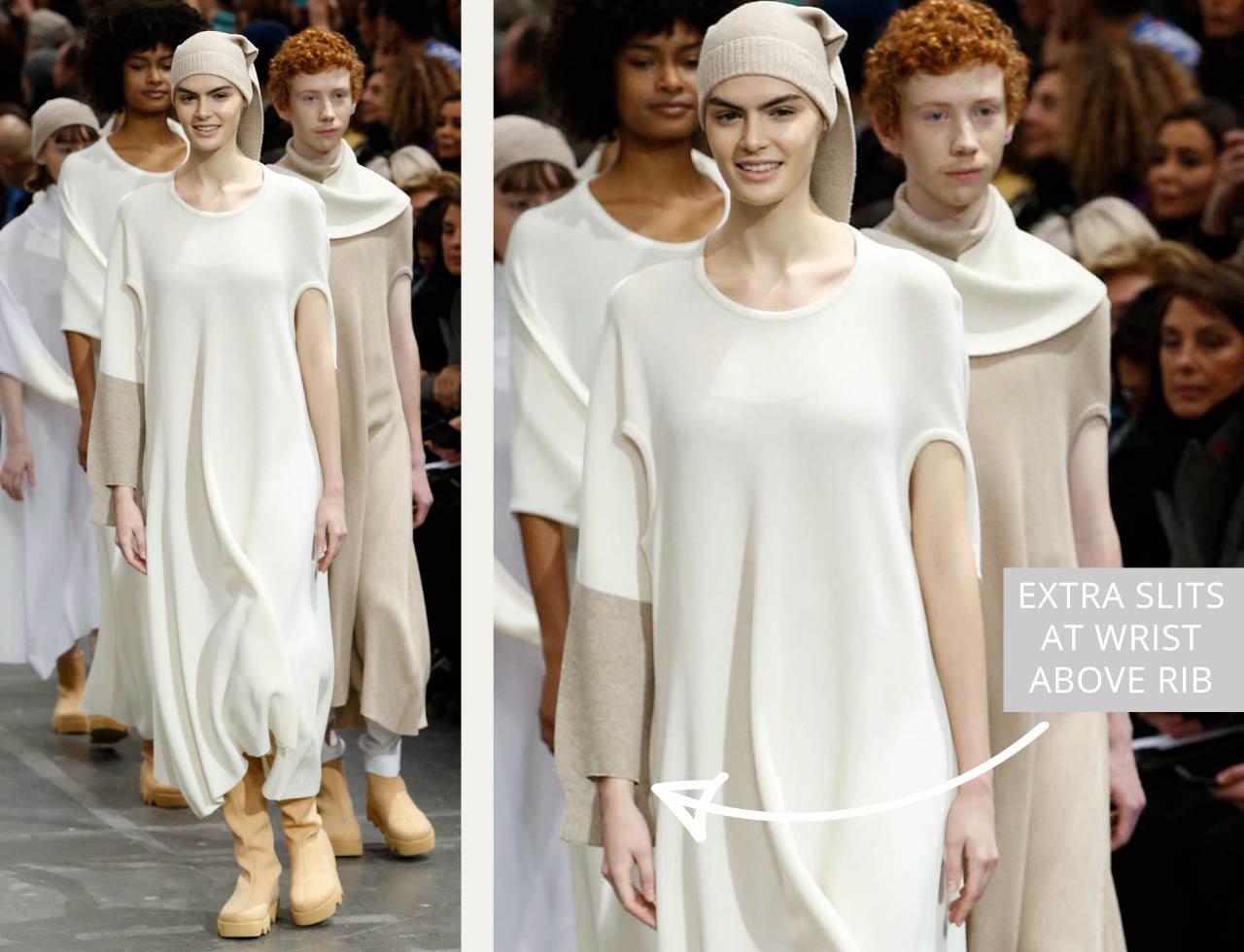 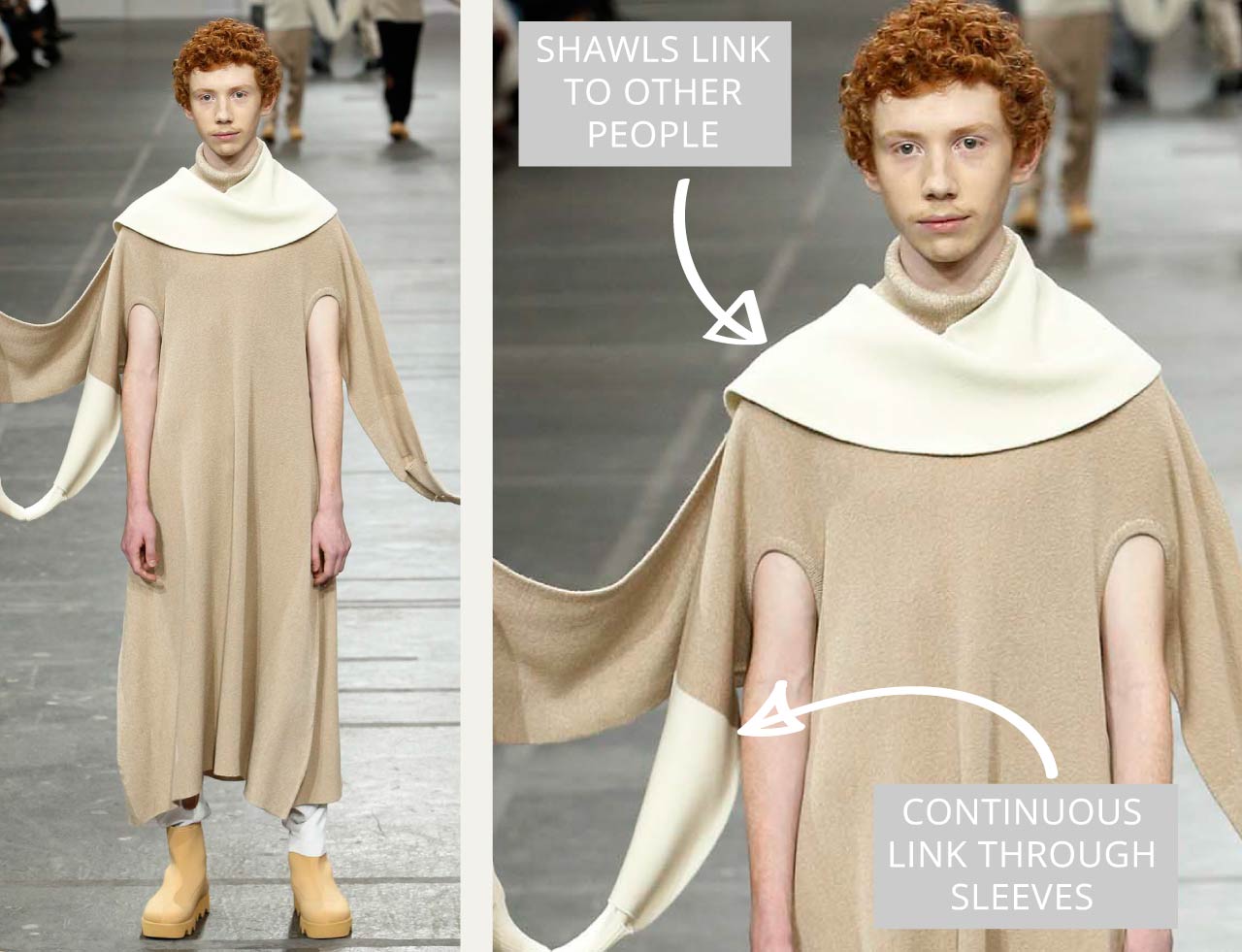 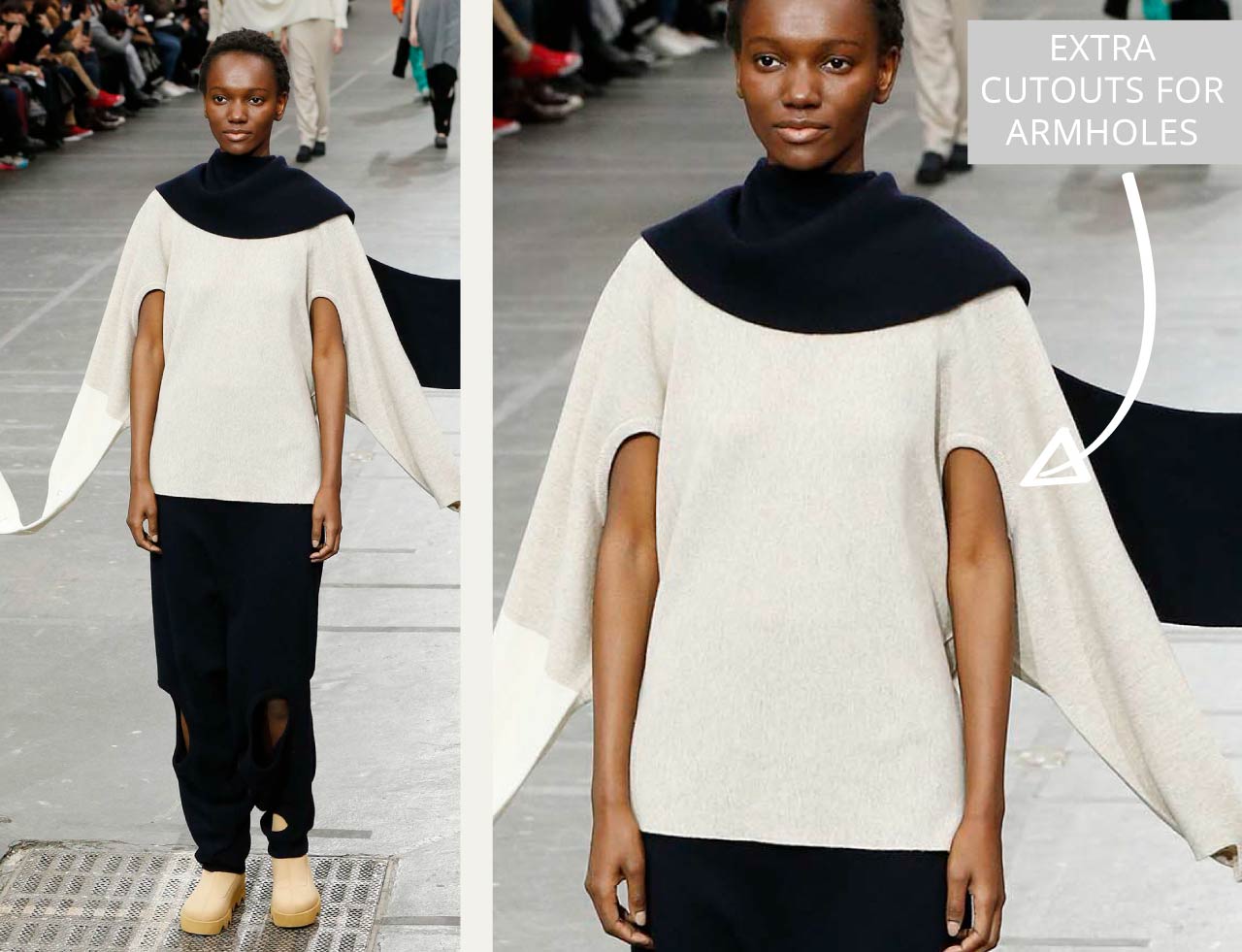 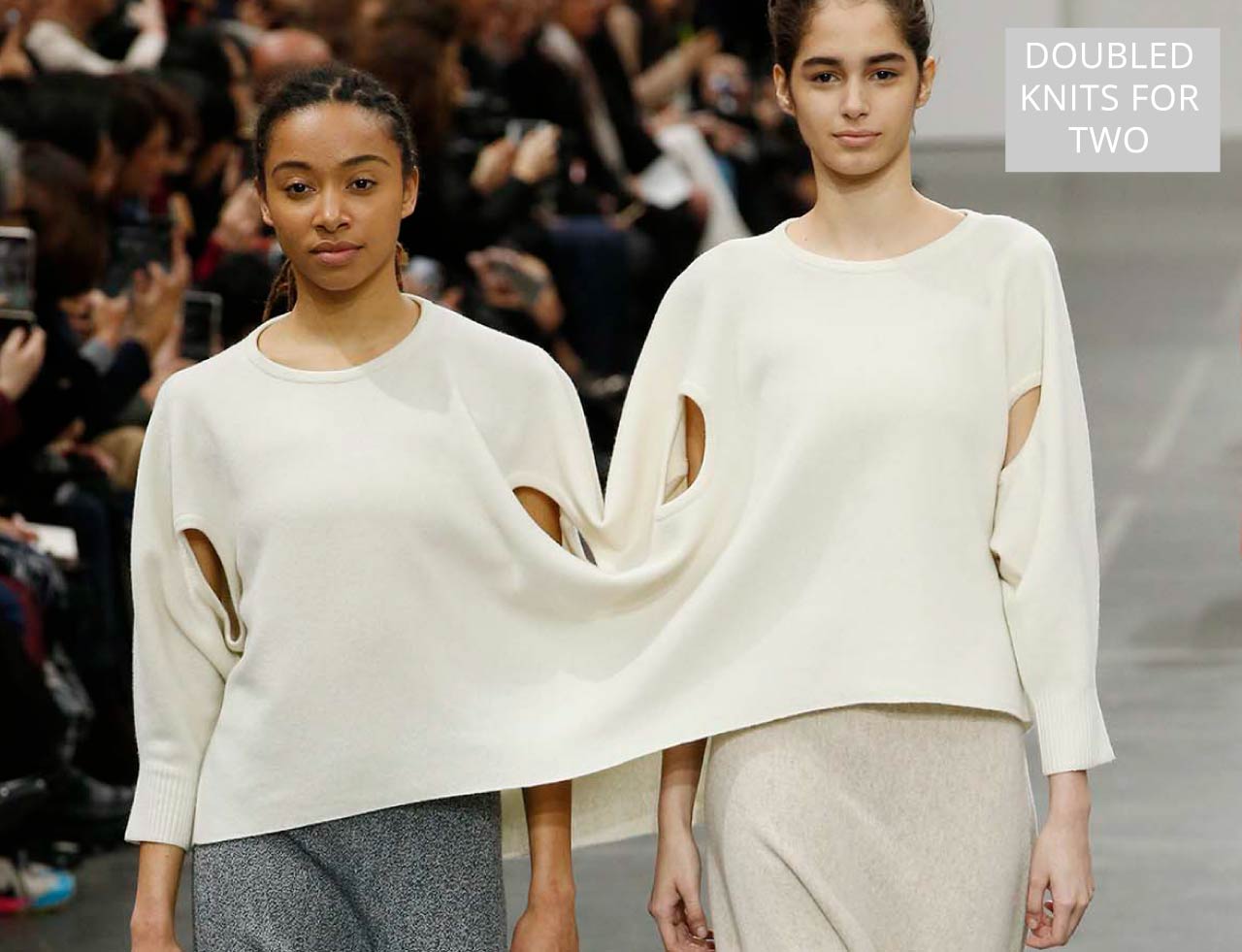 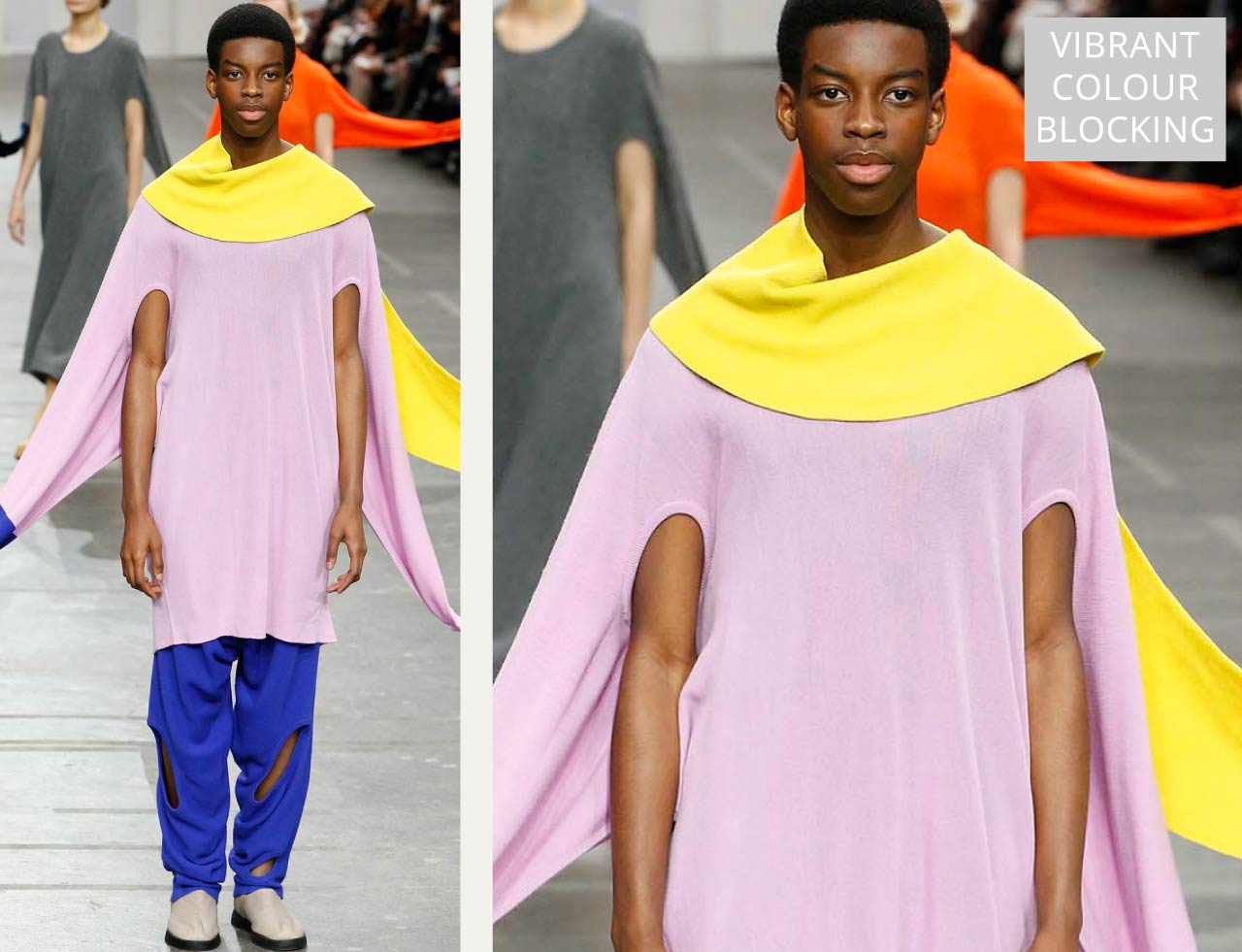 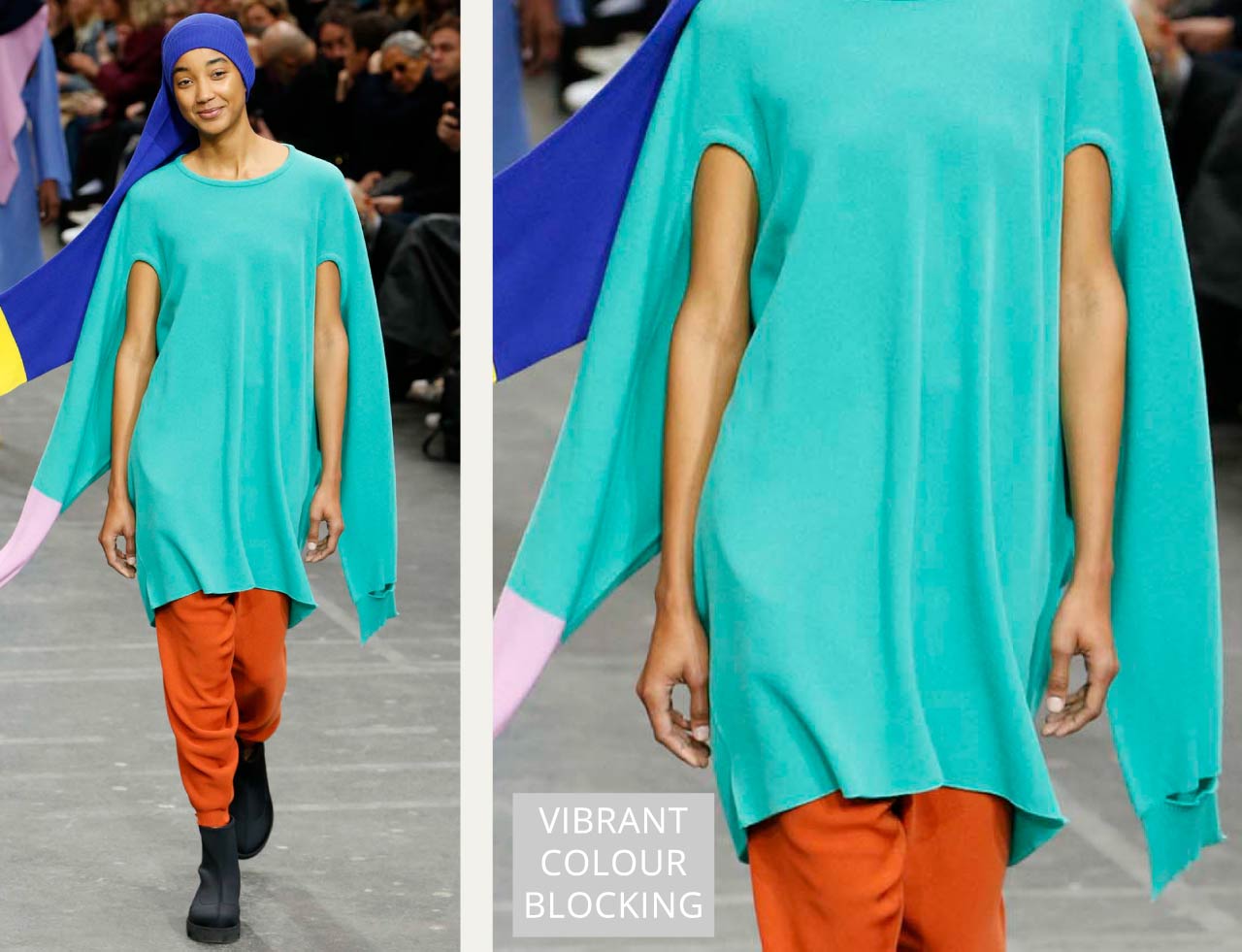 The Issey Miyake collection description explains this Hand in Hand series as:

Made with a seamless knitting technique, this series conveys the idea of connecting people to people, people to world, and people to the future, in a playful, continuous knit. The pieces in this series have additional openings designed with the intent to be worn in many different ways.

These pieces feature extra armhole cutouts at the underarms to allow the sleeves to be worn loose, and additional slits above the ribs at the wrists. Shawls from one garment link to the garment of a neighbour, and other pieces are designed to be worn for two. While in this finale context the extra openings facilitate the interlinked sleeves and garments by looping from one wearer to the next, as production-ready garments, these openings will still allow for the wearer to playfully arrange the garments in multiple ways. Considering that other pieces in the collection feature garments that are doubled up on themselves, you wonder if the final retail-ready production pieces (such as the knits for two people) will actually also be able to be doubled and worn as multiple layers on the one body.