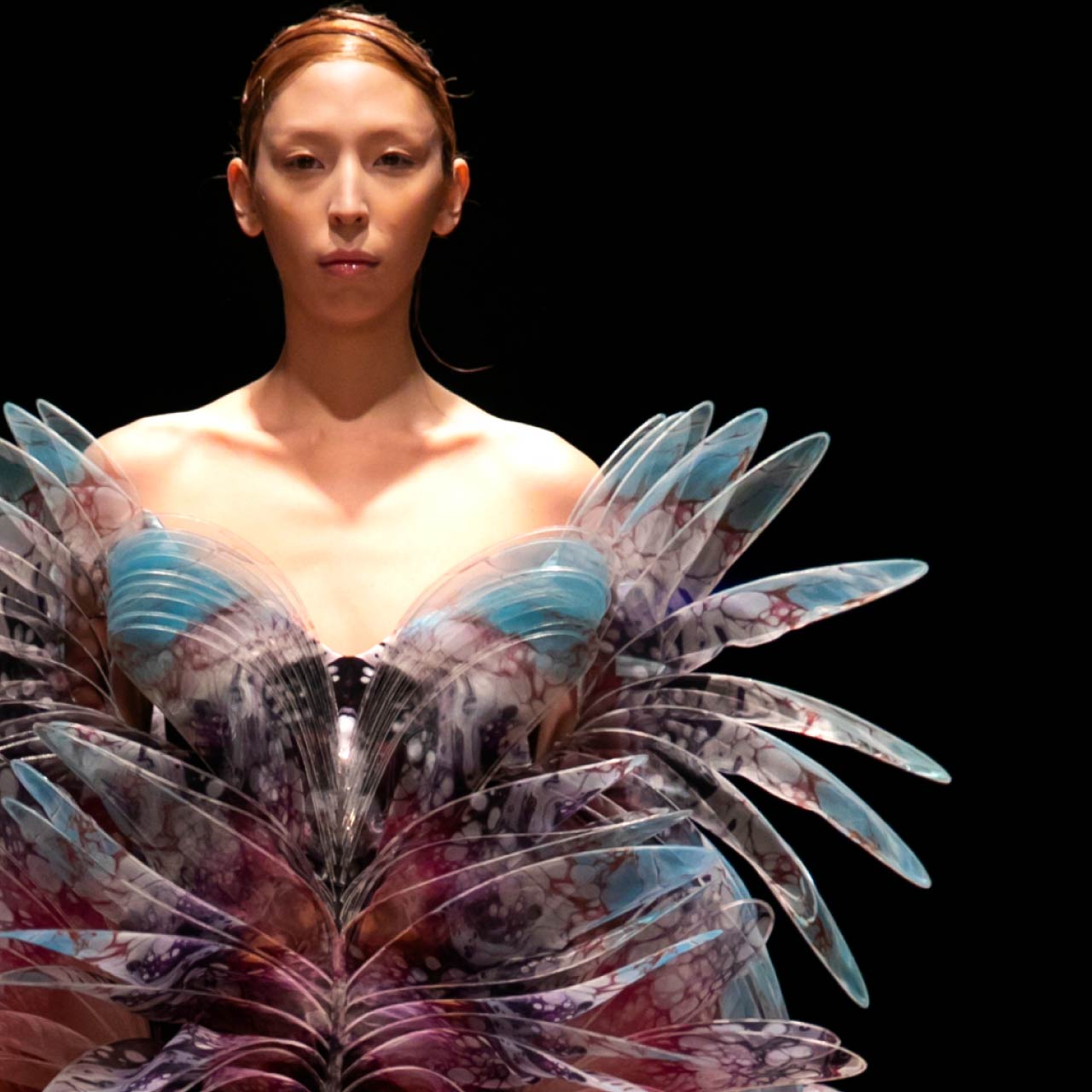 There is a certain romanticised view of what haute couture entails – hard-working ateliers full of petite mains, painstakingly cutting every last snip of fabric, and sewing every last stitch by hand. There is a place in fashion, of course, for this preservation of tradition, but in 2020 there also needs to be an embrace of the contemporary couture techniques offered by designers such as Iris van Herpen. A version of couture where more modern fashion techniques and tools such as 3D modelling, 3D printing, laser cutting and automation are brought to the forefront.

The Spring-Summer 2020 Couture collection from Iris van Herpen, entitled ‘Sensory Seas’ encompasses 21 looks that find a synergy between the details and movement of marine life, and within the branching dendrites» and synapses of the human body. The linework in the collection draws inspiration from the work of Spanish neuroanatomist Ramón y Cajal» who documented his view of the central nervous system through a microscope by producing detailed anatomical illustrations. 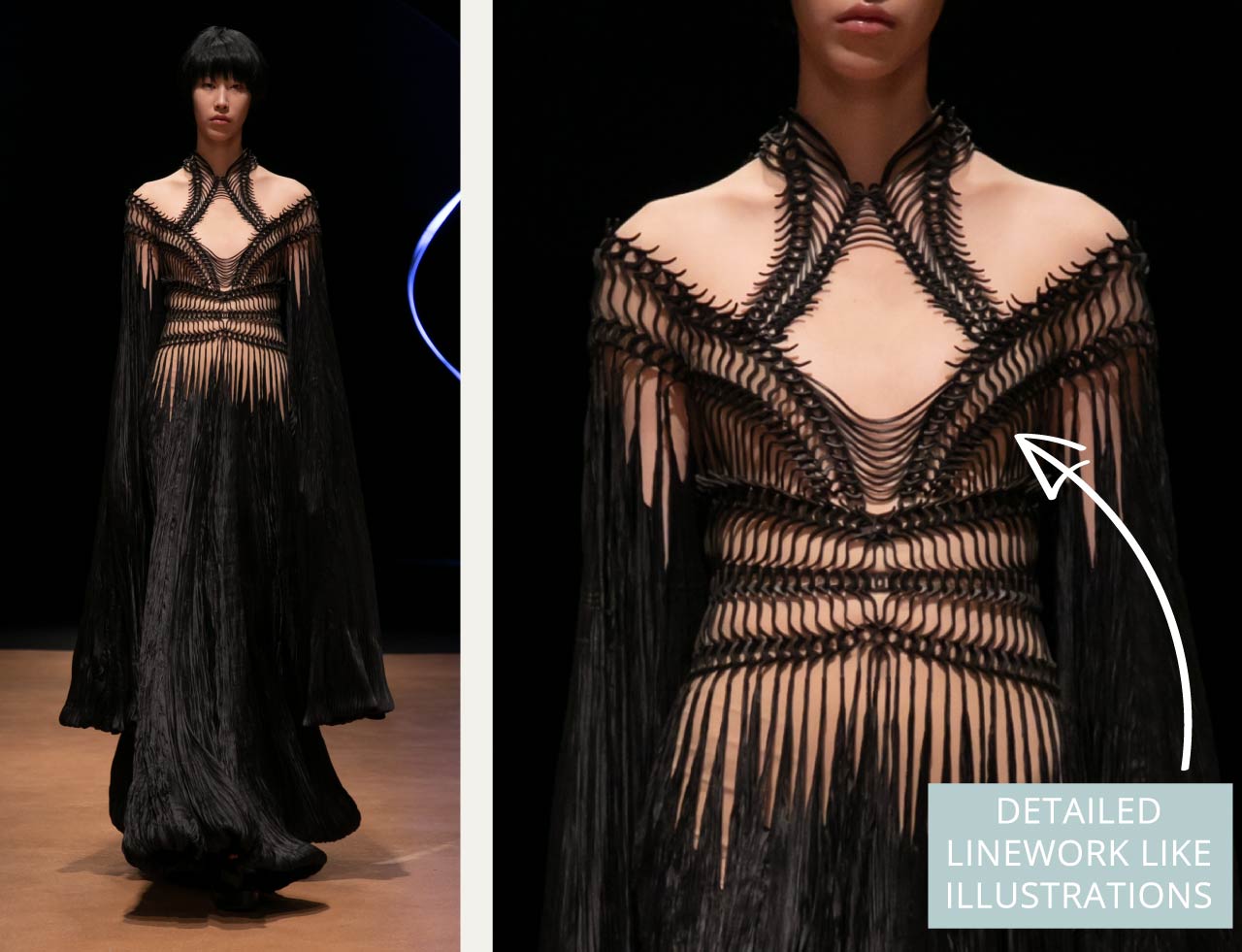 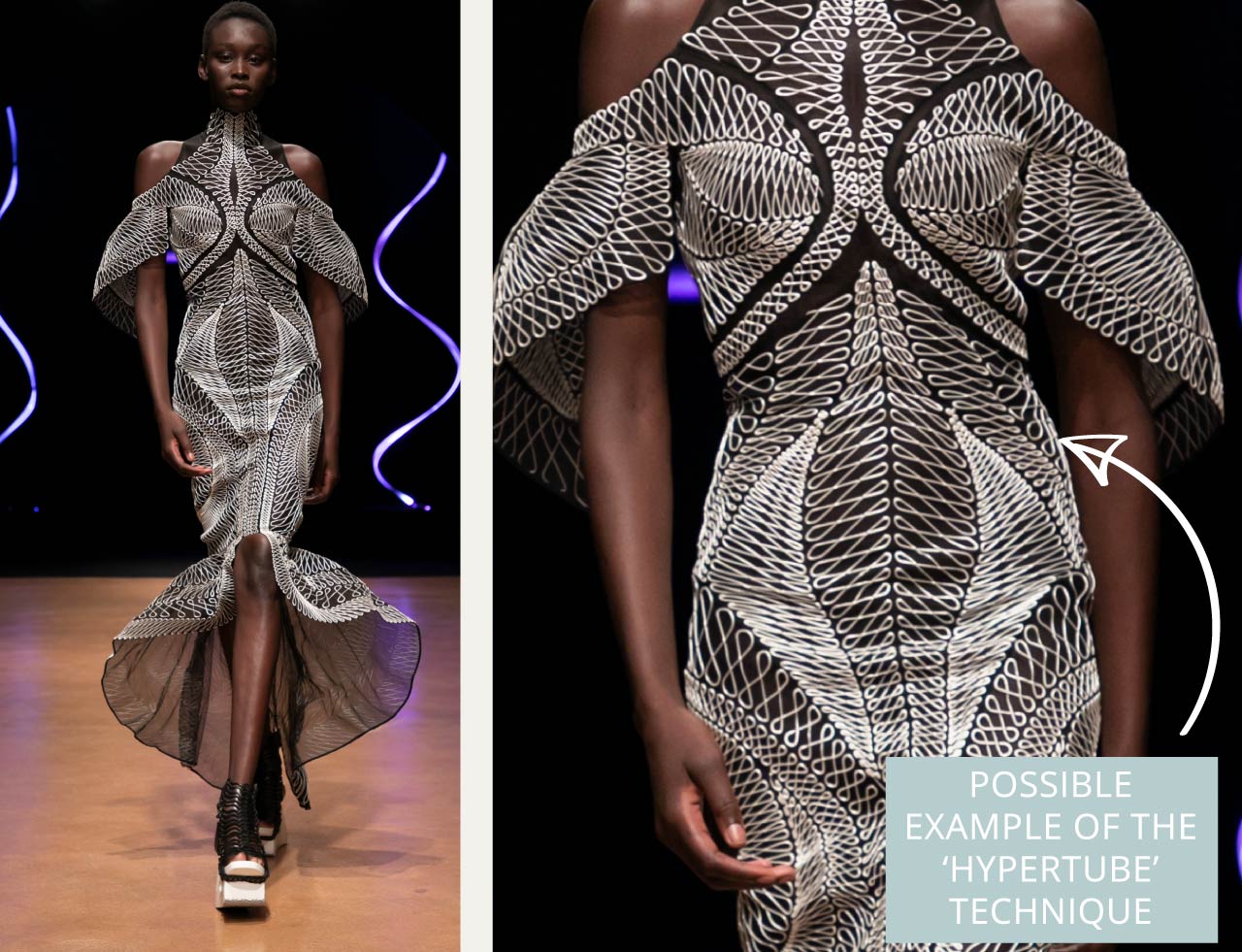 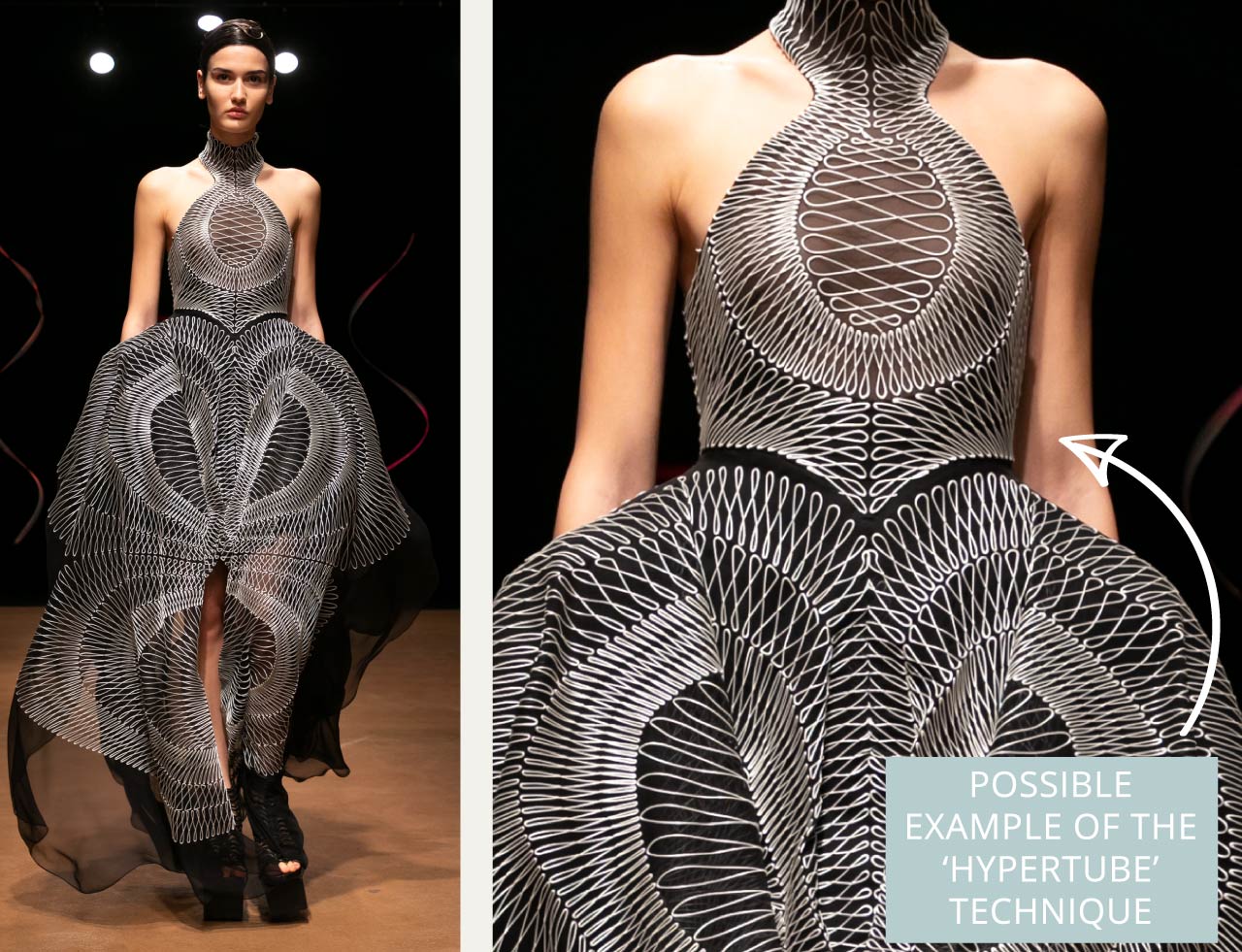 In tangible terms, this has resulted in a collection that builds on van Herpen’s previous design signatures. Fine linework forms the outline around organic shapes that are precisely cut and symmetrically arranged so that they build in scale away from the body. These fins are often arranged vertically so that they pulse and float as the body moves through air, mimicking translucent tentacles or spines moving underwater.

The press release details a series of techniques that are used to create her precise designs. Tellingly each technique is named in the way that some labels name styles.

The ‘Labrynthine’ technique builds on Cajal’s anatomical drawings and is formed using 3D laser cut silk ‘dendrites’ which are heatbonded to black transparent glass organza before being hand-embroidered onto lasercut pearlescent exoskeletons.

The ‘Hypertube’ technique is created by 3D printing a single-lined web of white silicone thread onto black silk chiffon. 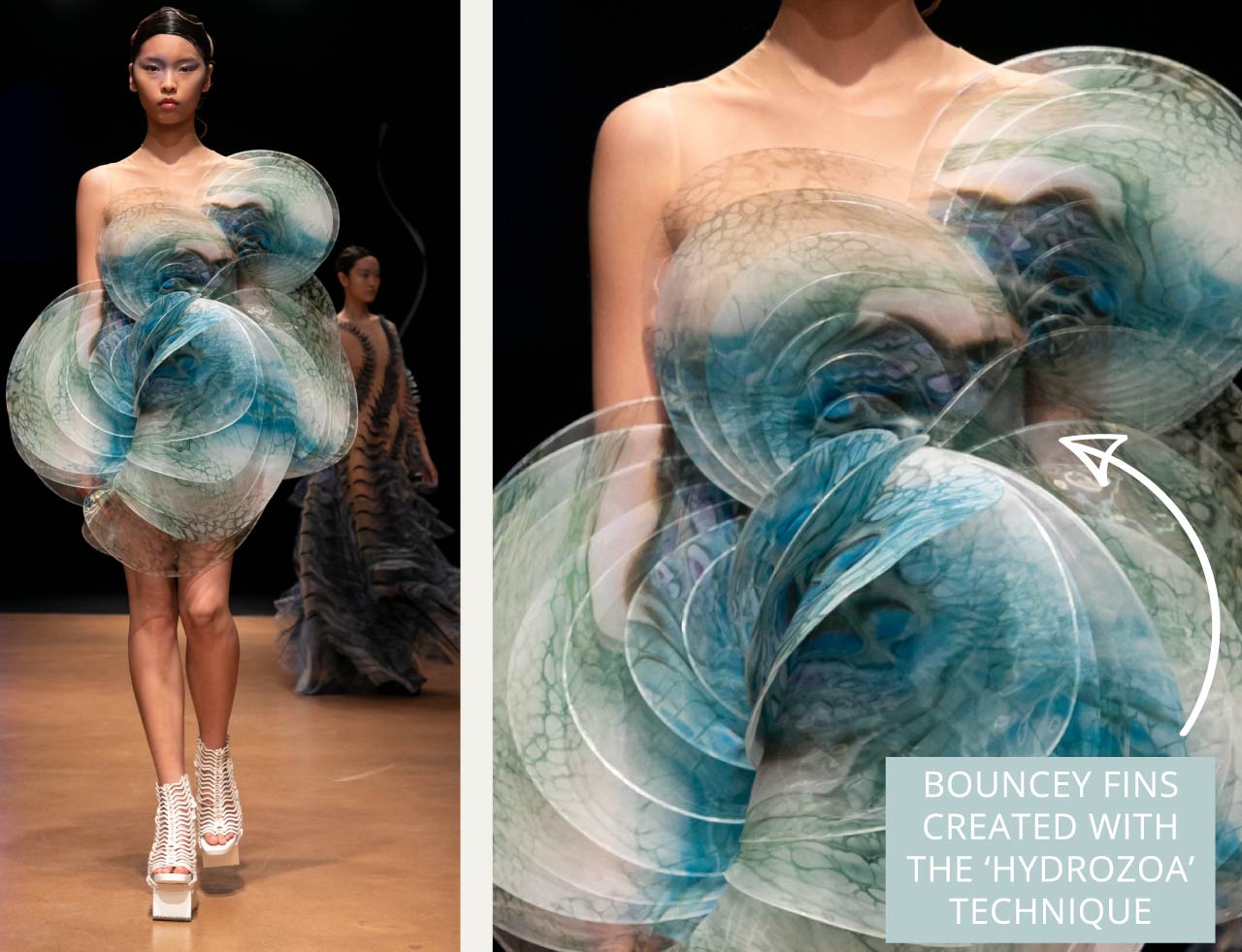 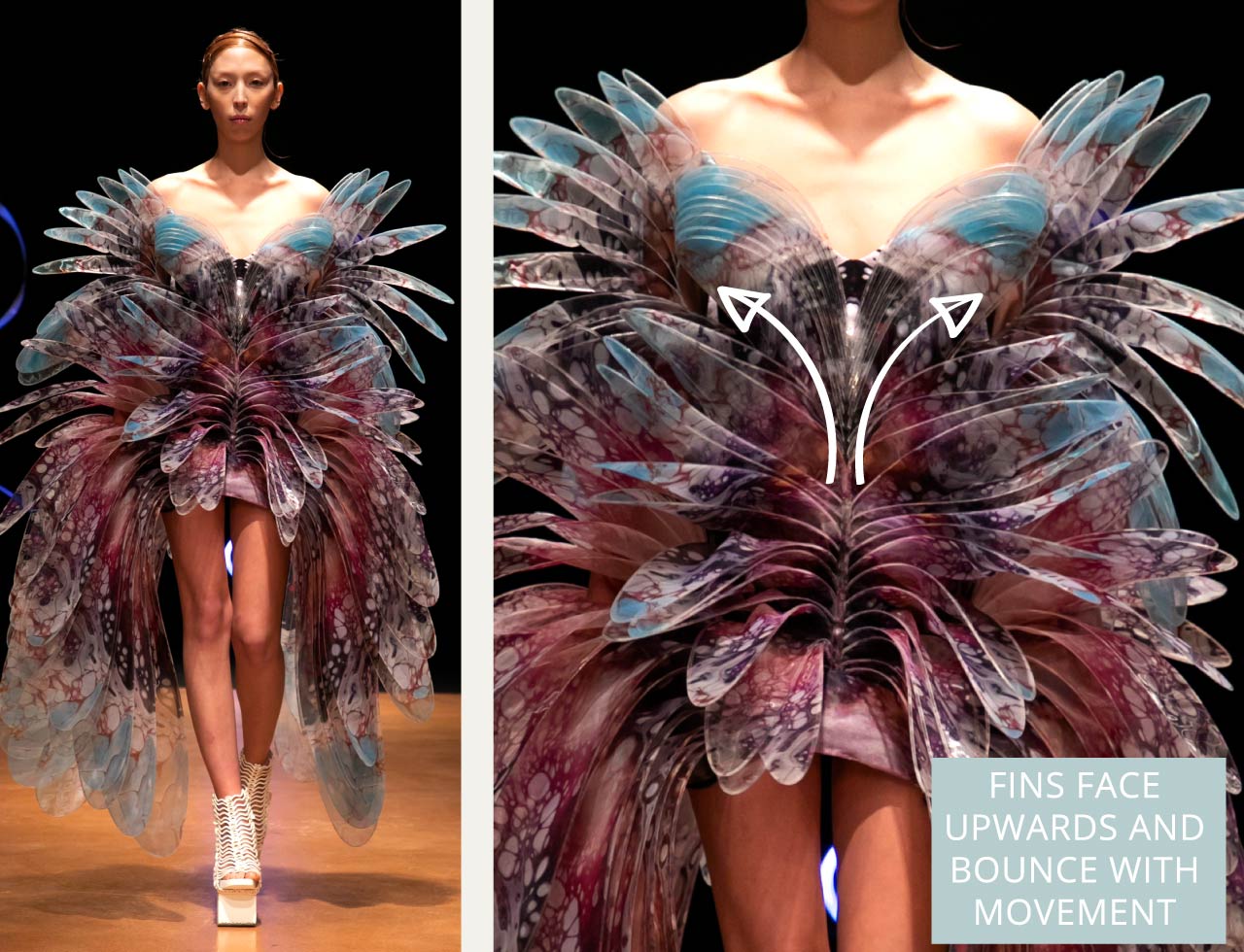 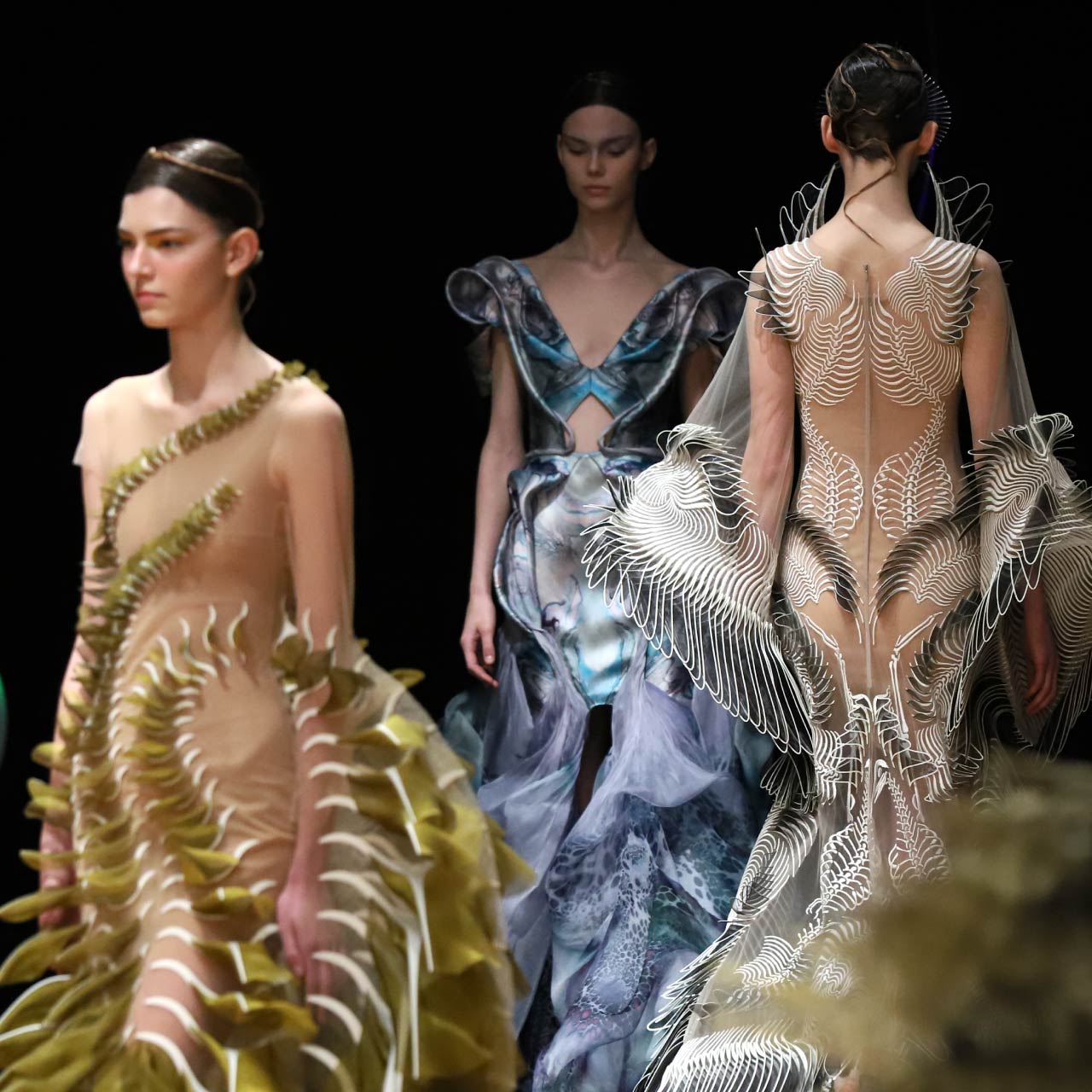 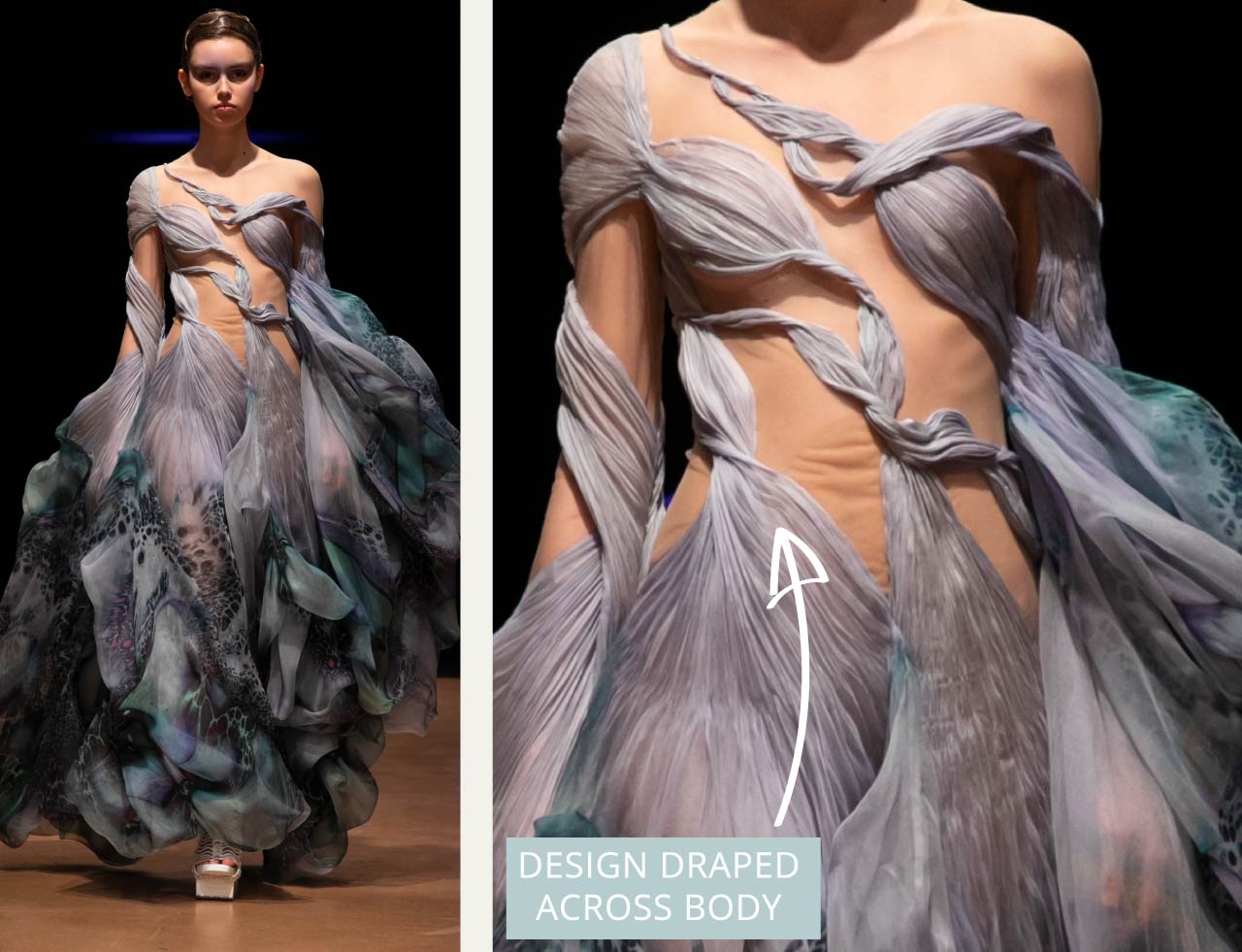 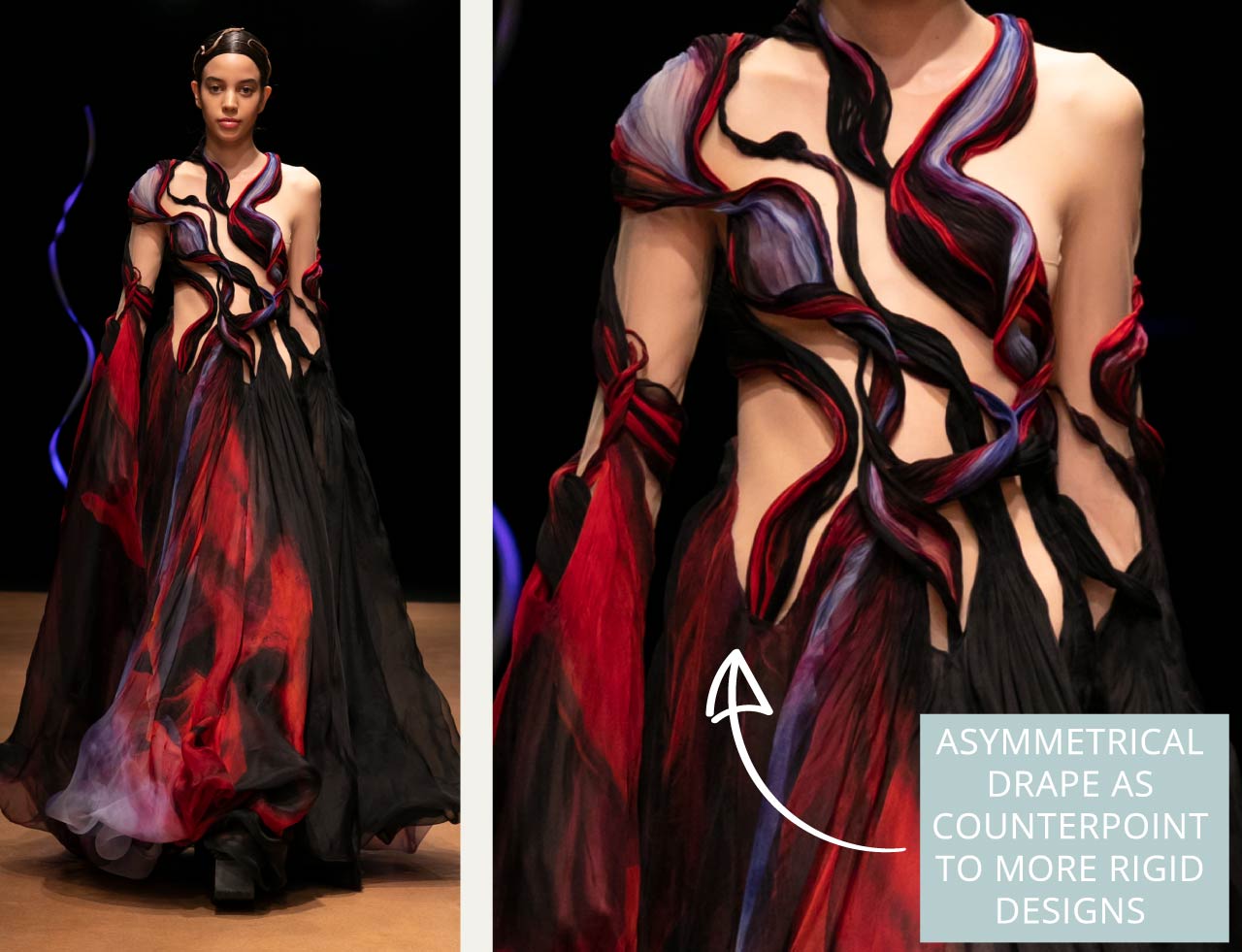 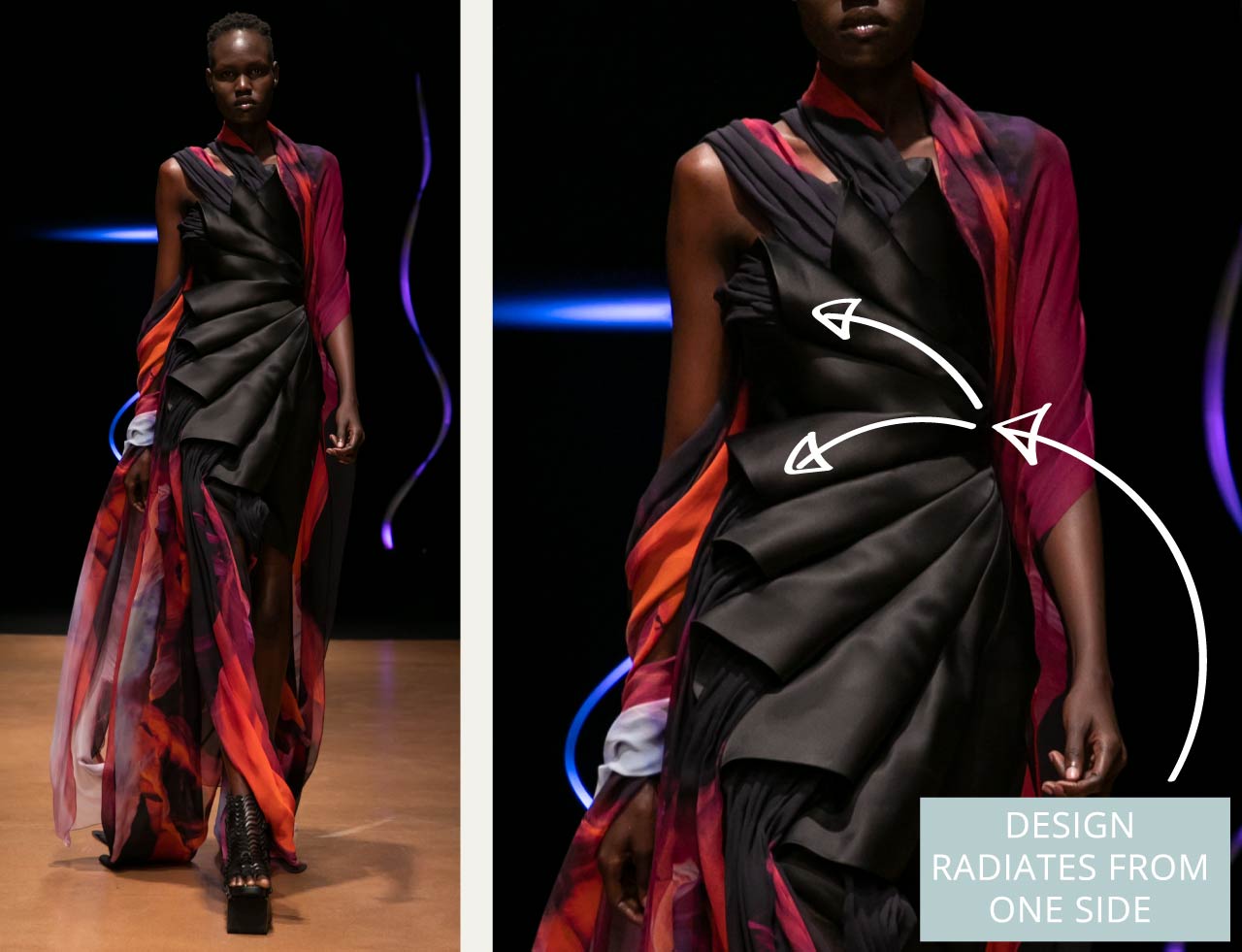 The ‘Hydrozoa’ technique uses glass organza in tones of dark purples and turquoise which have been created through oil-painting but have been digitally printed, heat-bonded and then hand-stitched onto hundreds of transparent lasercut PetG bubbles. While many a designer may have seen the bouncing fins of some of the garments and assumed that this was supported by the outline from a form of narrow boning, it appears that these fins may have been created using lasercut PetG». This same material also appears to be used as a filament for 3D printing» for its strong yet flexible properties.

While a process video is not yet available for this collection, you can get a sense of some of the atelier workflows and the way the fins are supported on past collections on the Iris van Herpen website in the process video for Shift Souls».

The ‘Morphogenesis’ technique is carved by thousands of white screen printing mesh layers, in collaboration with Philip Beesley». This involved the creation of 3D twisted vortex models using Rhino software which were numbered and sliced into 3mm widths and cut on a KERN lasercutter.

The press release mentions how a Grasshopper» script has been used to smooth the processes of lofting», slicing and nesting. While we often picture so much of haute couture as being a manual process, this tidbit provides an insight into how the precision in the designs has been achieved through the assistance of computer software. By using a script to smooth the curves between points and potentially arranging the pieces into the best configurations, this allows for a consistency into the work that would be simply too time-consuming by hand, or which would naturally introduce subtle inaccuracies if produced by the human eye.

So often in fashion, the push to hit a deadline does not allow a pattern maker or sewing machinist the time to step back and find a quicker, easier way to produce the same result. However, in Iris van Herpen’s designs, finding the right process must be a necessity. You simply cannot construct these dresses of hundreds of pieces, graduating in scale with solely manual processes alone – to create the designs, time must be taken to develop the systems that will guide how the patterns are created, labelled, cut out, stored for construction, and ultimately assembled.

There is scope for couture to act as the laboratory and R&D department of fashion, and for developments here to flow through into the wider fashion industry. Time spent on developing computer workflows to deal with complex patterns and cutting layouts could impact on efficient use of fabric and more sparing use of resources. The push for the technology to create a more circular fashion system in itself could come out of the petri dish of couture.

From a pure innovation point of view, manufacturers sometimes do not think something is possible until they are asked by a designer or a house if they can do it and are challenged to try and make the impossible work. Existing at the pure fantasy end of the fashion spectrum, haute couture has the advantage of setting a very inspiring stage for designers and manufacturers to push the limits of what is technically possible. 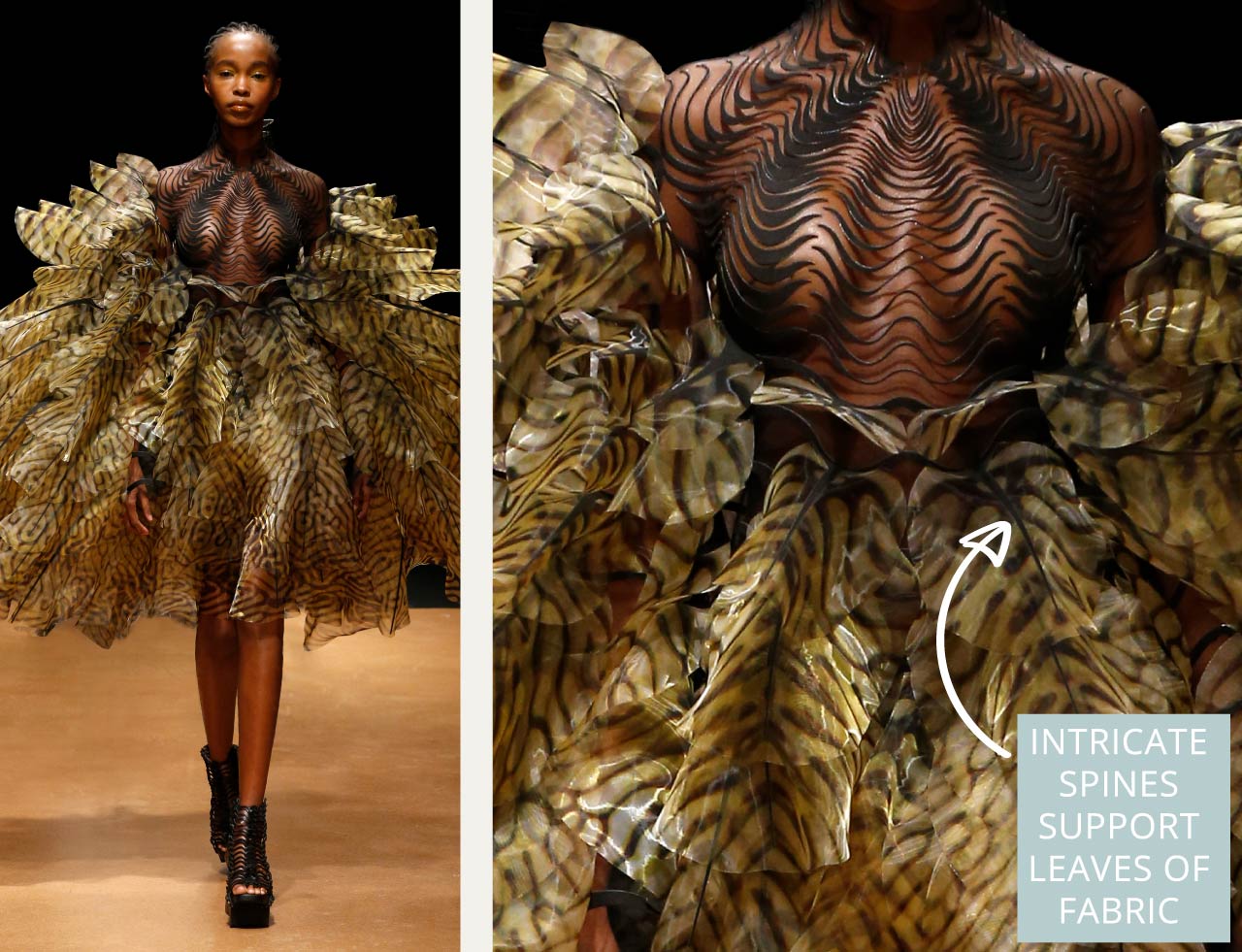 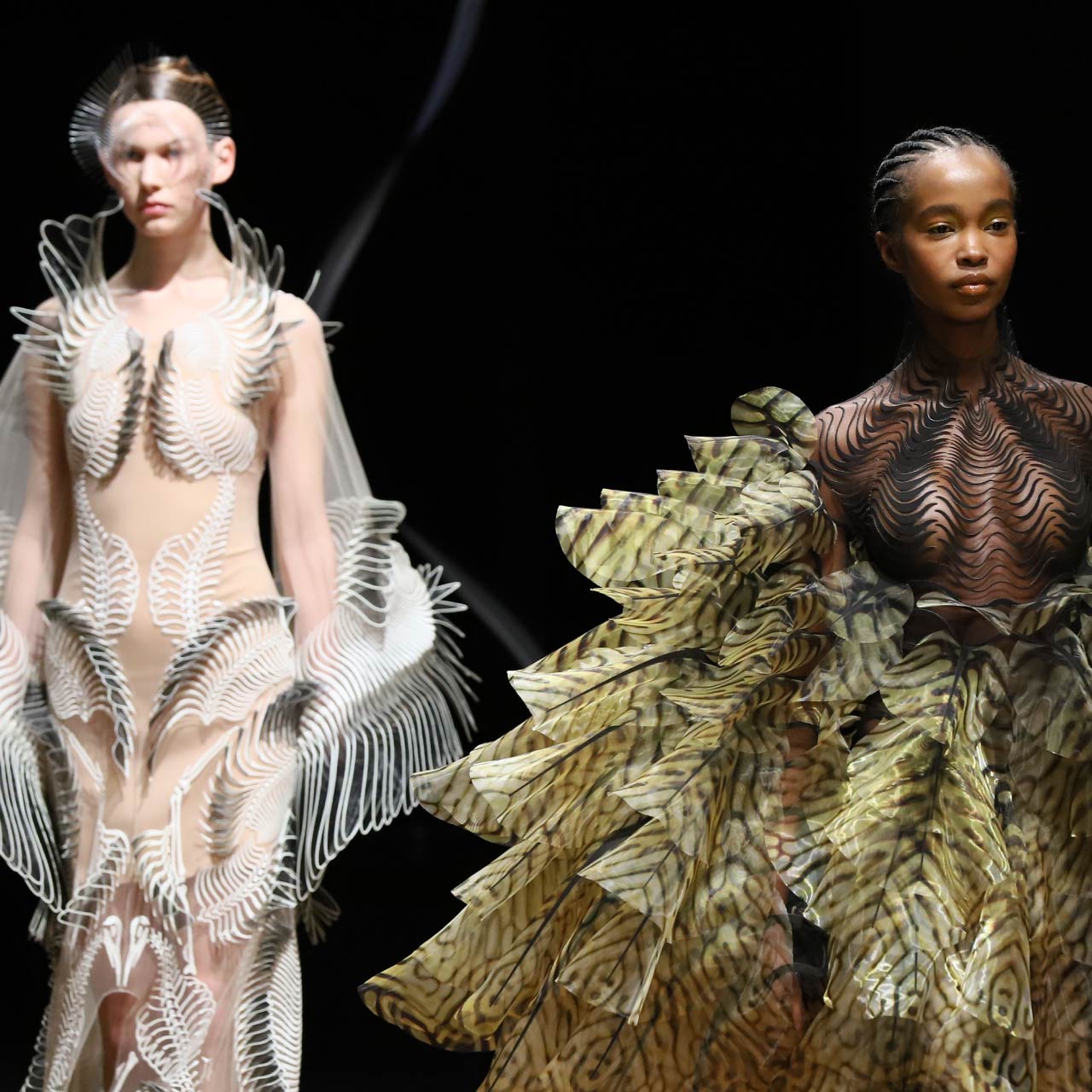 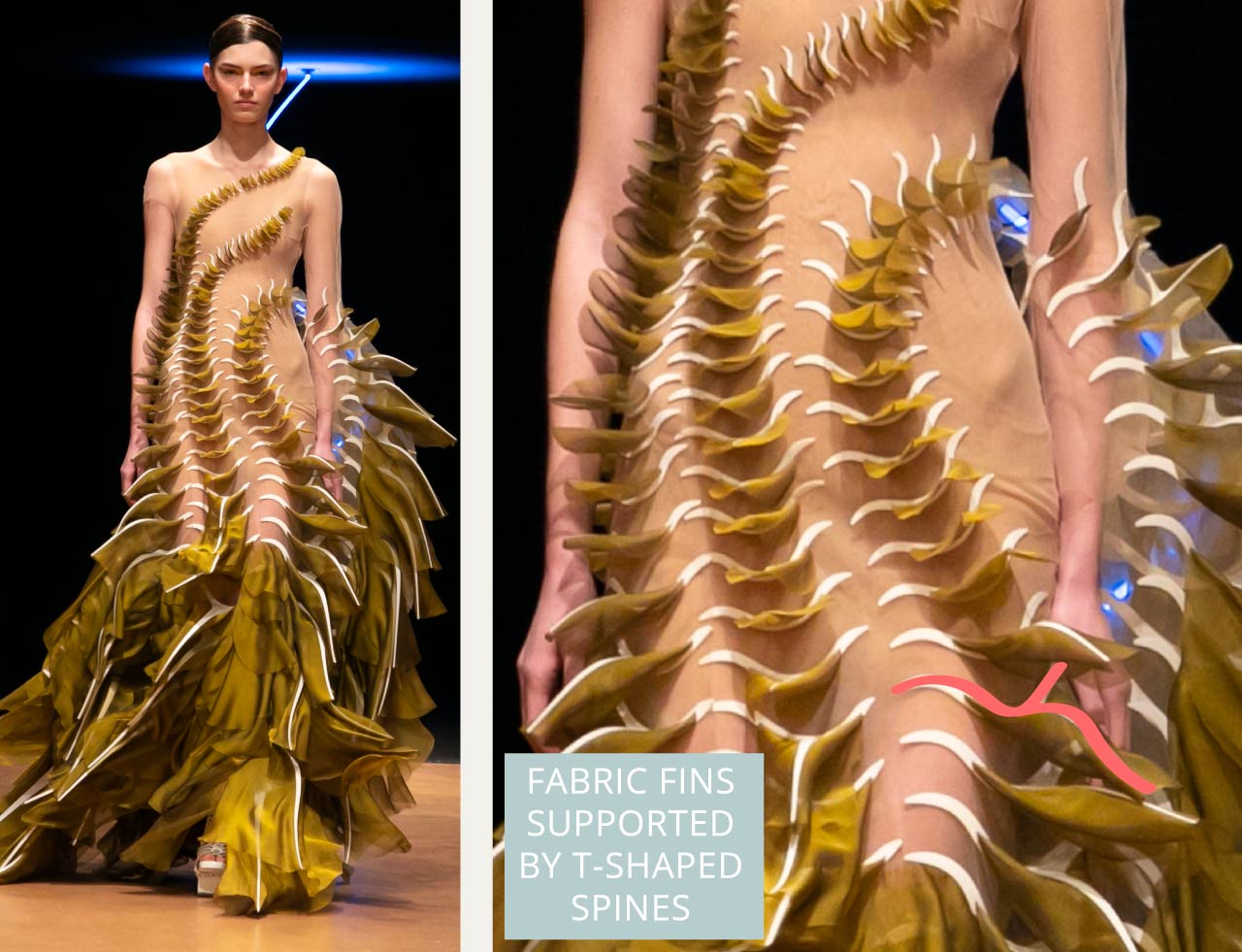 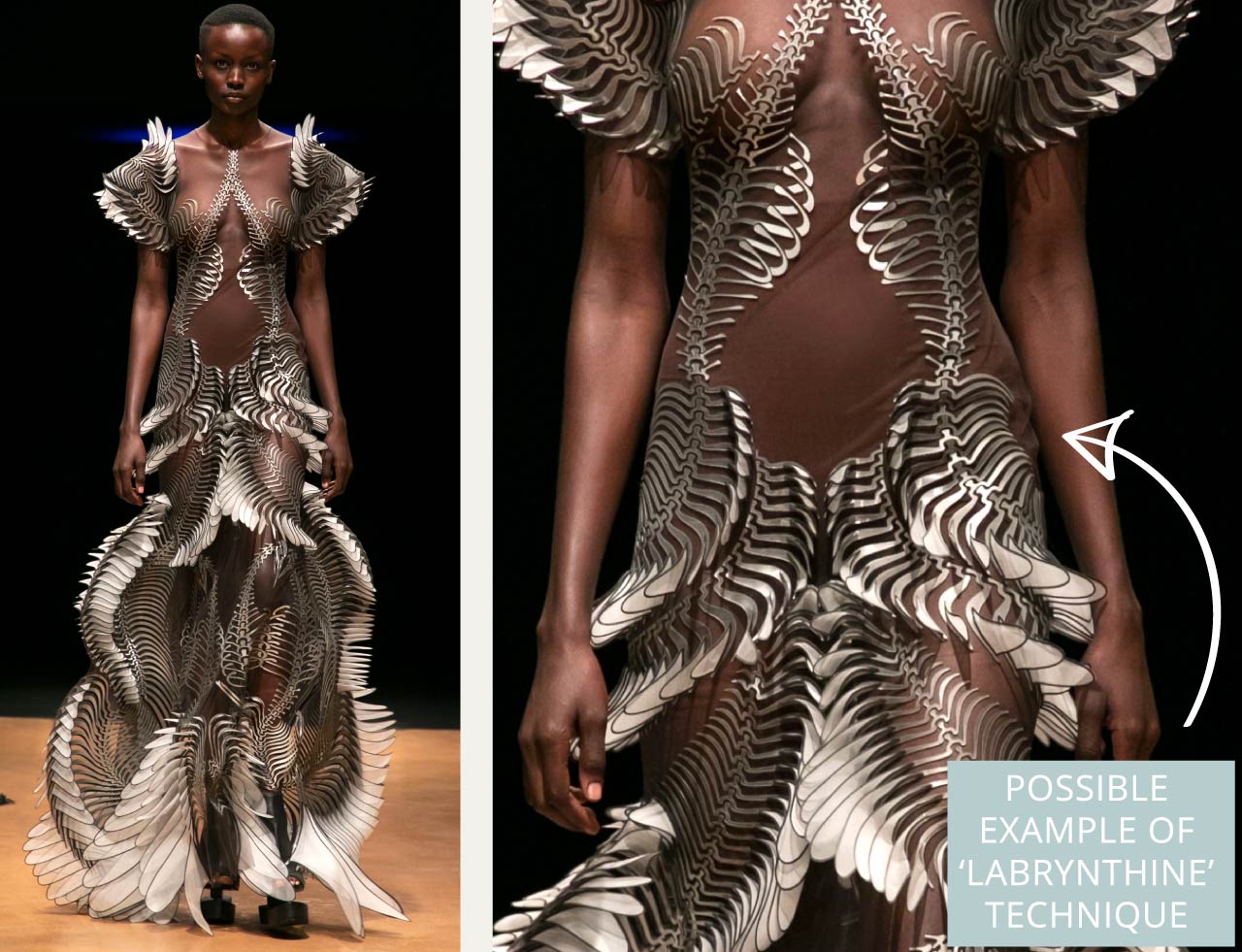 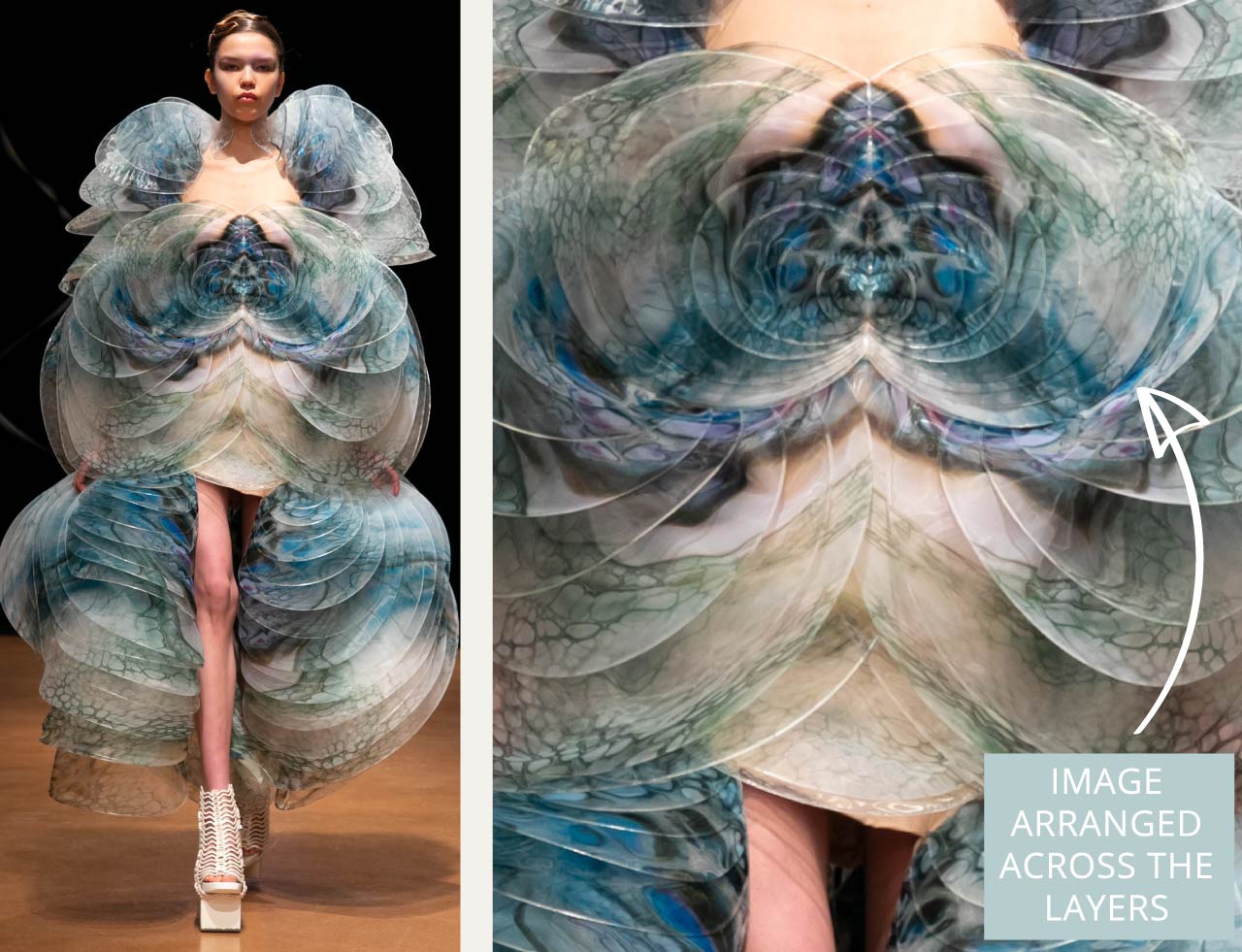 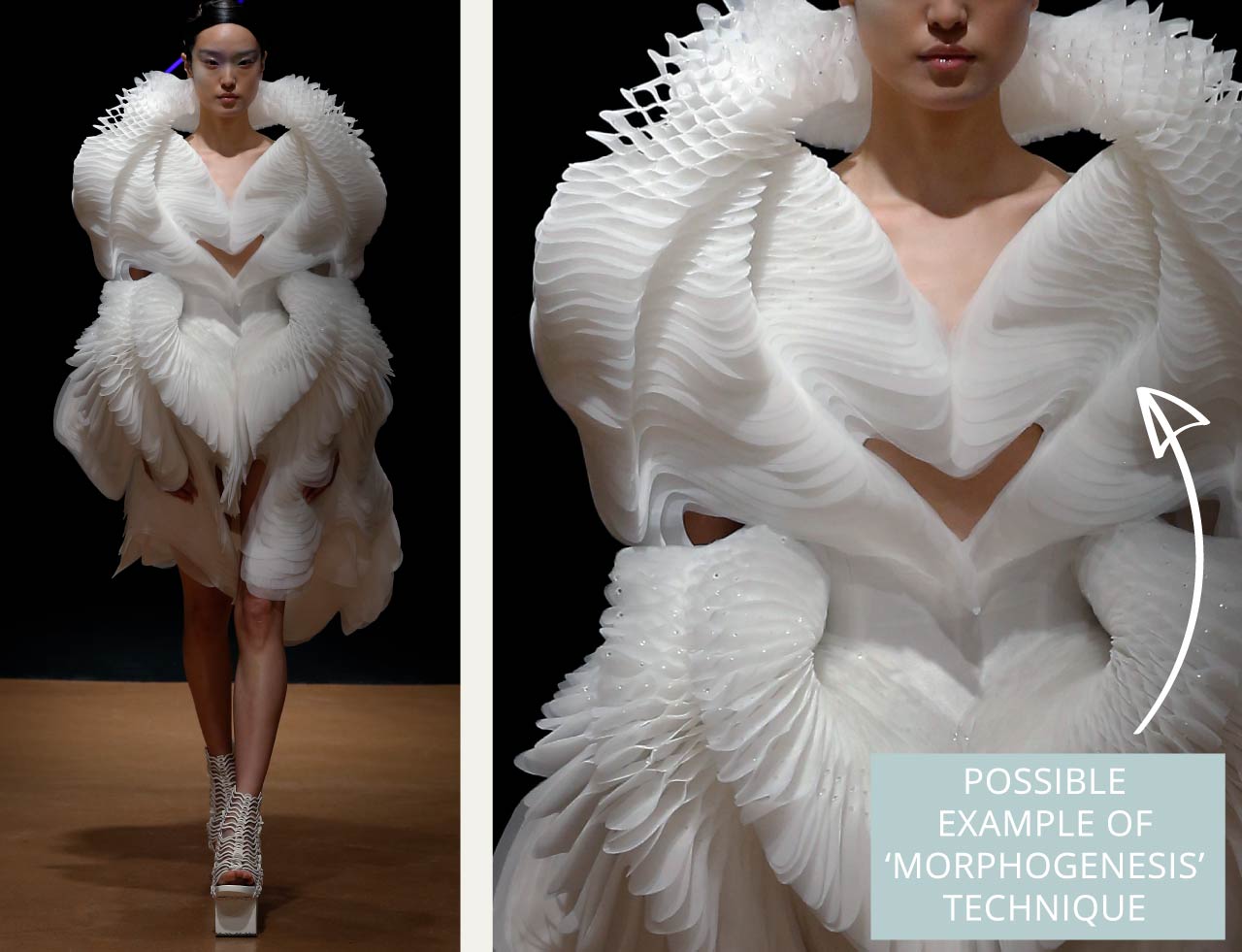 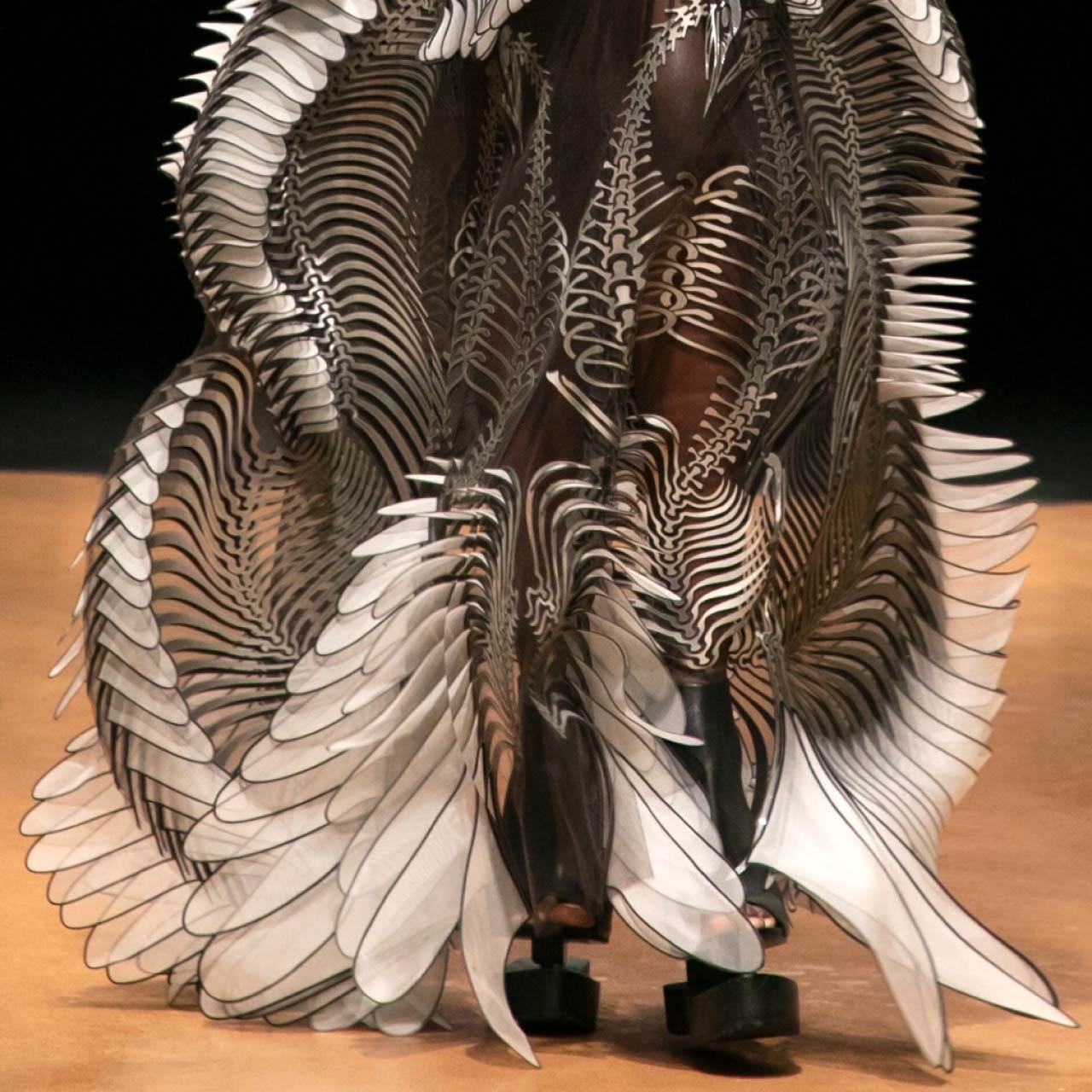 thanks for this fascinating article! just found this website and your observations are amazing to read. for a sewing enthusiast this is inspiring stuff. please don’t stop!