Drape: Working on the Stand at Lanvin

Drape: Working on the Stand at Lanvin 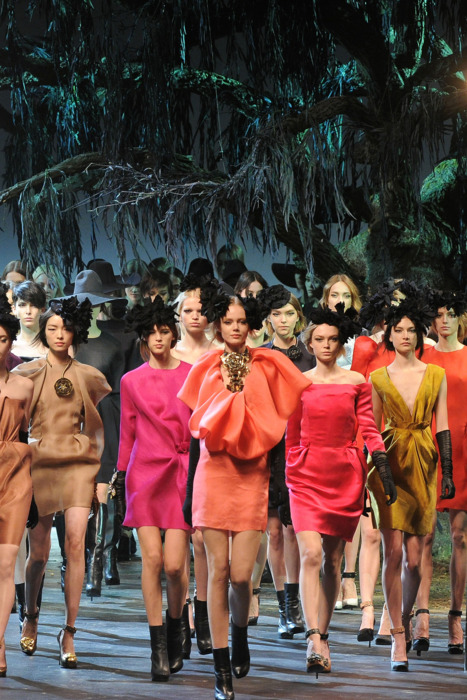 There are two main approaches that can be taken when converting a design into a 3D object for the first time. The approach that is chosen is very much decided by the design that needs to be achieved, and the particular working styles of the designer and/or the pattern maker.

The first approach is by flat pattern making, whereby a pattern maker will look at the designers sketch and will select a basic pattern block from which to build the design, making alterations to a basic jacket pattern for instance and adding fullness, moving seamlines, changing necklines etc. until the pattern resembles the design. Then this pattern can be made up in a test fabric and a first fitting can be done on a dress makers dummy or mannequin or on what is known as a fit model – a live model with the exact body measurements of the pattern. After this changes will be made, the pattern will be altered and a new toile recut until the designer and pattern maker are happy that the design is correct. This approach is predominantly based around flat pattern making, and is called “flat” because it is predominantly done to the 2D pattern on the pattern making table using existing patterns and measurements.

The second approach is very different and is much more about what the fabric wants to do, or what the fabric will allow you to do. This approach is known as “drape” or “working on the stand” whereby a designer or pattern maker will begin by draping basic fabric, such as calico, onto a mannequin or dress making dummy (such as those being hugged by Alber in the image above) and working much more like a sculptor the fabric is smoothed, creased, spliced and pinned until the desired shape is achieved. Once the garment is roughly the right shape, the fabric can then be marked with pen lines and notch marks and annotations of what piece is which, so that it can then be removed from the mannequin and flattened out without later confusion. It is from this drape that a first pattern can then be traced and the lines and measurements smoothed and checked, before a new first toile is sewn and ready for a fitting on a fit model. 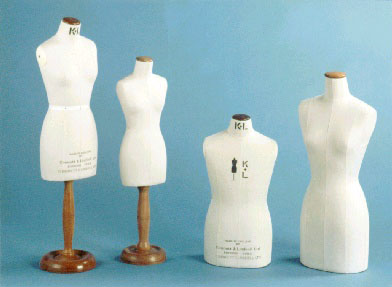 The two processes can both be used side by side, neither is more correct, and there are times when one will be more effective than the other depending on the design and personal preference. At their most basic levels of distinction flat pattern making will be quicker for designs which are closer to existing pattern blocks, for designs which are closer to the body or more graphic in nature or for those pattern makers who feel more comfortable working in this method. For designs which are more organic in nature, have more volume or more flowing use of fabric then drape is going to be an easier choice, especially for those who like to see and experiment with the design straight up as they go along, rather than committing to one pattern straight off.

There are also times when designers will work directly on the stand using real fabrics and to be able to apply embellishment or build up texture while the design is holding the shape of the human body. But in most cases the designer will want to be able to reproduce the design and will need to have a flat pattern for production at some stage of the process.

If you’ve ever tried to work on the stand then you will know that the fabric will start to tell you what it will and will not do. There is a certain sensitivity to working in this way, of allowing the fabric to fold just so, or be caught in such a way, and a designer whose work really utilises this feeling is Alber Elbaz in his work for Lanvin. 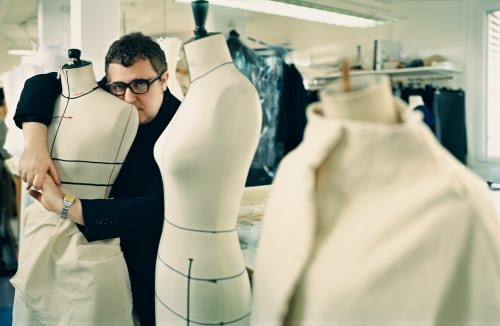 Of course, unless we could see into the Lanvin studio we will not know for sure how exactly these garments are created, but judging from the way that the fabric falls so beautifully and is caught so effortlessly I would be surprised if there was not a great deal of work done by drape in achieving such elegant results. If you look closely at the images below you will find it hard to spot seamlines – and there is a certain intentional respect for the fabric in this choice. Lanvin clearly uses amazing fabrics and it would be a shame for them to be dissected by unnecessary seamlines. There is something in drape as a process that is so fundamental to the success of Lanvin – after all a dress with laboured, fiddly panelling will never have quite the same effortless feel as a woman draped in a single piece of incredible fabric. 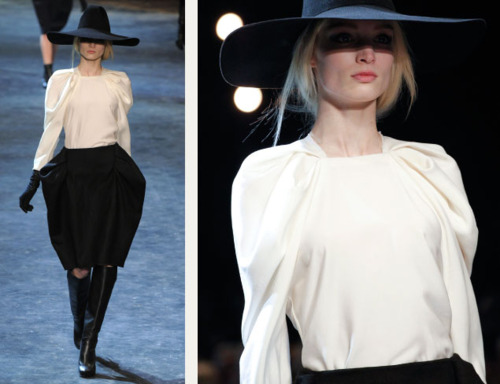 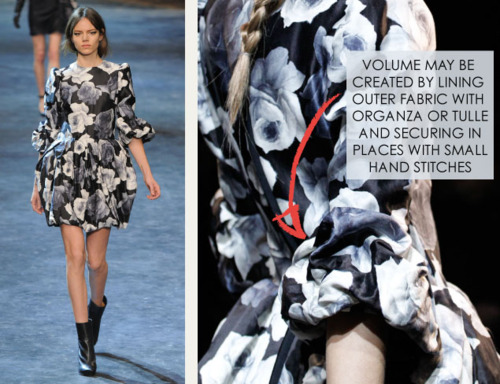 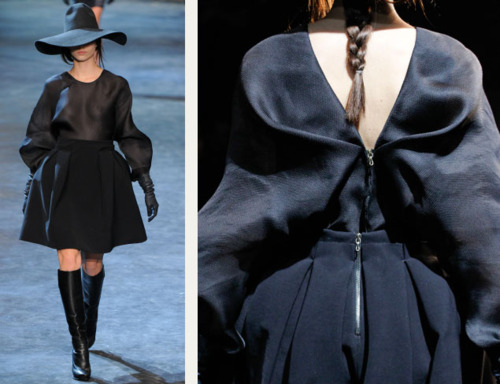 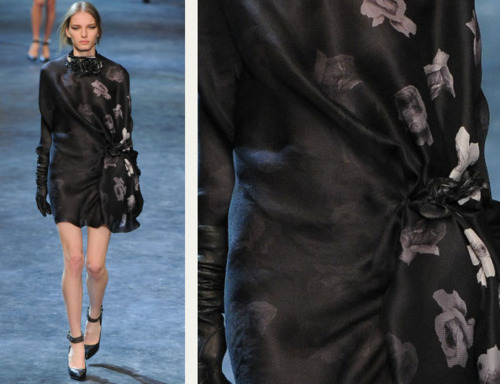 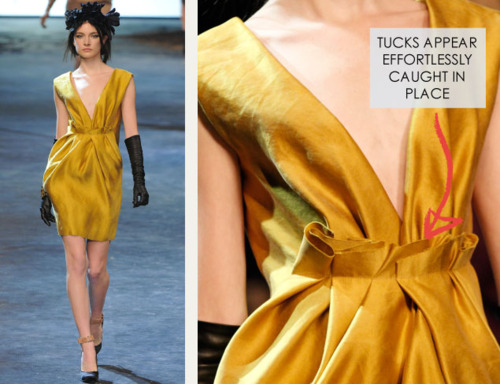 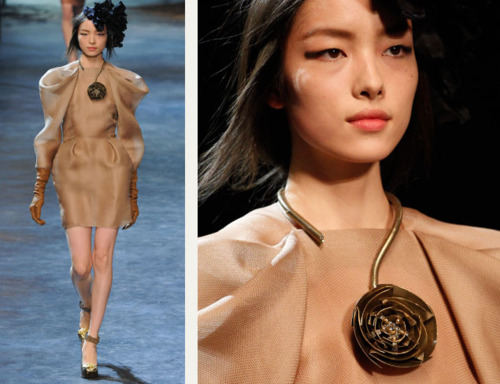 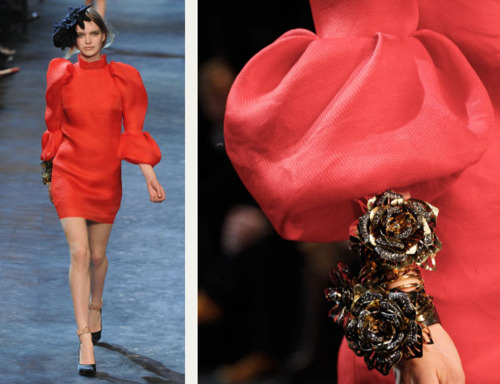 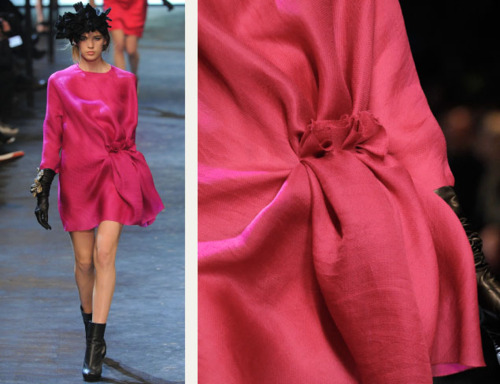