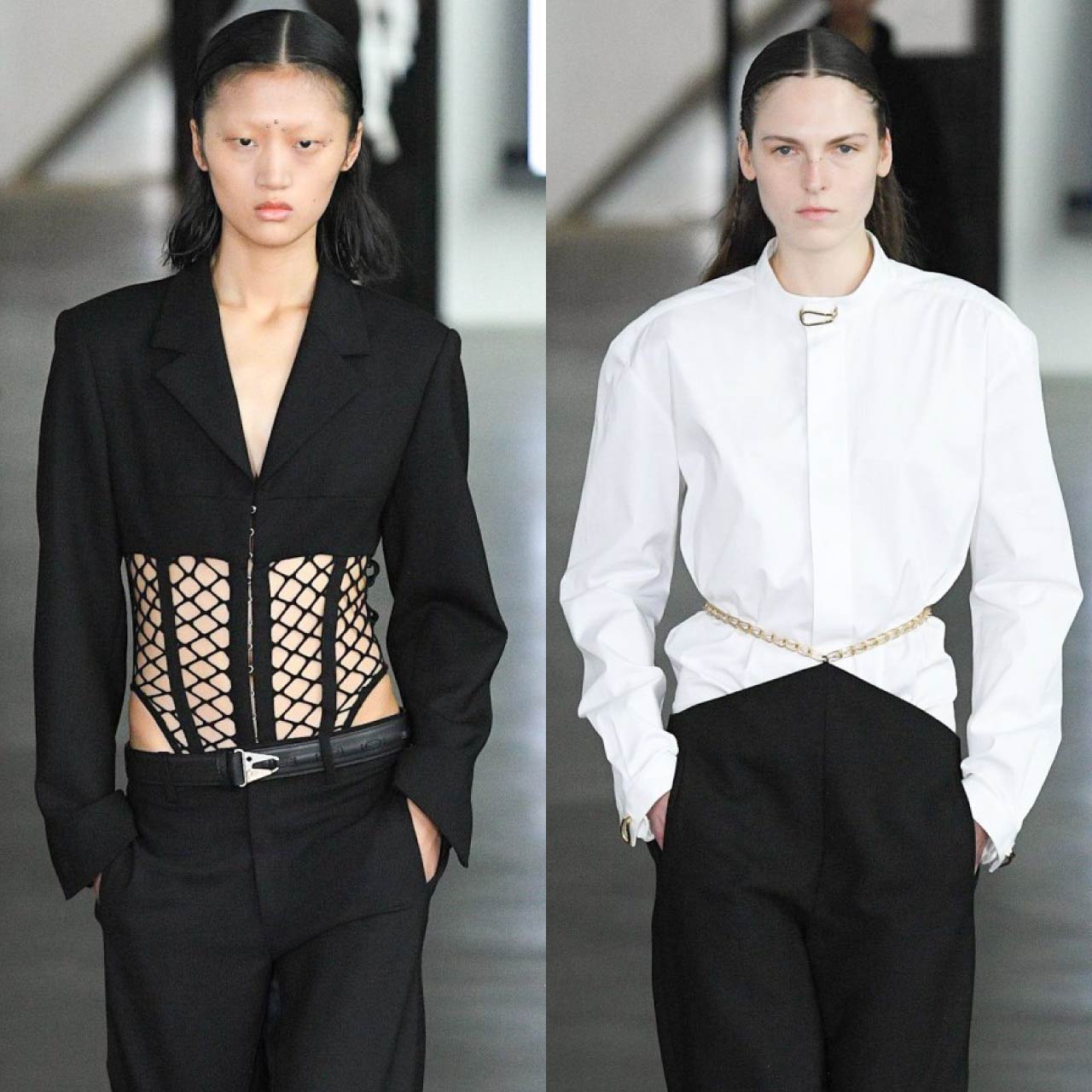 With fishnet inserts, cutouts, and corset-like closures the Dion Lee show for Autumn-Winter 2020 was peppered with references to lingerie. Custom-made jewellery and hardware also meant that chain elements were often integrated into the design of the pieces, at times challenging the typical anchor points of garments.

The hook and eye tapes inserted into the bagged out edges of some pieces, also allowed for corset-like closures to become the streamlined fastenings for tailoring. At times this tape was set along the edge of the tailored jacket, while on other pieces the fastenings were inset to create a more wrapped, double-breasted jacket fit. At times this tape also appeared in more unusual positions, such as along the knee slits of a pair of white trousers.

Hook and eye tapes are basically a two-piece tape, with a row of hooks on one piece and a row of loops on the other side. The fact the fastenings are sewn onto a tape ensures that they are evenly spaced down the seam. These types of tapes come in different sizes and weights of hardware depending on their use.

Underwear and lingerie references also appeared through use of double-layer waistbands, as though the garments were worn oversized and dropped to reveal the underwear underneath. This idea was played out in a variety of ways, sometimes with buckled straps at the sides leading into thong-shaped design lines at the back, sometimes with the waist dropping to reveal a more Y-front style shape. The closure for this was often resolved with an exposed zipper running right through the centre front of both layers. On some of the cleaner pieces that used streamlined cutouts on the hips, the trouser fronts were noticeably minimal with no fly front design used.

Where the waistbands were dropped, this sometimes revealed fishnet inserts, and fishnet was also used on a hybrid bodysuit with tailored jacket elements around the top half, and boning flowing from the rib cage down. 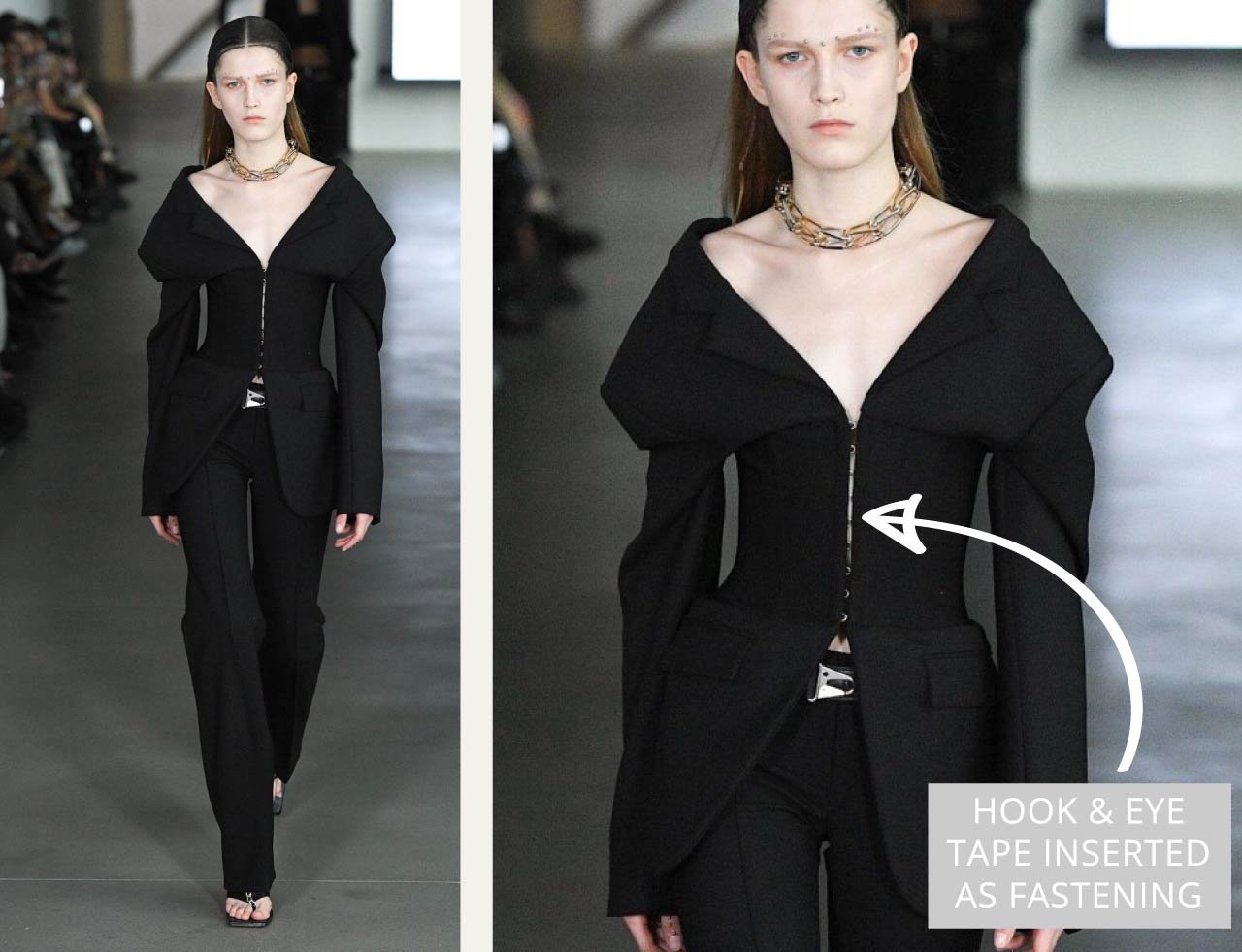 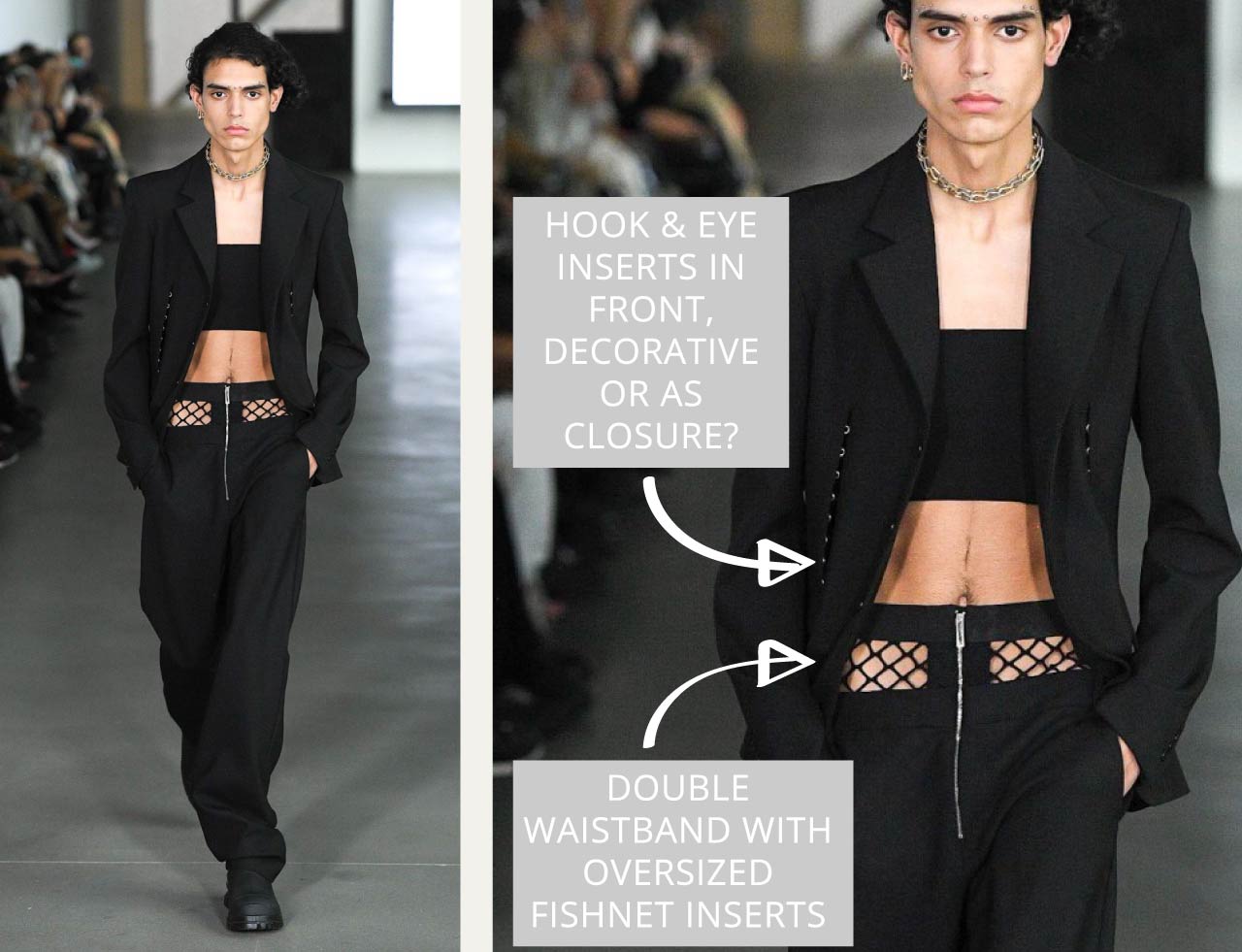 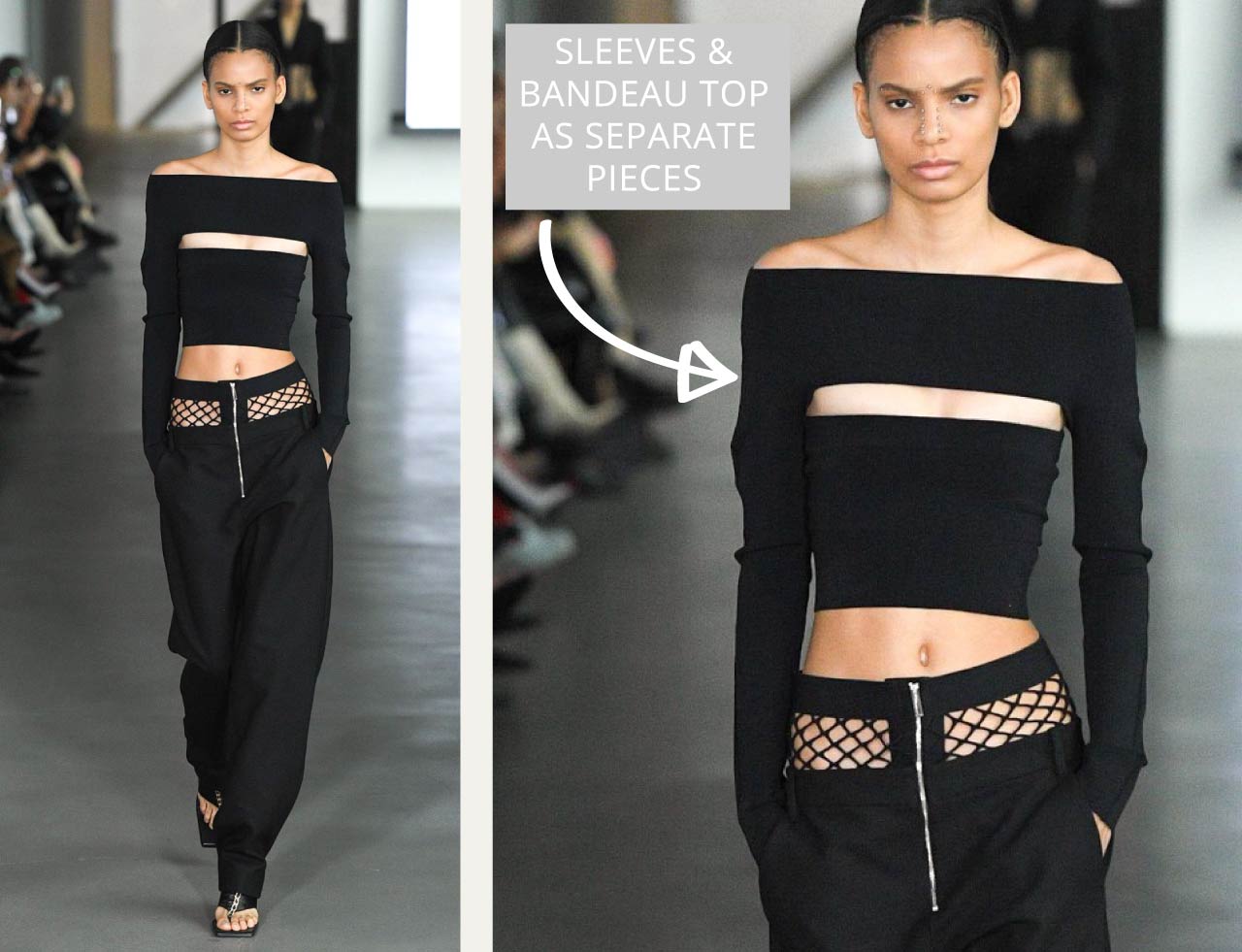 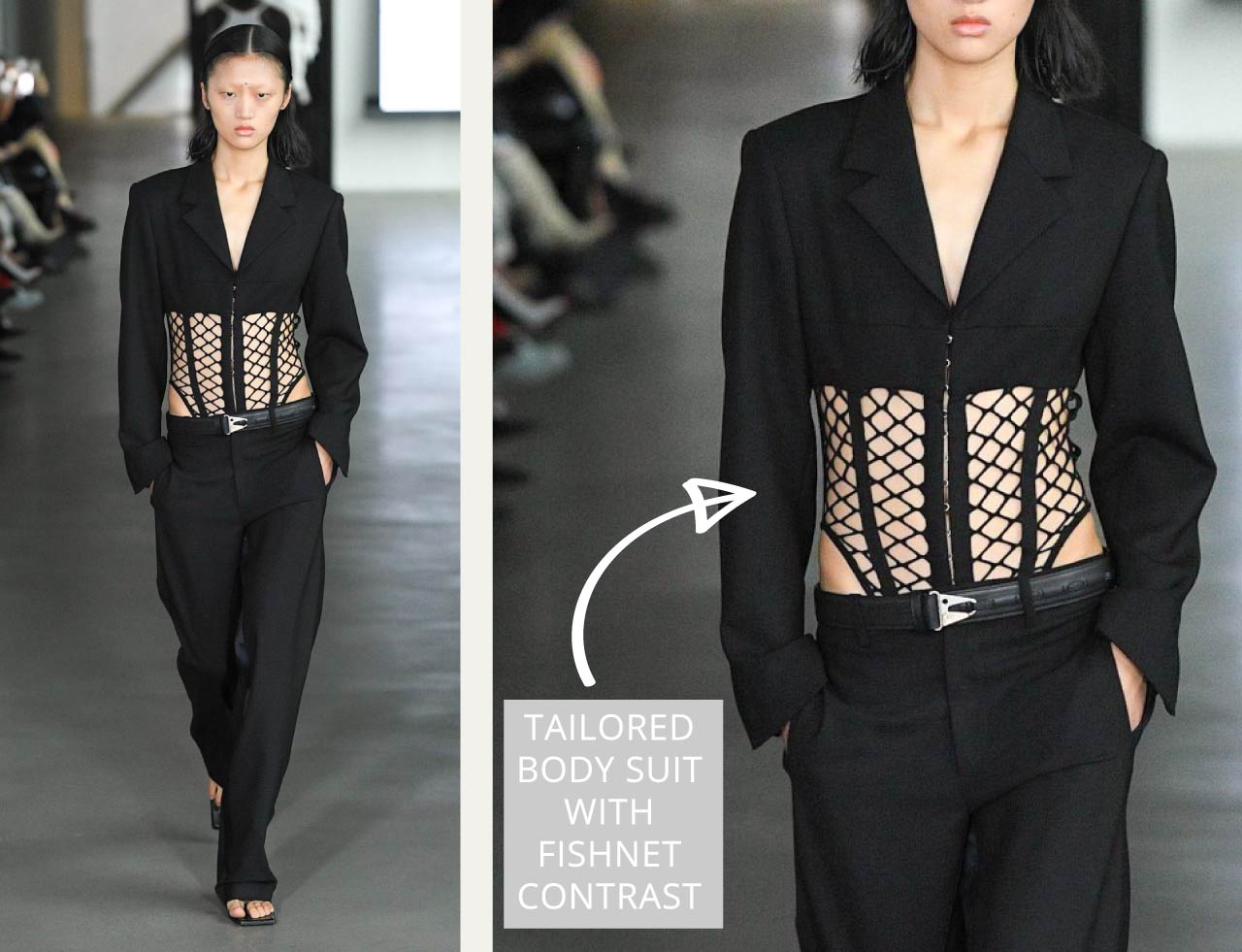 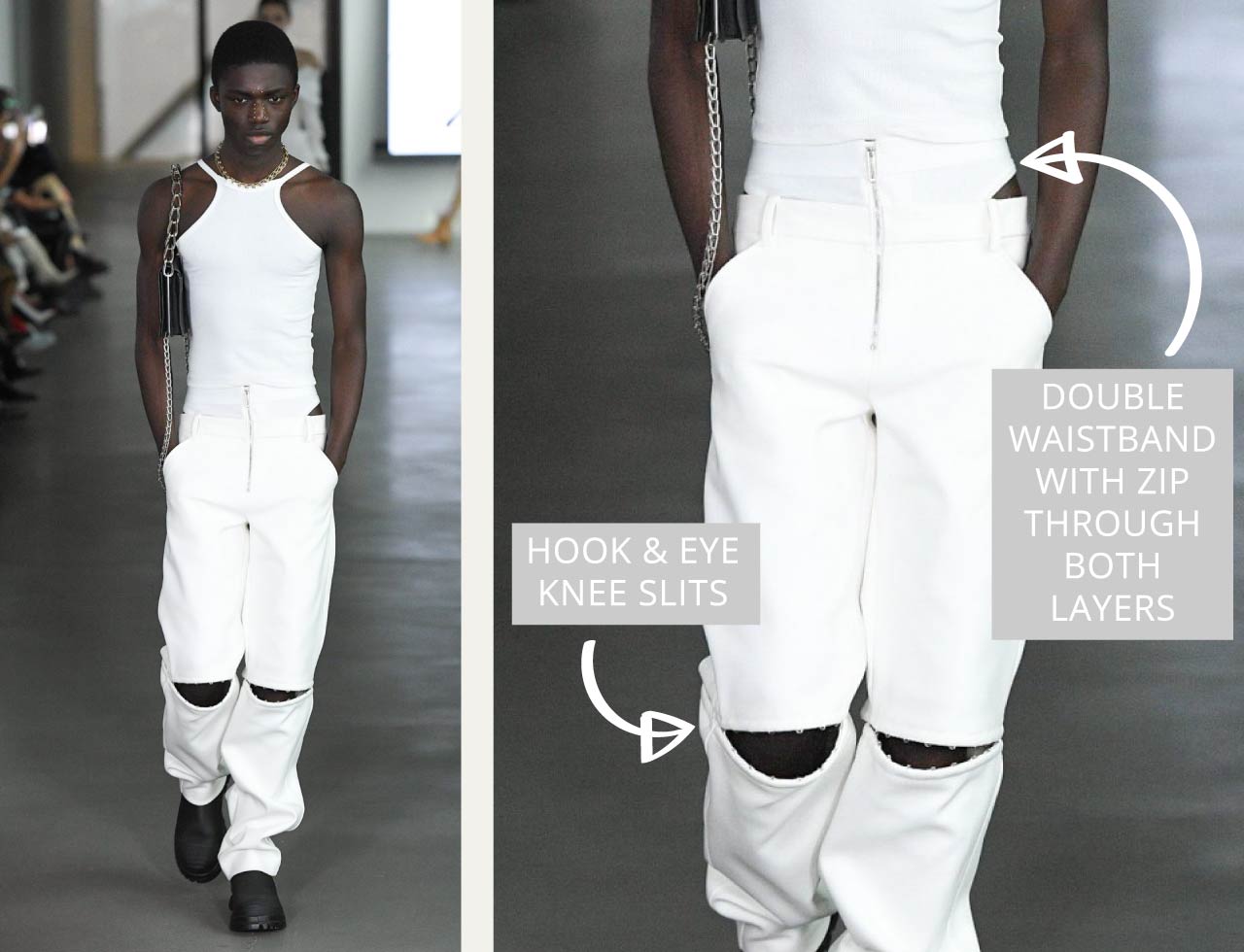 Chain was often used so that it was carefully spaced with the fabric, to integrate pleats into the design. At times, this was done horizontally around the body on necklines and dropped-waist dresses. At times, the chain was hung vertically, and the fabric pleated in at the centre front to create a ruched effect.

Many of the designs use design lines that radiate outwards from the centre of the body, and especially from the pelvis. Whether it is the lines of tie-dyed fabric, the direction of the chain, or the position of gathered or pleated fabric that radiates outwards, you will notice that these radiating design lines repeatedly occurred across the collection. 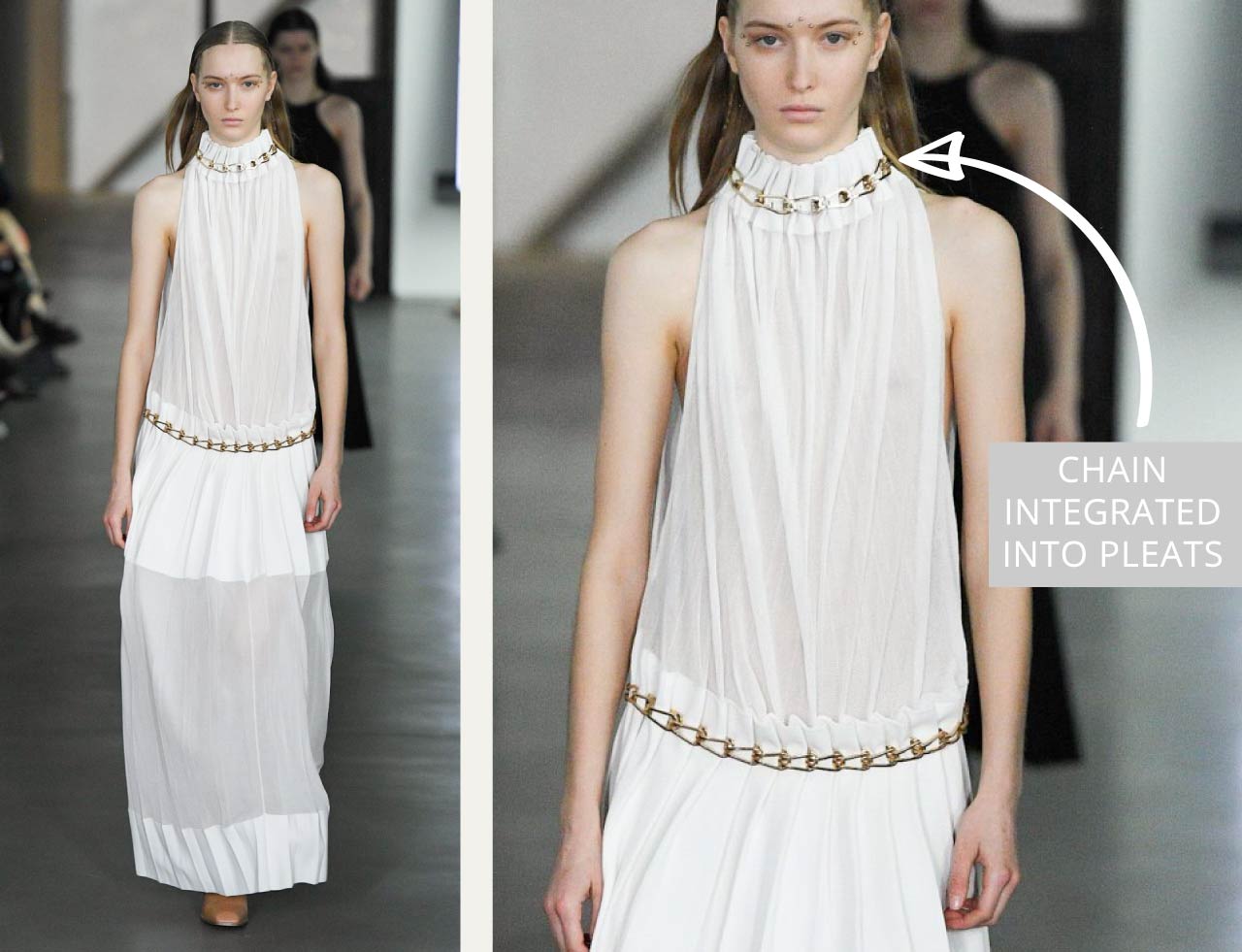 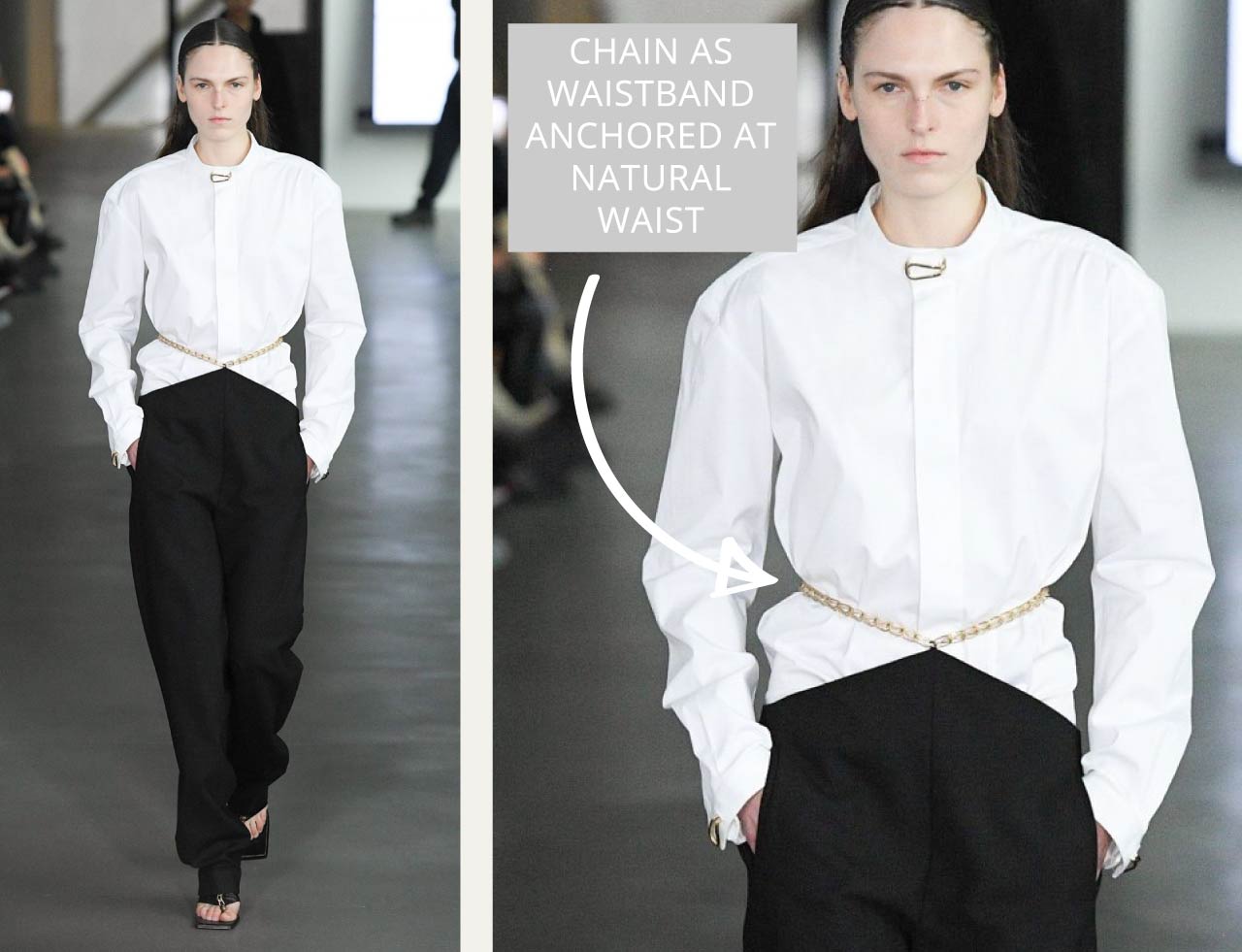 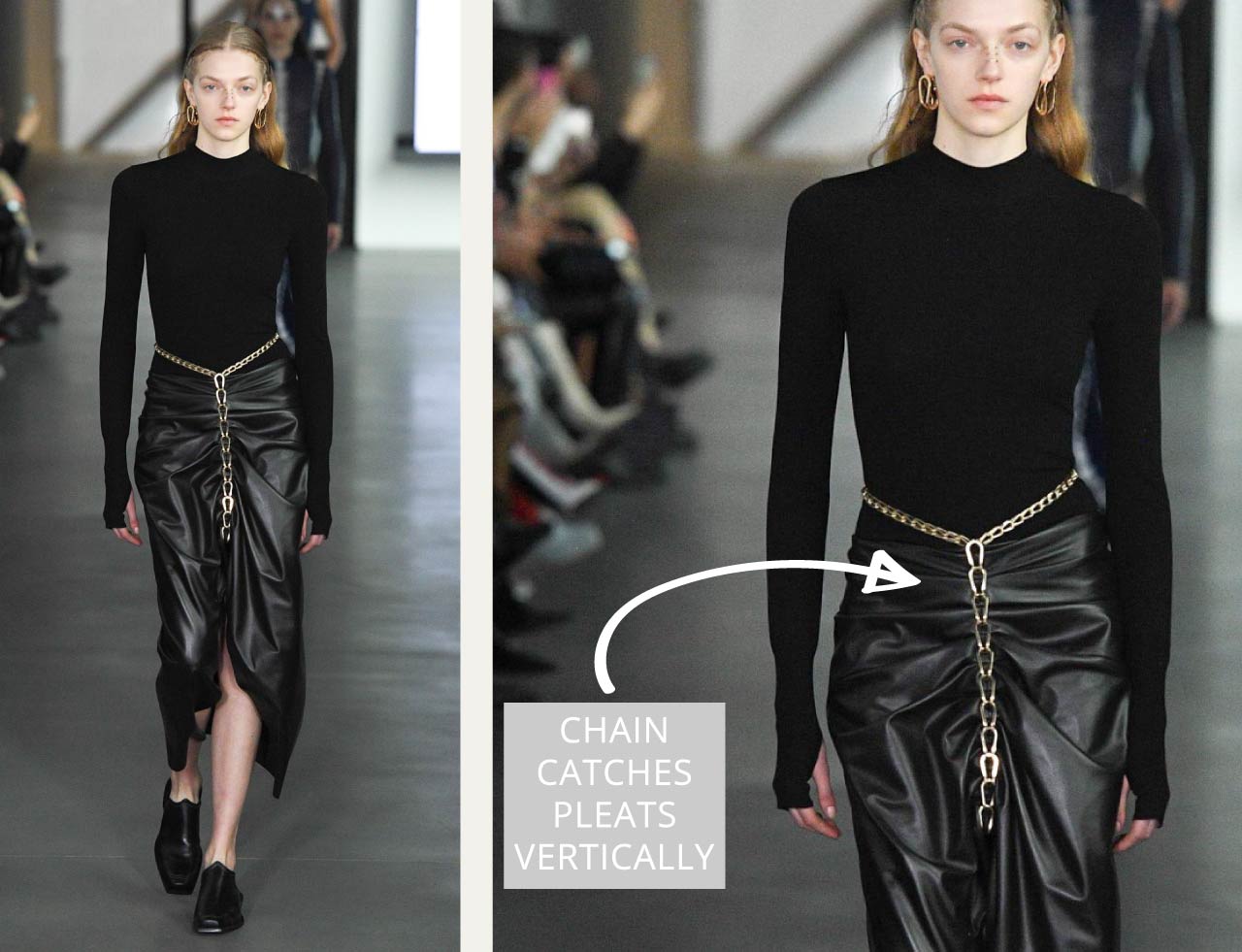 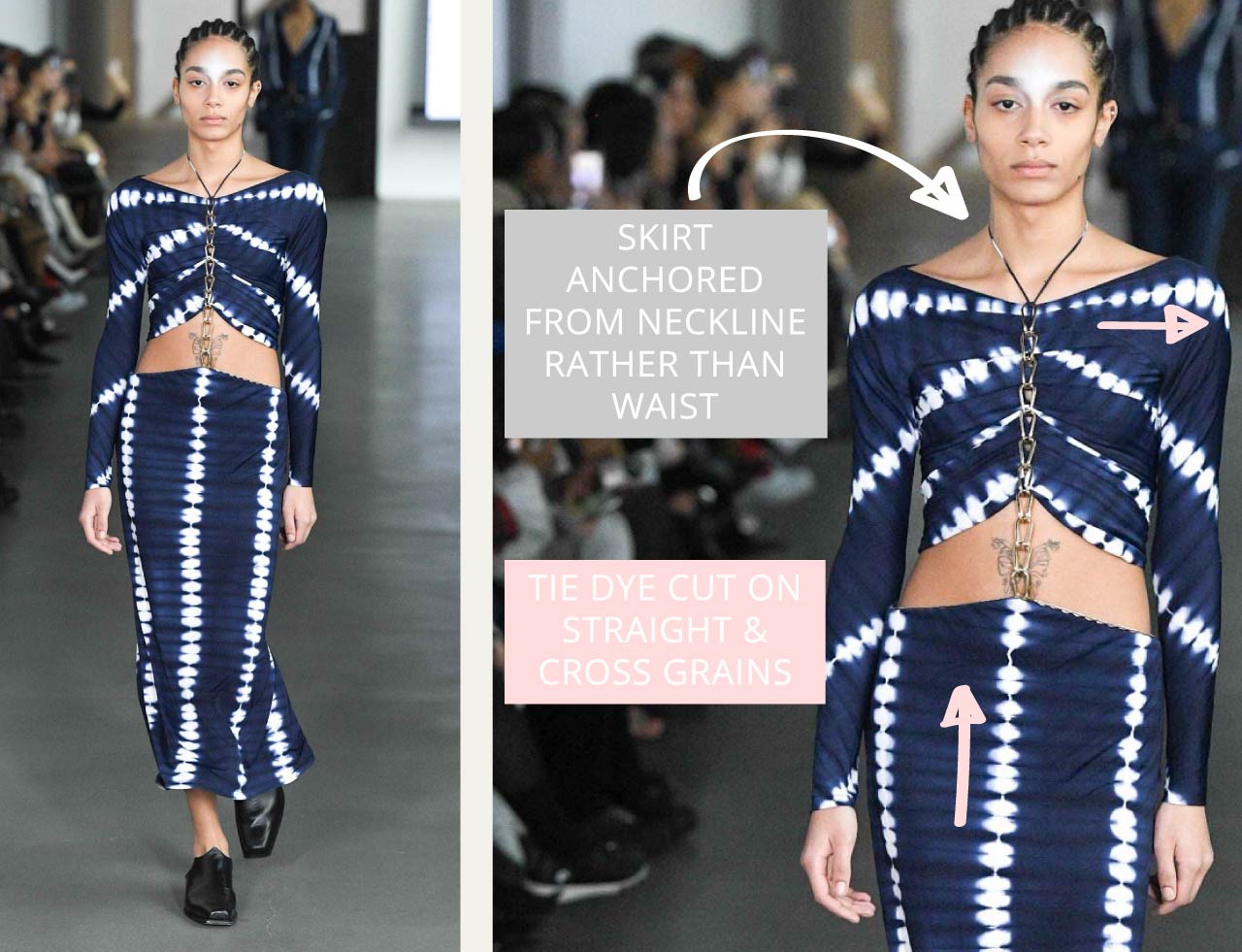 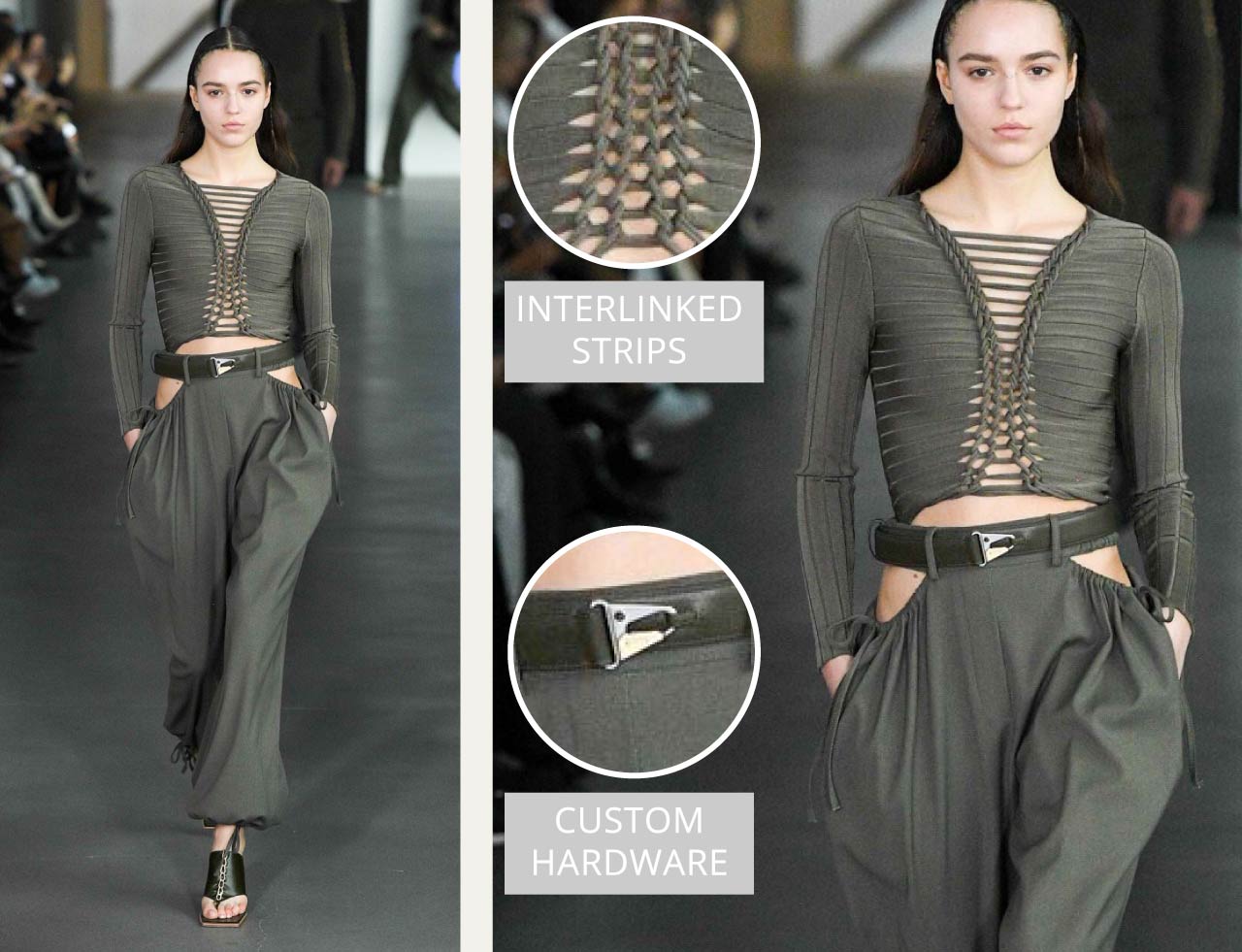 Another key idea which was played with across different garments was the use of chains, ties and even piercings to change the way that the garment is anchored to the body. For example, typically a pair of trousers or a skirt is anchored to the waist, while a dress may hang from the neckline. In this collection, chain waistbands were sometimes used around the natural waistline, but positions to allow the actual waistline of the trousers to drop lower around the hips. Some skirts were designed with ties that stretched upwards past bandeau tops so that they were linked to the necklines or shoulders of the wearer, bypassing the waist entirely.

In the final look of the collection, a (thankfully) lightweight looking skirt hung from the belly button piercing of a model, doing away with typical waistbands entirely. 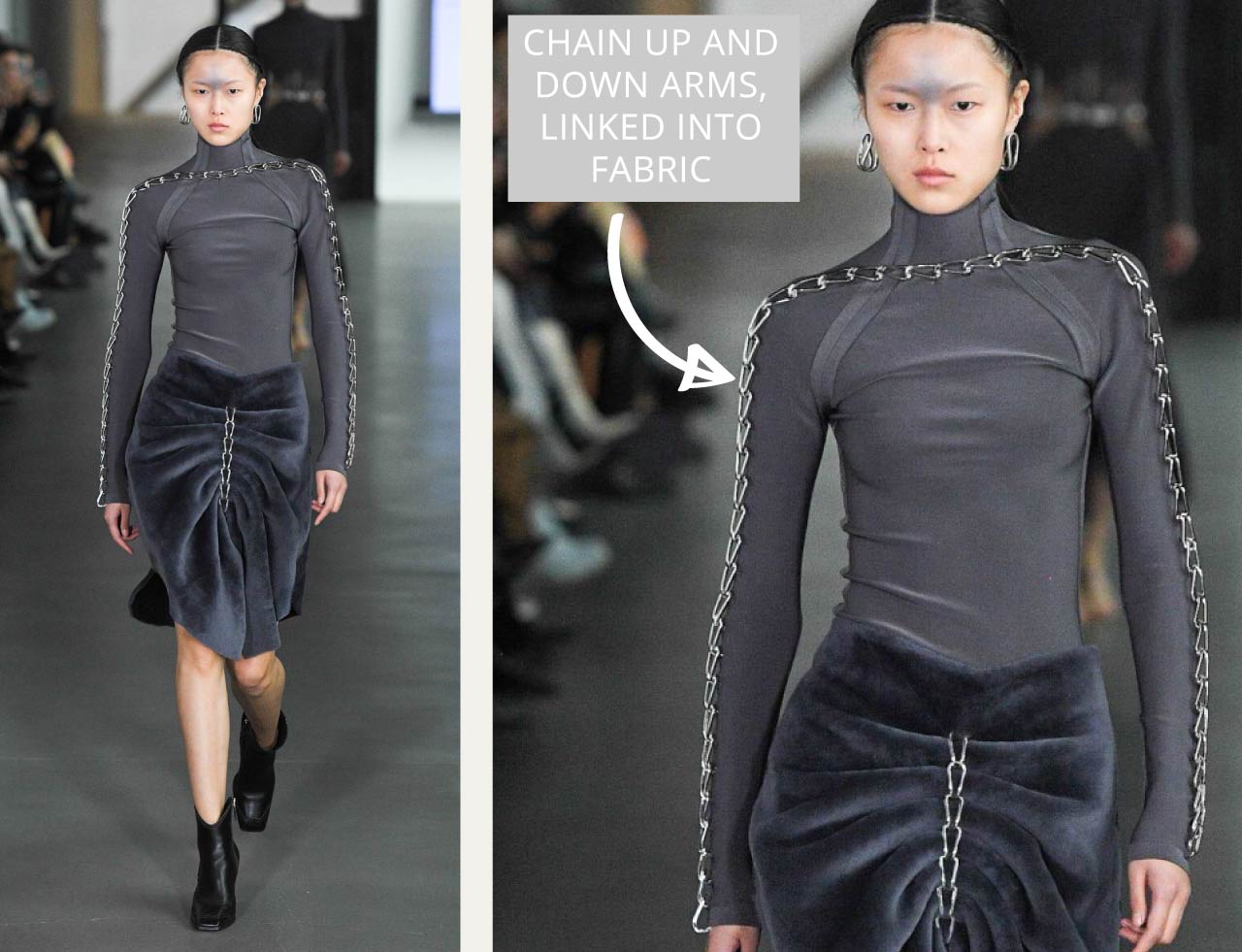 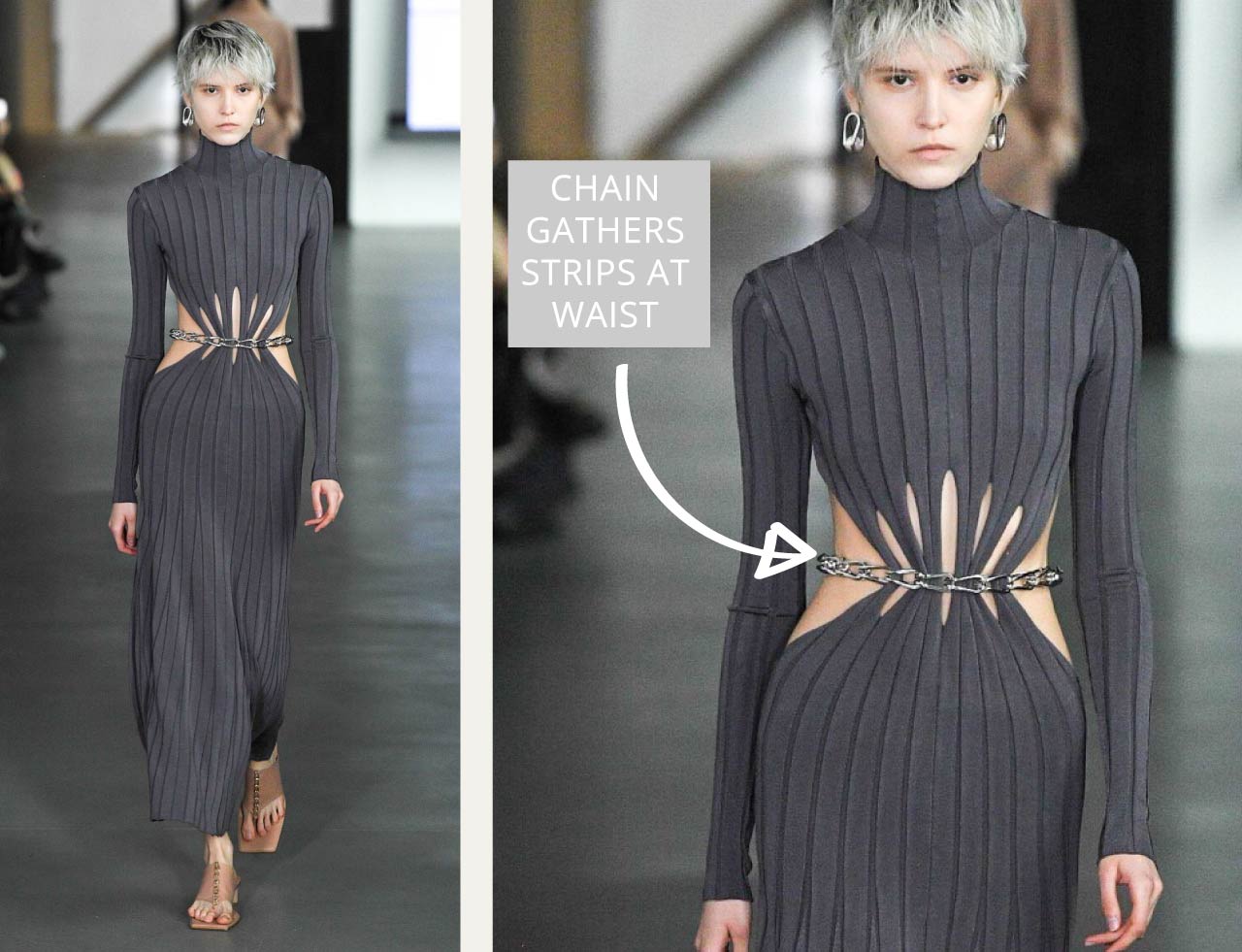 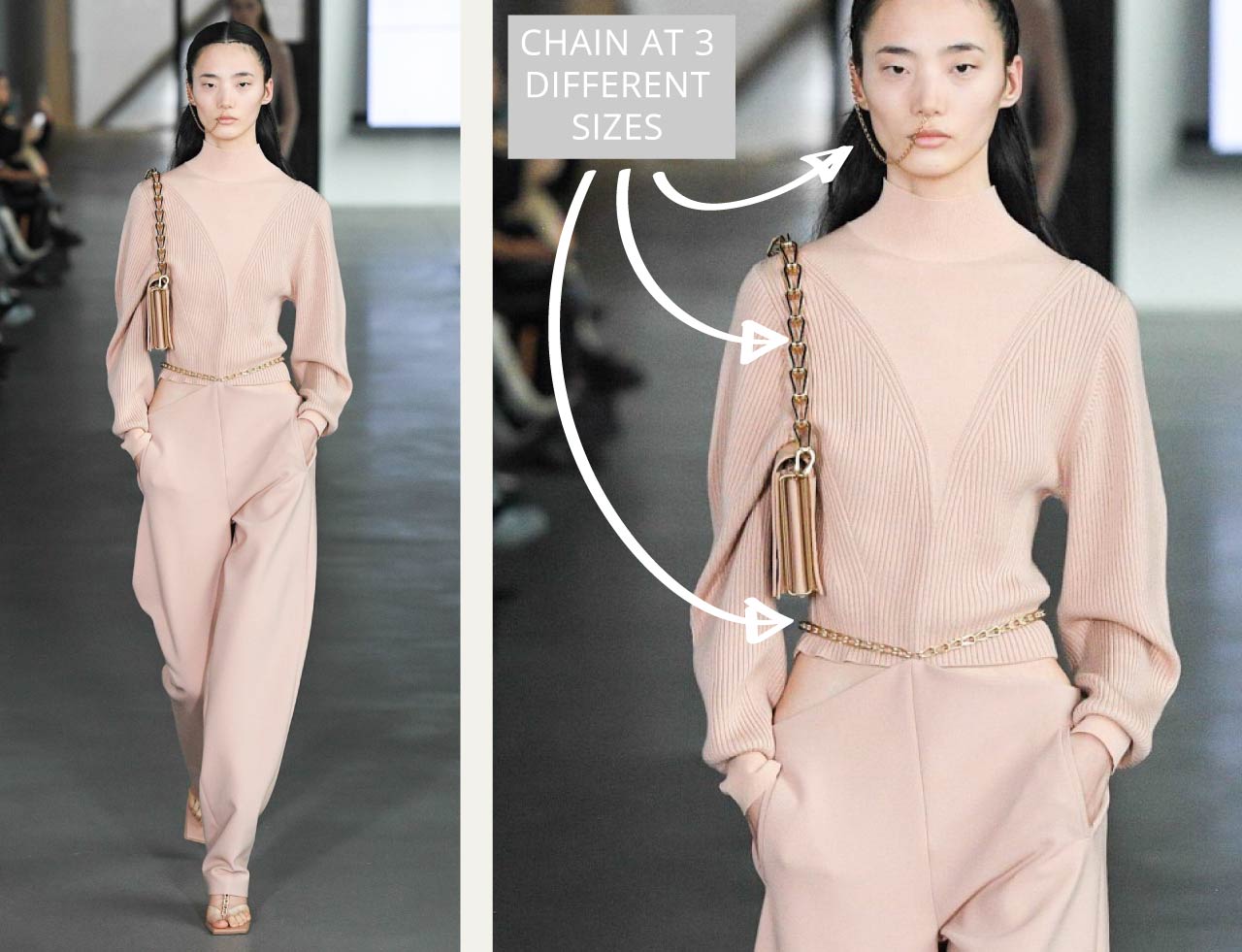 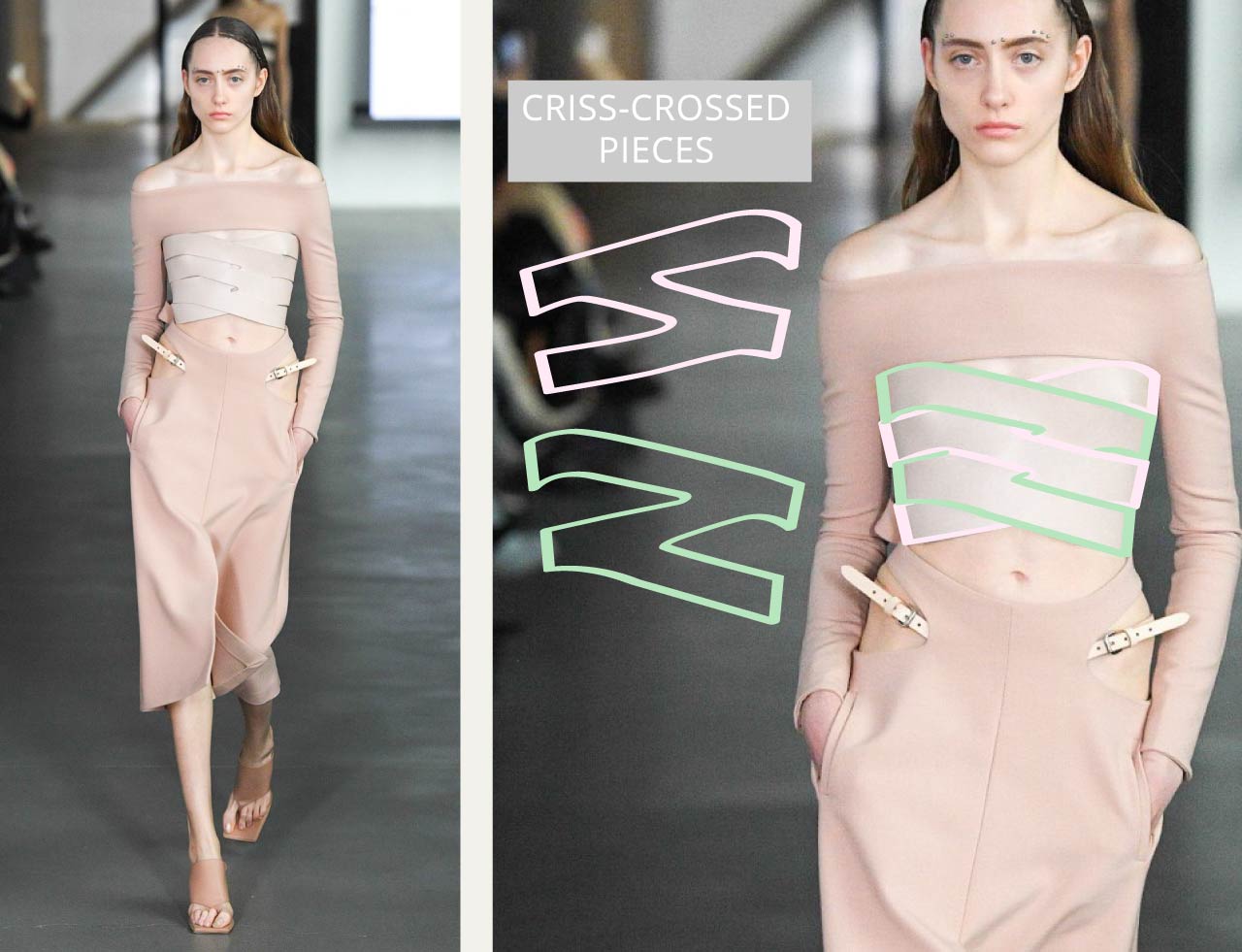 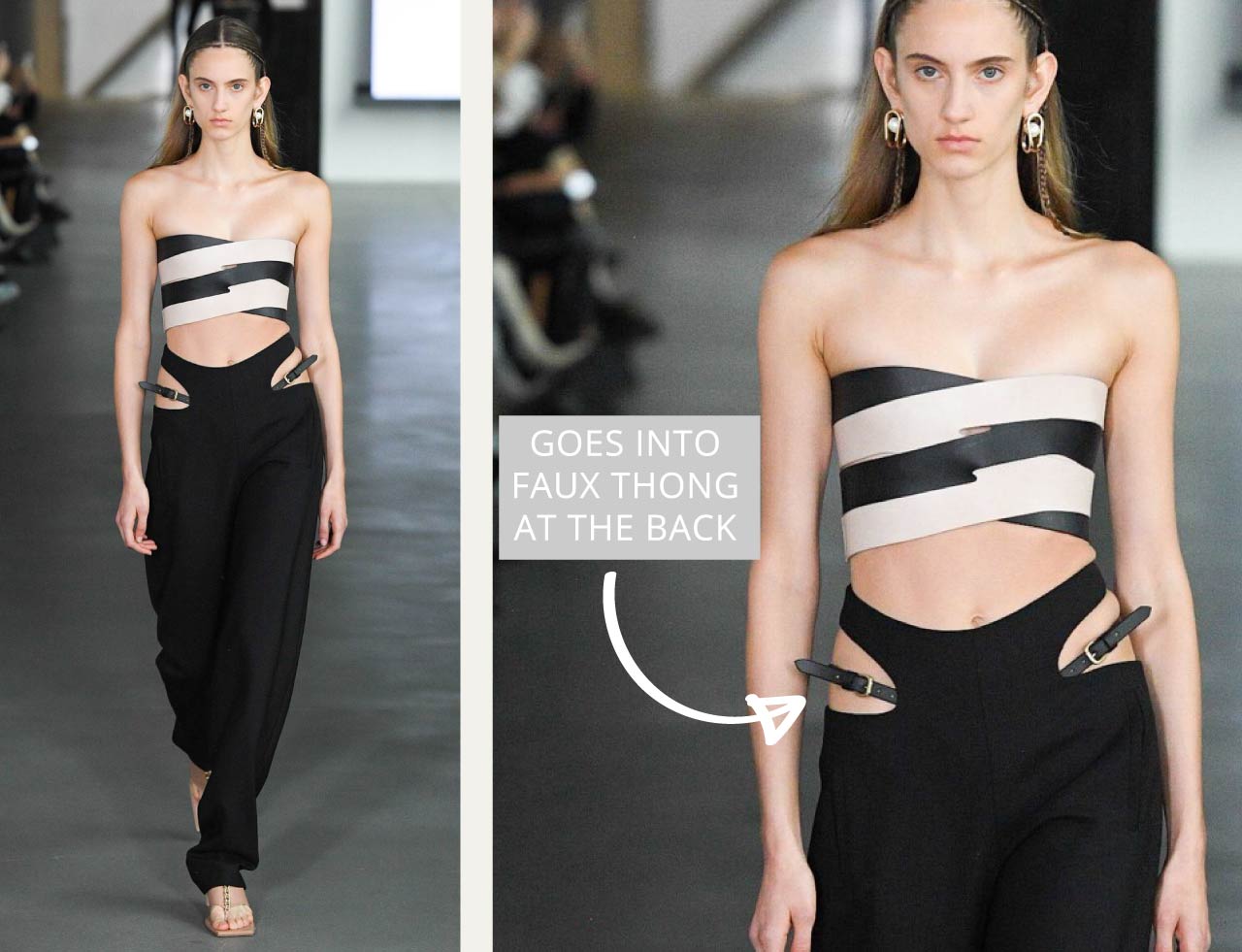 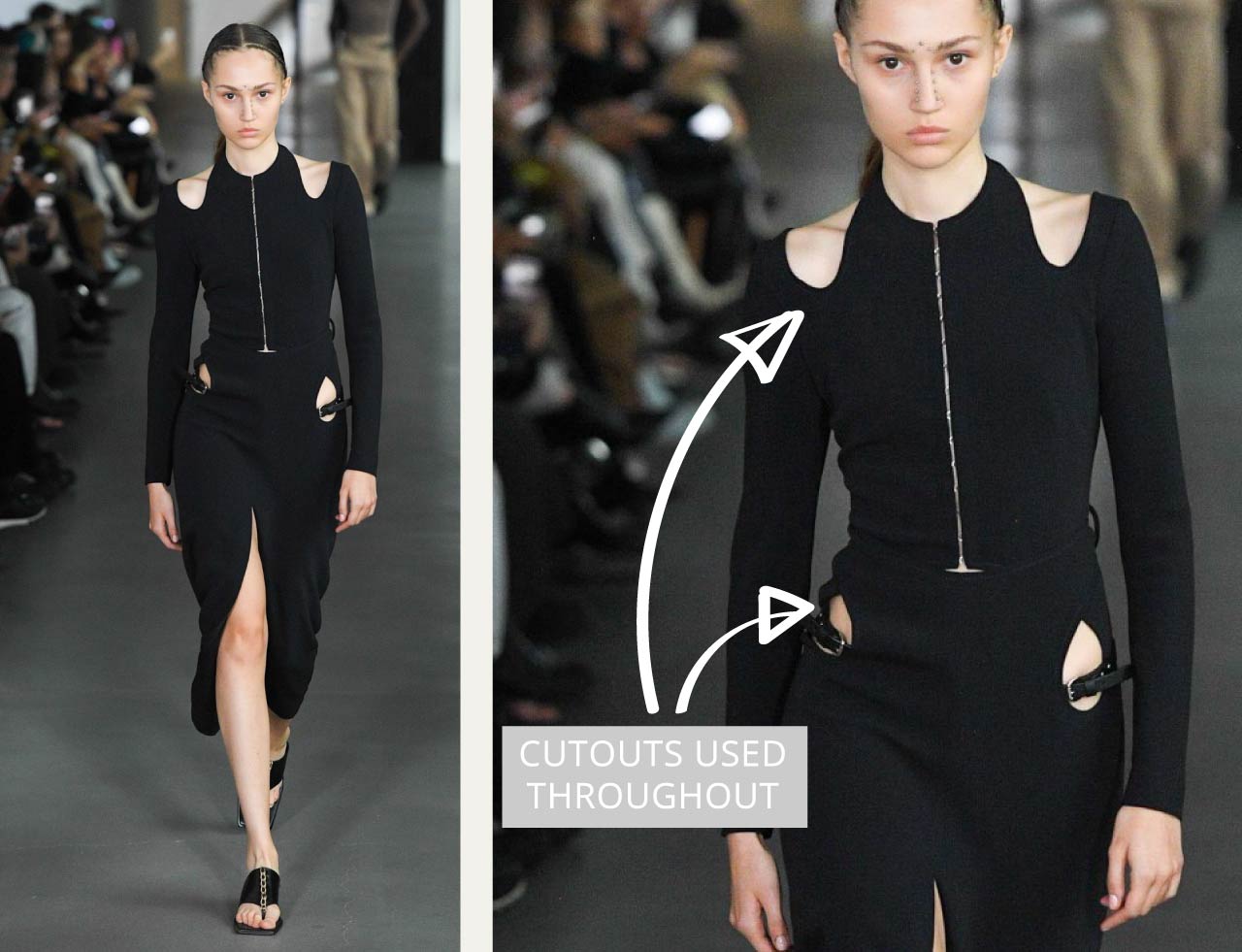 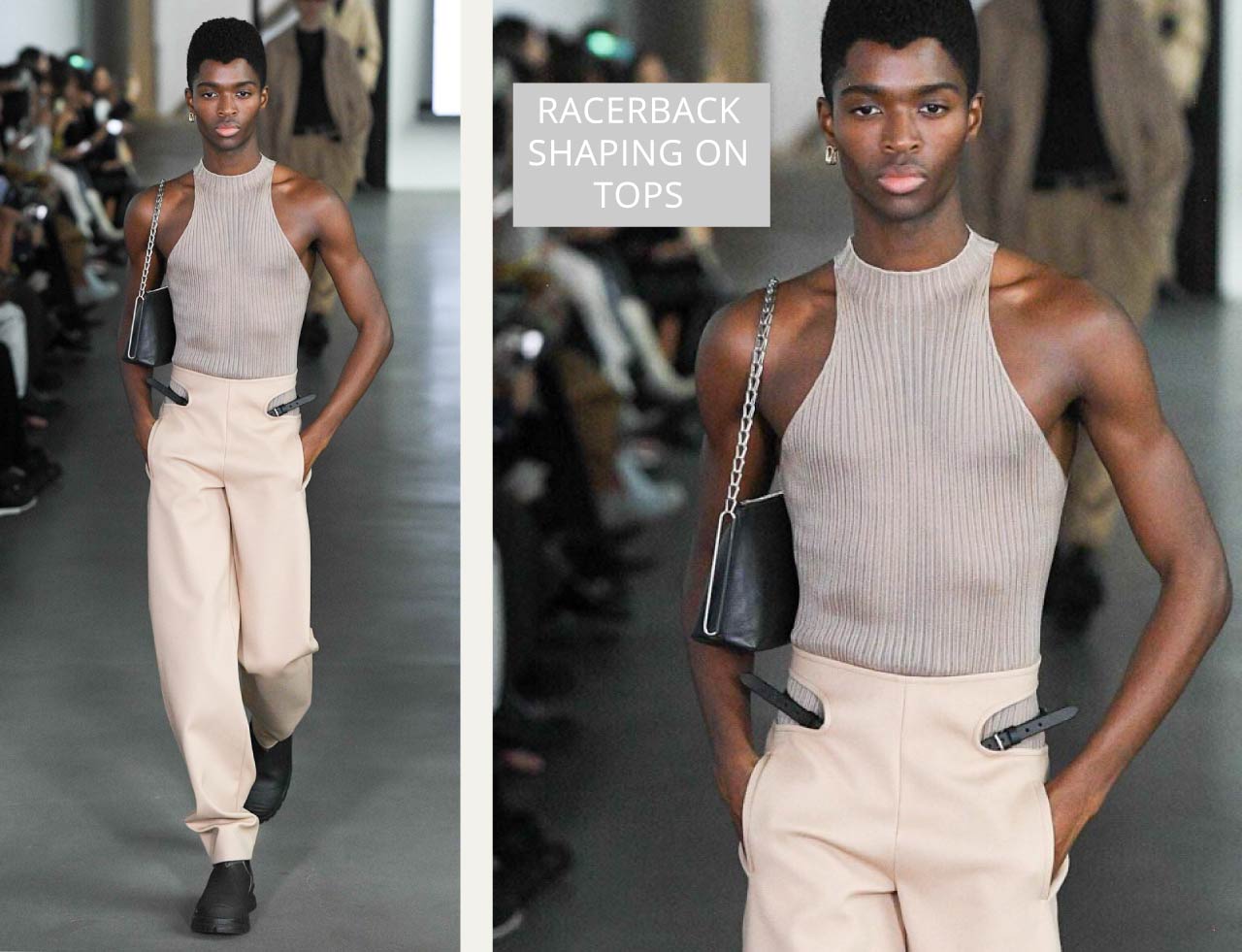 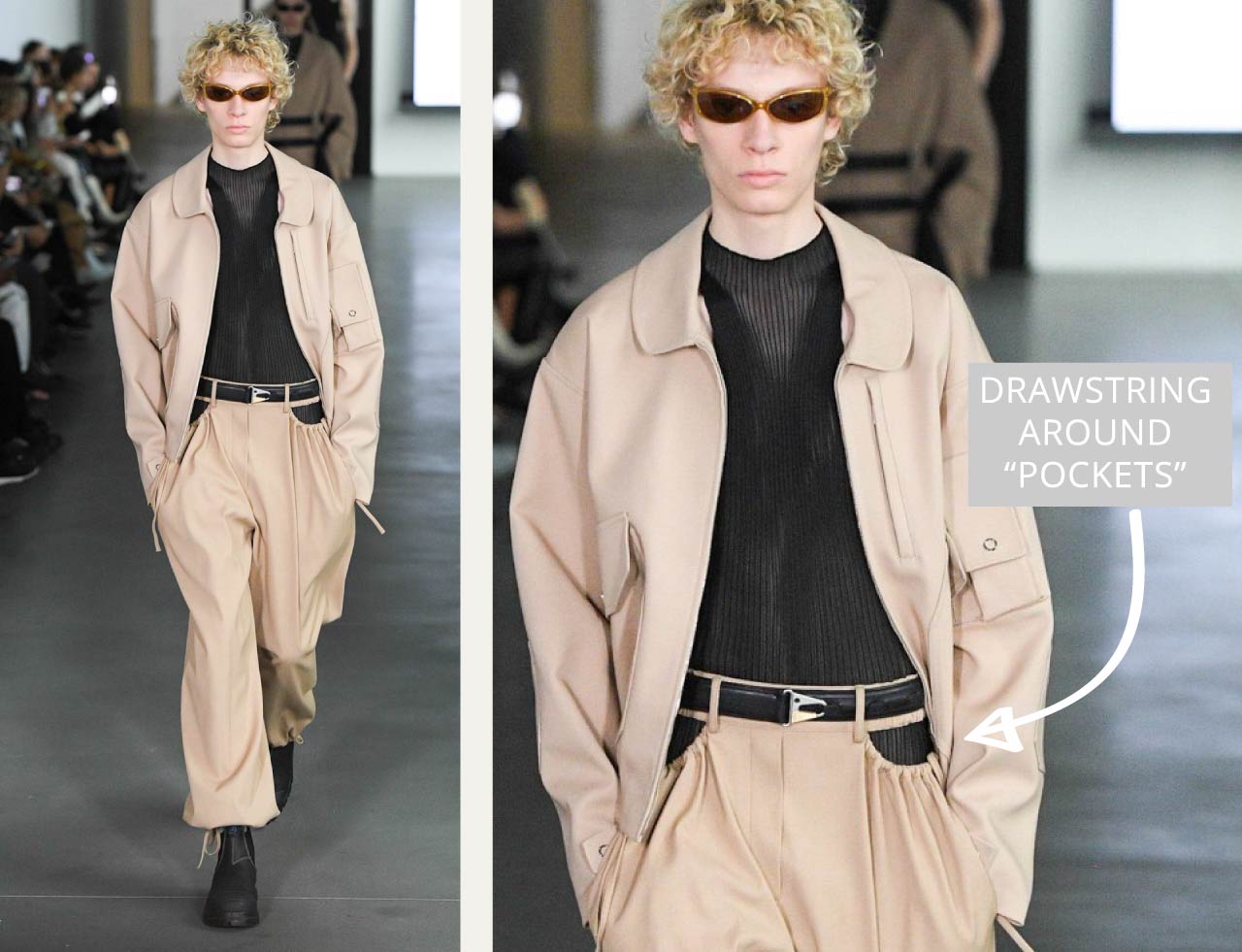 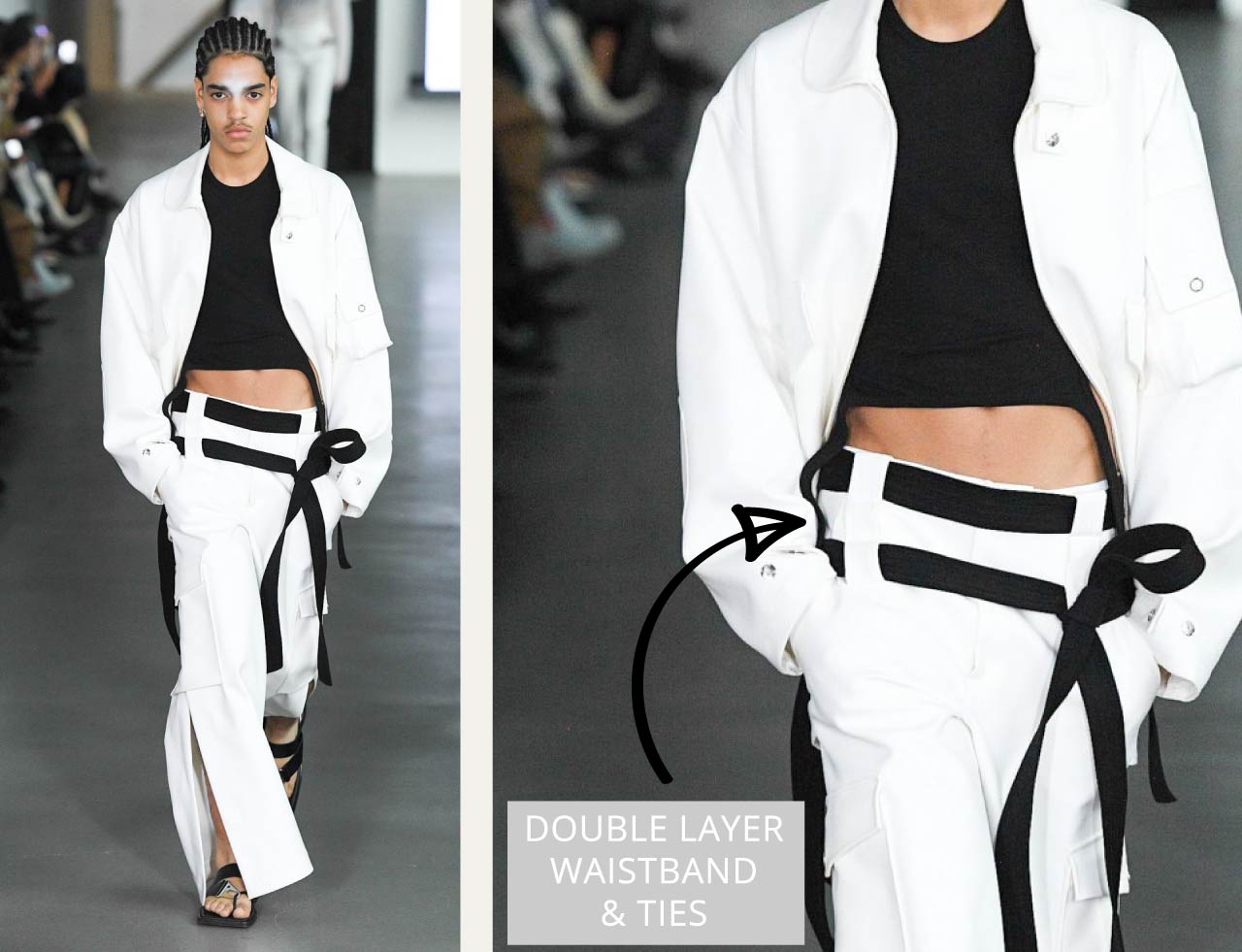 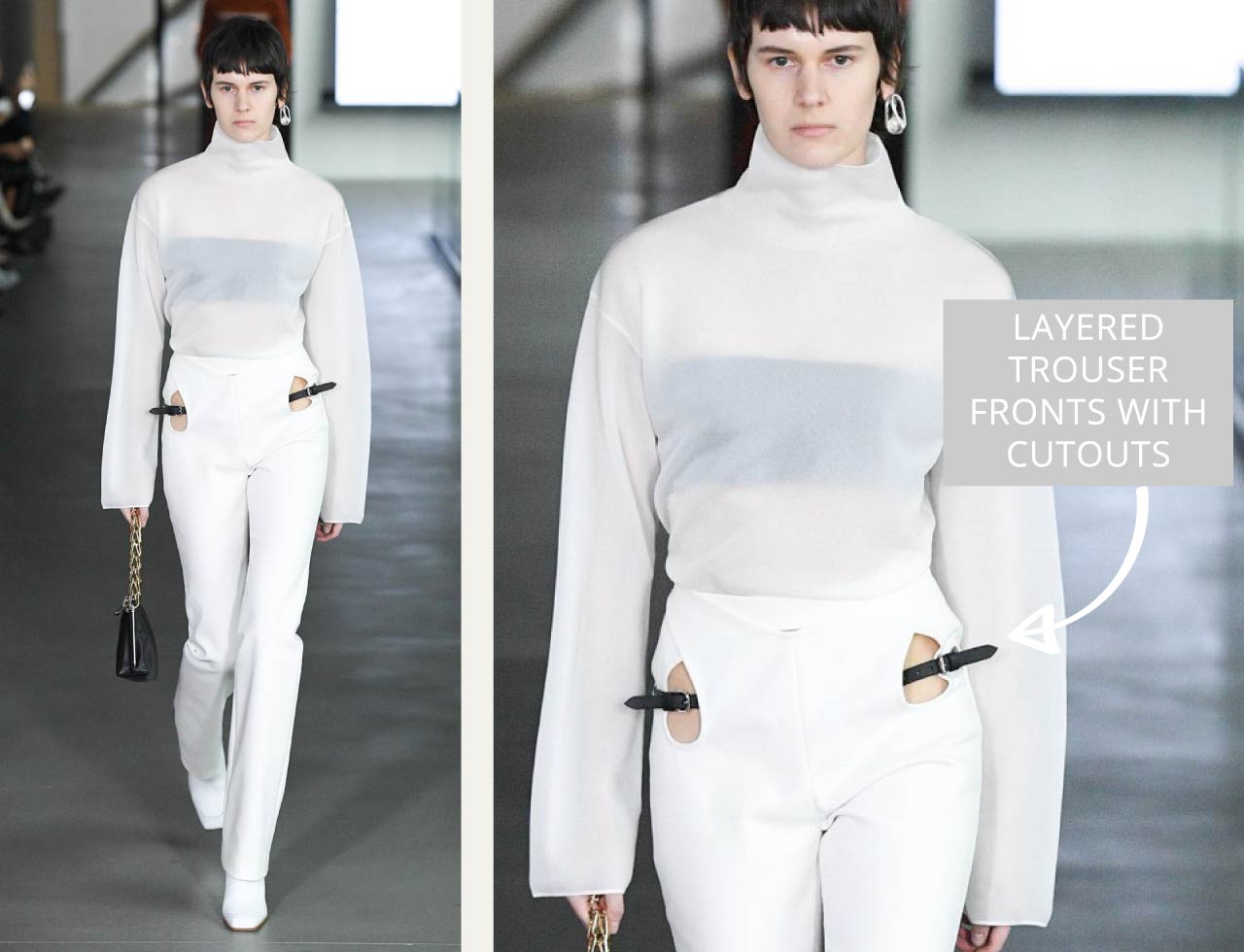 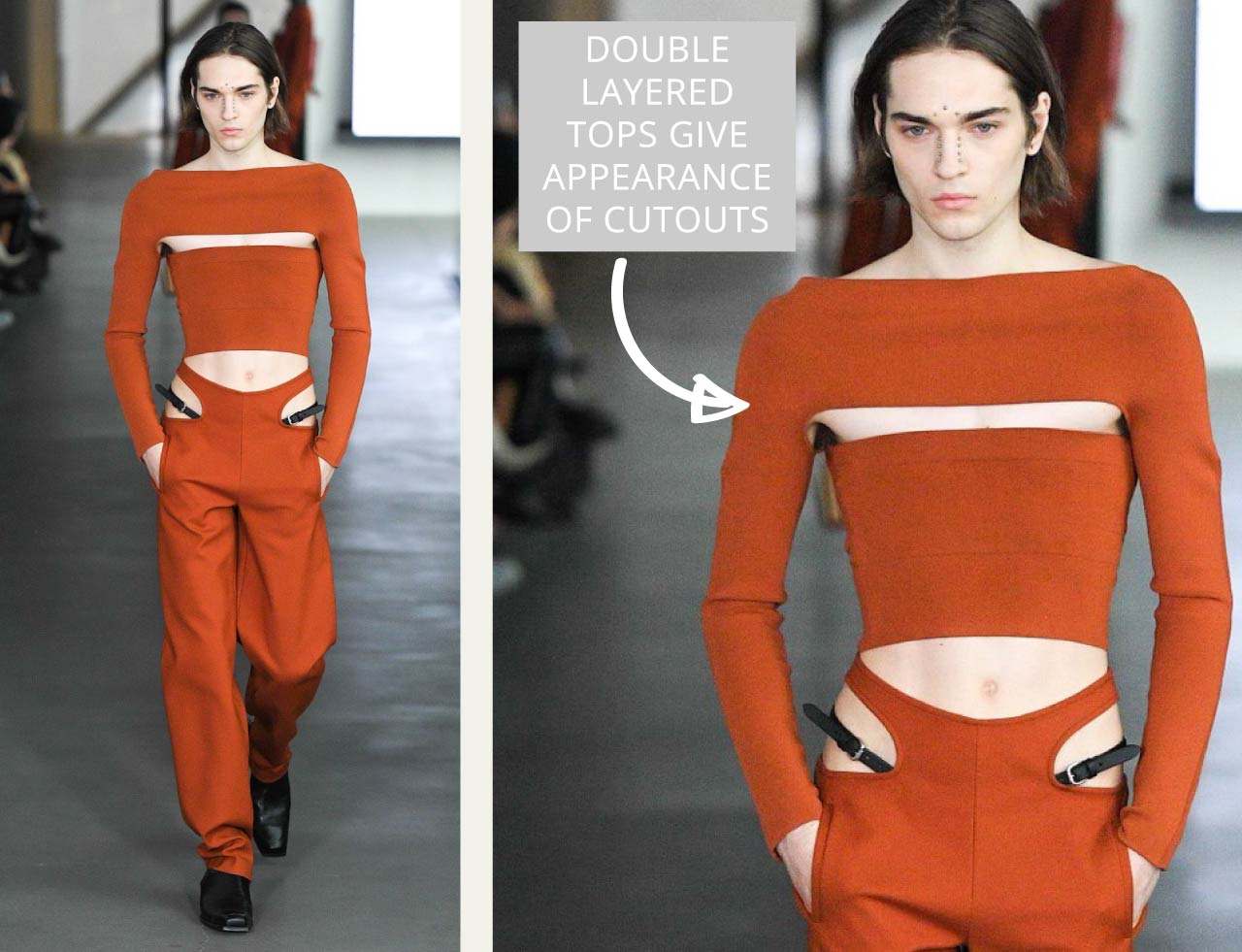 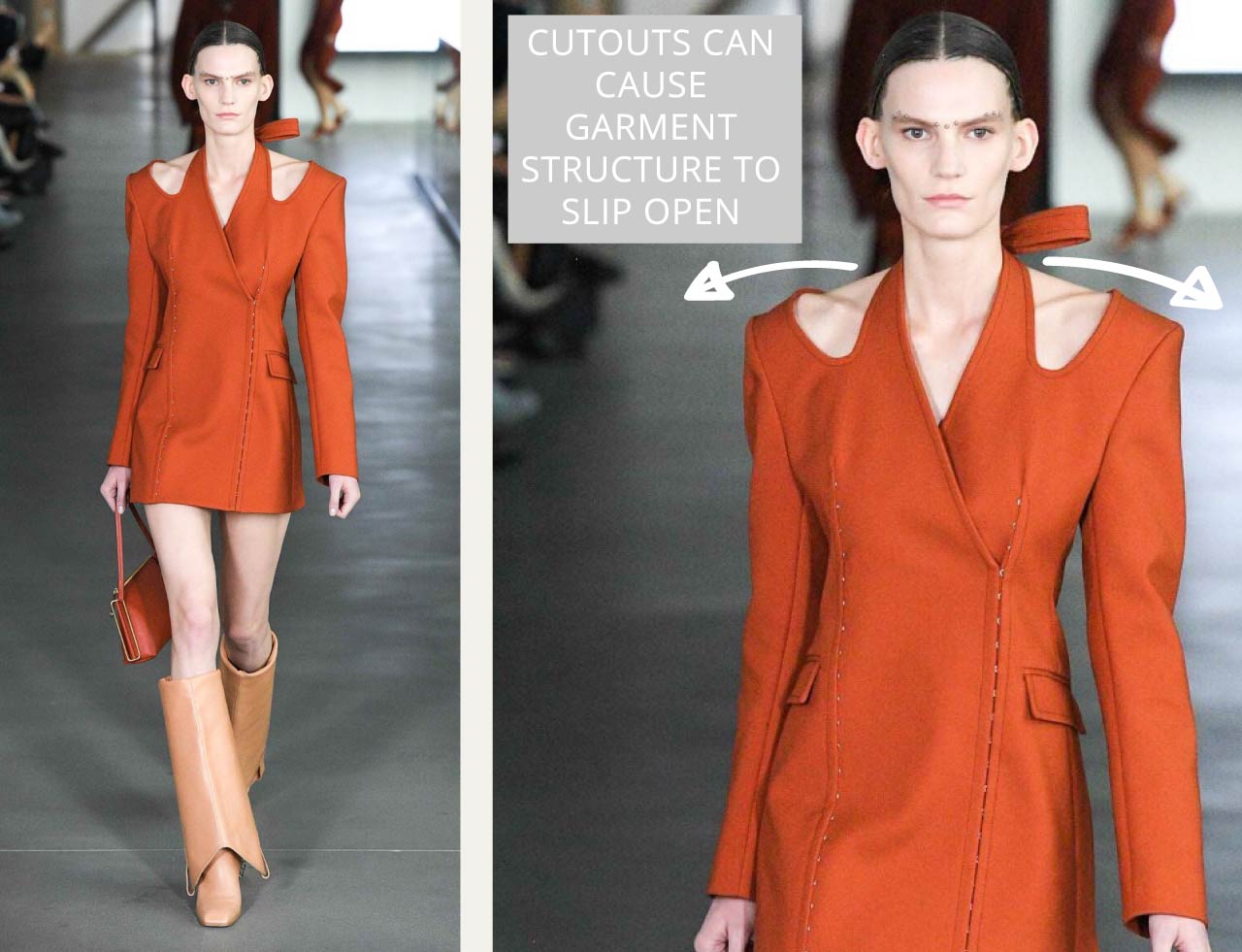 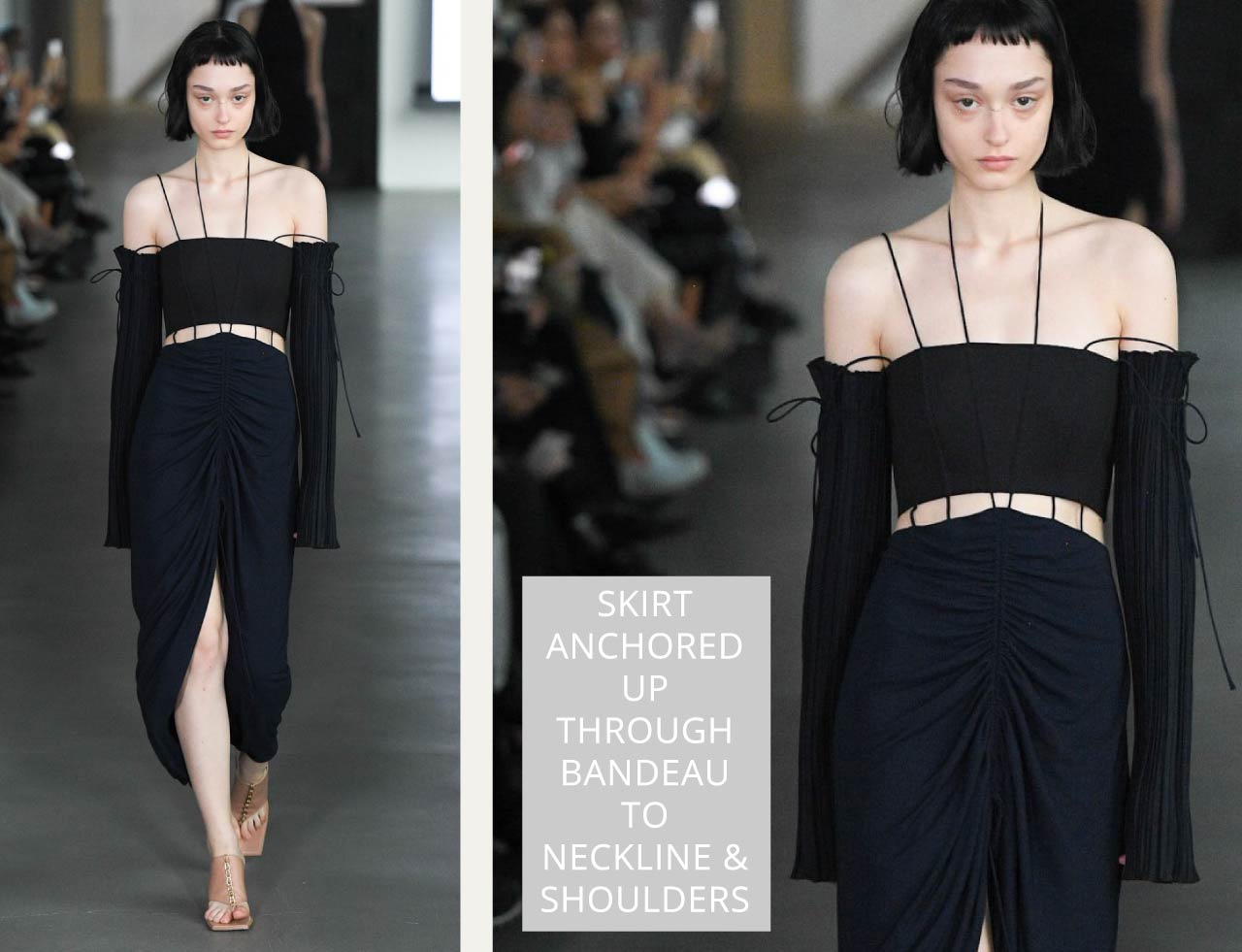 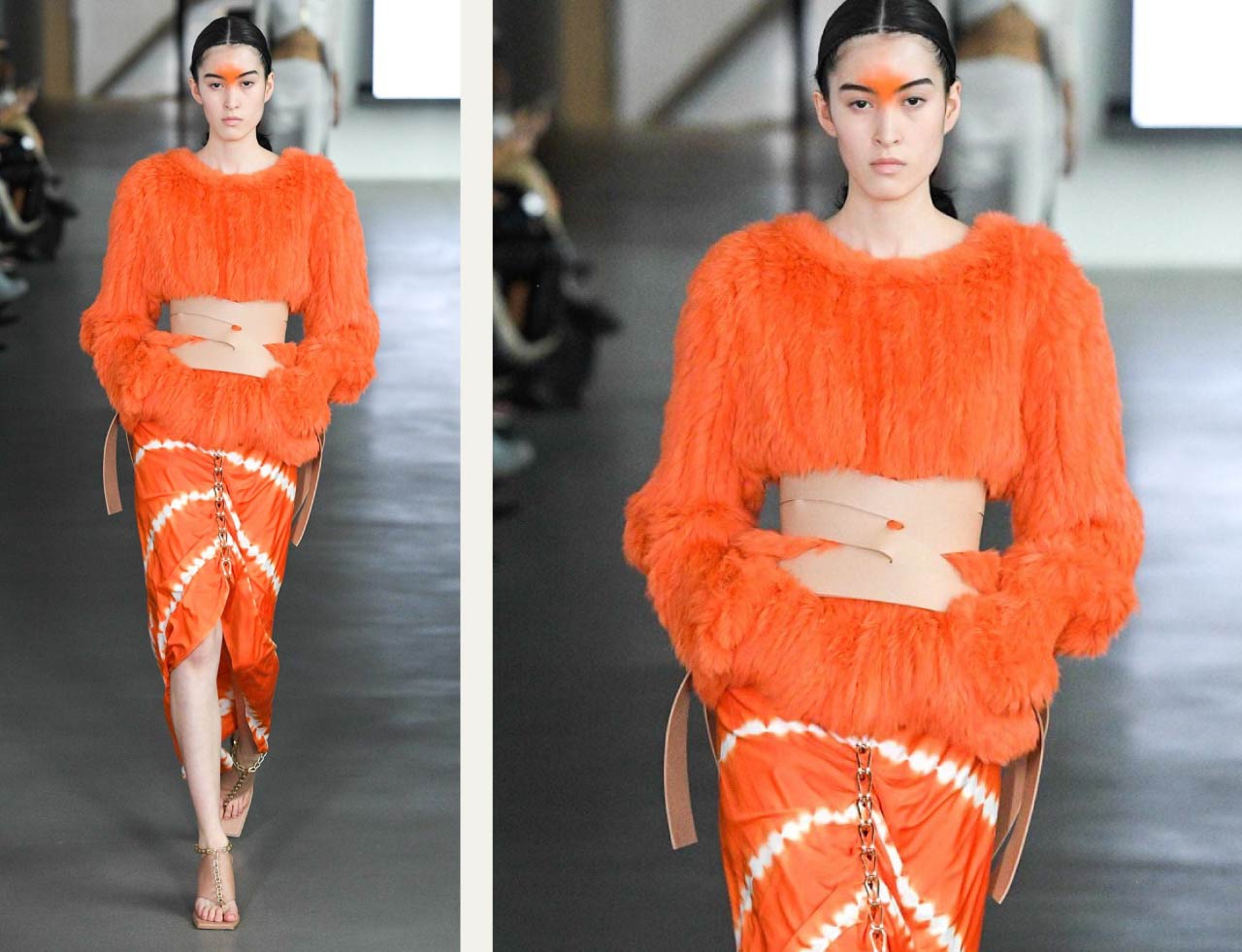 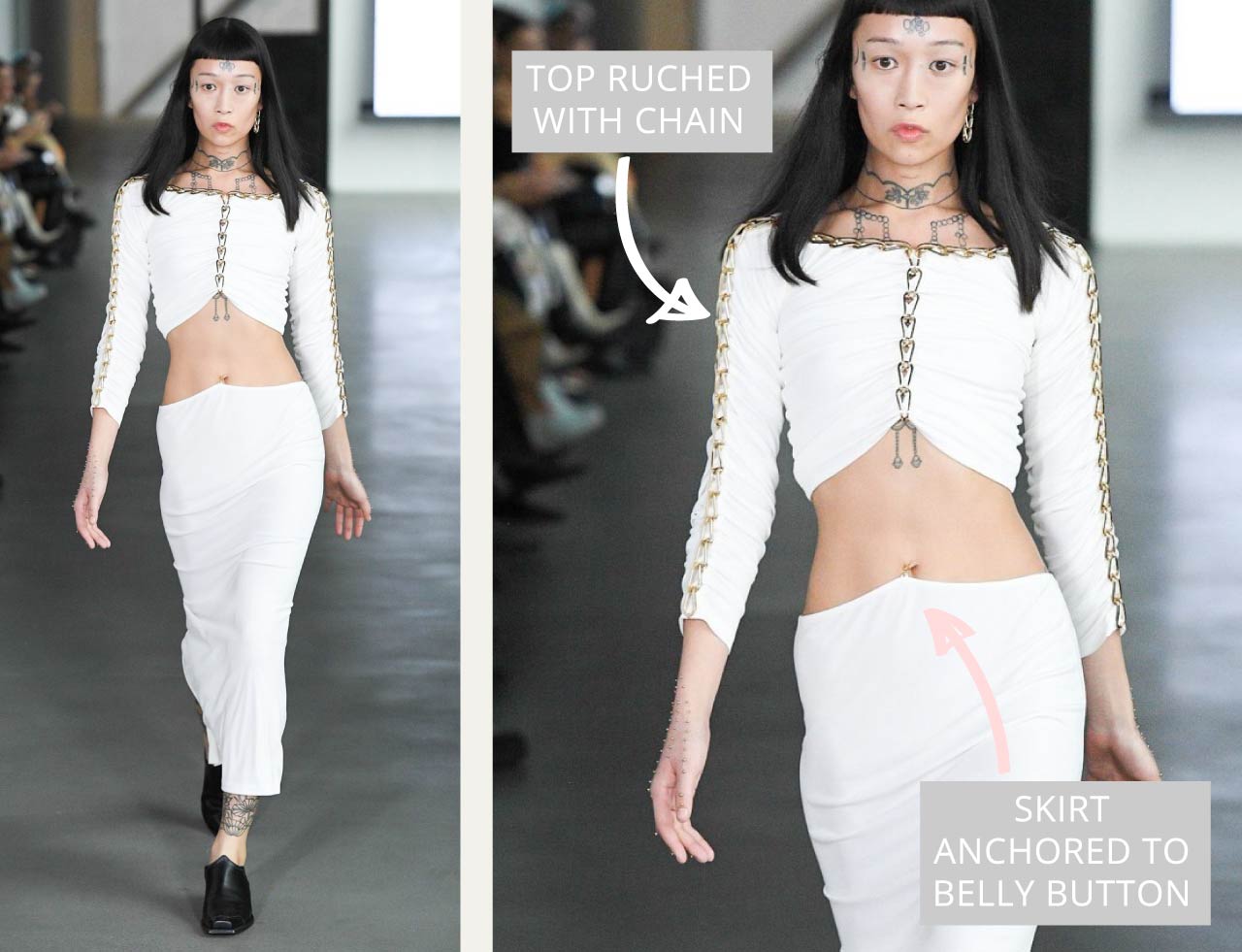 I believe that is ‘hook and eye’ tape used on these garments. Hook and loop tape is Velcro, and that does not look like a Velcro closing—-no overlap!!

Yes, absolutely, this is not velcro. It was originally described as hook and loop tape for the non-sewers, but we don’t need there to be confusion with velcro so this has been amended in the article text and image descriptions.

The cutouts on the orange jacket dress are very interesting. It appears that it might tie in the back (seeing the edge of a bow?). Any idea what the back might look like? I love the hook-and-eye tape down the princess seams—very original!

Hi Mary, Yes it is worth looking at the video on the Dion Lee website to see how some of the details wrap around to the back and for close-ups of the hardware: https://global.dionlee.com/collections
You get a glimpse of the back of that orange jacket at 9:50 in the finale as the model is going up the escalator – basically, slightly boat neck shaped neckline, with the ties forming a bow as you thought.