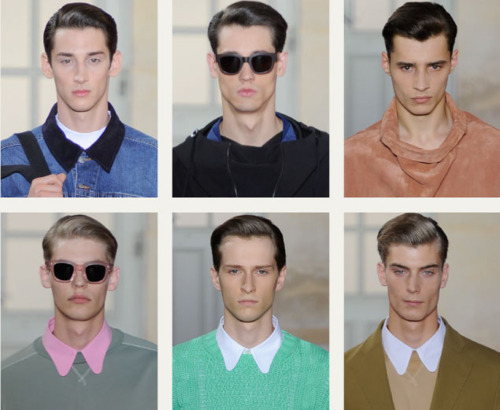 Ever a game of details, menswear is often best dissected by focusing on the individual elements that come together to make up the collection. For the images below we will focus on the collar shapes and necklines of the Spring-Summer 2012 menswear shows.

On the whole the necklines often appear high and perfectly round, and this shape was most commonly seen on t-shirts, tank tops and knitwear pieces. Shirt collars are generally wider and longer, rather than the skinnier, finer collars that we’ve seen over recent years. Jackets were often 3 button, or double breasted and this has had the effect of bringing the jacket break point higher on the body, making the lapel line shorter, and forcing the collar out wider in a shape that is reminscent of the 1940s, a style that was also revived in the 1970s. On other jackets, a wide collar was added to a round neck jacket shape, again bringing the focus of the eye up higher on the body, as opposed to say a one button jacket that buttons down lower at the waistline that has a generally more lengthening silhouette.

The shirt collars for the Acne menswear collection above featured a rounded tip that gave the shirts a more stylised, cartoonish look especially when paired with the candy coloured pastels. There was also some interesting use of cowl-style necklines in the more luxe sportswear pieces, where the collars had more volume around the neckline. 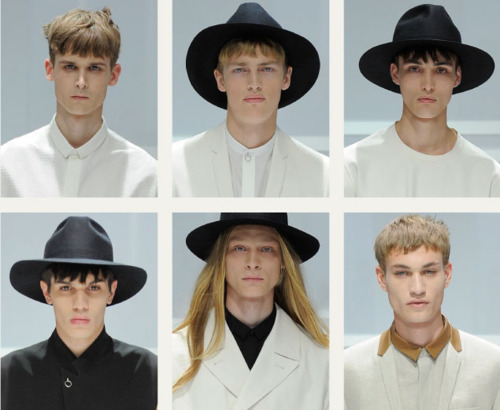 The collars at Dior Homme were slimmer at times, but often within the context of a more voluminous shirt shape which gave it a more contemporary feel. There were also shirt variations with a collar stand only, often referred to as a “grandad neckline”. In the double breasted styles we see the effect of the wider lapels, shown above on the cream jacket and paired here with a black slim line shirt collar. There were also times where the jacket lapels were fastened over the top of each other with a metal ring fastening, to create a high neckline. This created a more triangular shaped silhouette for these garments. 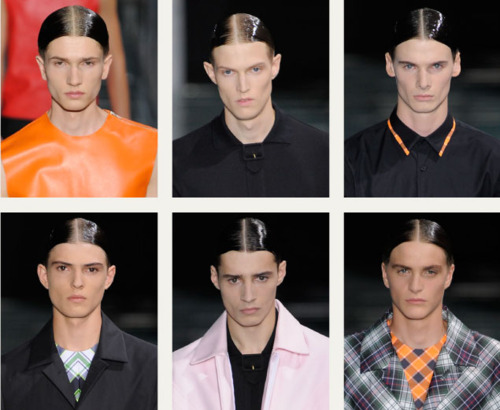 The images above from the Raf Simons collection, shows examples of the wider squarer collar that has been added to a rounded neckline. There were also some other details added to the Raf Simons garments at the neckline such as contrast trims on the collars and the buckle detail on the placket of a polo shirt. 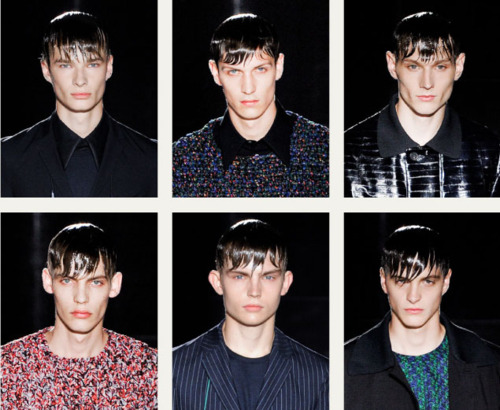 The clean, rounded neckline continued in the Jil Sander show on repeat print t-shirt shapes and chunky knitwear. The shirt collars here often appeared to be cut in a silk fabric, or some sort of satin texture and the collars were wider and more elongated. 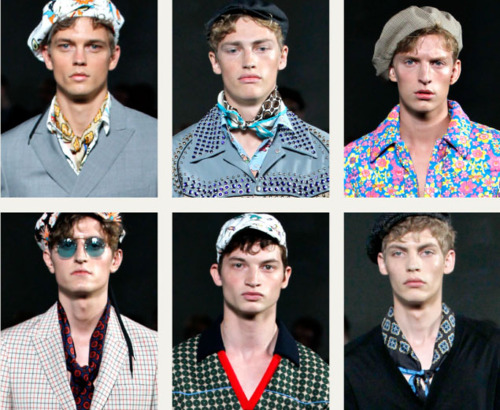 There were actually many neckline variations at the Prada show, from double breased jackets with wide lapels, to longer slimmer cut lapels, v-necks on knits and polo shapes and wider shirt collars that were covered in jewels. One of the main features of this show that pulled focus to the neck lines was the repeated use of the neck scarves and these were often used to fill in gaps around the neckline on the lower and more v-neck styles and underneath open shirt collars. 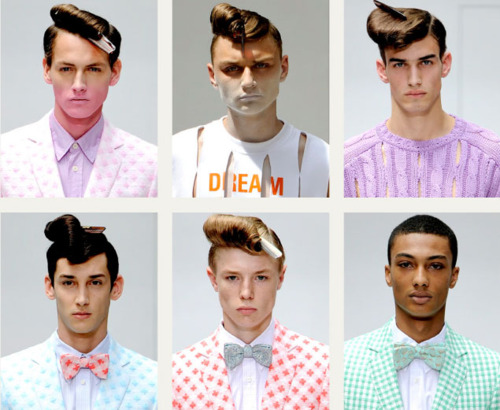 At the Walter Van Beirendonck show the cuts of the jackets were quite intricate and the fabrics were full of colour and texture and these details was balanced by more classic shirt and lapel shapes. This was one of the few shows to use ties, and bow ties at that, and they appeared to be made out of the same colourful jacket fabrics, but shown contrasted against the other colours within the look that they were paired with.