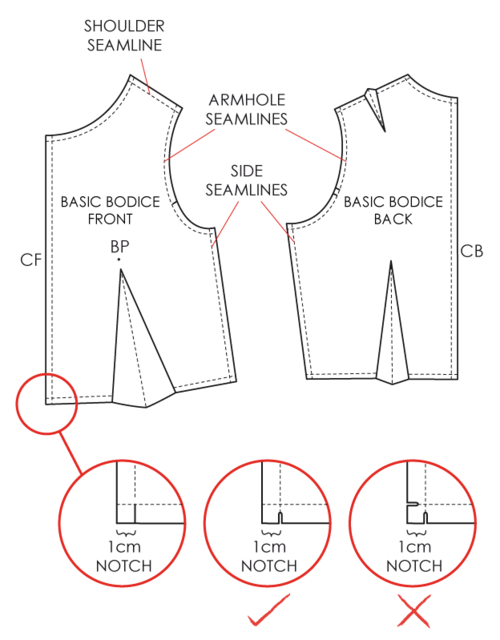 When taken back to it’s most basic level, sewing is the means by which we have clothed ourselves for thousands of years. According to wikipedia the act of sewing dates back to the stone age, where even before there was woven fabric humans would sew together fur and skin using handmade needles and threads.

The join or stitching line where one fabric meets the other is called a seam, and although seams can now be sewn by hand or sewing machine and finished in different ways, the basic principle remains the same – two pieces of fabric are laid on top of each other and a needle and thread goes back and forth along a line, joining the two together. When pattern making it is always important to remember to allow space for the seam, as you can’t sew right on the edge of the cut fabric or else it will fray. This is what is known as the seam allowance.

On patterns the seam allowance is most often marked by a small notch which indicates how far from the edge the stitching line is to be sewn. On patterns for home use the seam allowances are sometimes unfortunately not marked on the pattern, leaving the sewer to rely on the make instructions.

In reference to the picture above:

Seam allowances can vary from a small amount (6mm) up to a larger amount (1.5cm) where room may have been left to make adjustments. In haute couture sewing some reference books will explain that the seam allowances are much larger then 1.5cm to allow space for fittings, and to allow for alterations later on and the same is true for some areas of tailored suits. For more commercial garments the seam allowance will be at the minimum amount required in order to get the most out of the fabric.

Here are some general rules for seam allowances:

Pattern images by The Cutting Class»