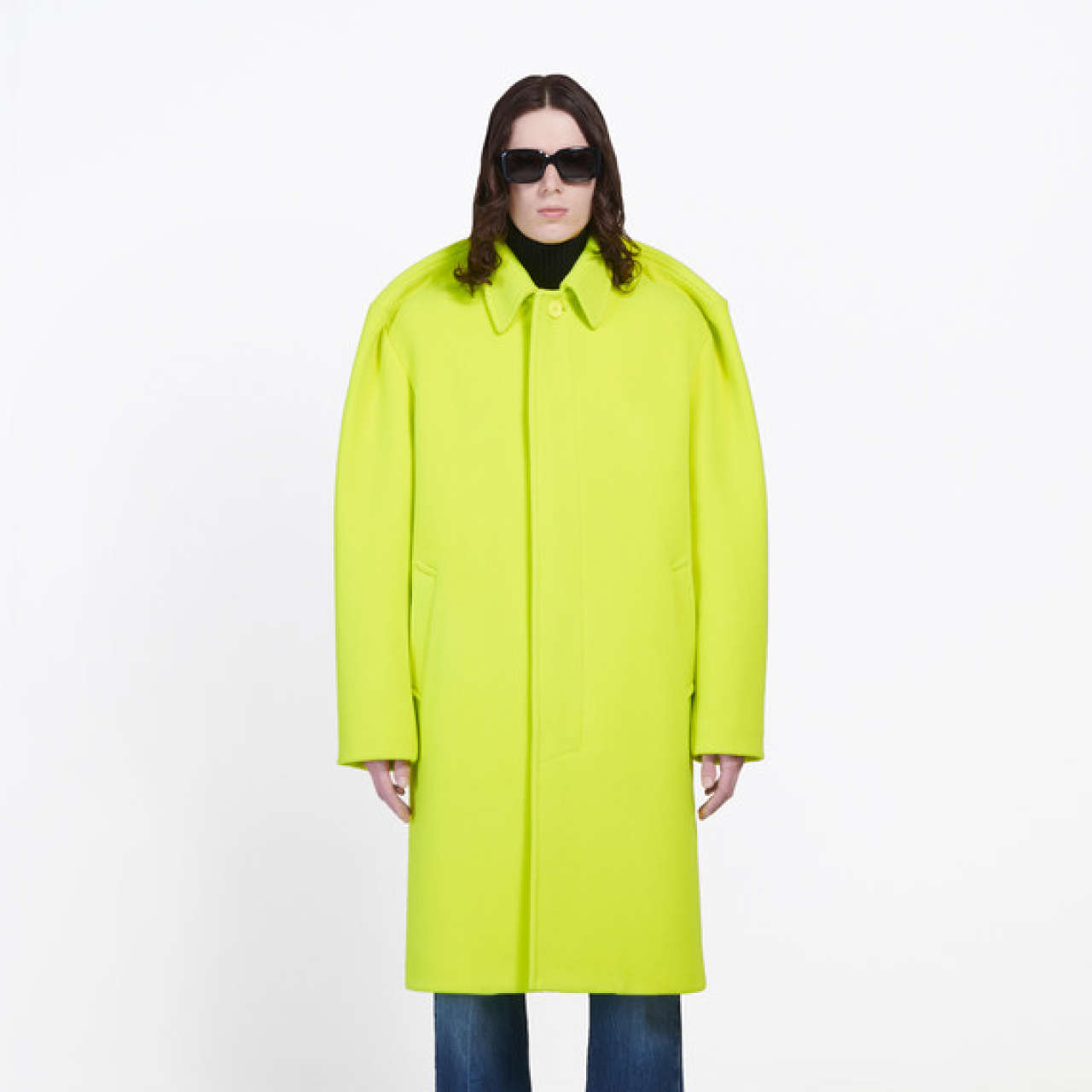 Sometimes it seems like a bit of a shame that there was so much hype surrounding the work of Demna Gvasalia at Vetements and Balenciaga. Some of the designs that came off as a bit gimmicky have tended to obscure the serious work on silhouette innovation that happens at Balenciaga and sometimes distracts from the craftsmanship of the garments until you see them in real life.

For the Autumn-Winter 2019 collection, one of the details of interest was how a pinched shoulder silhouette played out on various styles from outerwear to knitwear. Across these styles, the designs appear to be created by specially cutting the patterns longer and with more volume across the top of the shoulders and down the outside of the arms. This extra volume can then be loosely ‘pinched’ with well-placed stitching. Even though the top is pinched, this means that the sleeve armhole has to be cut higher so that the sleeve head fits into the elongated armhole. 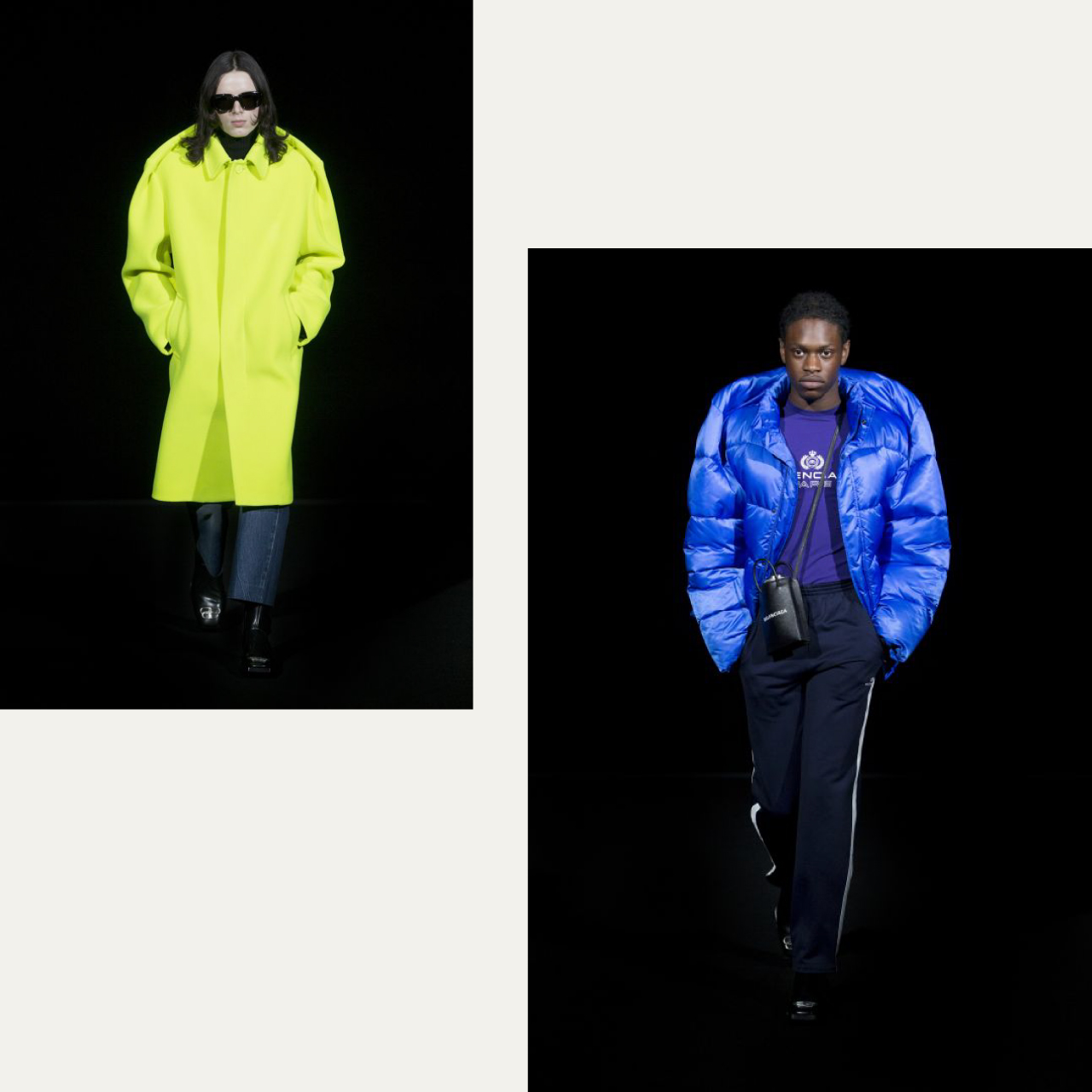 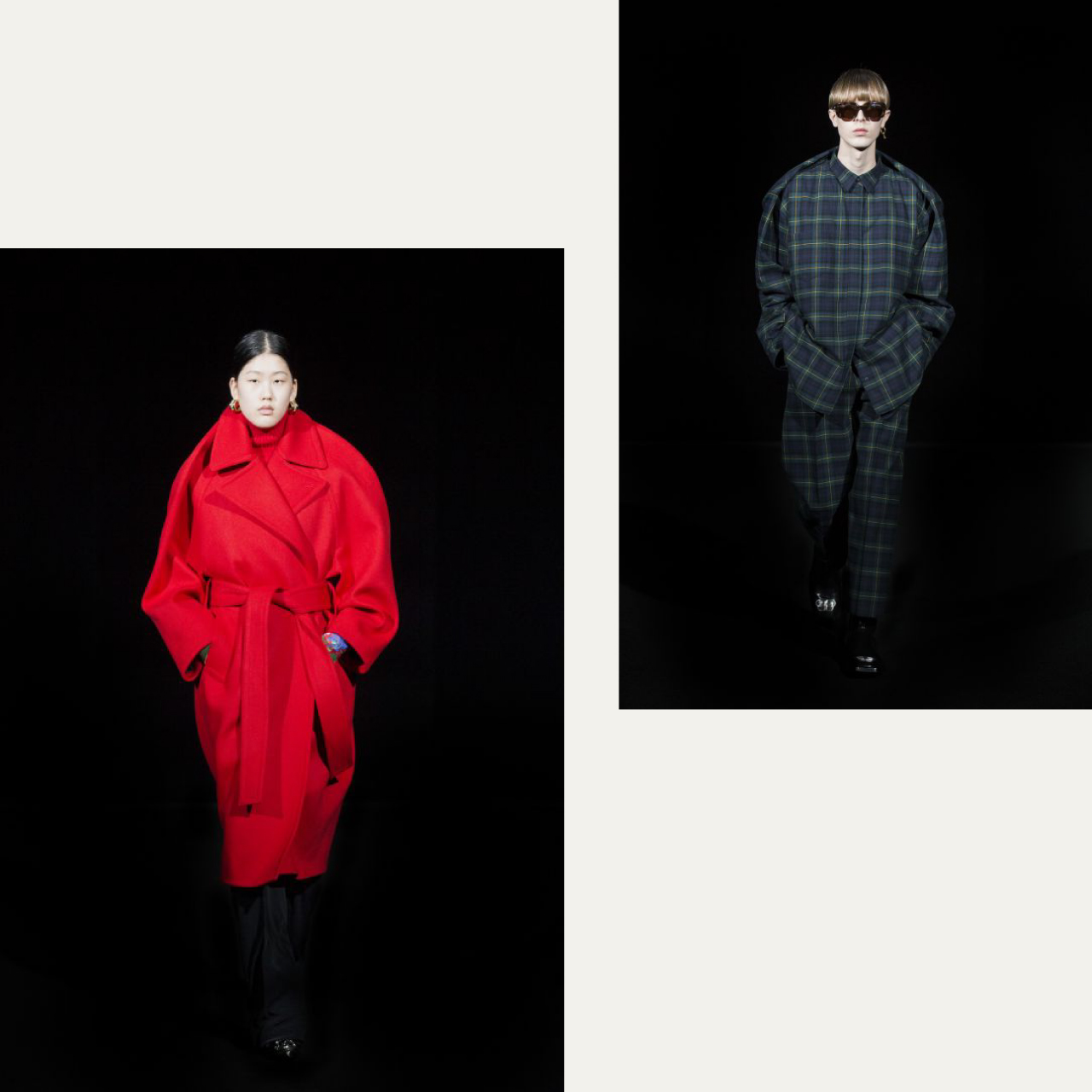 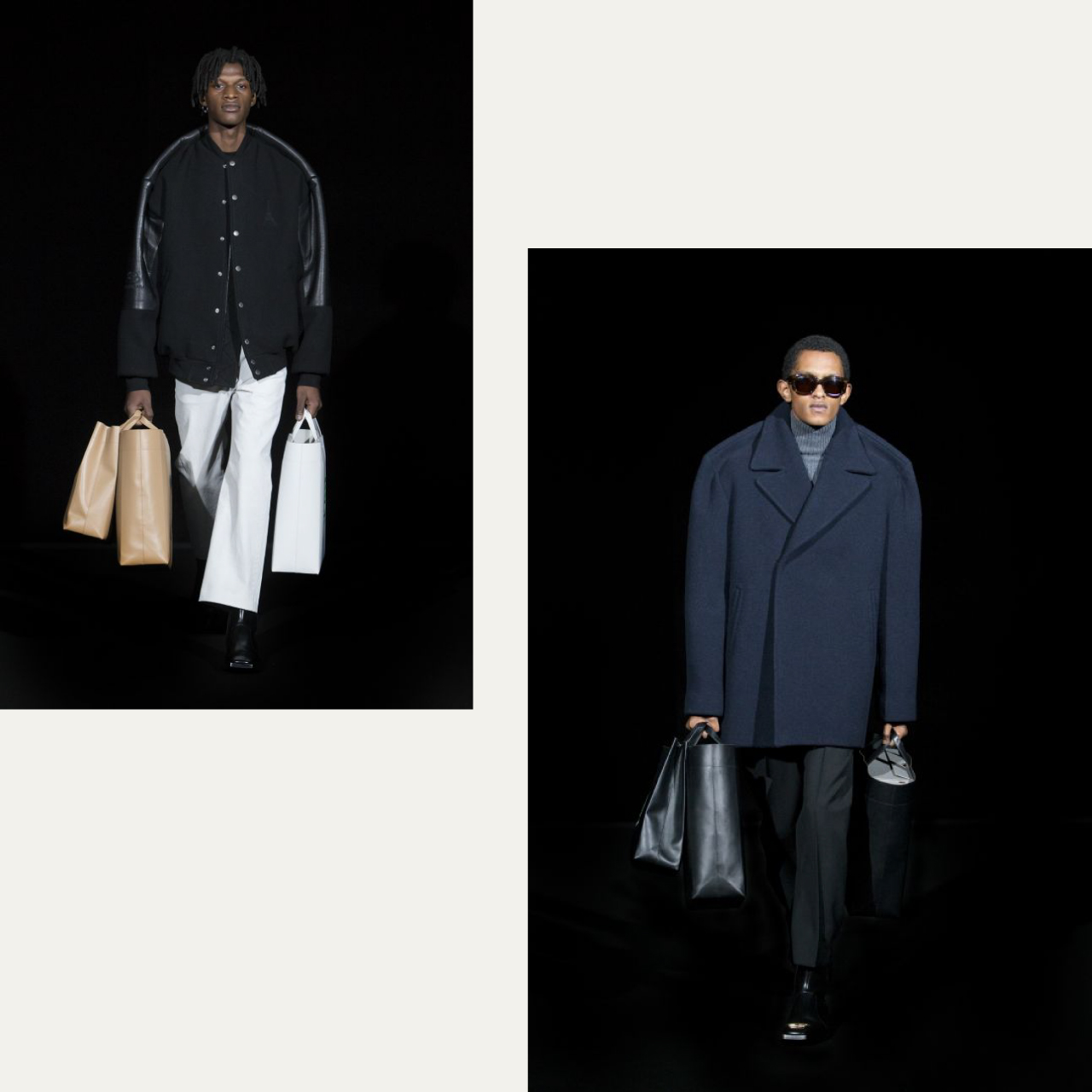 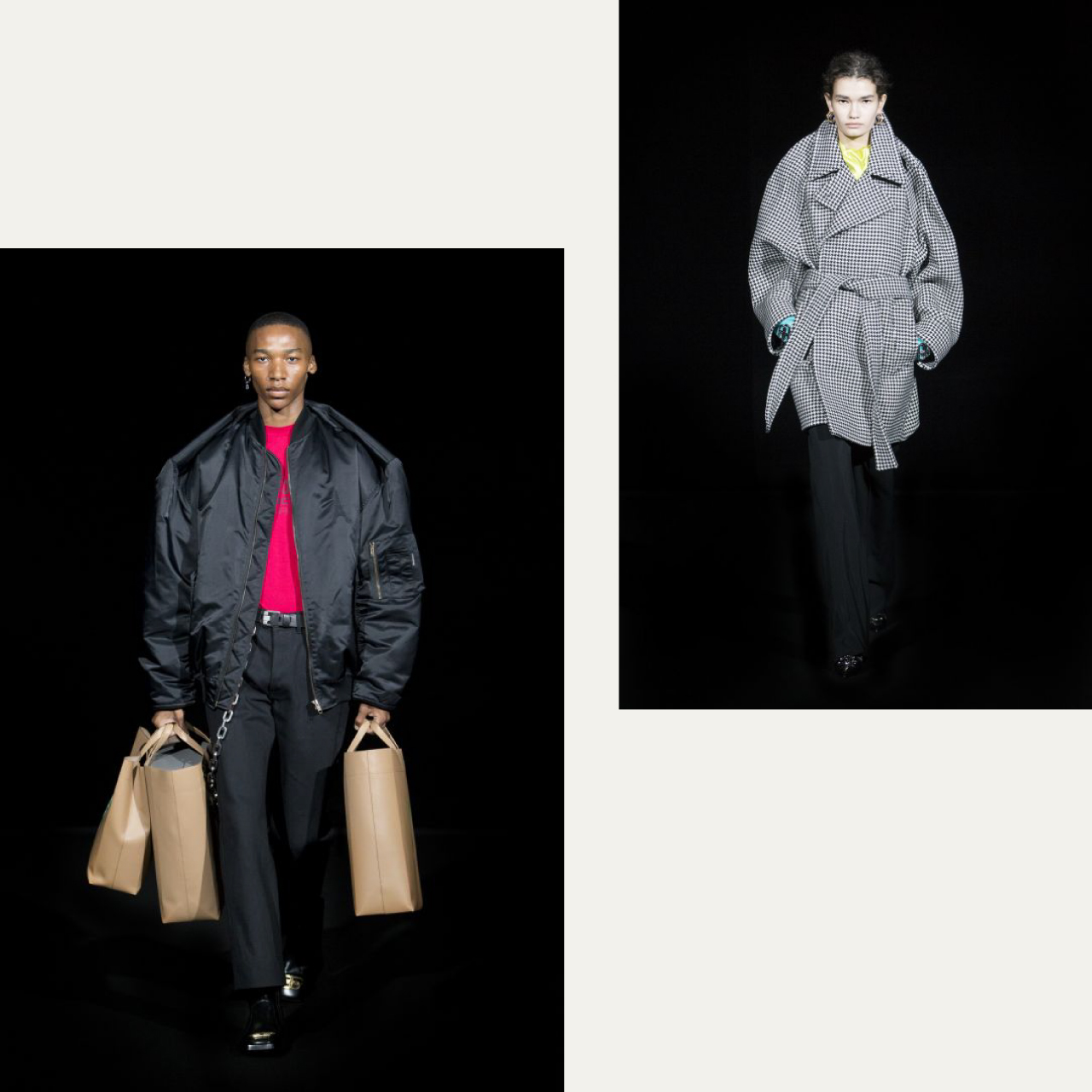 The main motivation of the pinched shoulders at Balenciaga is to create something that looks spontaneous, so the construction to hold the shape has to have a light touch – when viewed from the outside at least. No heavy-handed topstitching appears to be visible to hold the shape in place. It is likely that this is also supported from the inside of the garment in ways that do not show through on the outside of the garment. For example, you might have special supports between two shoulder pads, or be able to anchor the self fabric to the shoulder pads using only the seam allowance, so the stitches aren’t visible on the outside of the garment. 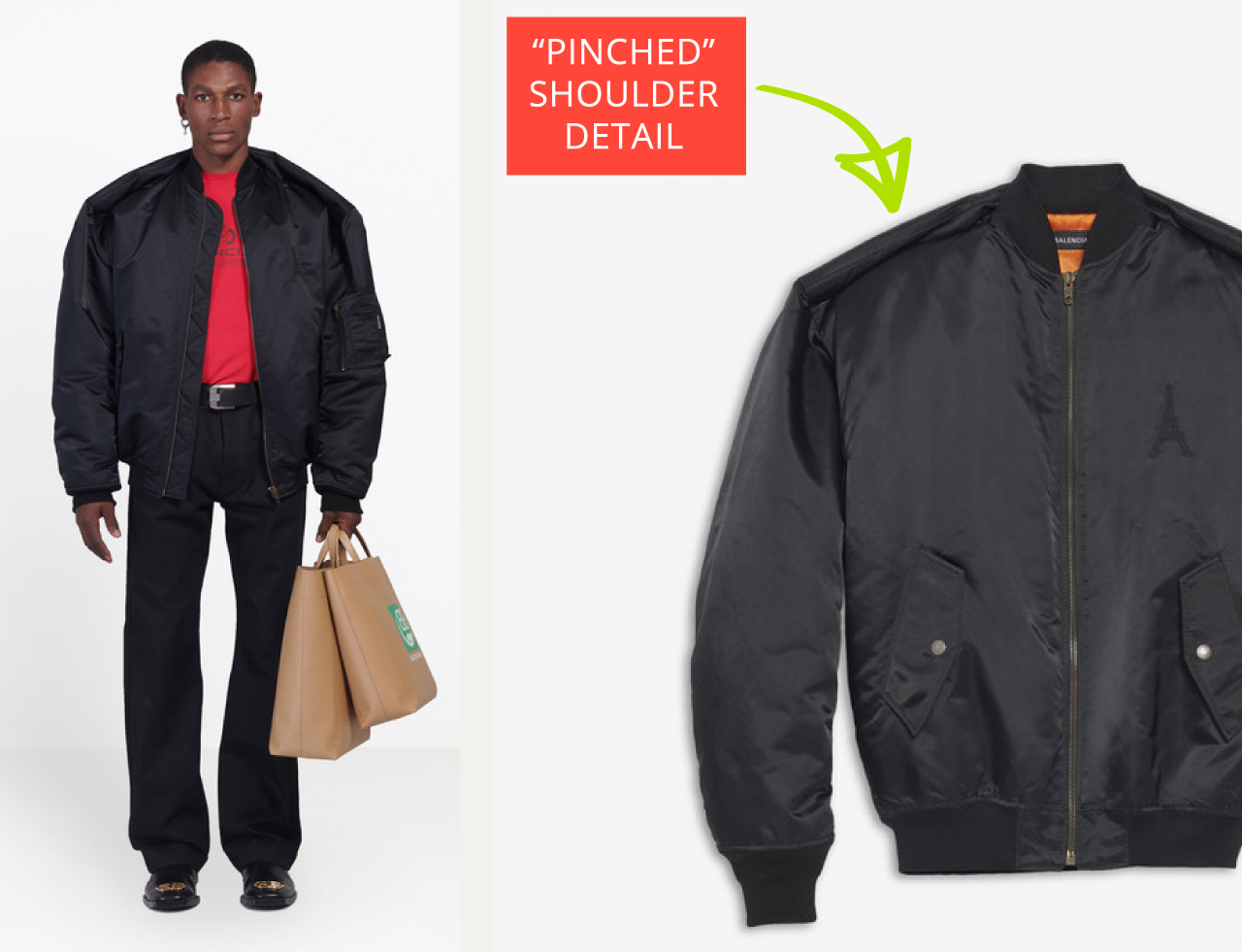 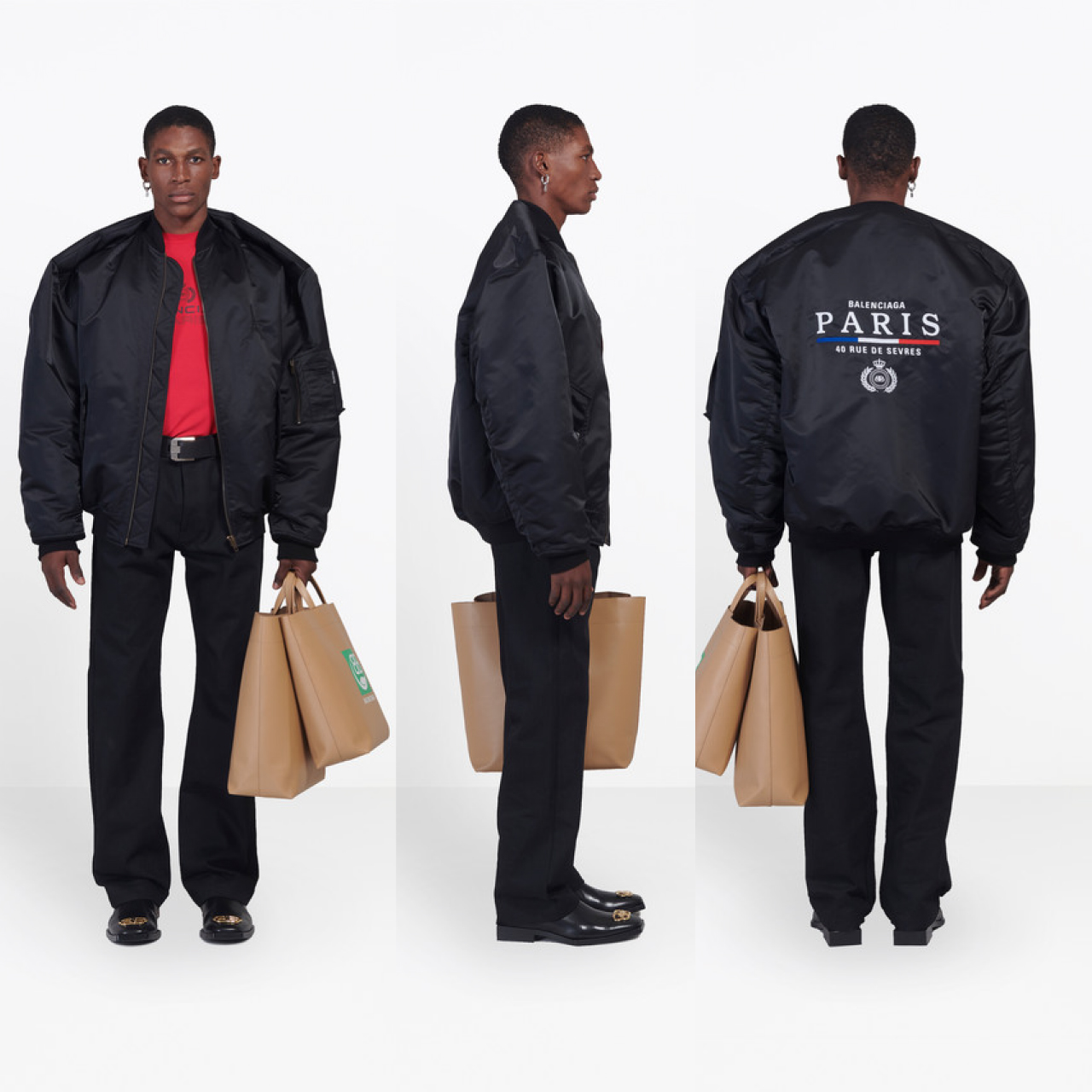 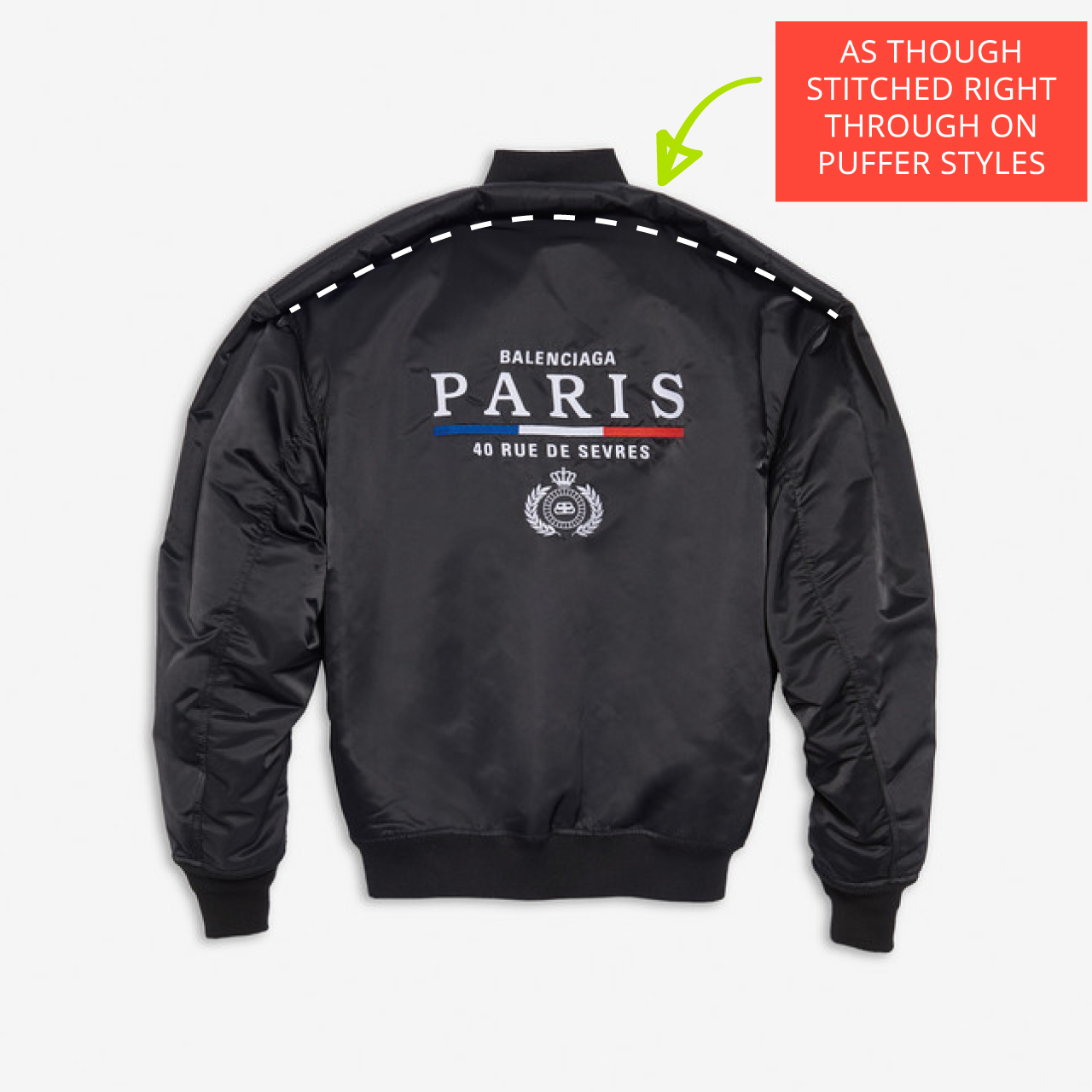 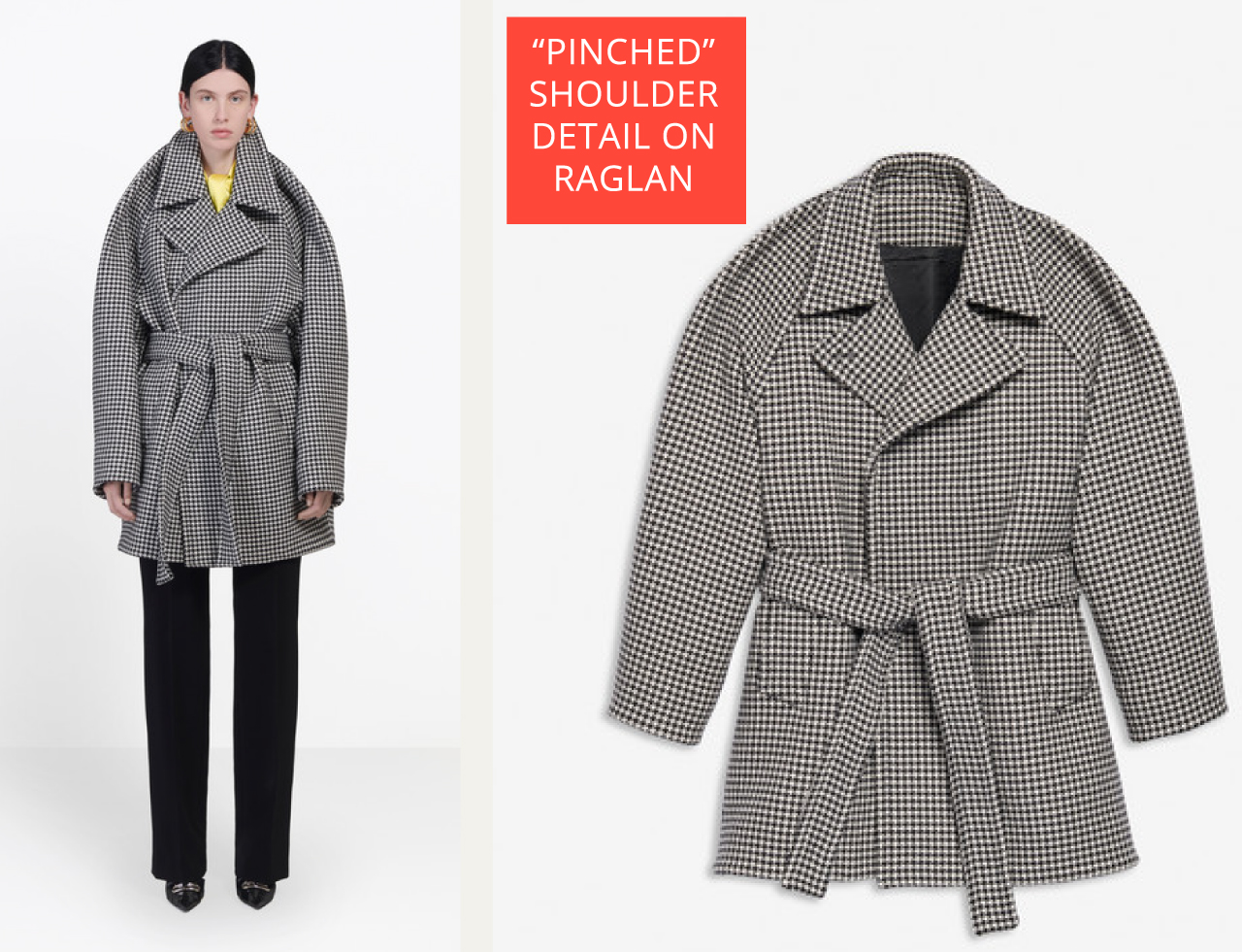 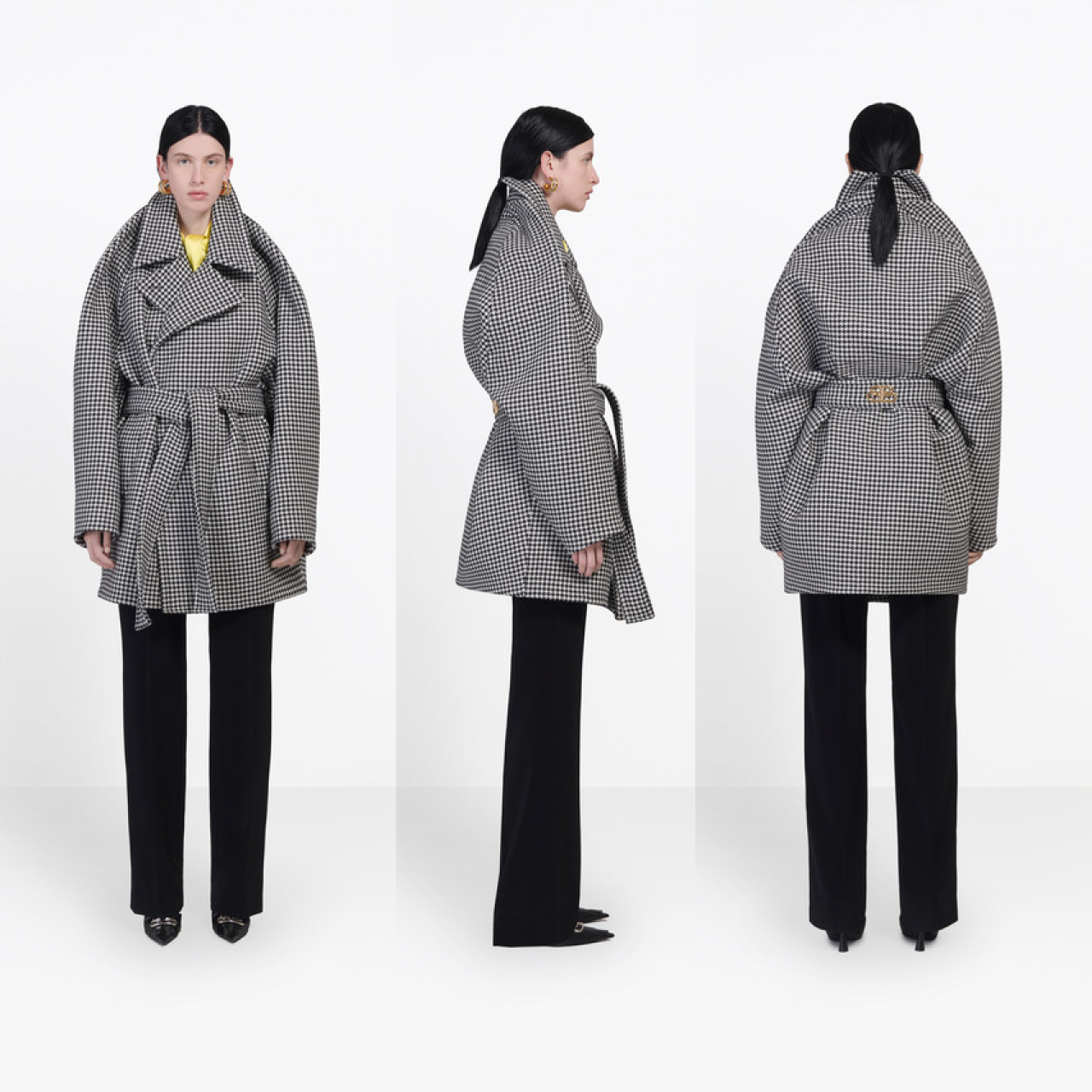 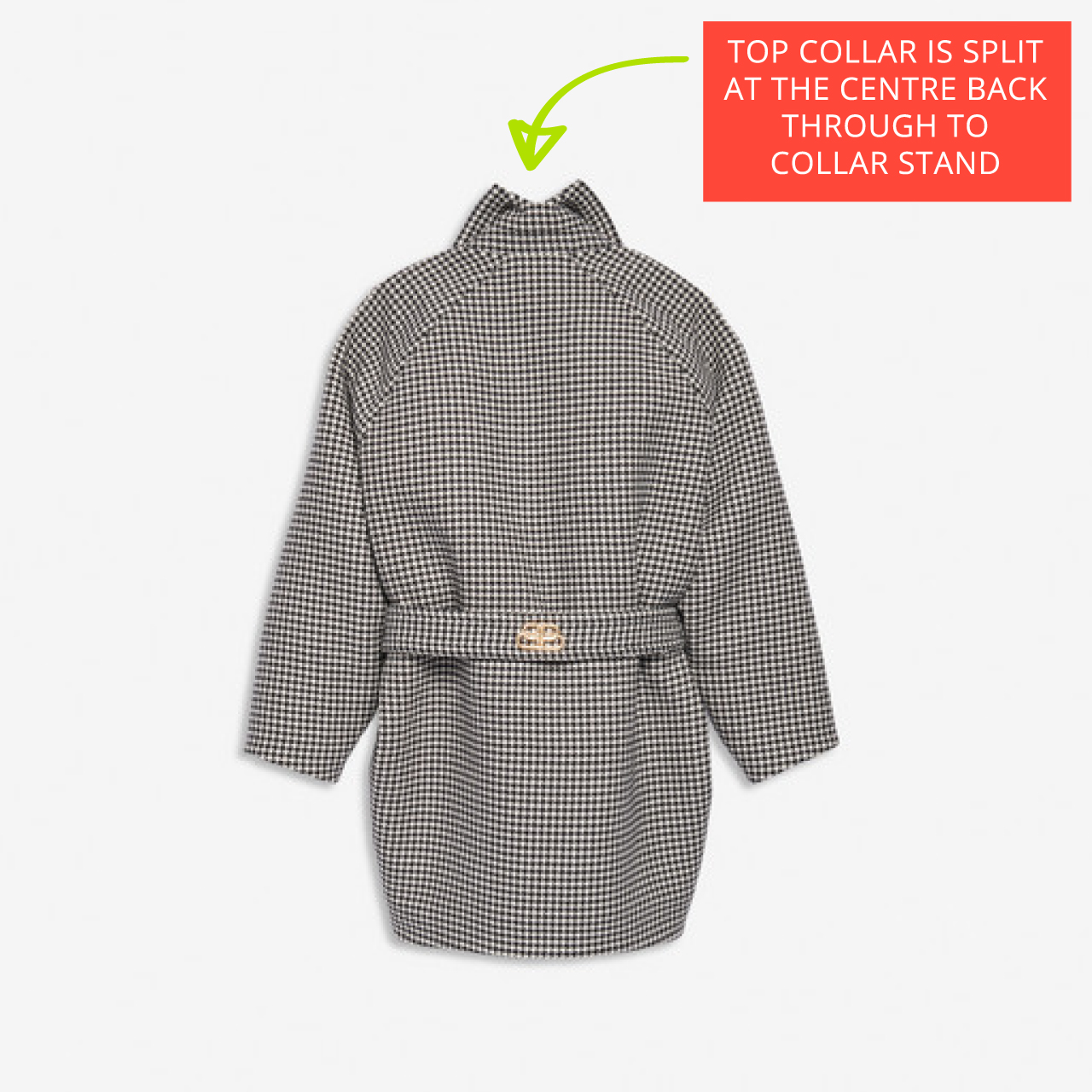 The treatment appears to be slightly different depending on the garment as well. On these images it is hard to discern if topstitching is used to join the layers together on the tailored garments; whereas on the puffer jacket and bomber styles, it looks likely that there is topstitching across the top of the shoulders between the two shoulder seams that sinks into the puffier fabric.

Consessions also need to made for the shape of other pattern pieces because of the fact that the whole silhouette is being raised. One example of this is the collar on a wrap coat. As the coat rides up, there would be tension on the collar as it is raised higher against the body and no longer sits into the hollow at the back of the neck and base of the head. To release this tension, the top collar is split into two parts, down to the collar stand. This allows the collar to settle further round to the front.

Images of pinched shoulders at Balenciaga from Balenciaga.com»