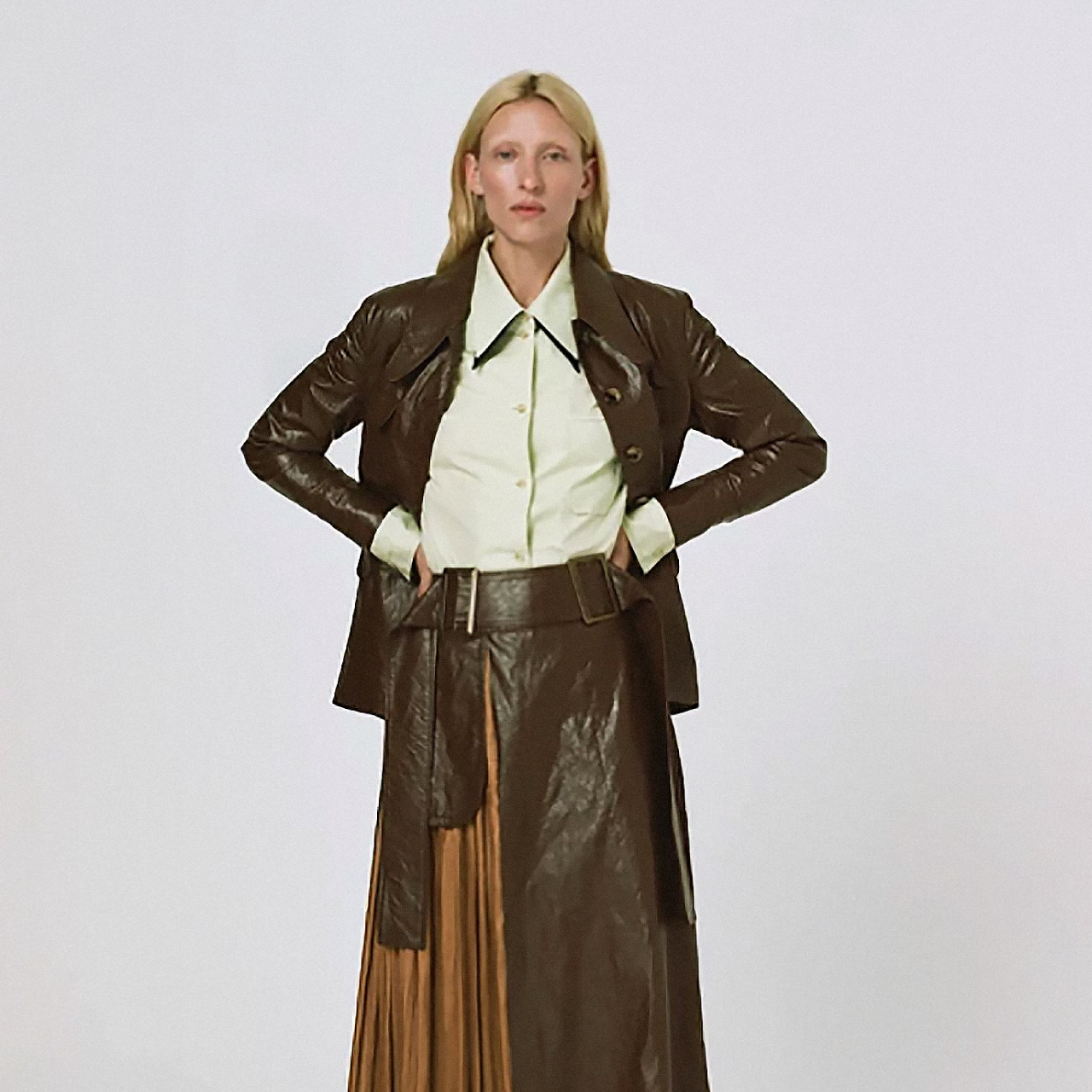 With the churn of imagery for the fashion seasons, it can be easy for the little details of the more understated garments to slip by. So often we see catwalk and lookbook images of new collections in the heat of the moment as a new season is revealed without any follow-through. Did the garment make it into production? Did the design have to be changed from sample to shop floor (or direct-to-consumer website)?

So here we have taken a look at the details on just one garment. Shot as a layered look as part of the Pre Fall 2019 lookbook, this Rejina Pyo pistachio shirt in Japanese cotton had some details hidden that could only be visible in the product shots.

The ‘Rory Shirt‘, as it is named on the Rejina Pyo website, features a double layer collar, where the second collar layer is cut in a contrast colour, with extra long points, like a graphic shadow effect. Other details to note include the lower yoke line which possibly could include some bust shaping – though because of the boxy fit it is possible this shaping isn’t necessary or required to be very pronounced in smaller sizes. Though in larger sizes, this could possibly be a point to facilitate some bust shaping along with a separate bust dart.

The top of the patch pocket has also been neatly lined up with this lower yoke line, and the front of the garment has been kept clean and supported with the use of a facing rather than a placket. Note also that the topstitching is kept from being distracting by using a matching colour, and is sewn at the same distance on the yoke, down the centre front and around the patch pocket.

The boxy fit is made more flexible by the tab and button details that are only visible from the back of the garment. This would allow the wearer to adjust the fit as needed. Depending on the weight of the fabric, note that placing buttons in the middle of the fabric like this may require a little something to stop the button shank from ripping right through the cotton. For example, sometimes little circles of the self fabric may be fused and placed behind the button so that the thread shank has something stable to grip onto. 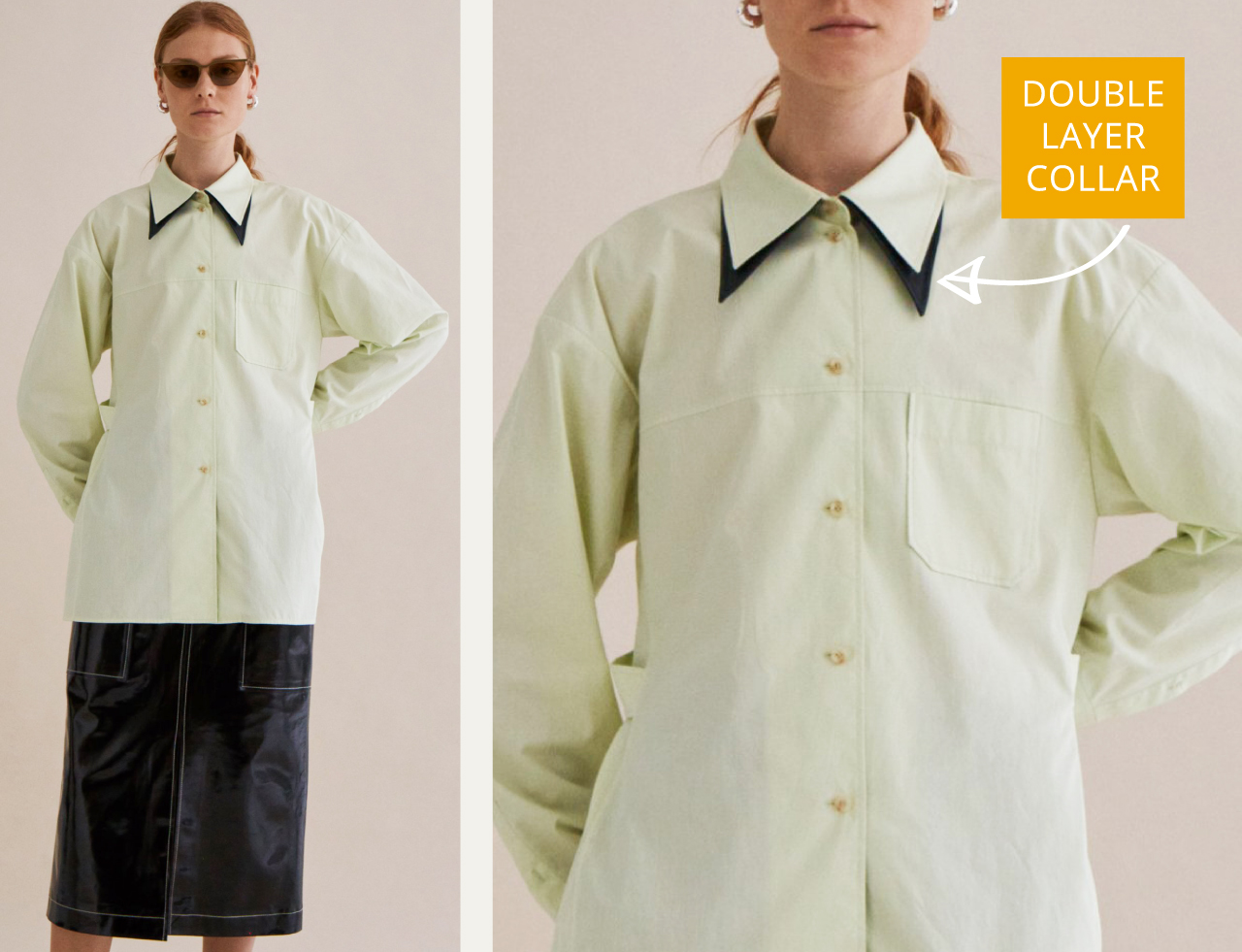 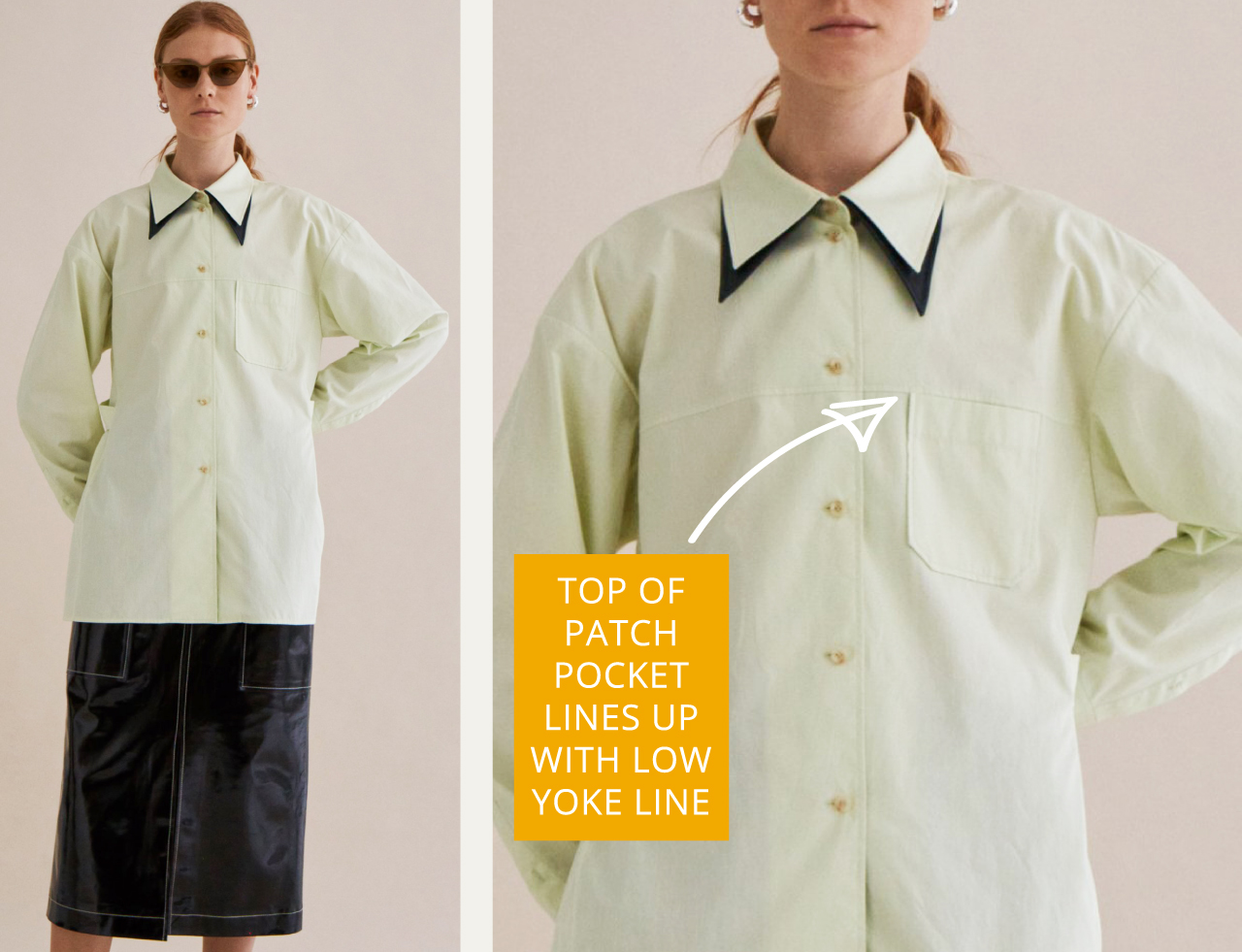 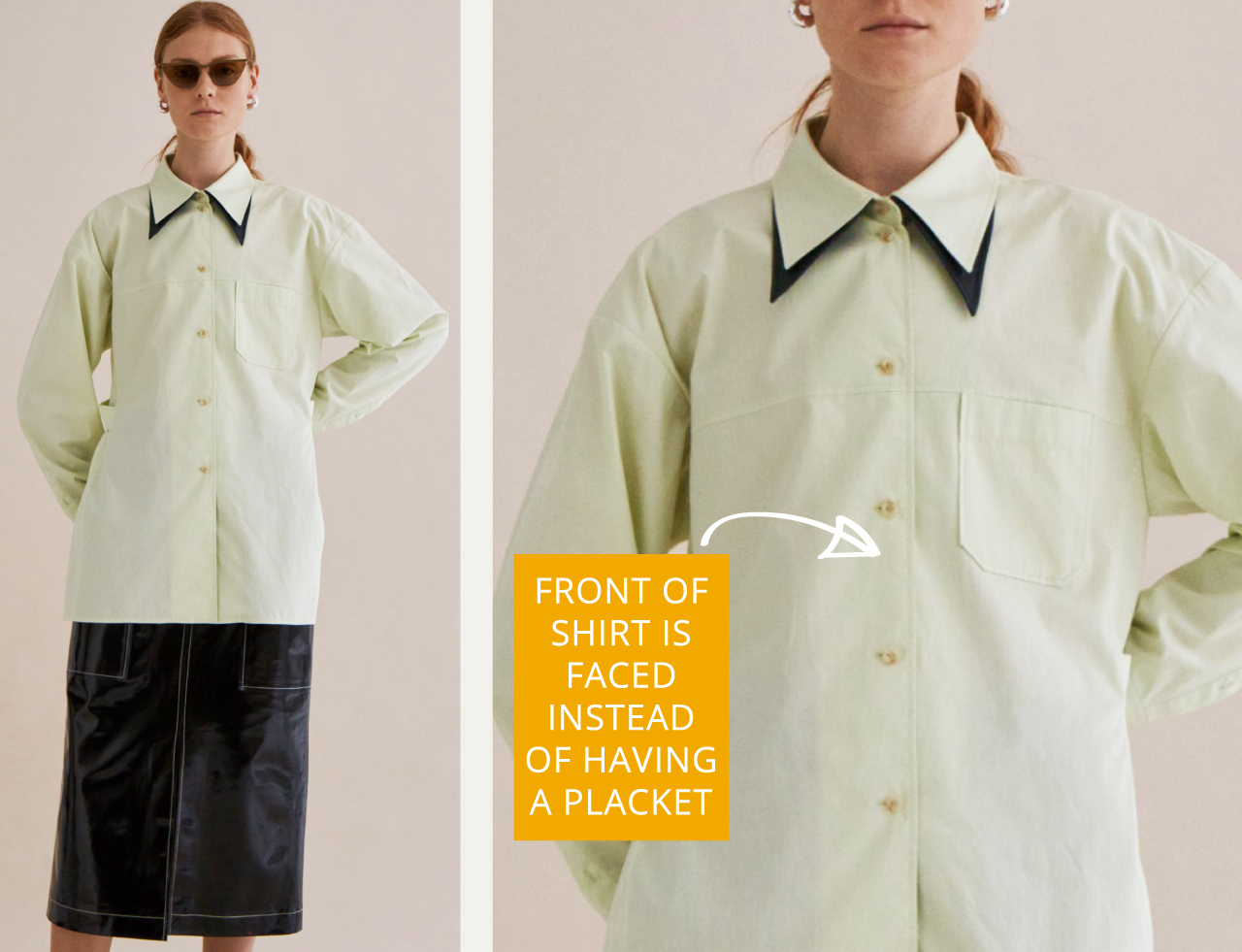 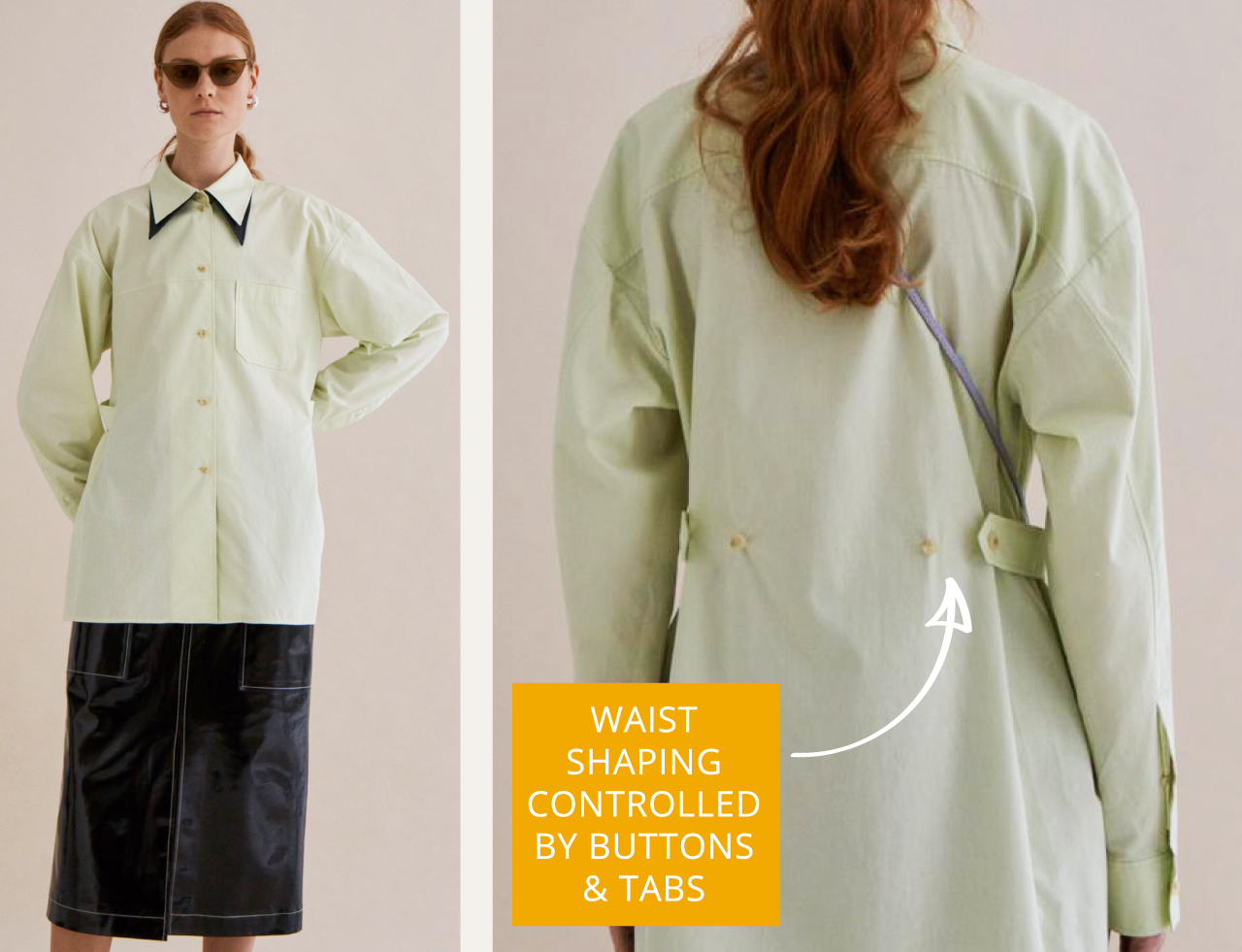 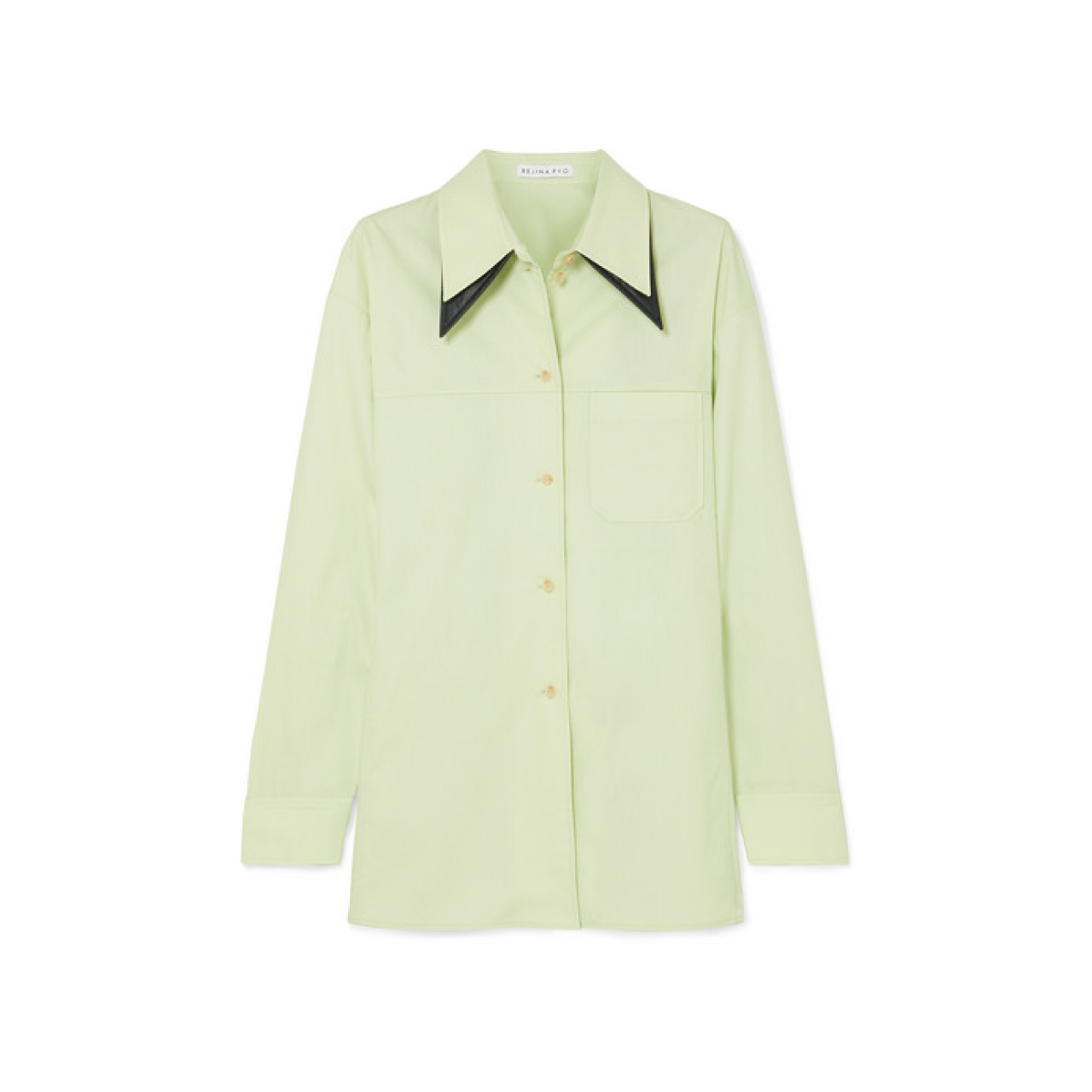 Images from rejinapyo.com» and net-a-porter.com»

This Rejina Pyo pistachio shirt or ‘Rory Shirt’ can be viewed on rejinapyo.com»