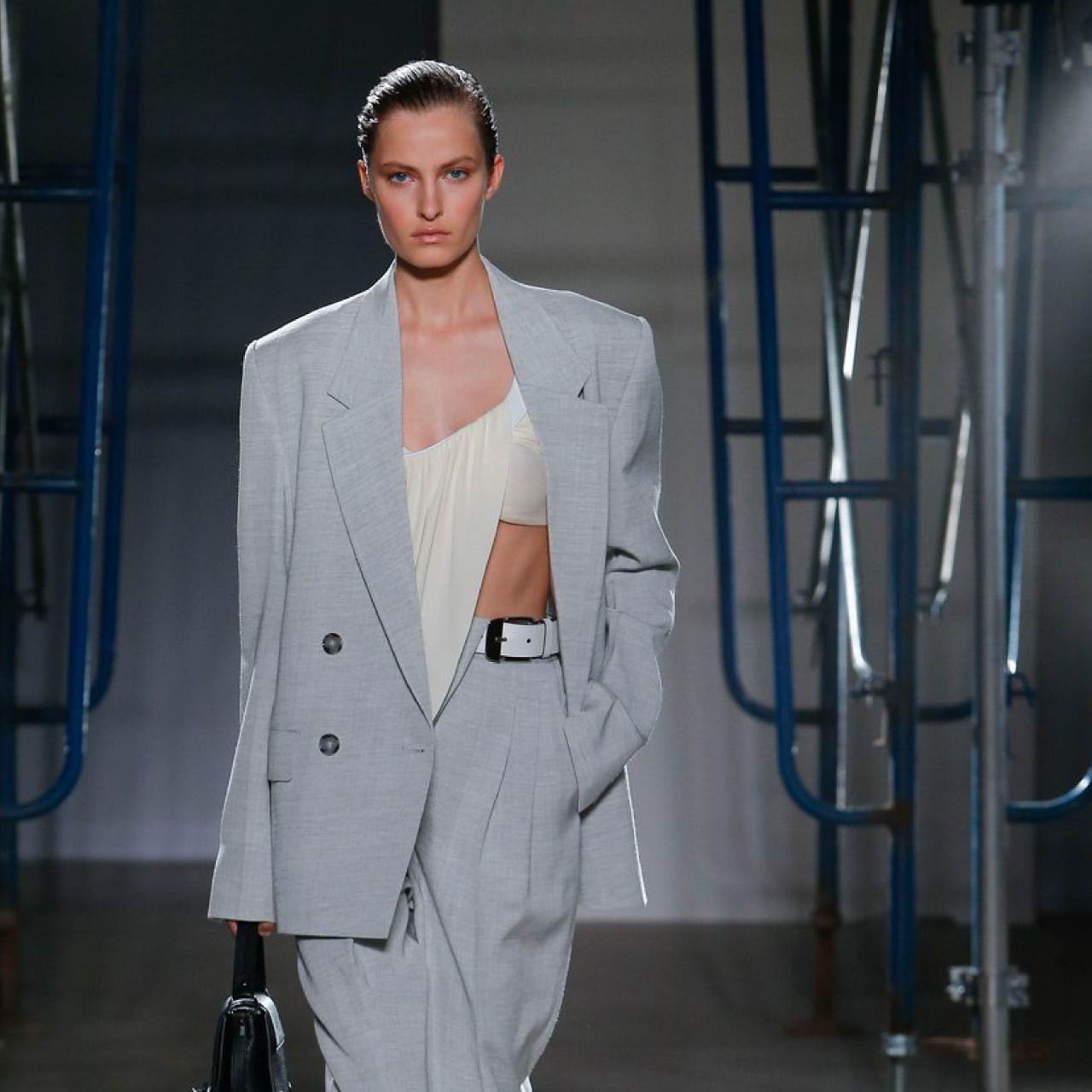 It’s one of those details that you just might not really think about until you notice it, but a crisply squared-off hem on a tailored jacket is a clean detail when applied to either menswear or womenswear. Tailored jacket hems are one of the many details that can be adjusted on single-breasted or double-breasted styles to influence the overall feel of the look and can be made into sharp corners, or soft curves, or any variation in between.

The convention for tailored jacket hems appears to generally be for double-breasted suit jackets to be cut as clean square corners at the bottom. Single-breasted suit jackets tend to be cut so that the front edge will angle slightly away from the buttons to the hemline, and then the corner of the hem itself is often rounded off to varying degrees depending on the design of the jacket.

In the images below, you can see how Kim Jones has used these conventions in the Dior Spring-Summer 2020 menswear collection. 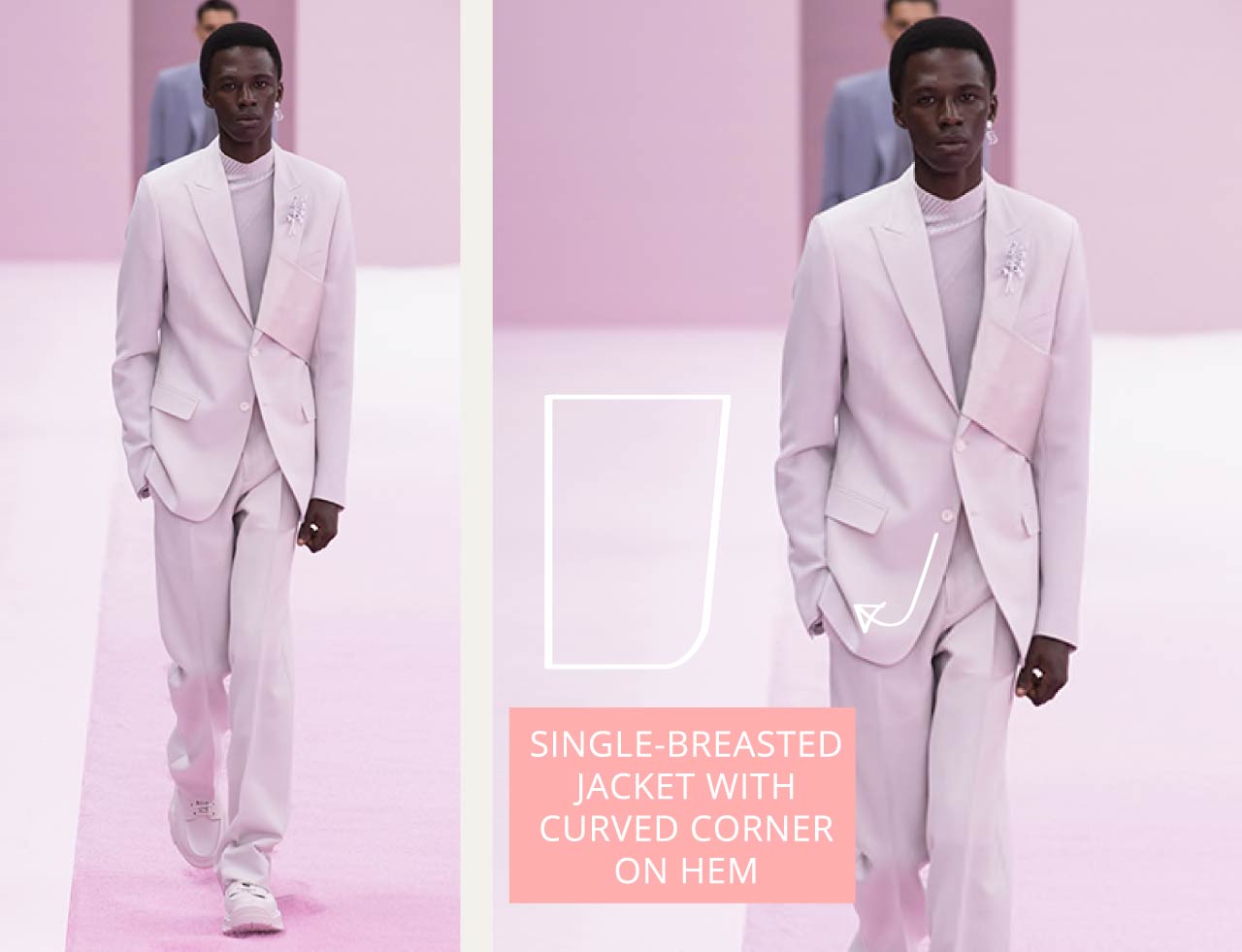 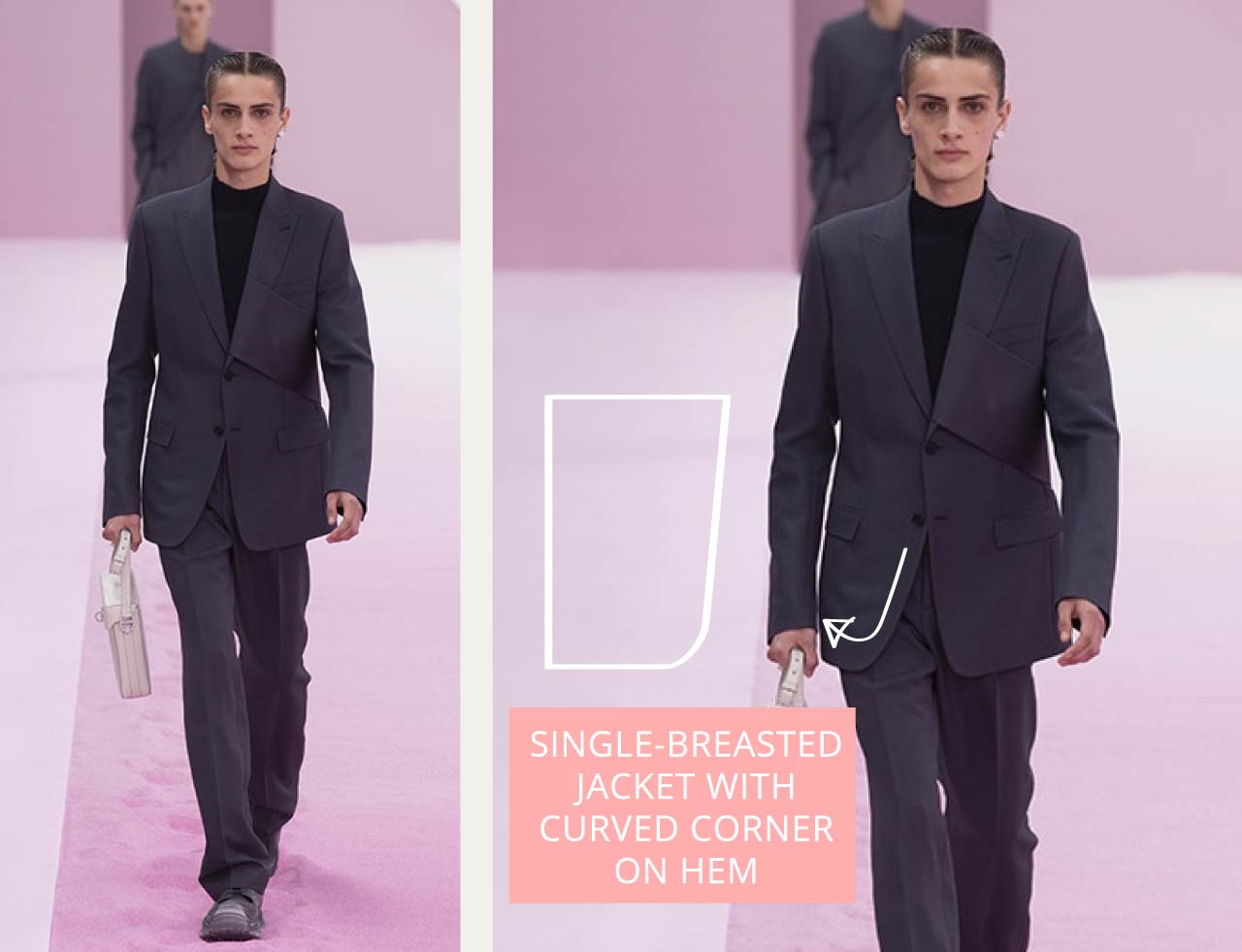 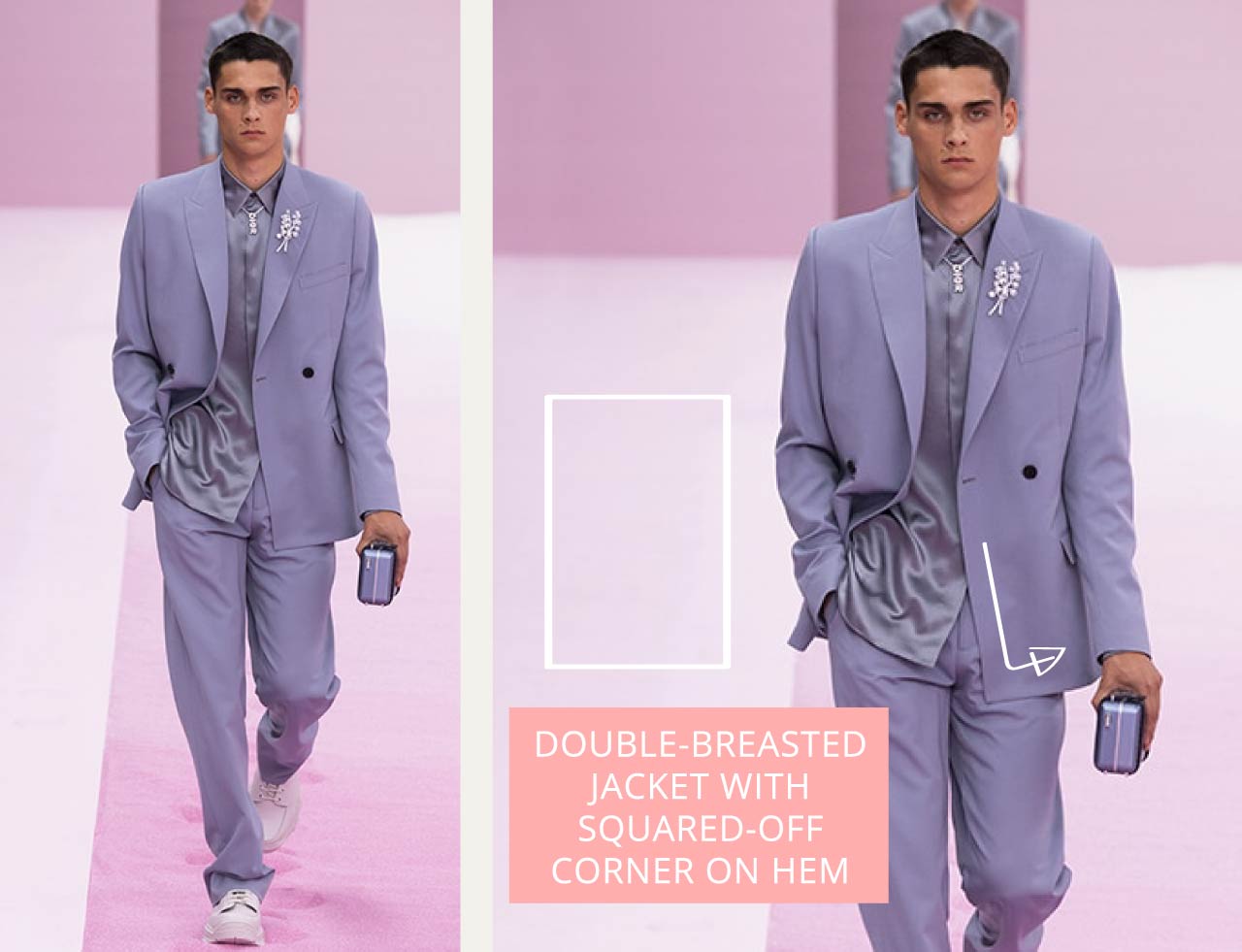 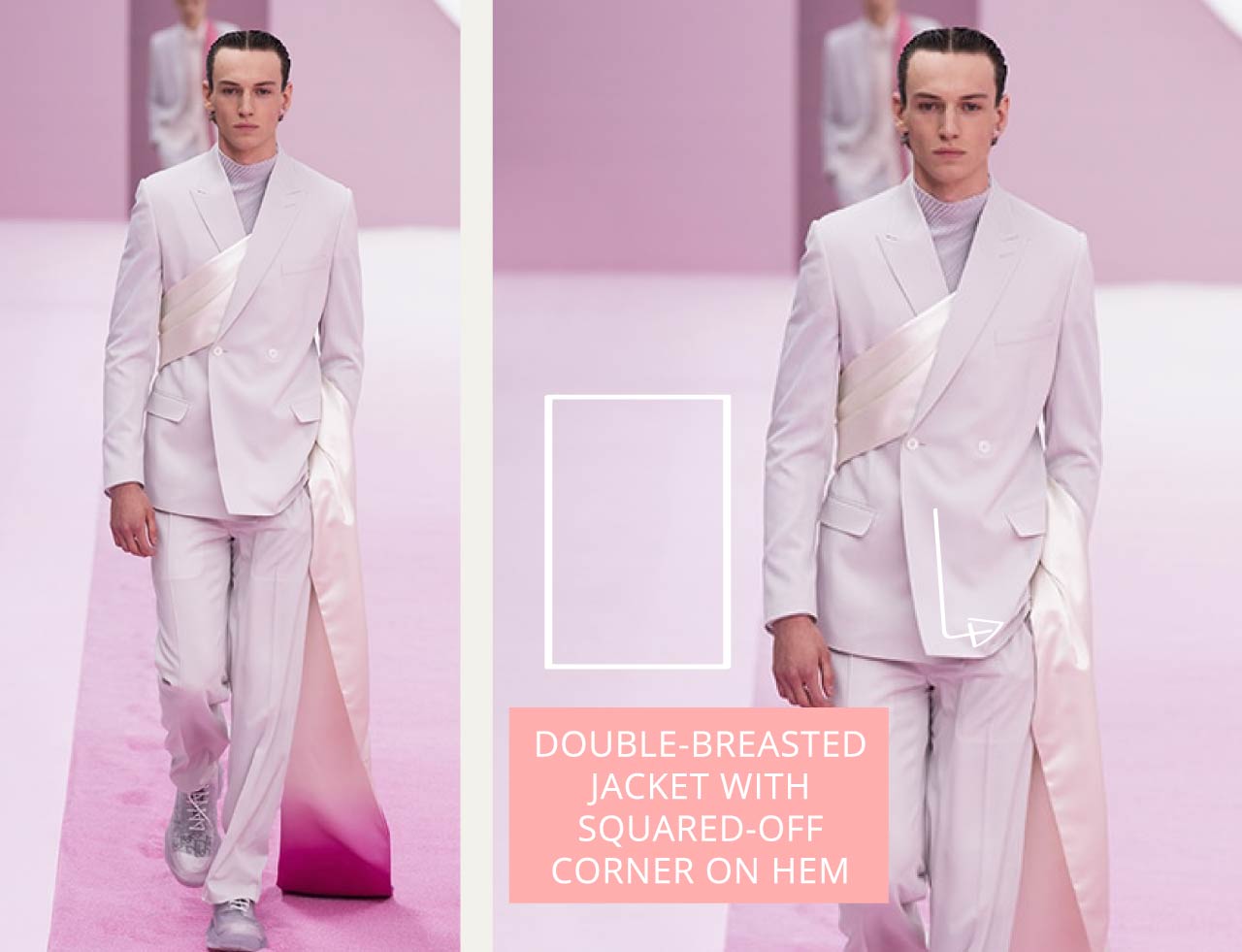 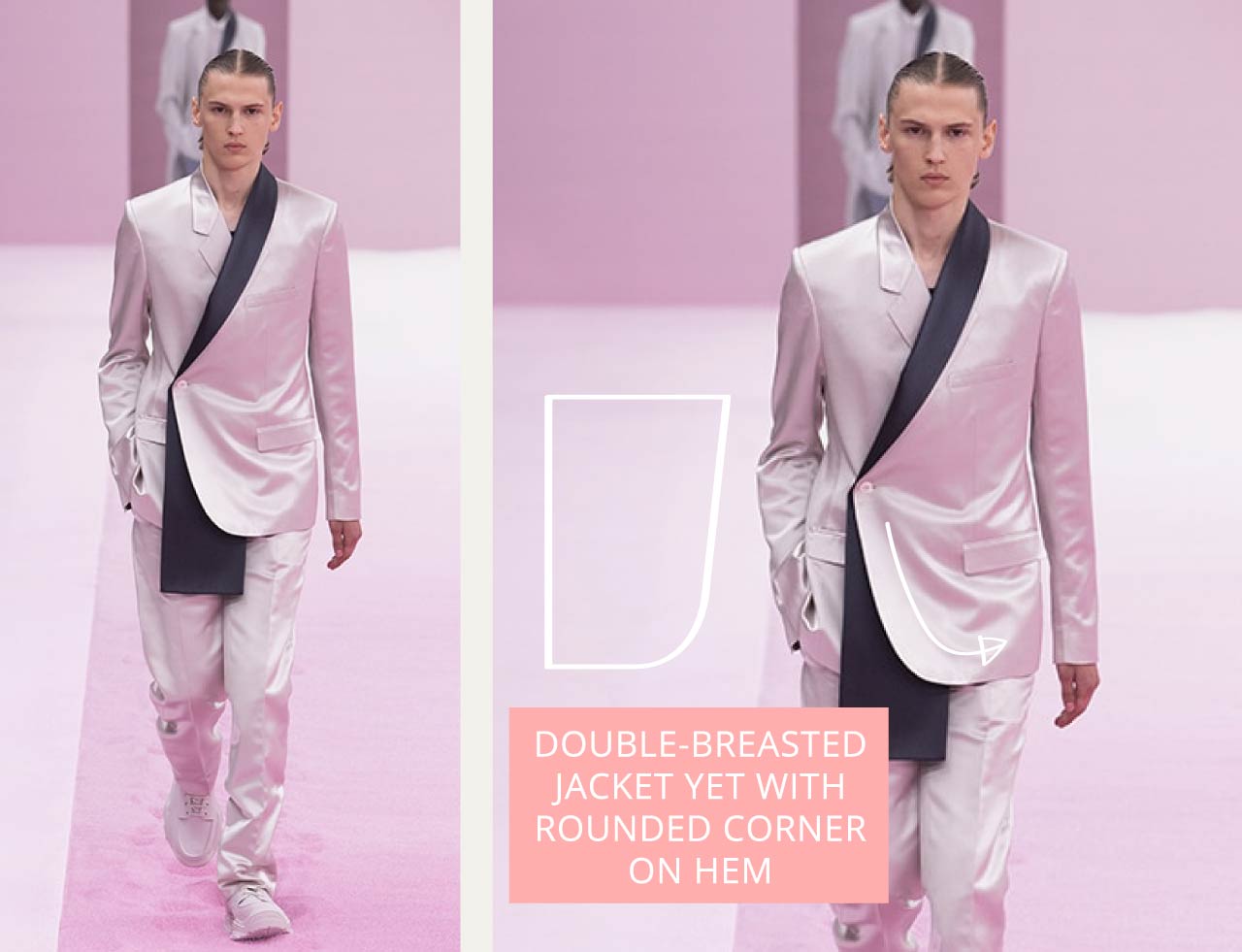 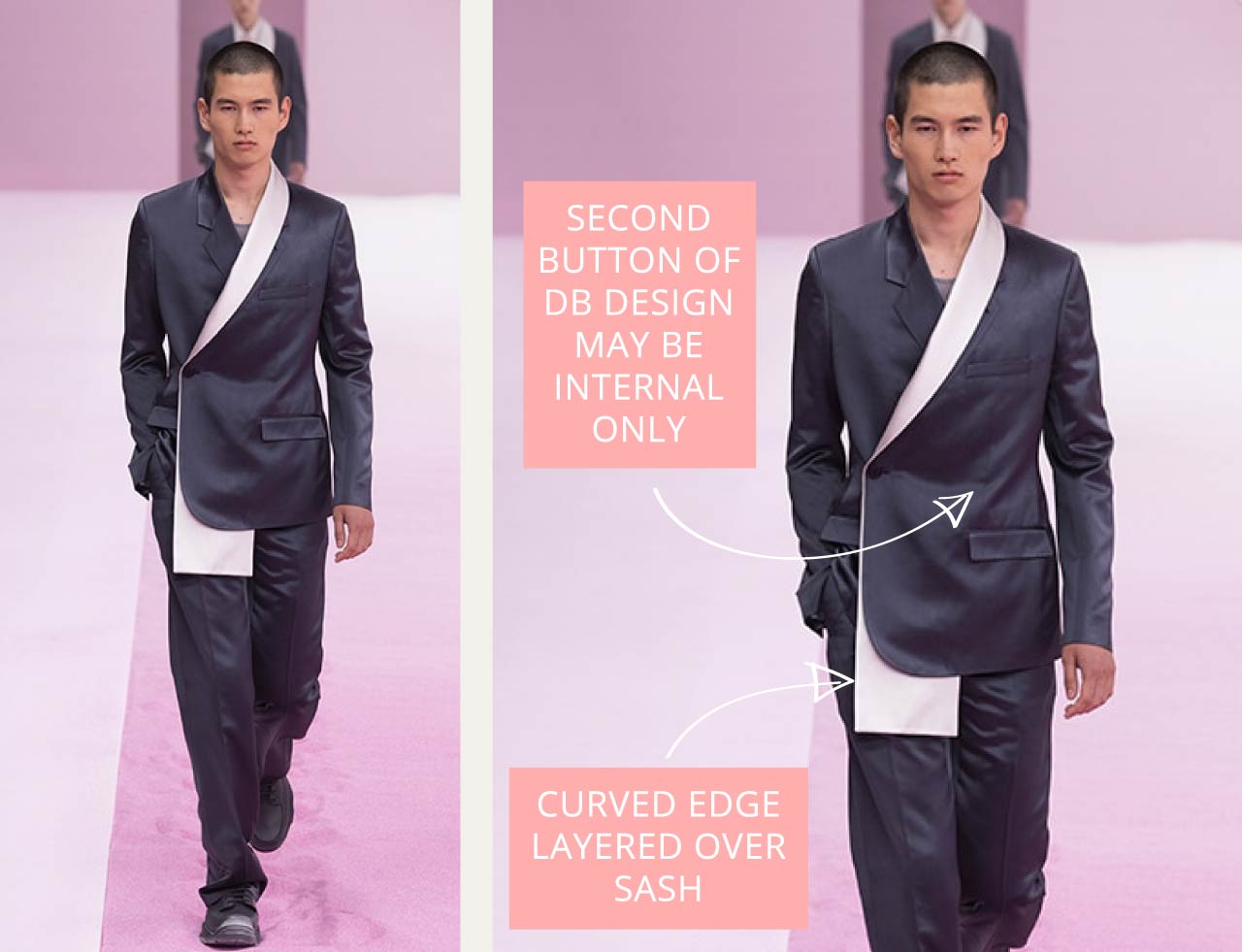 Of course, there are no hard and fast rules when you want to mix up the combinations, but there are some practical considerations to think about. For a start, if you have clean straight corners on a suit jacket, then ideally you want to avoid the hems overlapping at strange angles when the jacket is done up. By design, the double-breasted jacket has multiple anchor points for the closure, often done up with one visible external button, and another internal button which holds the underlayer of the jacket in place. Having the two buttons as anchor points, in this case, makes it easy to keep the front edges aligned.

In the Dior Spring-Summer 2020 examples, one of the double-breasted styles is cut with a very rounded corner. However, any potential problem of mismatched overlaps has been overcome in this situation by layering in a sash.

On a single-breasted jacket, you can still have a crisp front corner of course, but then the decision becomes about whether you cut the front of the jacket absolutely perpendicular down from bottom button to hem, or if you angle the front edge away.

This sort of style choice for the designer is always also going to be a balancing act between other details of the tailoring, and other considerations about the proportions of the jacket. For example in the images below, you can see how the breakpoint of the jackets for Proenza Schouler vs. Prada are very different and varies to tie into the overall cut and sizing of the jackets.

The Proenza Schouler jackets are cut oversized, with a low breakpoint that is in line with the bottom row of the buttons. This fits with the whole proportion of the jacket – the fronts are cut wider so that the shoulder pads extend past the wearer’s shoulders, and the sleeves hang long over the hands, but the hem of the jacket feels in proportion because the long sleeves and the hem of the body are in line with each other. (As an aside, buttoning the lower two of the four buttons promotes a more relaxed feel to the double-breasted design and is often known as the Kent style).

In contrast, the Prada jackets look more cropped. The lapel breakpoint is in line with the top row of buttons, and the shoulder is more softly fitted to the natural shoulder. In this case, the jackets themselves also look more cropped because they are layered in with longer-length tunics. Again the tailored jacket hems on these double-breasted Prada suit jackets have been cut into sharp corners. 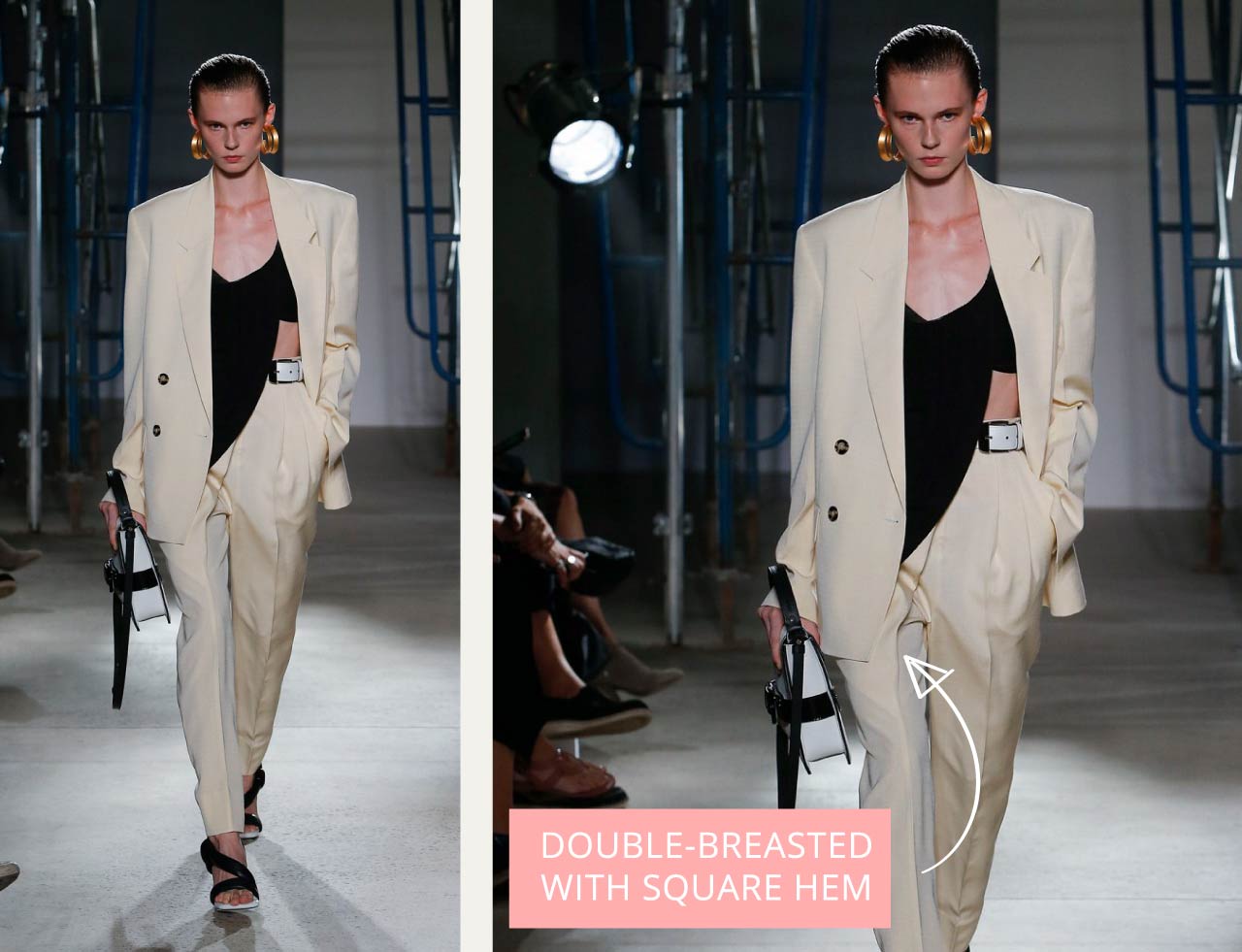 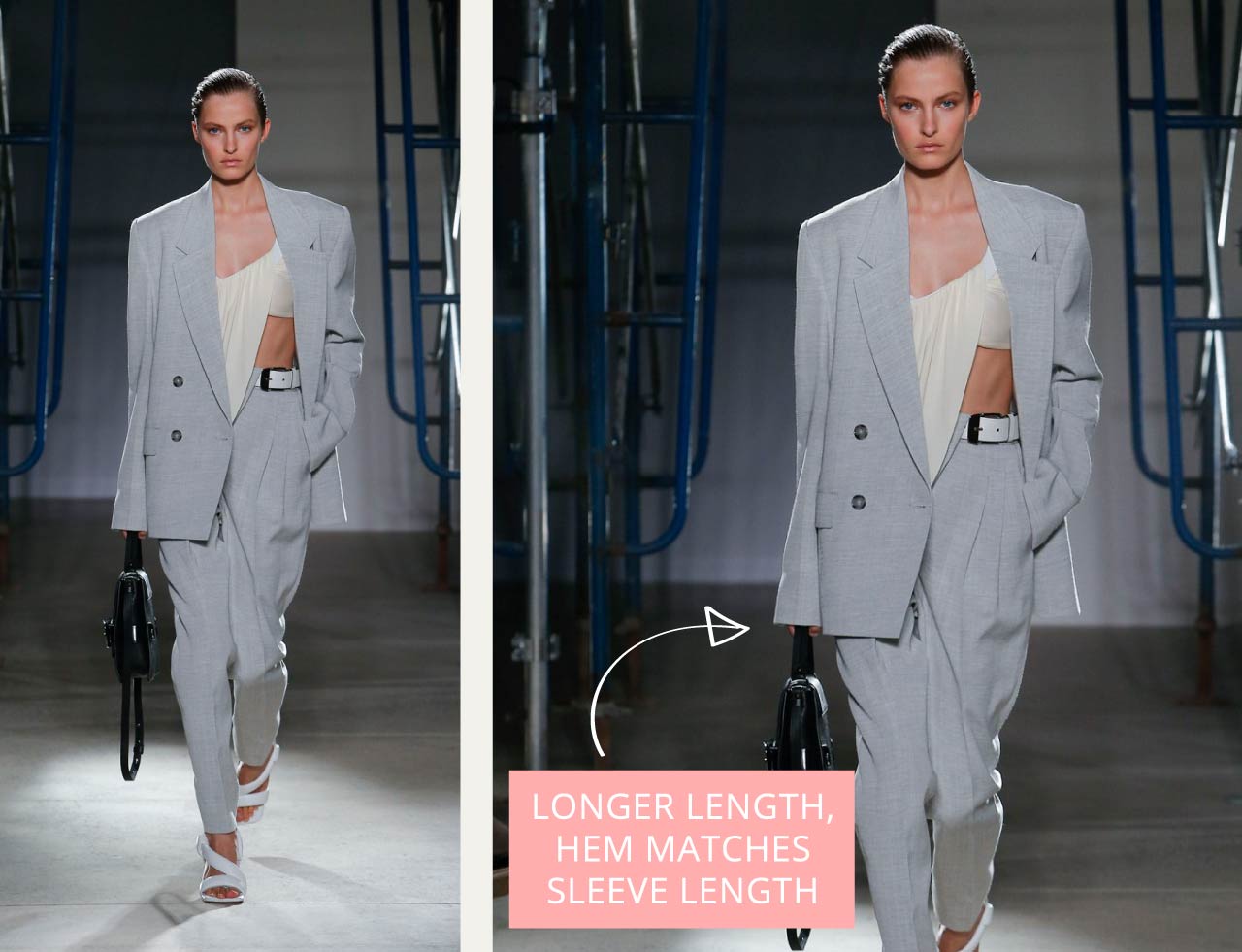 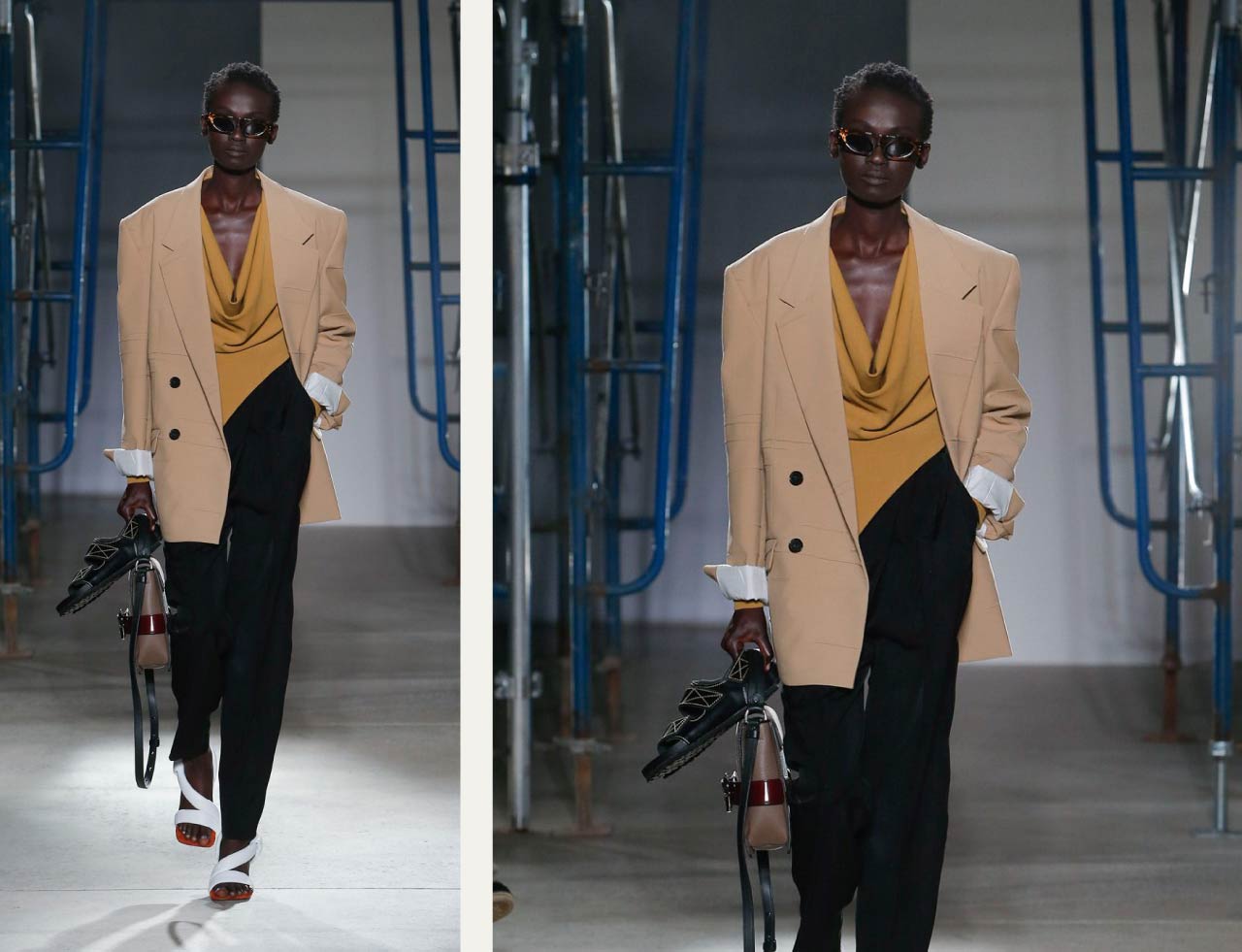 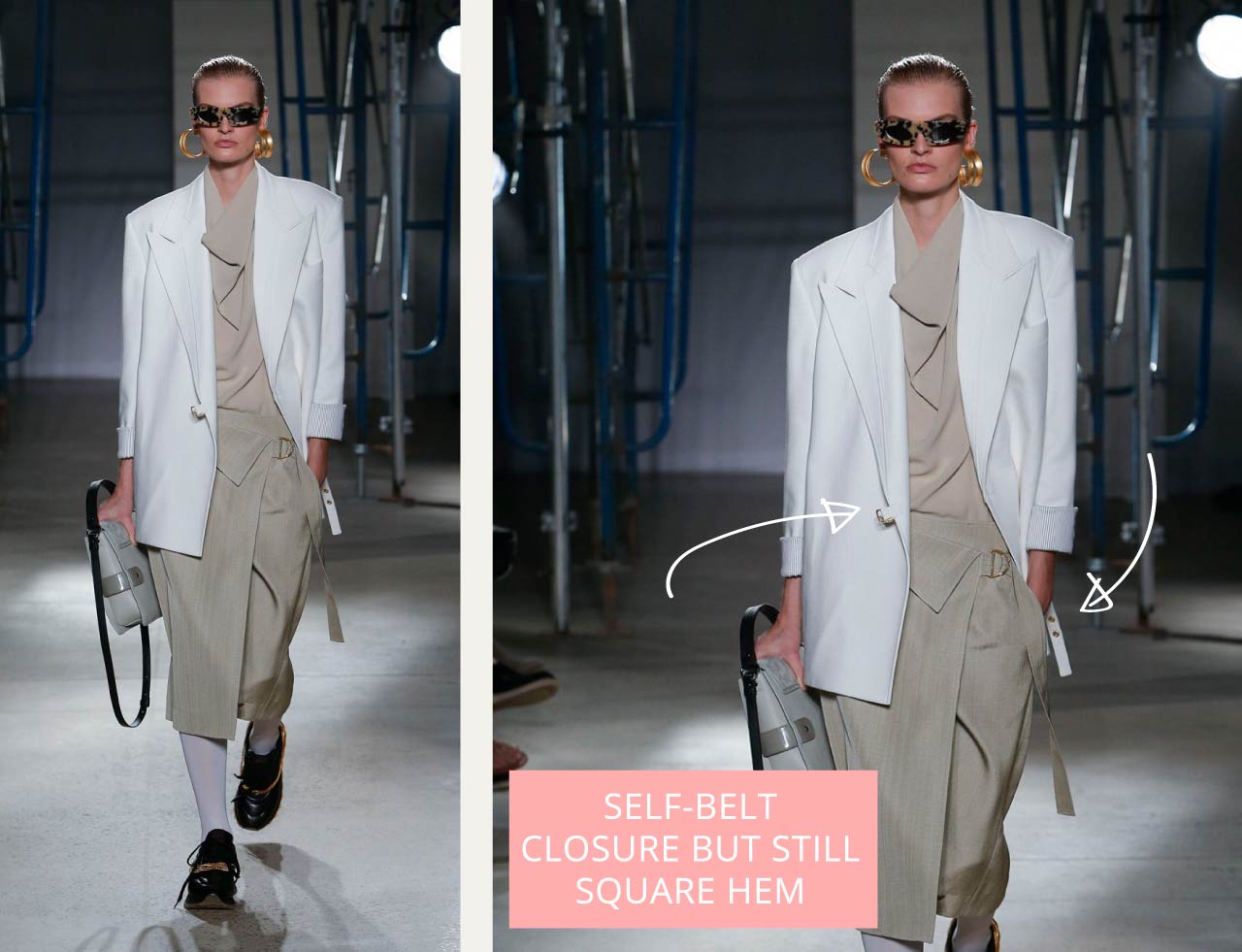 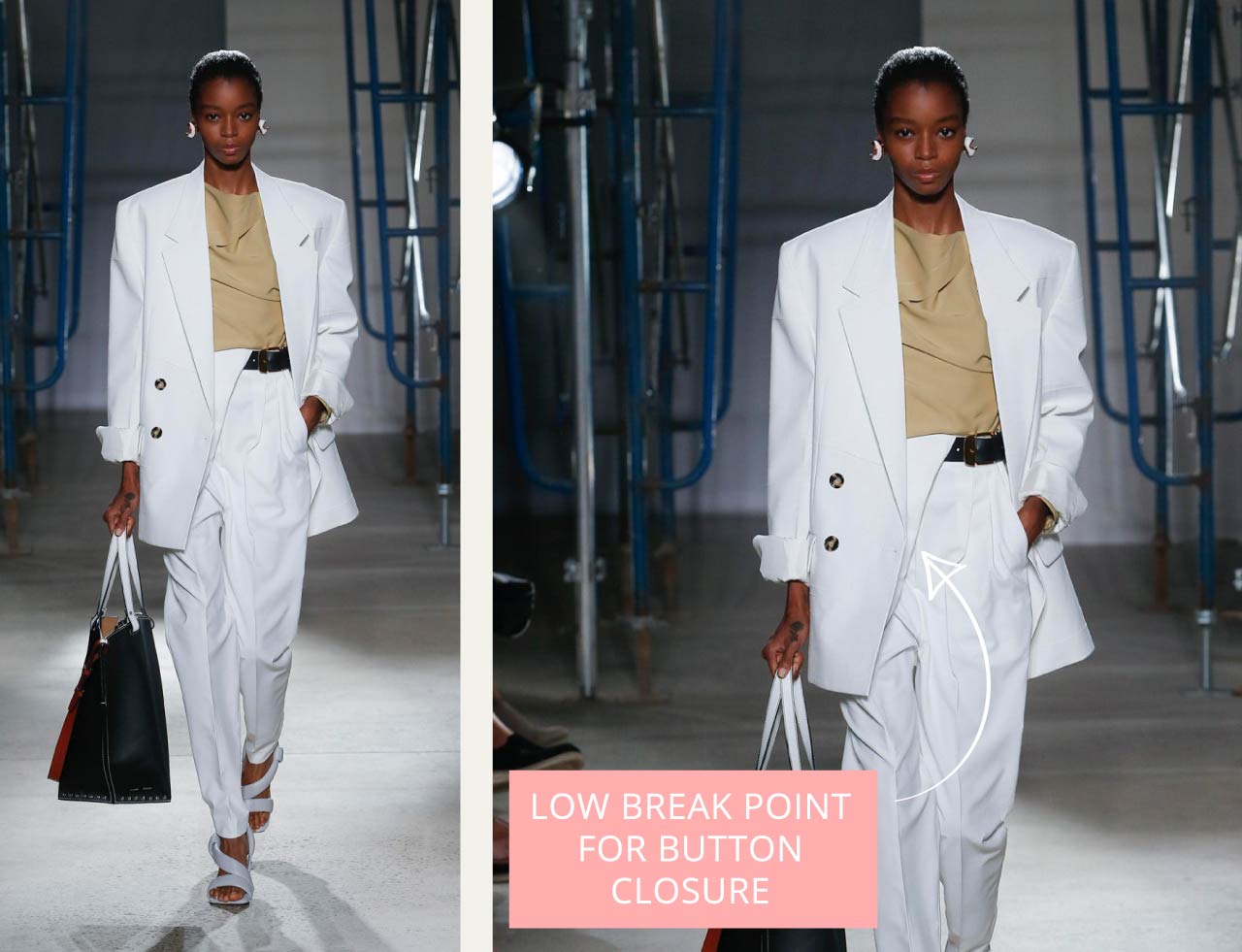 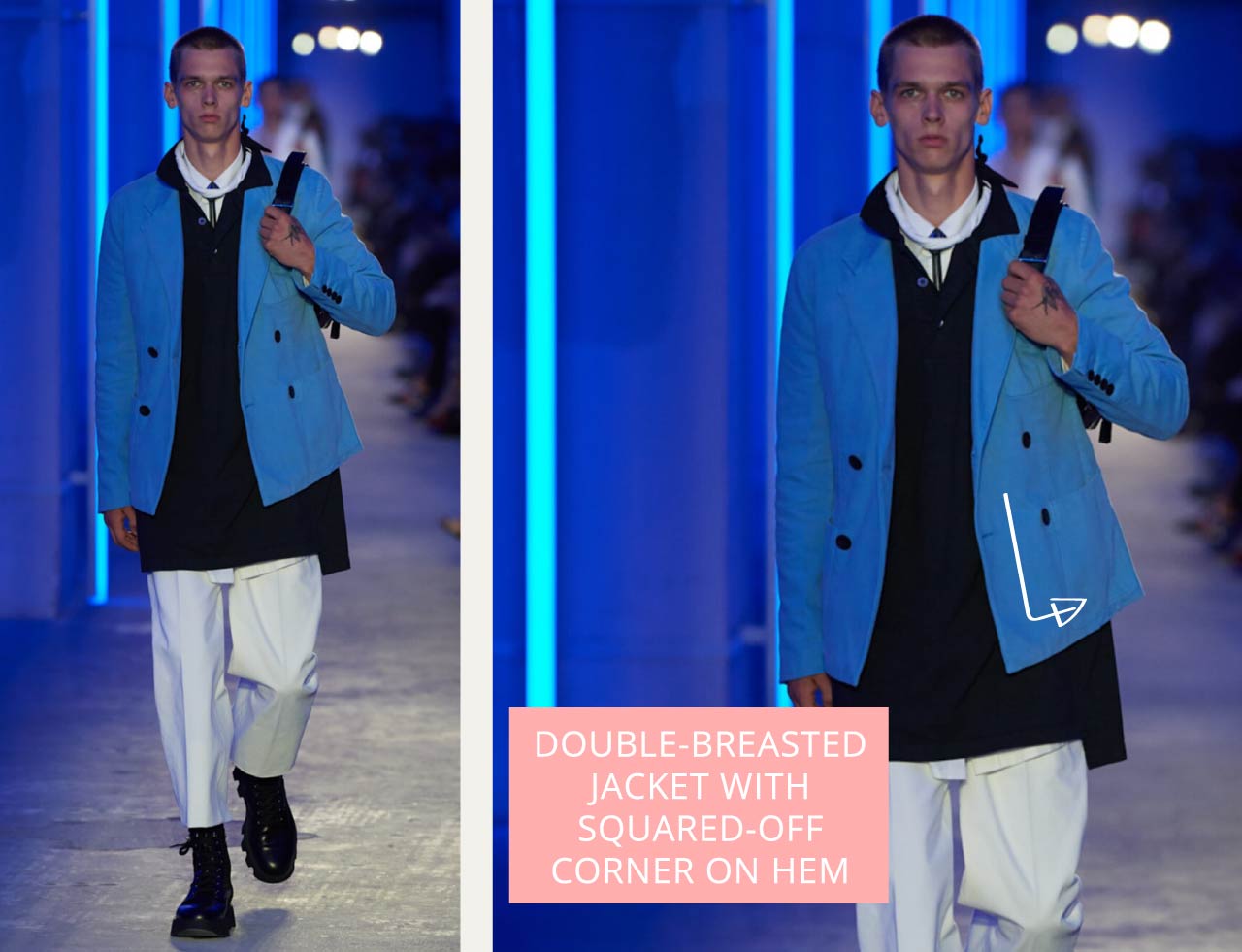 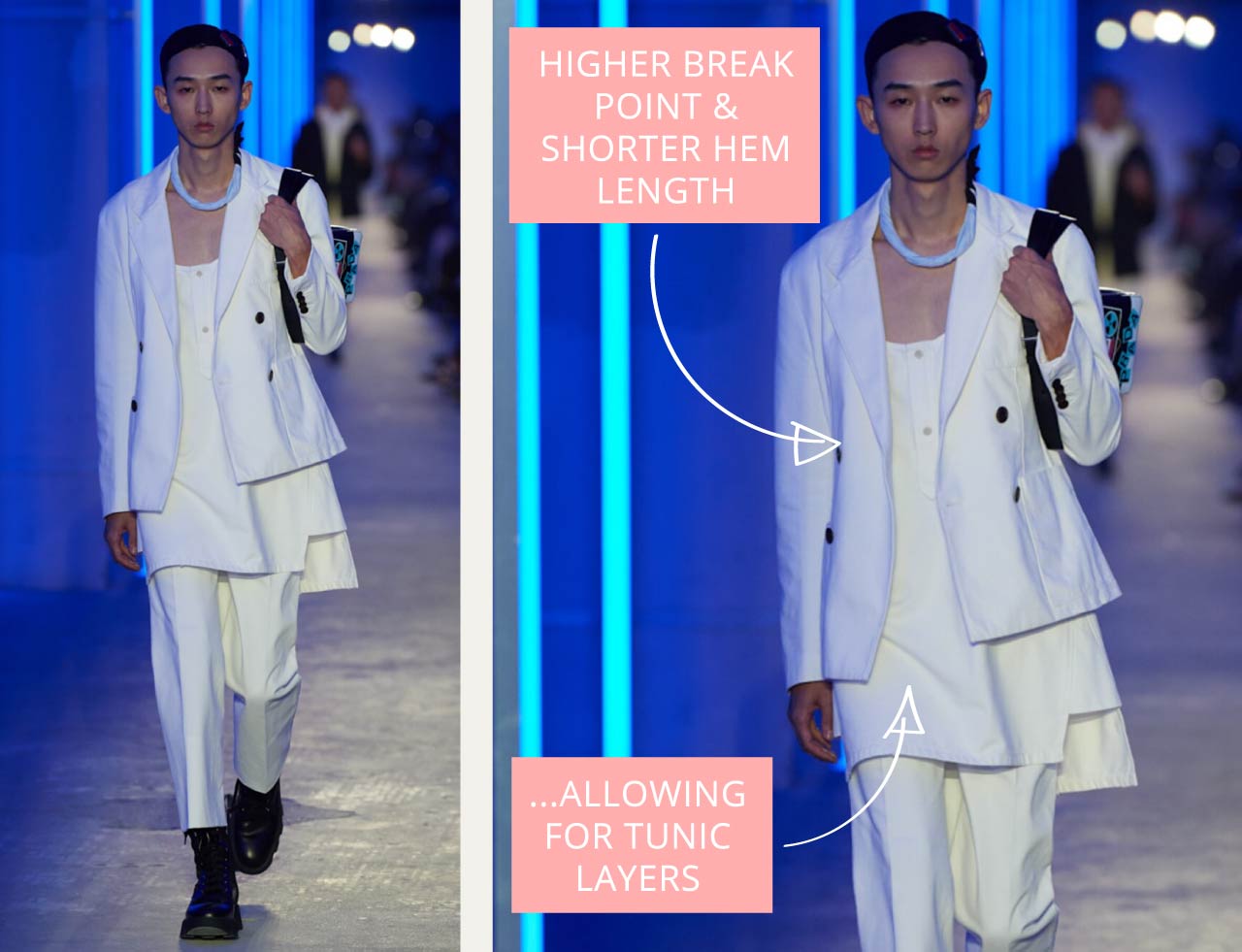 It also frees up the rules when there is no closure, or at least no visible closure, on the jackets. In the Ami Spring-Sumer 2020 show, the jackets appear to be worn loose and open with no obvious closure. In these examples, the corners don’t appear to be brutally sharp, but instead, appear to be just very slightly rounded on the corners. 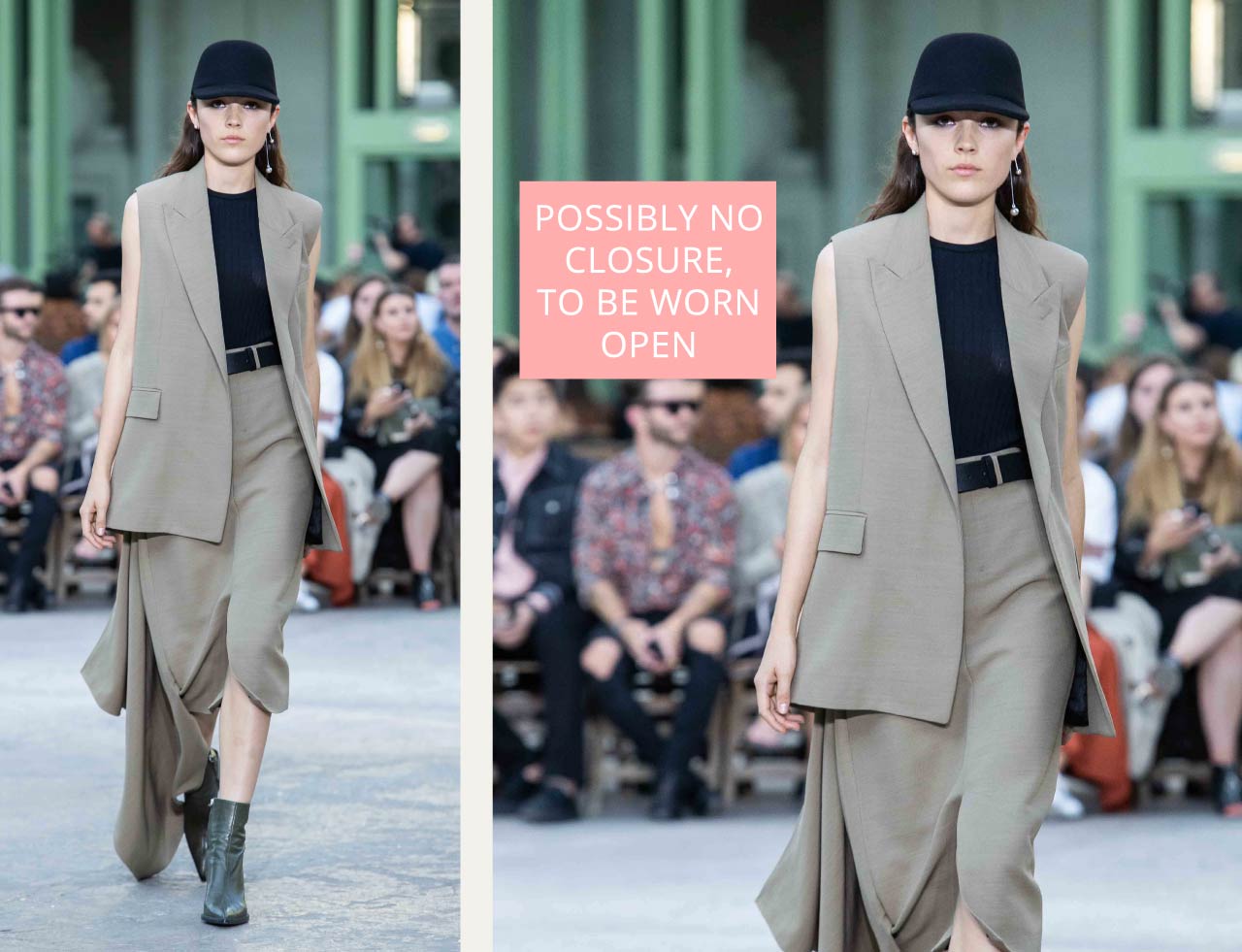 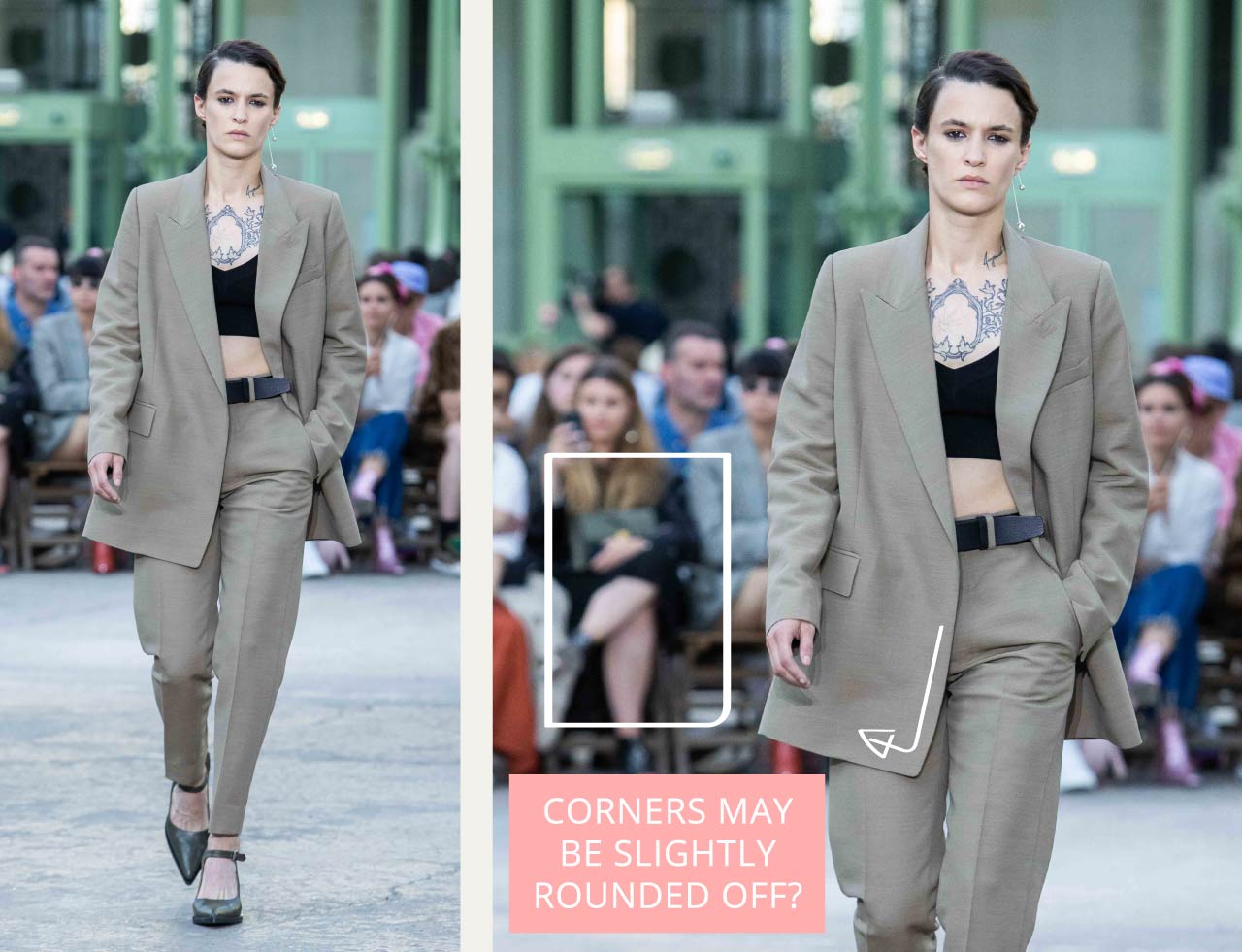 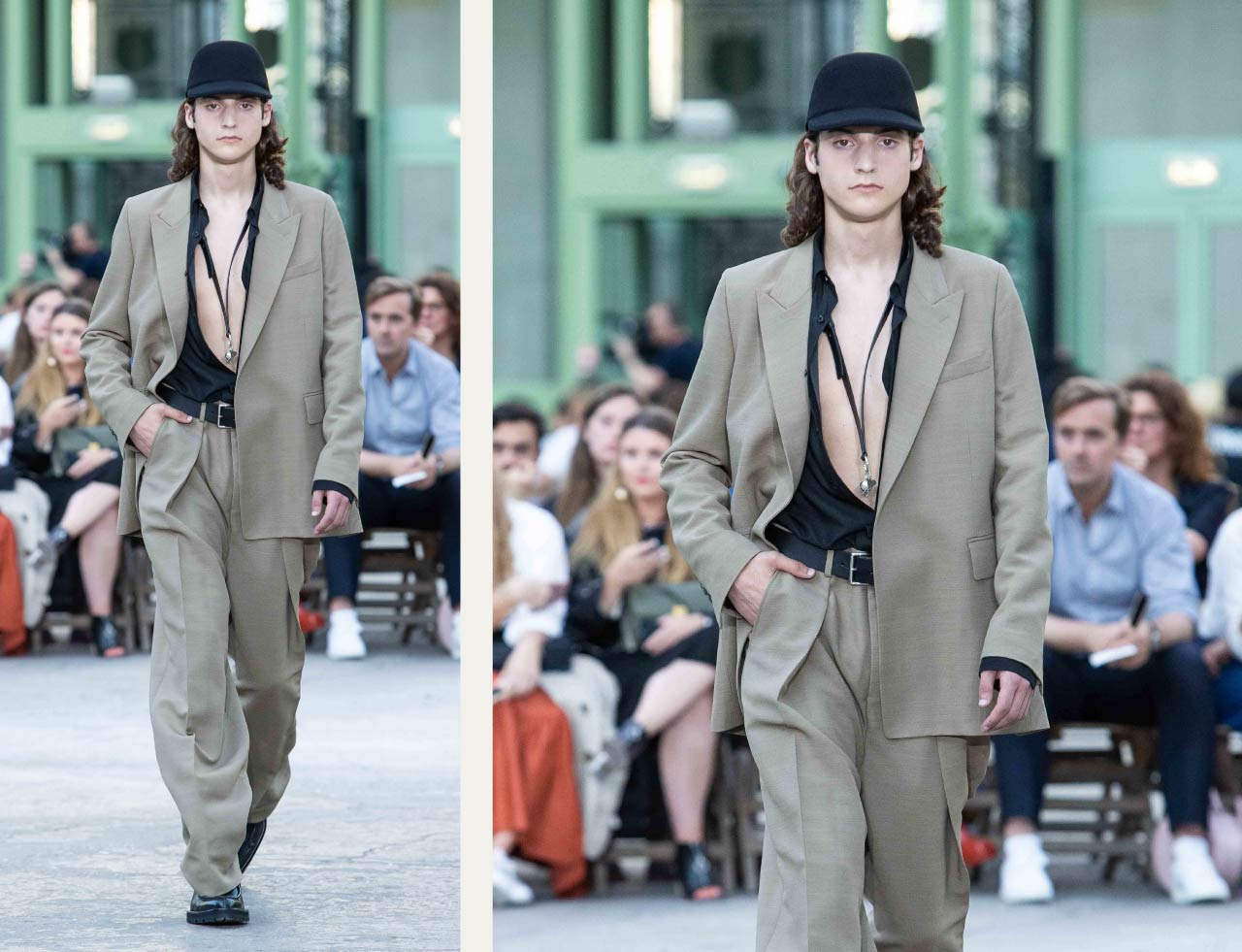