The Rule of Thirds Applied to JW Anderson

The Rule of Thirds Applied to JW Anderson 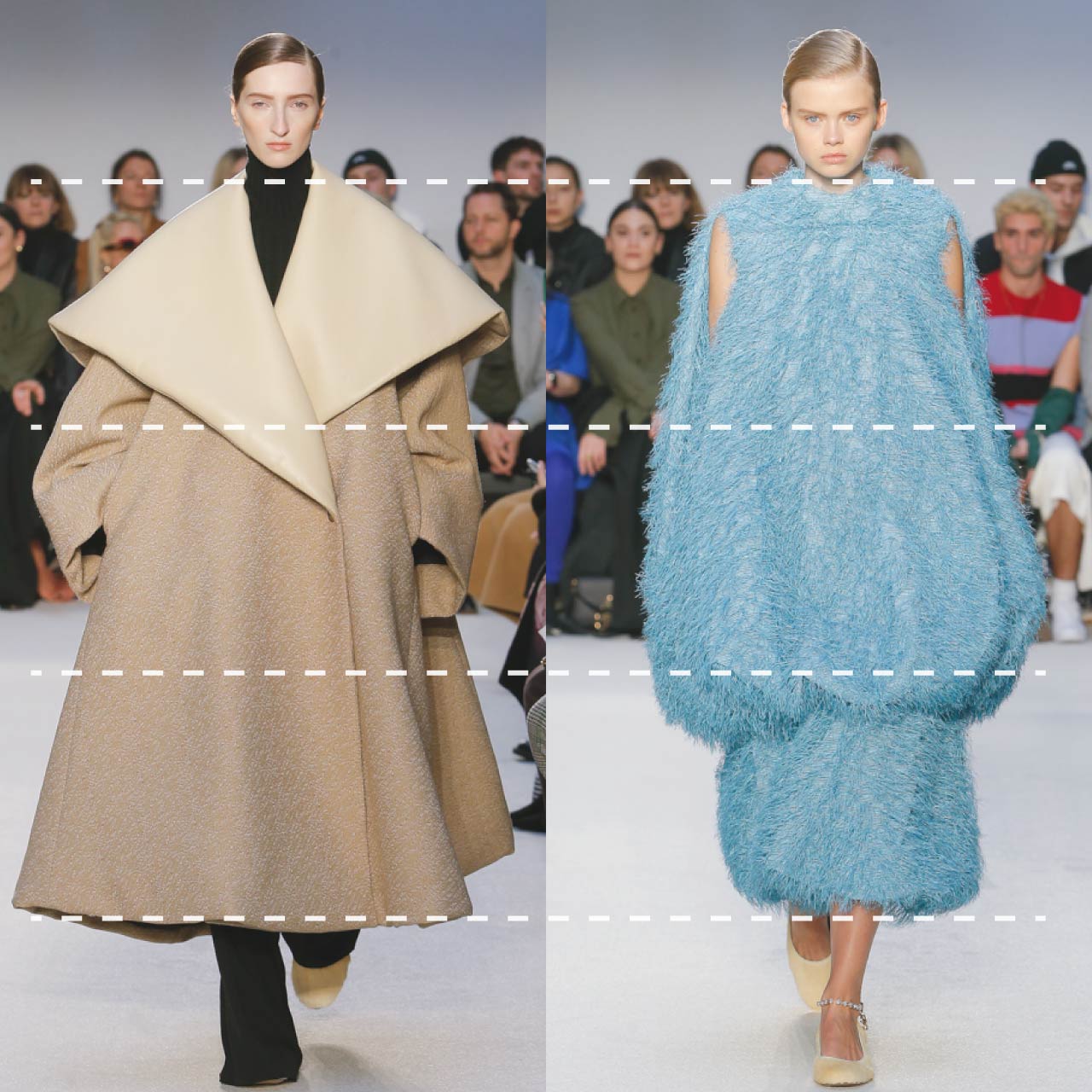 It can be a fun game (depending on your idea of “fun”, of course) to look at the proportions of the looks when you are clicking through the images on a collection. Just like the way that certain photography compositions look more pleasing to the eye based on the ‘rule of thirds’», so too do certain proportions of garments seem easier to look at when ratios of hems and colours help to make a look feel automatically resolved.

Partly this is from a purely visual perspective, especially when we are analysing clothes as static catwalk shots v.s. clothes in movement in real life. The rule of thirds in photography would typically break the rectangle of a standard image into nine segments (three horizontal parts x three vertical parts). In fashion, it is easier to think simply of dividing the look into three horizontal sections or sometimes splitting it into three vertical sections, but not necessarily both at the same time. You can then see if the dominant elements/colours/features of the garment fall into a specific area and if this helps to make the garment look balanced.

As an example of this, you can consider the boldest looks from the JW Anderson AW20 collection. The oversized looks tended to split the clothes into thirds. Sometimes with a top-heavy third (such as the strong collars used on tailoring) or a heavy bottom third (where the more voluminous styles were split and bubbled closer to the hem). 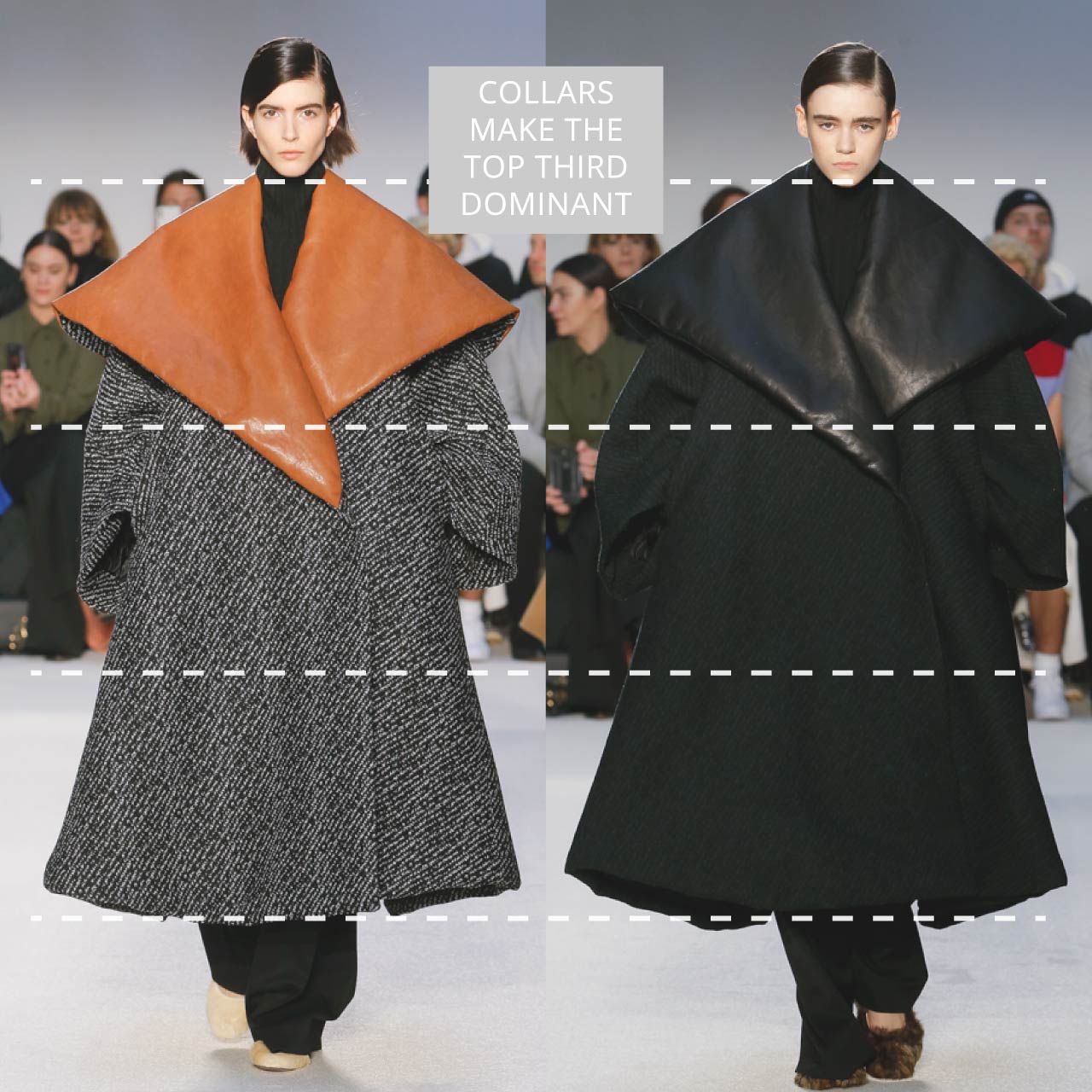 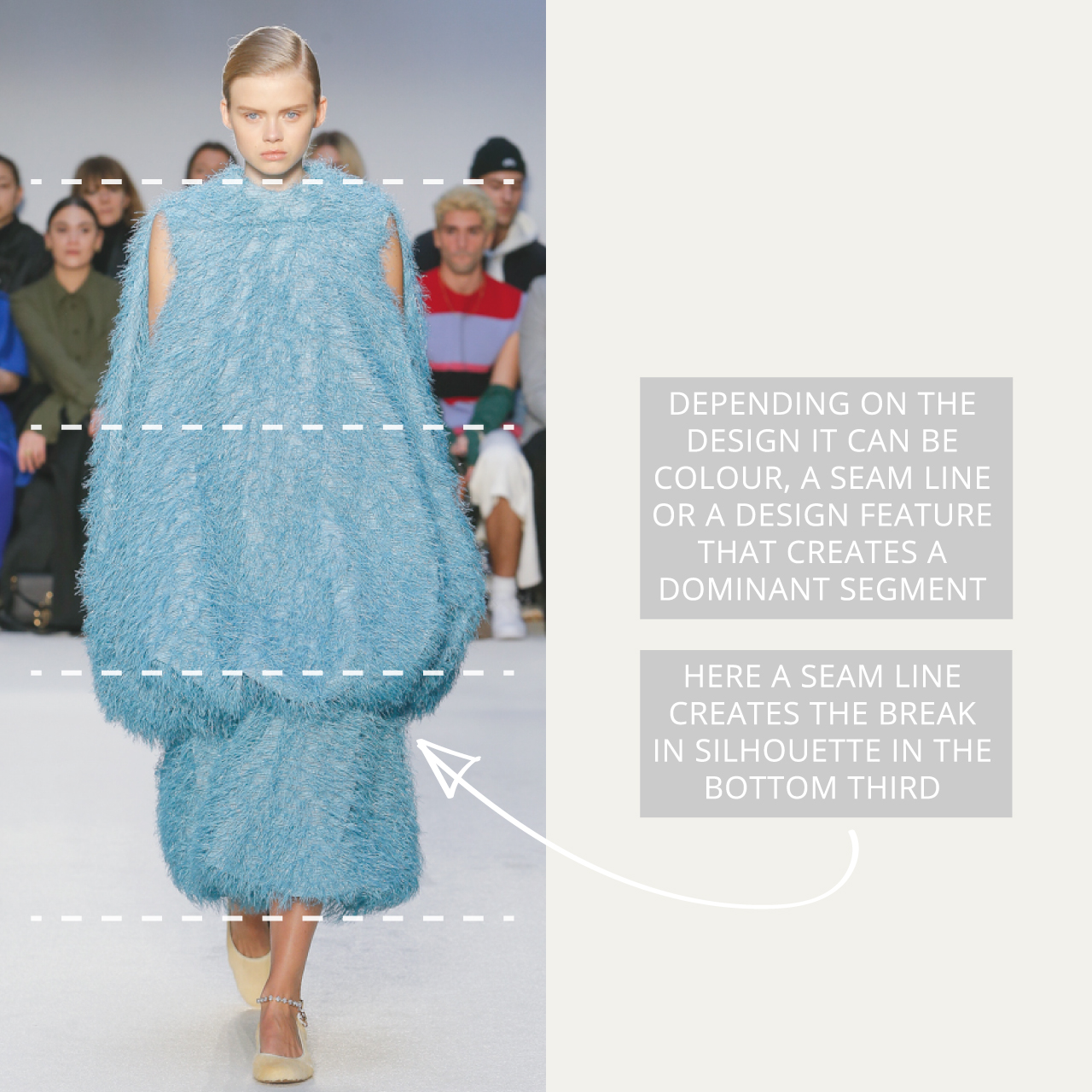 There are also other considerations about proportions for fashion, that don’t apply when appraising a photograph or work of art, and that reach beyond simple thirds. For a start, when we look at garments, we are subconsciously analysing how the ratios of the clothes interact with the proportions of the underlying body. Certain ratios make sense to us visually when we know how the body sits underneath, while other proportions may feel more jarring. Not that you have to stick to strict proportions for the look to ‘work’, but at least then as a designer, you can use these proportions to please or unsettle the viewer.

Also on a photograph centring the image can make it appear like a dull composition. However, because the body is essentially symmetrical, this affects the fact that centred designs look correct.

And the ratio doesn’t always have to be thirds, or about applying the ratio to the whole look. Some garments may have their own proportions that need to be considered. Or some looks may actually divide the body into halves or quarters. This concept of ratios is less about strict rules and more about considering how the designer is building up a certain rhythm or internal logic for how the collection works. 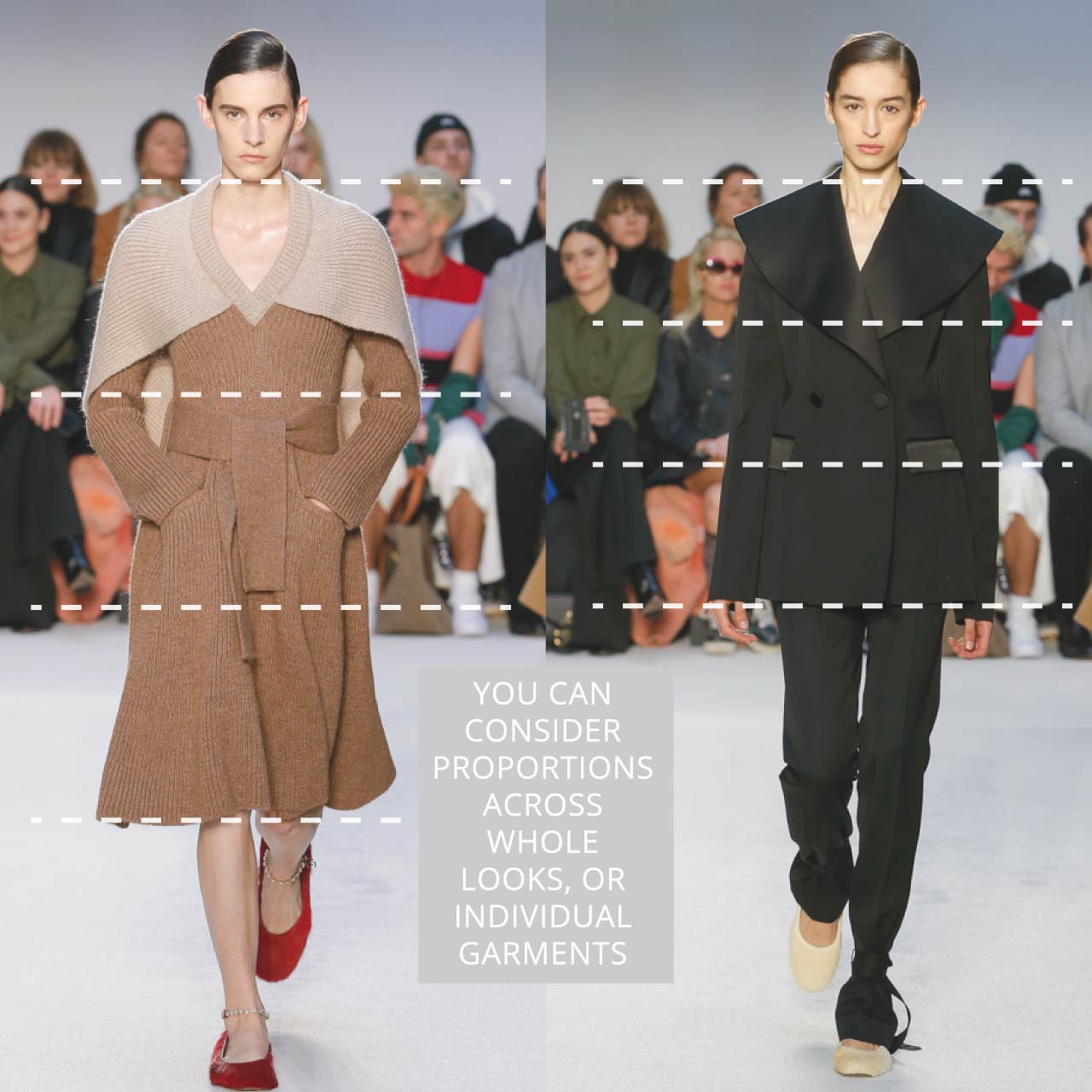 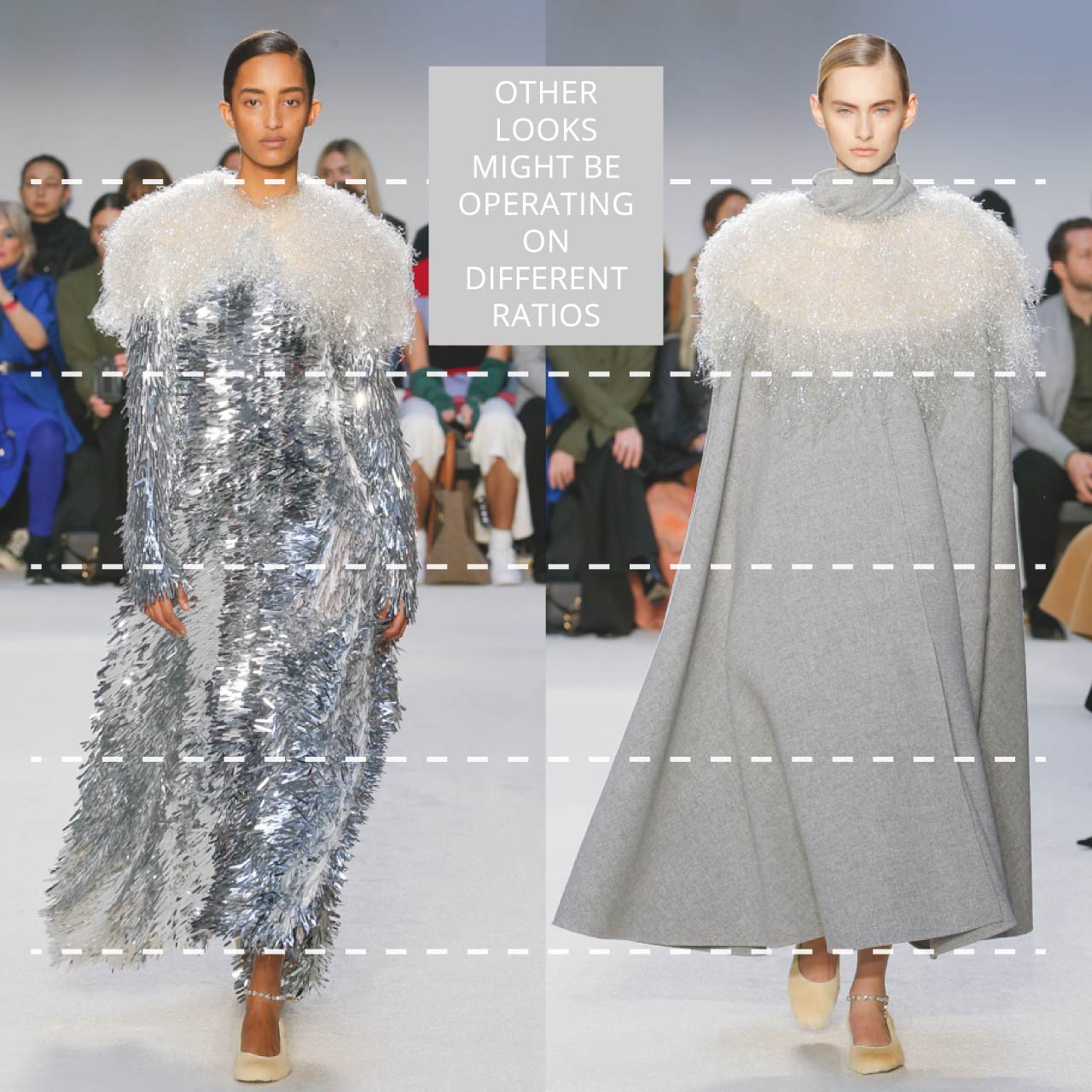 Essentially, this is all about how a designer encourages the eye to move around an outfit, in the same way that a photographer or artist has to think about how to guide the eyes of a viewer around a photograph or painting.

Classically, when you look at garments that we think of as the canon of fashion such as iconic couture designs, the eye is usually directed in quite a straight-forward manner. See how the shoulders in the top third and the voluminous skirt in the bottom two-thirds encourage you to look at the waist! See how the large jacket collar draws attention to the top third of the body! Watch as your eye flows down the body, meandering on the fancy ruffled hem in the bottom third of the dress.

In other garments where a lot is going on, the designer sometimes gives your eyes no place to rest at all. If you split the garment into sections, there may be features in every quadrant. With a mixture of colours and design features, your eyes may not know if they should be looking at the asymmetrical hem line or the ruffled collar, or the corseted waist layered over the deconstructed shirt.

Also, you may sometimes have experienced that sensation when you are looking at a collection, and there are some looks that just look out of place. They may even be in the same fabrication as another garment or use details that are already explored elsewhere, but they just don’t seem to fit. This could be because of the ratios of the looks – if the whole collection has been about thirds, then having only one look that splits the body into halves is going to look odd.