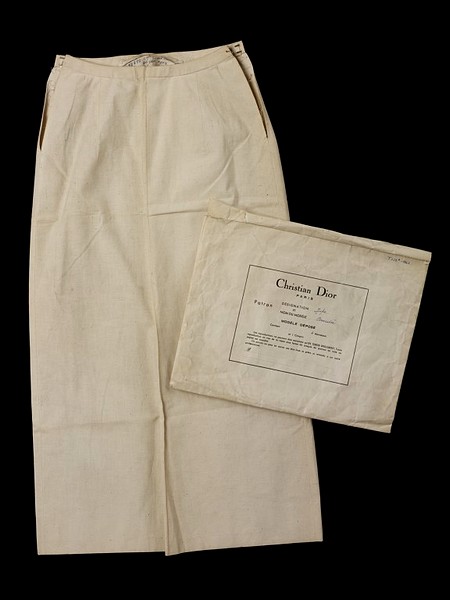 Christian Dior Toile, Made in Paris, 1954. Image from the V&A Collections».

If you’ve ever read an interview with a designer where they mention the word “toile”, then they are effectively talking about the prototype versions of their collections. Toiles are the test version of a garment before a designer makes it in the real fabric.

By making designs in plainer, cheaper fabrics first it gives the designer a chance to test the pattern, the fit, the design lines and proportion without ruining expensive fabrics, and also means that the design can be viewed in it’s purest form before print and colour distract away from any possible construction issues.

Often the fabric used for toiling is called calico, a cheap and readily available form of cotton which has not been wholly processed. Due to the fact that calico is unbleached it has an uneven appearance and a creamy colour. It can also be quite an unforgiving fabric which makes you work hard to ensure that your shape and line are correct. It is also easy to make correction markings on so that designers can redraw design lines, and do other fitting changes such as cutting into fabric or pinching small amounts out. All these alterations are then relayed back onto the pattern so that a new toile of the garment can be cut and tested. 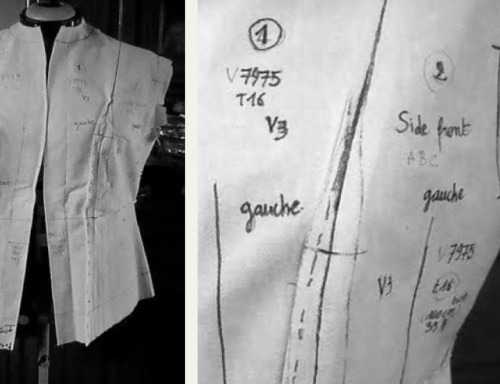 Example of a toile with correction markings from La Machine à Coudre».

Calico is not always a suitable fabric for toiling all garment types, and you should choose a fabric which represents the weight and handle of your final fabric. For example if you are creating a dress in a heavy jersey then calico will not give you any indication of how the final fabric will drape, and you are better to use another cheap jersey which will fall in a similar way.

Toiles are also used in haute couture to enable a version of the garment to be individually fitted and tailored to the clients body. Historically, toiles also represented a way for the couture houses to license out their designs.

Text from the V&A in relation to the Christian Dior Toile pictured above:

The traditional focus of couture was the creation of high fashion garments for private clients. However, sales to department stores and wholesalers became increasingly important after the war. Buyers purchased fabric toiles such as this, paper patterns, or even original models which they copied. These designs could only be copied a limited number of times.

Some designers created ready-to-wear collections specifically for the export market, using the mass-production and sizing methods developed in the USA. Christian Dior (1905-57) was a shrewd businessman and one of the first couturiers to establish international licensing and reproduction contracts with other companies. By 1948, a year after launching his house, Dior opened on Manhattan’s Fifth Avenue. ‘The dresses will be designed with one eye on US tastes and the other on the limitations of machine production,’ wrote Time magazine on 16 August 1948.

Below are more examples of toiles from around the same era: 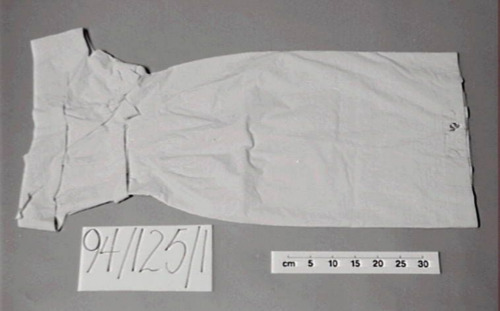 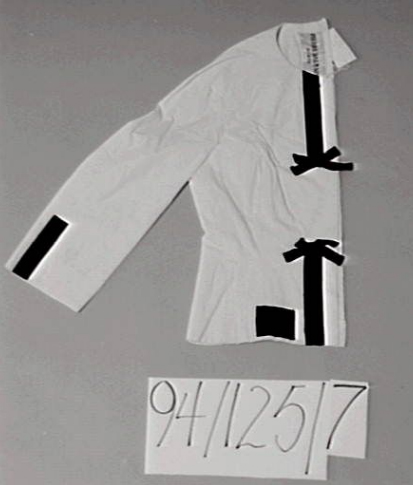 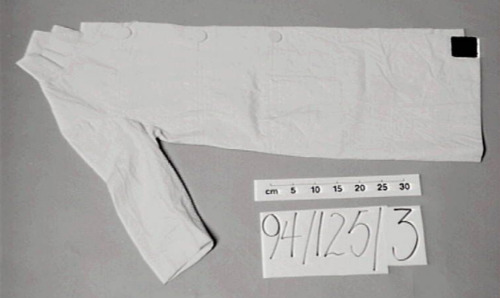 Pierre Balmain, 1947-50. These toiles were supposedly bought in Paris by a buyer from Myer Emporium in Melbourne, Australia. The black square in the 3rd image is a square of black wool, possibly as a sample of the original fabric. Images from PowerhouseMuseum»

After a catwalk show the buyers will be able to view the sample range in order to make their final order on the season. For some designers, another fitting will then be done on the sample garment in order to make final changes before production. After this there may be multiple groups of garments all called “samples”. These include names such as, preproduction samples, press samples, production samples, shipping samples etc depending on which department uses the garments and at what stage in the production process they have been made. The fact that so many different samples of the one garment is made during the process of promoting a garment and getting the design ready for manufacture is the reason why designers have “sample sales” in order to help recoup some of this cost.