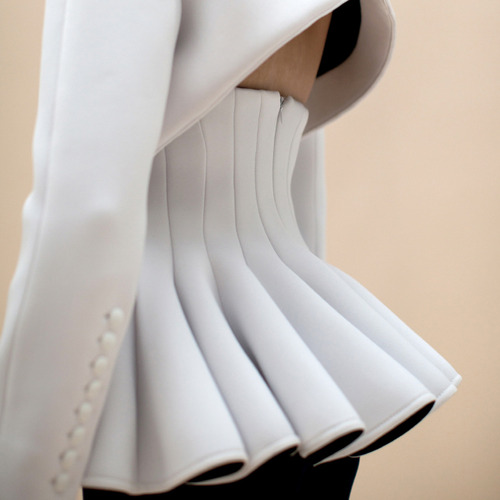 In a bid to remove bulk from garments we often try to create patterns with less seams and less seam allowances but there are also times where the positioning of seams, and their seam allowance values, can be used to reinforce the shapes and silhouettes that we want to create.

In this image from designer Robert Wun, paneling is used to create a ripple effect where the inward fold of each ripple is designated by the location of the seam line. 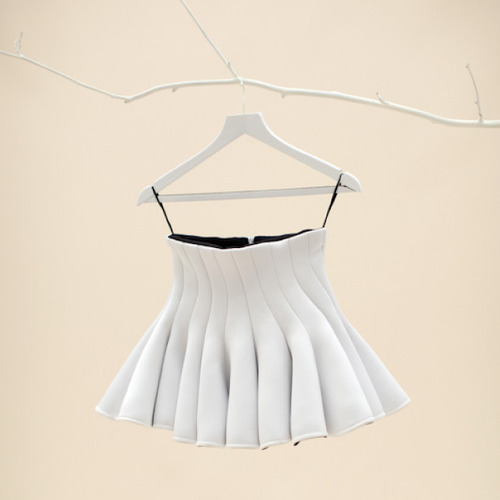 In essence each of these panels will have a shape that roughly resembles the pattern diagram below: 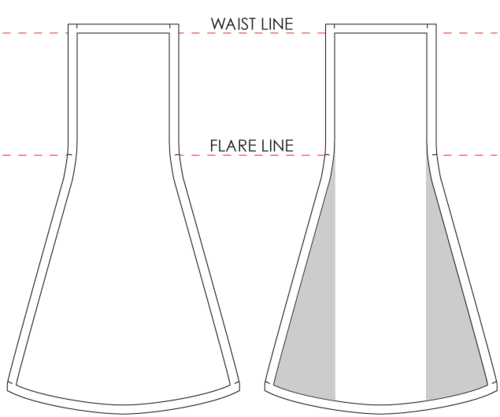 The greyed out sections of the pattern piece on the right highlights the section of the pattern that will essentially fall into the folds of the skirt, or to represent the amount of “flare” that you are adding to each panel piece. In reality the patterns could be more or less pronounced than this depending on the shaping that you need.

The decision of what to do with the seam allowance values in situations like this is especially important and is worth testing on a small scale using the real fabric before you finalise your pattern. Particularly in cases where the fabric used is as thick as the neoprene used in the Robert Wun skirt, the thickness of the fabric will accentuate any decision about the construction of the seam.

The examples below discuss the use of basic seams and their open or closed seam allowances, so you may want to reread the post Fundamental of Sewing: Seams» if you are unfamiliar with these terms.

Depending on the silhouettes you are trying to create, one choice would be to sew the seam as a basic seam and allow the seam allowance to sit closed, without attempting to press it to one side, and without attempting to press it open. In the case of the Robert Wun skirt this technique may have been used to help to reinforce the shape of the ripples. 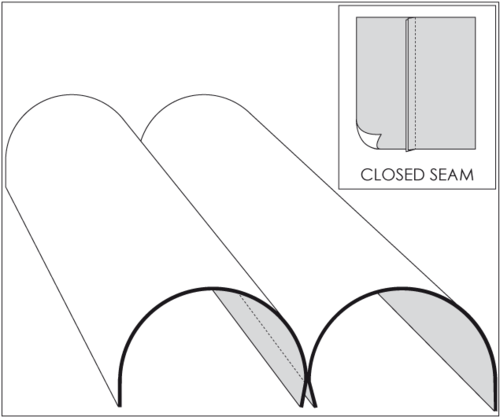 Another option of how to treat the seam would be to sew the fabric as a basic seam and press the seam allowance open. Using an open seam allowance in a thick fabric will help to create a softer wave in the fabric. 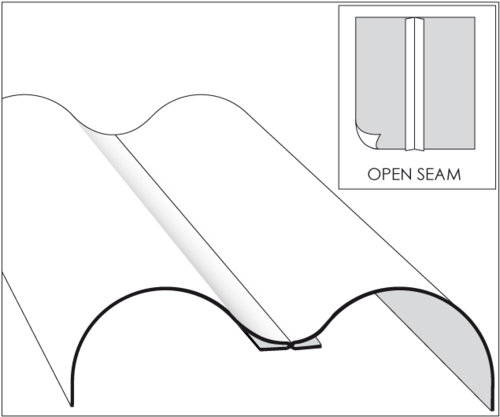 In the case of a thick fabric choosing to press your seam allowance open could be problematic as the seam may rebel against all your best attempts to flatten it. You may be able to flatten some fabrics by sewing additional lines of top stitching on either side of the main seam line to help to hold the seam allowance in position, however this may not be the look that you want for your garment. 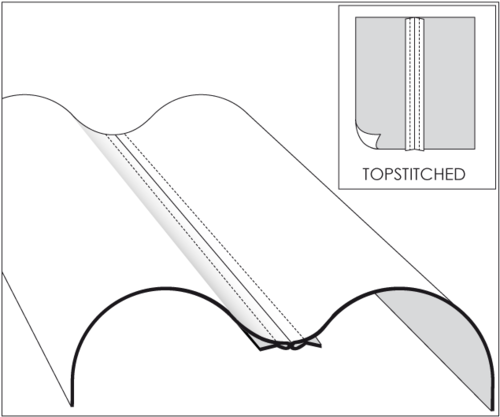 In a fabric such as neoprene you could also sew a version of a lapped seam because you will not need to worry about the fabric fraying. This technique would be useful in a situation where you want to reinforce the flatness of the seam, and don’t want the fabric to have to fold back on itself to create the seam. This effect could also be very useful for leather designs as again you do not need to be concerned about the fabric fraying. This would have a similar effect as the open seam, as it would help to create a softer wave line in thick fabrics. 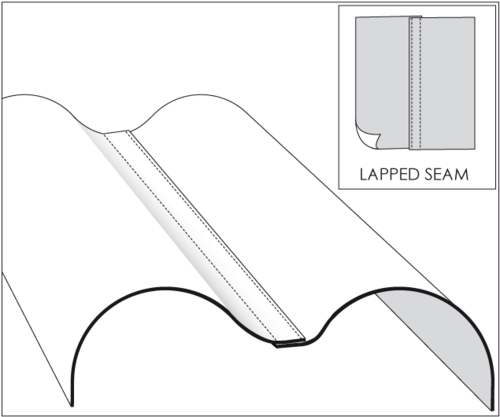 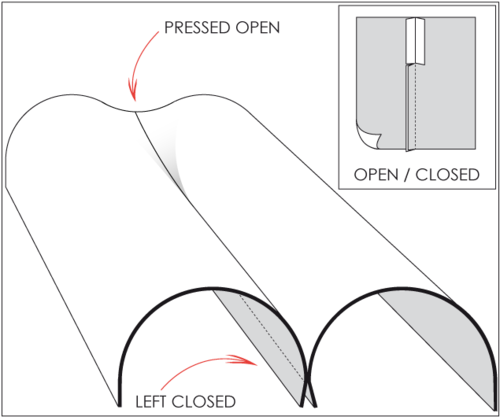 The skirt is from the Robert Wun graduate collection “Burnt” from 2012. The following are a couple more images from the same collection. 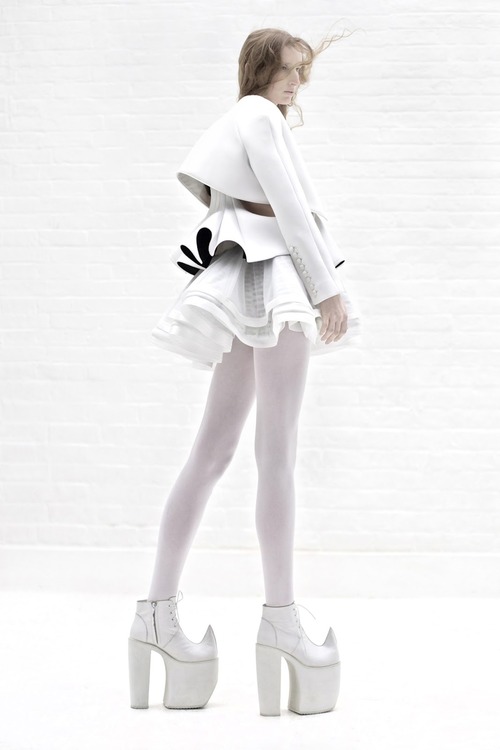 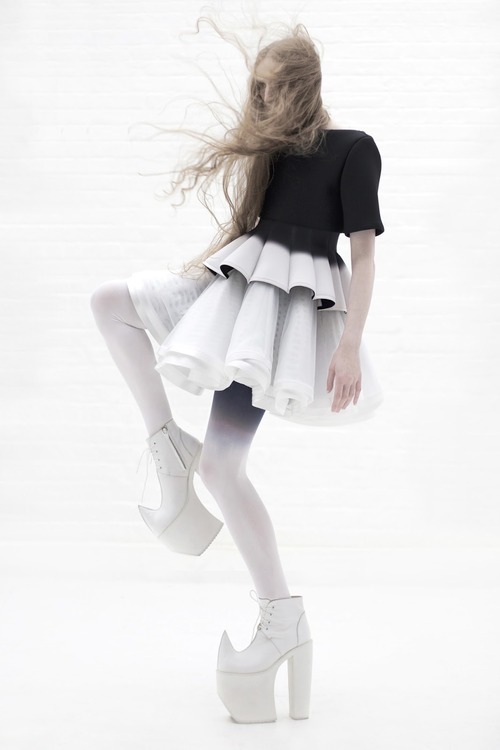 Diagrams of seam allowance by The Cutting Class»