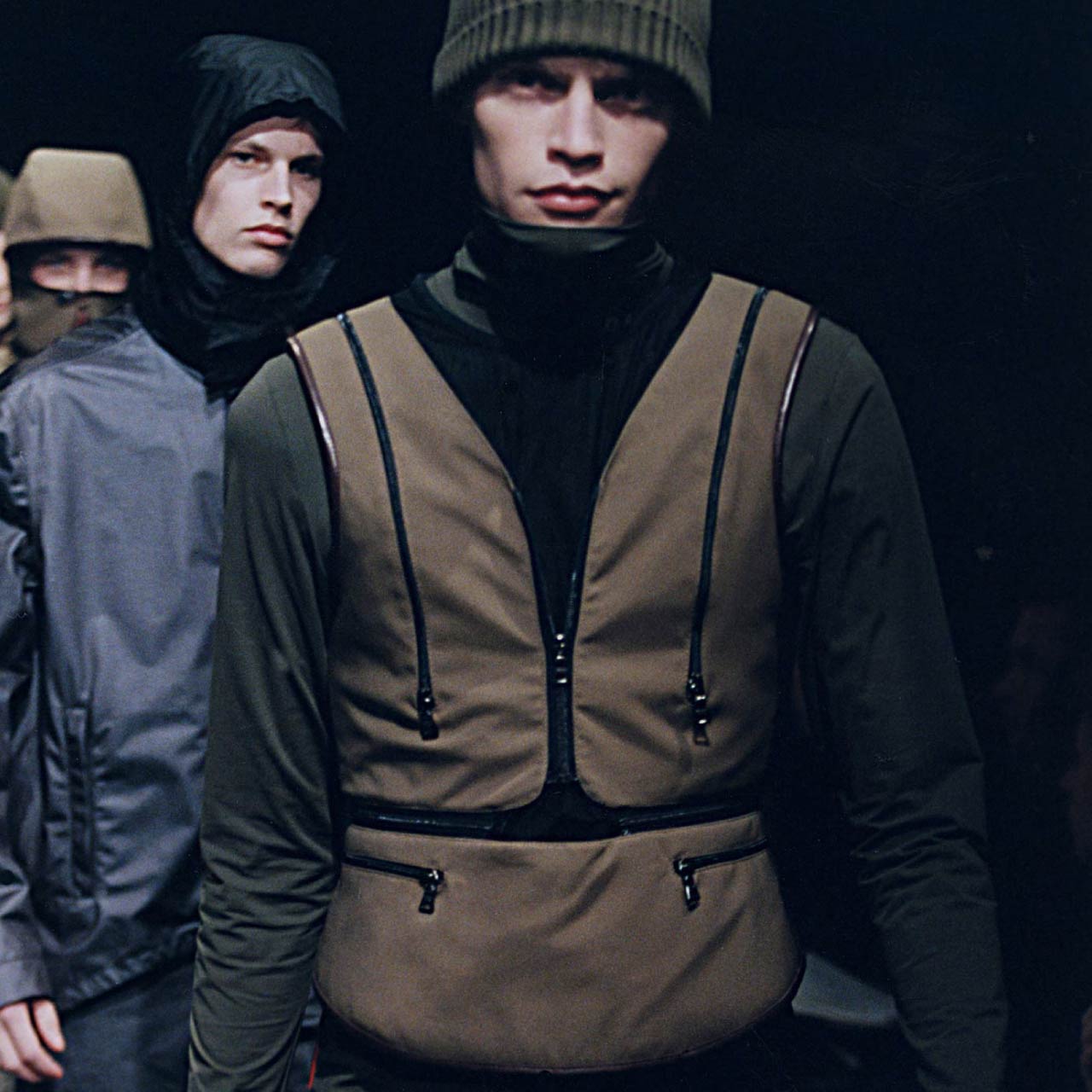 Sometimes you see an image pop up and even though it’s from a collection that’s 20 years old, you feel like the garment could just as easily have been created for a new collection. Such was the case when an image of zip details from Prada AW1999 appeared.

In this collection, the zips have a great linear quality. Sometimes splicing through bulletproof vest style garments to create garments that are made up of stiff plates. Sometimes the zips were tracing down from the top of a collar to the bottom of a sleeve, allowing the garment to open up as temporary slits. And sometimes the zips were also used horizontally and vertically to create accents, wrapping around the waist of one model, or splicing up and down to create pockets.

Sometimes it’s easy to think about zips as just being zips, but of course, you can use various combinations of zipper tape and zipper fixings for different functions. Where the zips are used here on the bulletproof vest style to create the body plates, they would be open-ended zips so that they can be opened up where needed. Similar to the style of zip you would see on a hoodie, where the two halves split away from each other.

The zips that are placed through the centre of panels or used for pockets are more likely to be regular single zips, or double-ended zippers. Double-ended would be similar to what you would expect from a sports bag where you could open the zip from either end.

Also, it’s nice to see how some of these details were echoed in the womenswear collection, even though they were a more backgrounded detail in the context of the collection. In the case, of the vest style, it is given a completely different feel when cut for womenswear given that the front can be opened to reveal a sheer underlayer. Also, the horizontal zip becomes more cinched around the waist, turning the bottom panel into slightly more of a peplum. It’s also likely that the vertical zip lines that run over bust point on the womenswear style, is also where the dart value is hidden, taking in the dart value in the same way that a princess panel line» would work. 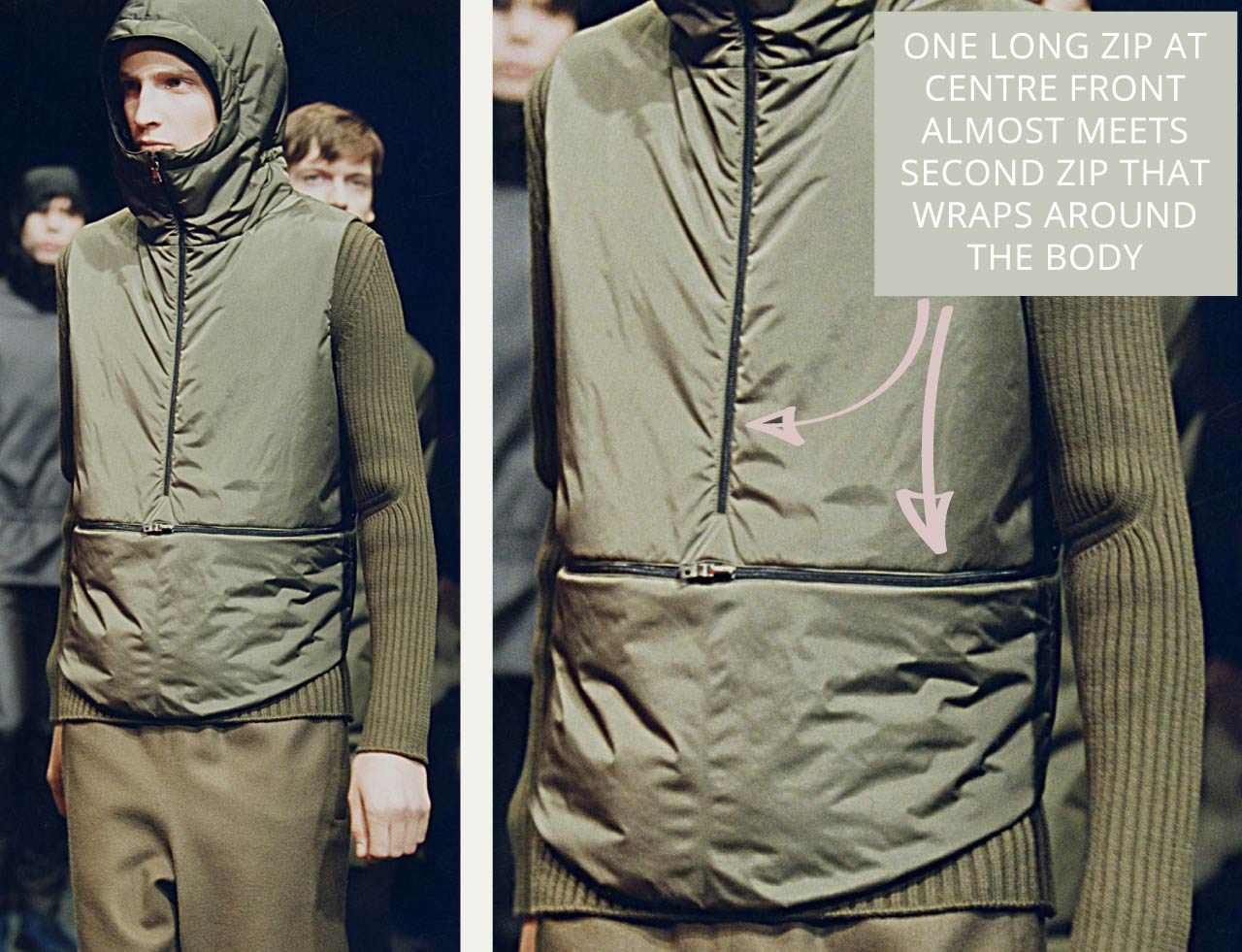 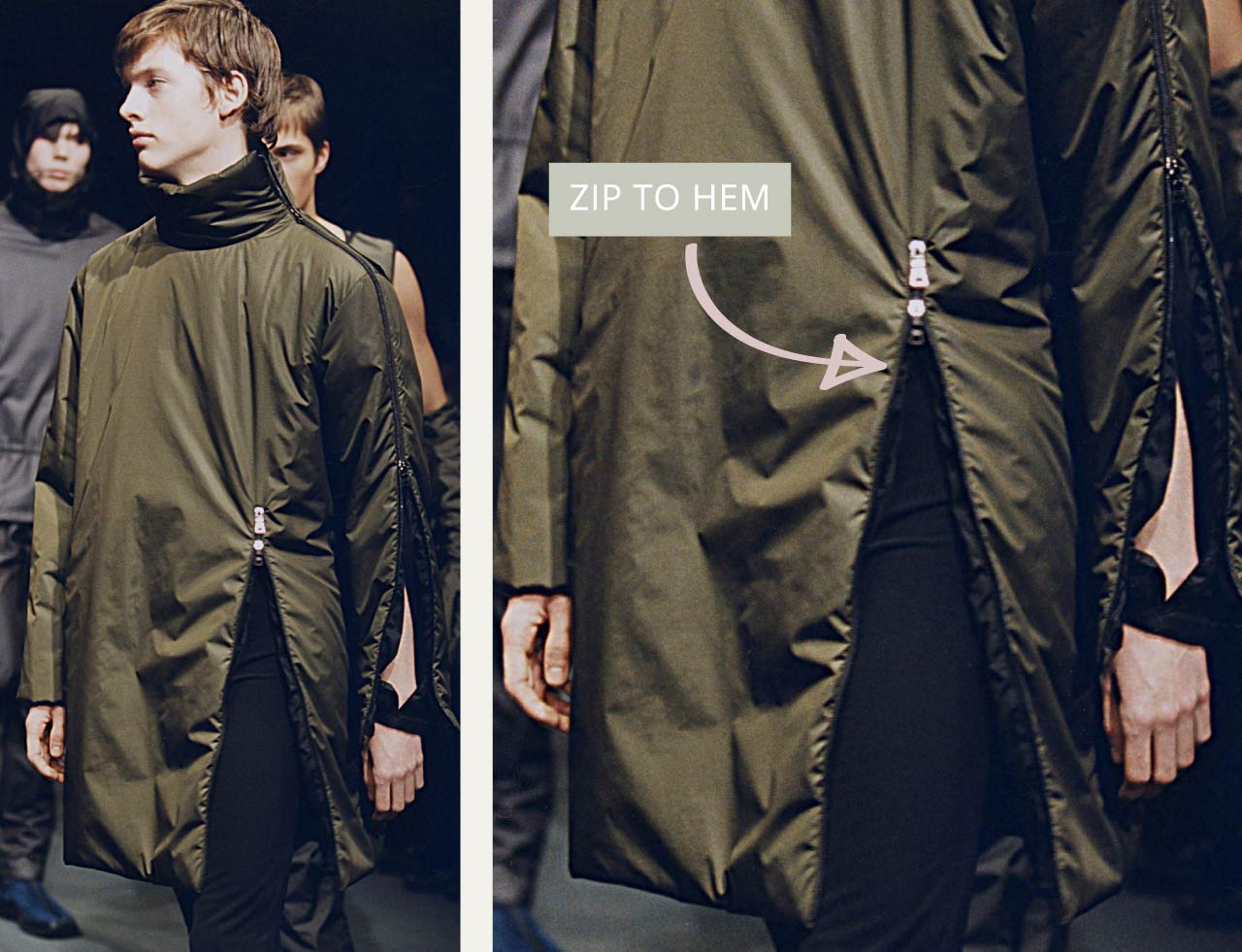 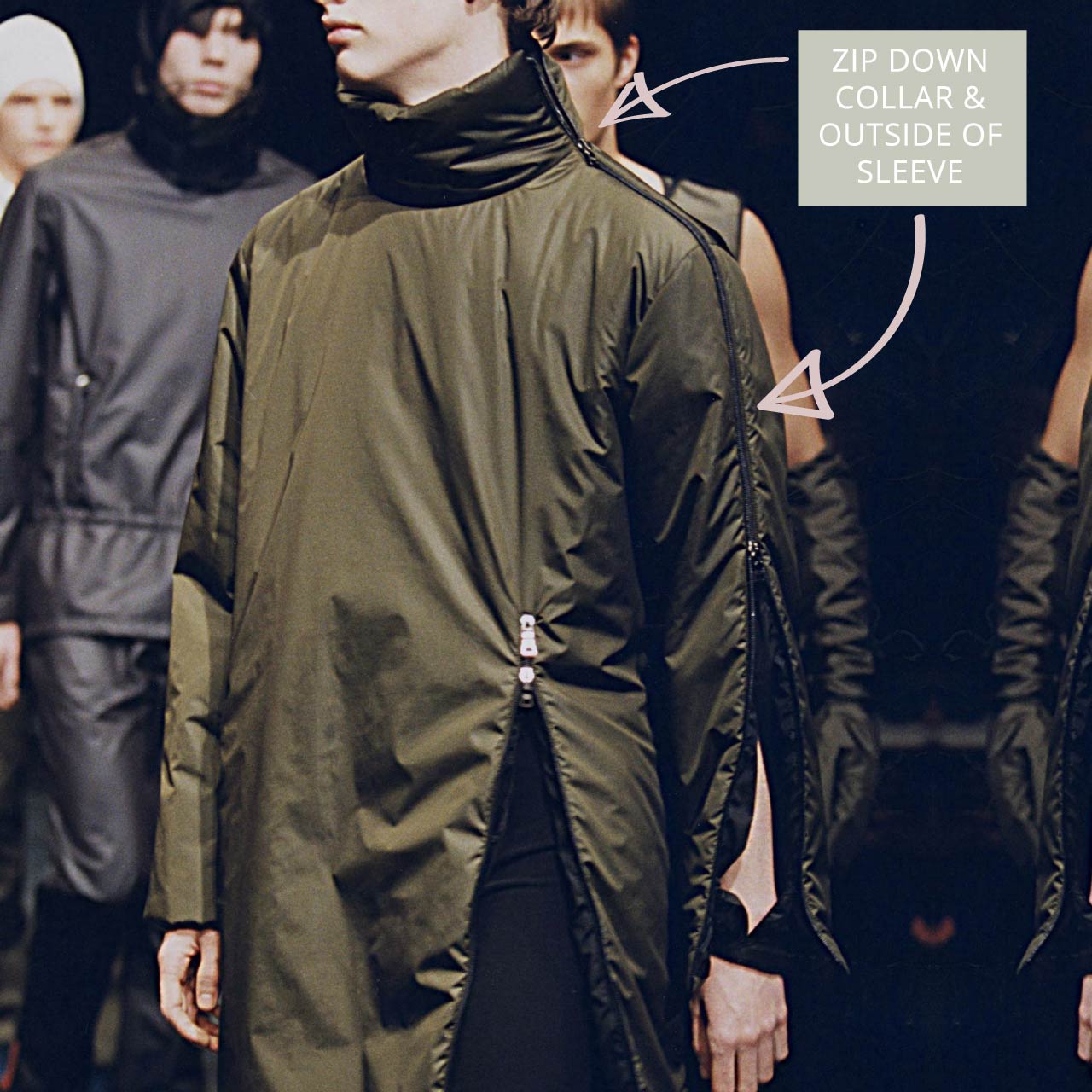 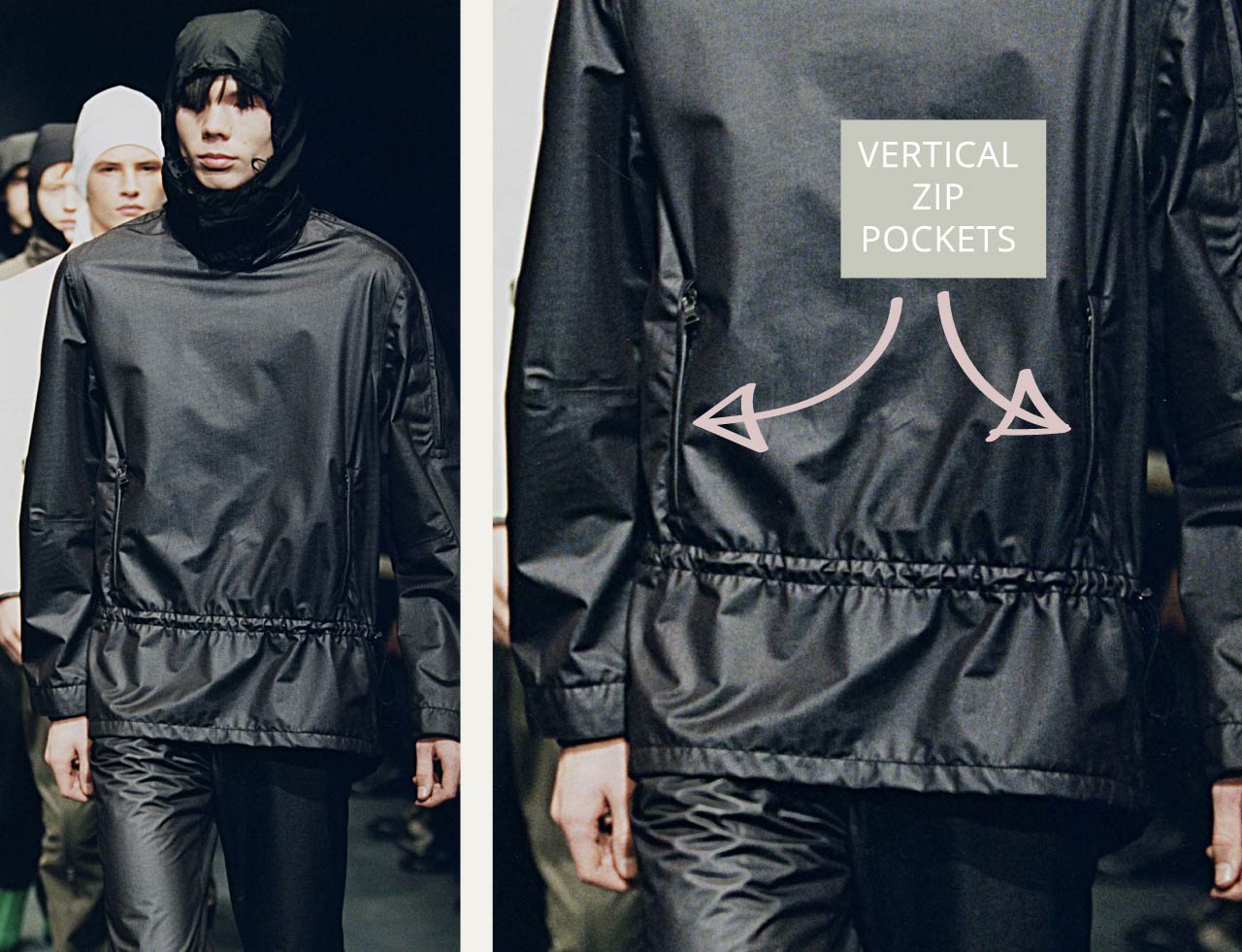 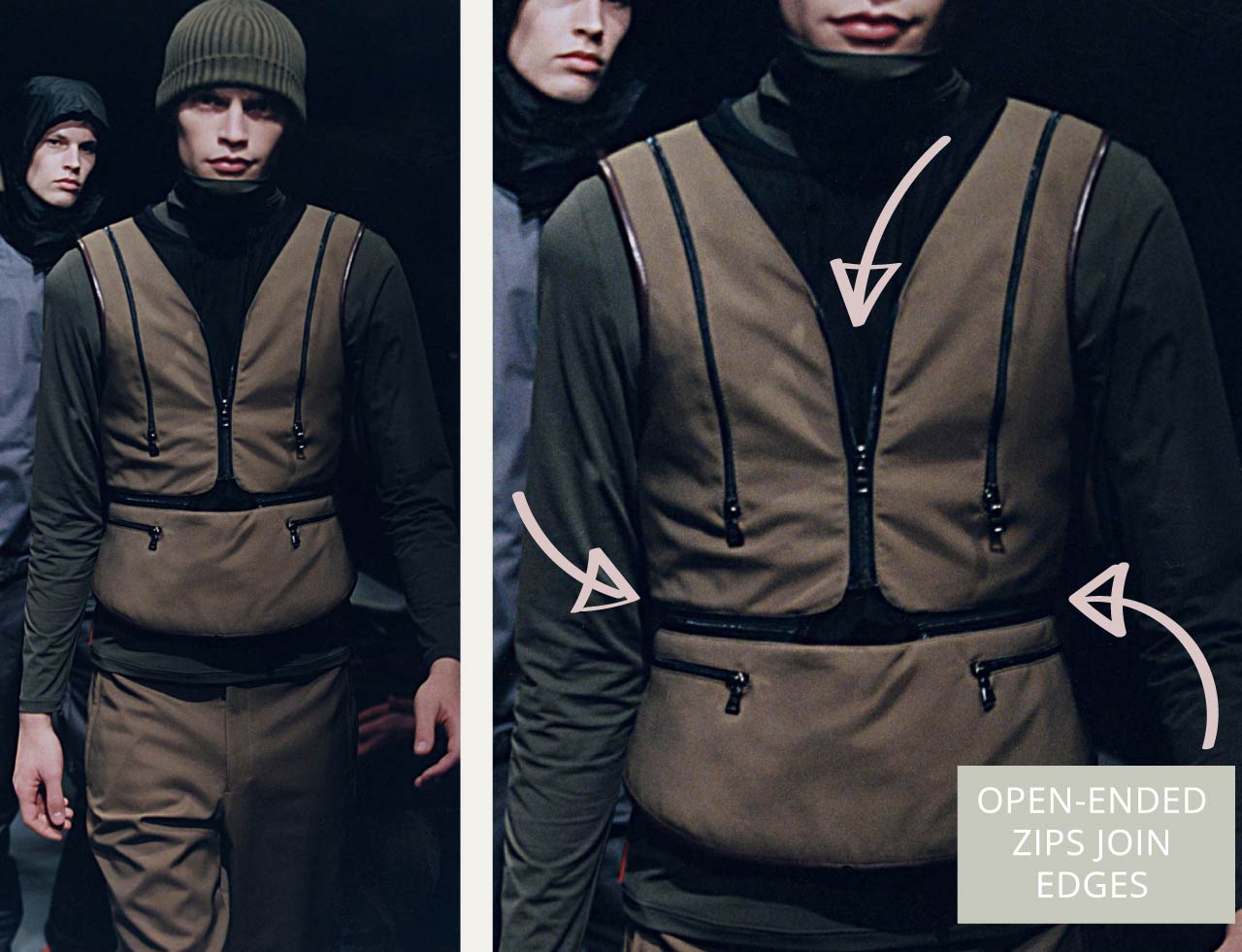 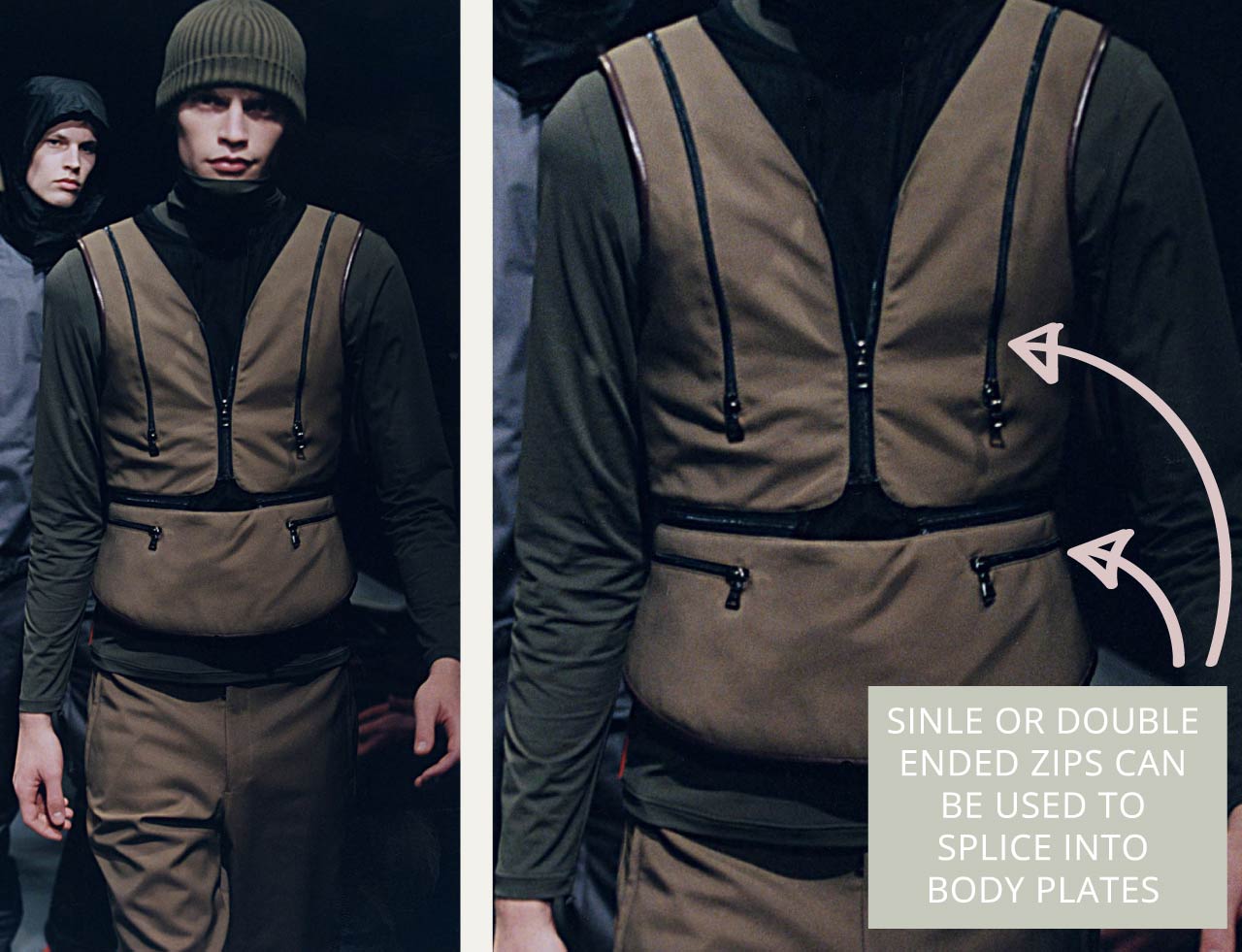 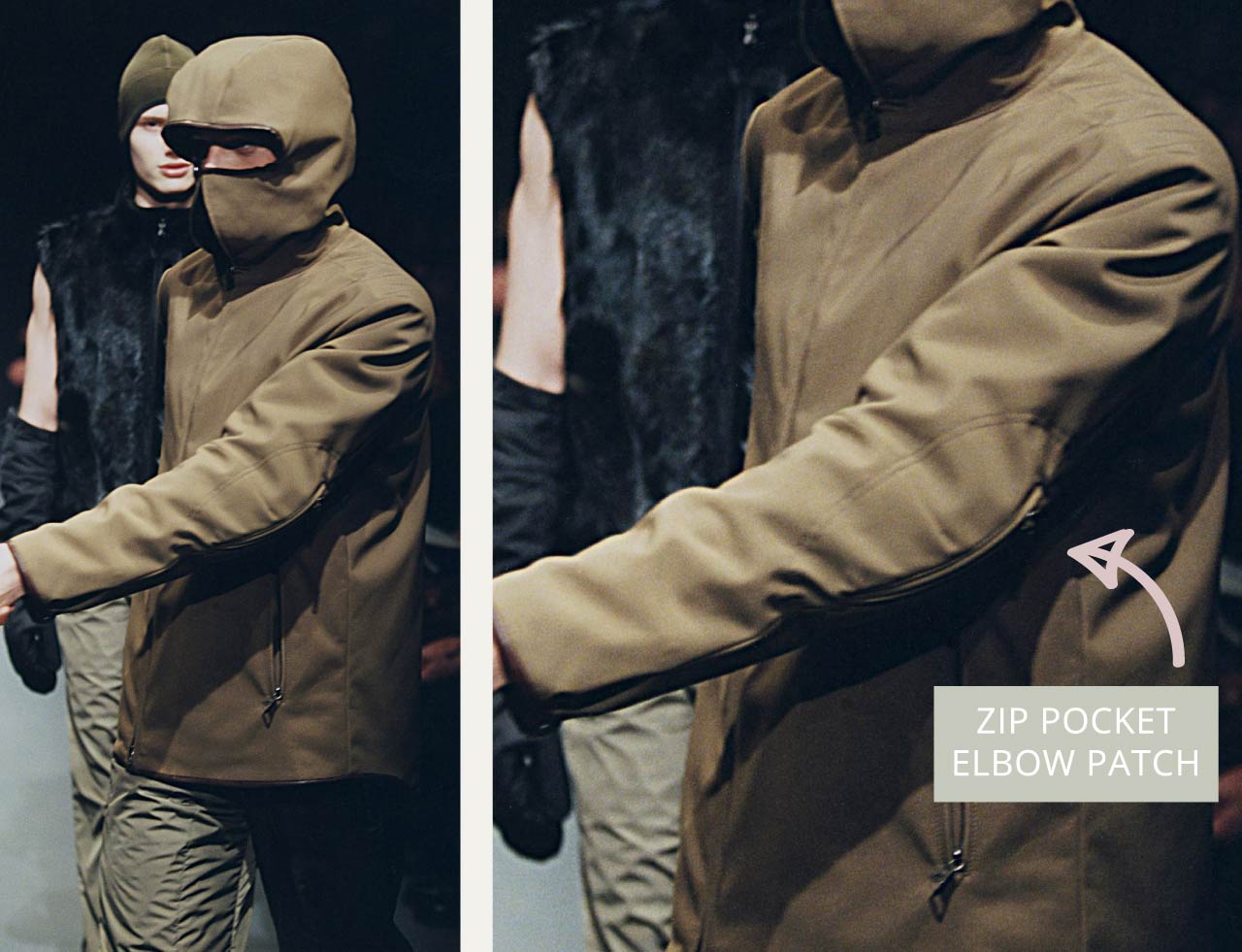 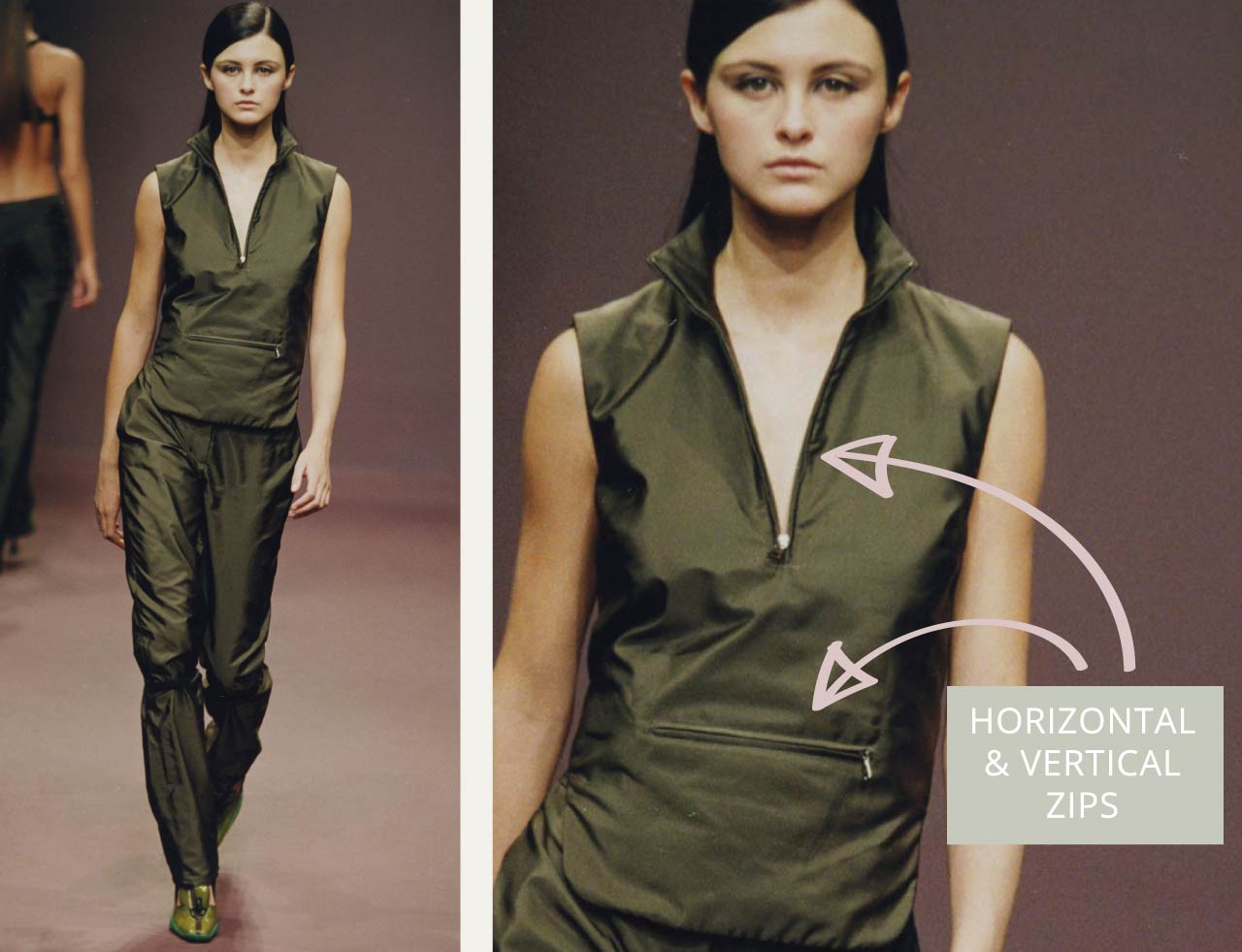 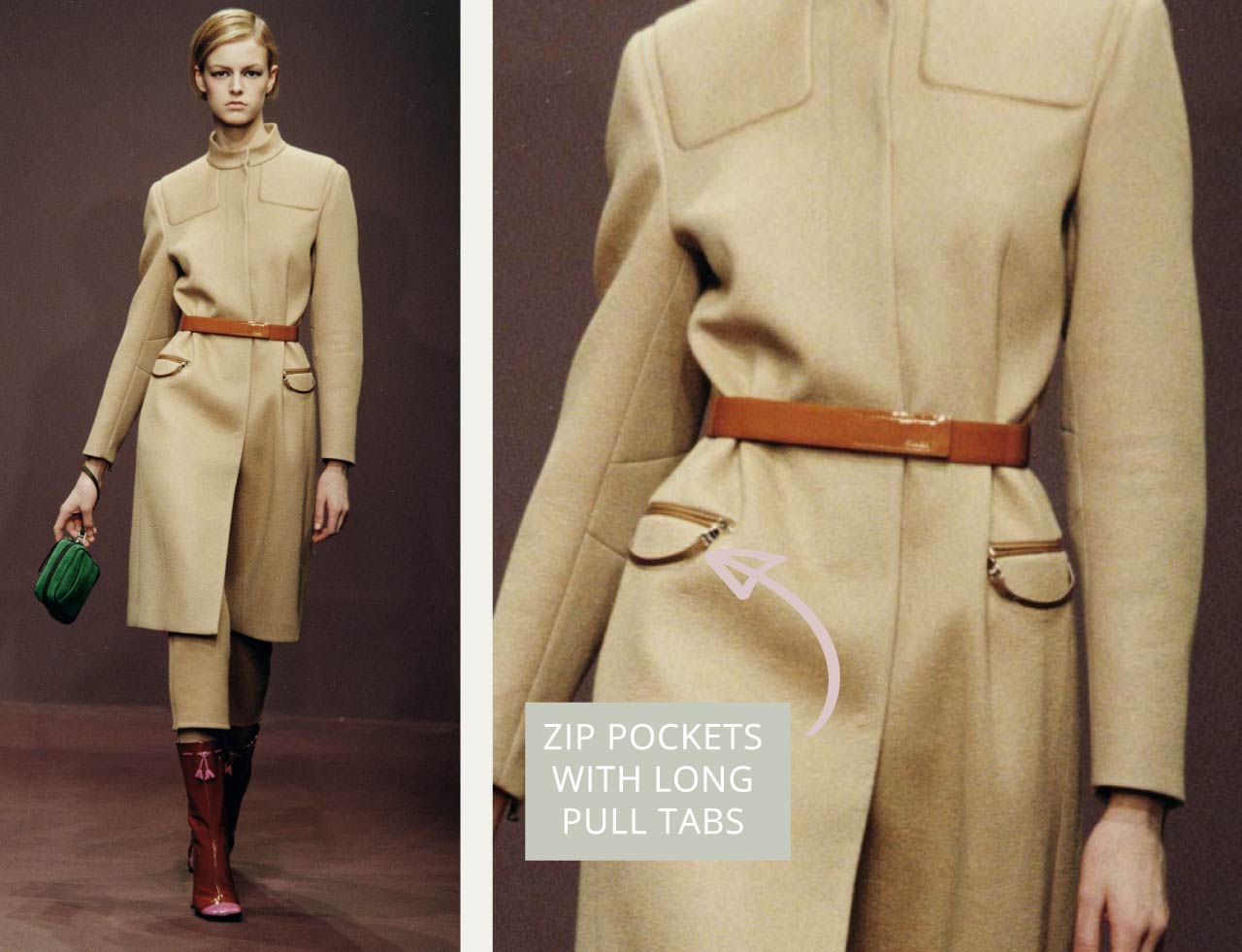 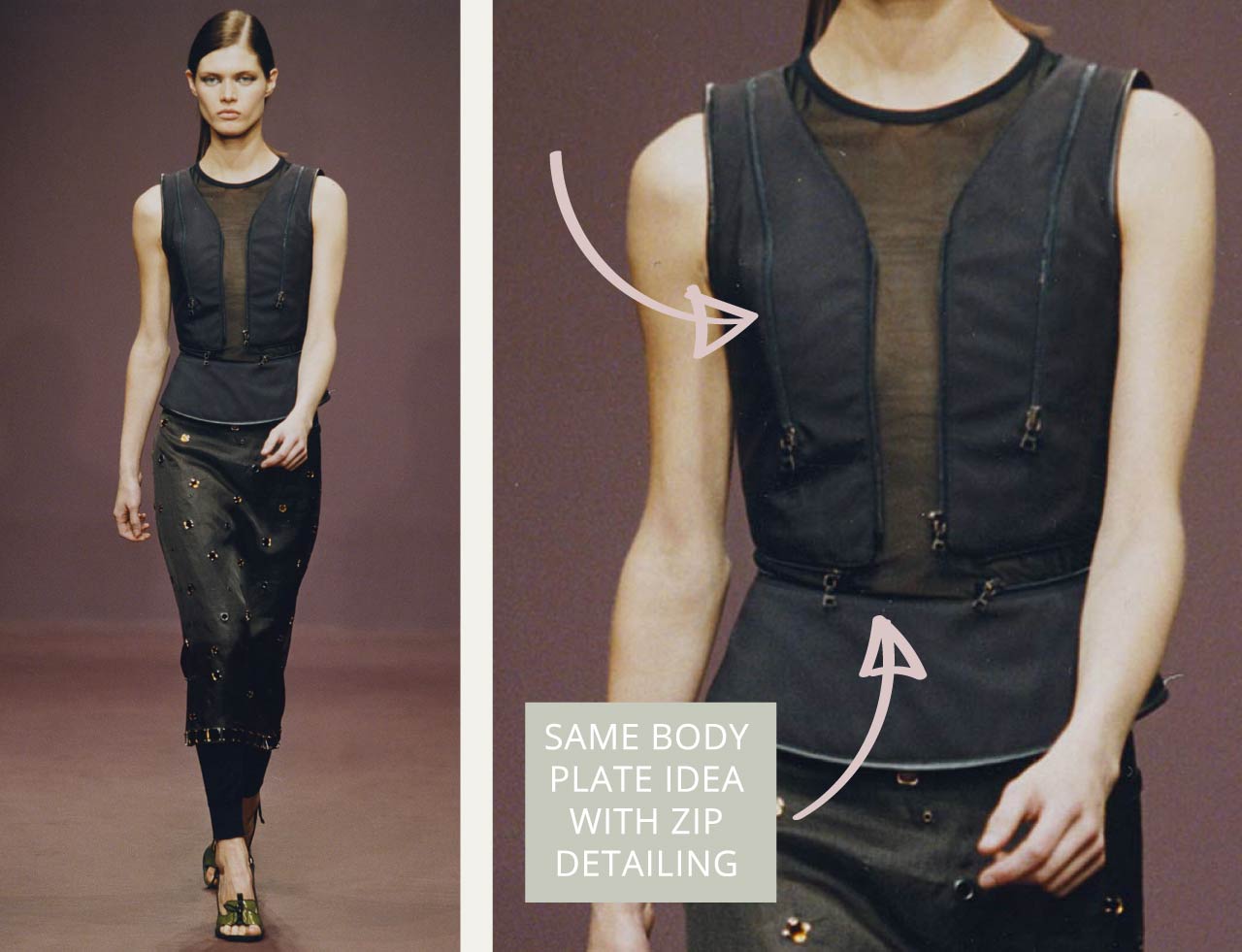 Images of Prada AW1999 Menswear» and Womenswear» from the Prada archive on Prada.com.